History is a series of stories told by many voices. While each community will have its historical collections, we find the capital cities will usually be the location of the state museum. Here we can gather a better representation of what has transpired, on a grander scale. Our only previous Wisconsin visit had been to Kenosha, so this stop would give us a better grasp on the entire region’s past. Making our way toward the Wisconsin Historical Museum, in Madison, had brought us directly in front of the state capital. With the glistening white dome for a backdrop, we were ready to explore the path that led to the present. The Wisconsin Historical Museum is nestled in a multi-story building on the capitol square. Visitors can begin on a higher floor, which takes you back the farthest in time. The early days of settlement, in Wisconsin, were comprised of fur trading and lead mining. As immigrants flowed into the state, they brought with them their customs and skills. Learning to coexist in nature required the construction of communities, which surged with even more newcomers. It was an abundance of natural resources that drew the first settlers to the area. As the state grew in population, word got out of the impressive natural beauty that could be found here. Tourism would blossom in the late 1800s, as affluent citizens looking for ways to escape their urban settings. Hunting lodges and fishing villages became meccas for sports enthusiasts. The Wisconsin Dells would draw throngs of visitors with its surreal landscapes. When the automobile finally arrived on the scene, it increased the availability of access to these recreational sites. 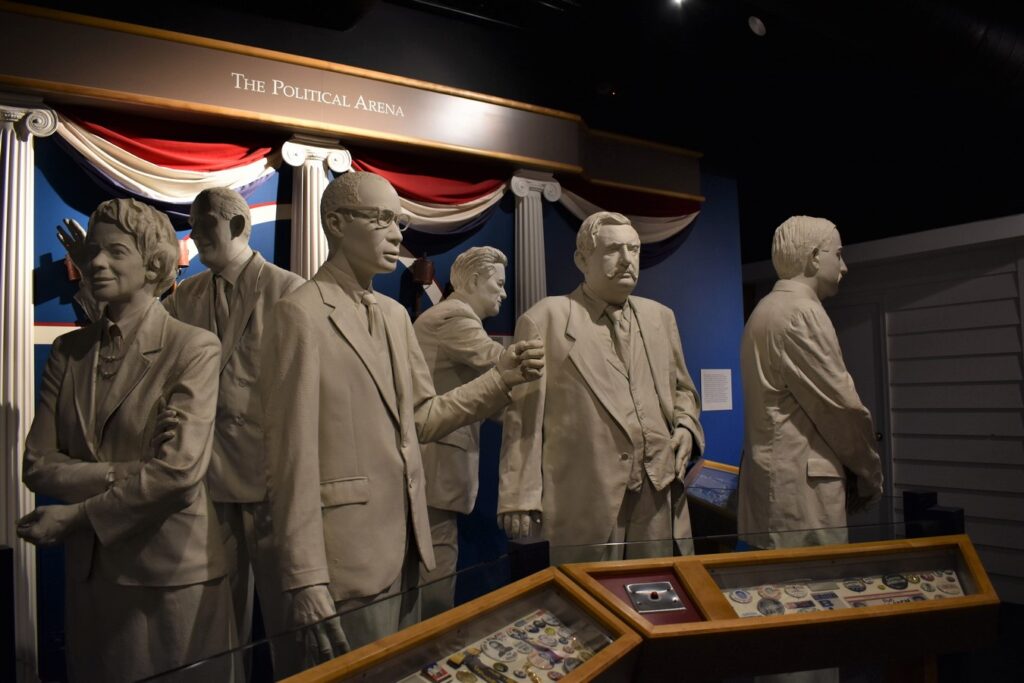 During this same timeframe, the landscape was also changing on the political scene. All of the big business growth would lead to the rise of an oligarchy of wealthy businessmen. Wielding their riches as a motivator, these business leaders influenced the political leaders to create policies that favored industry. By the late 1880s, the state had reached a tipping point, which would require reform to correct. 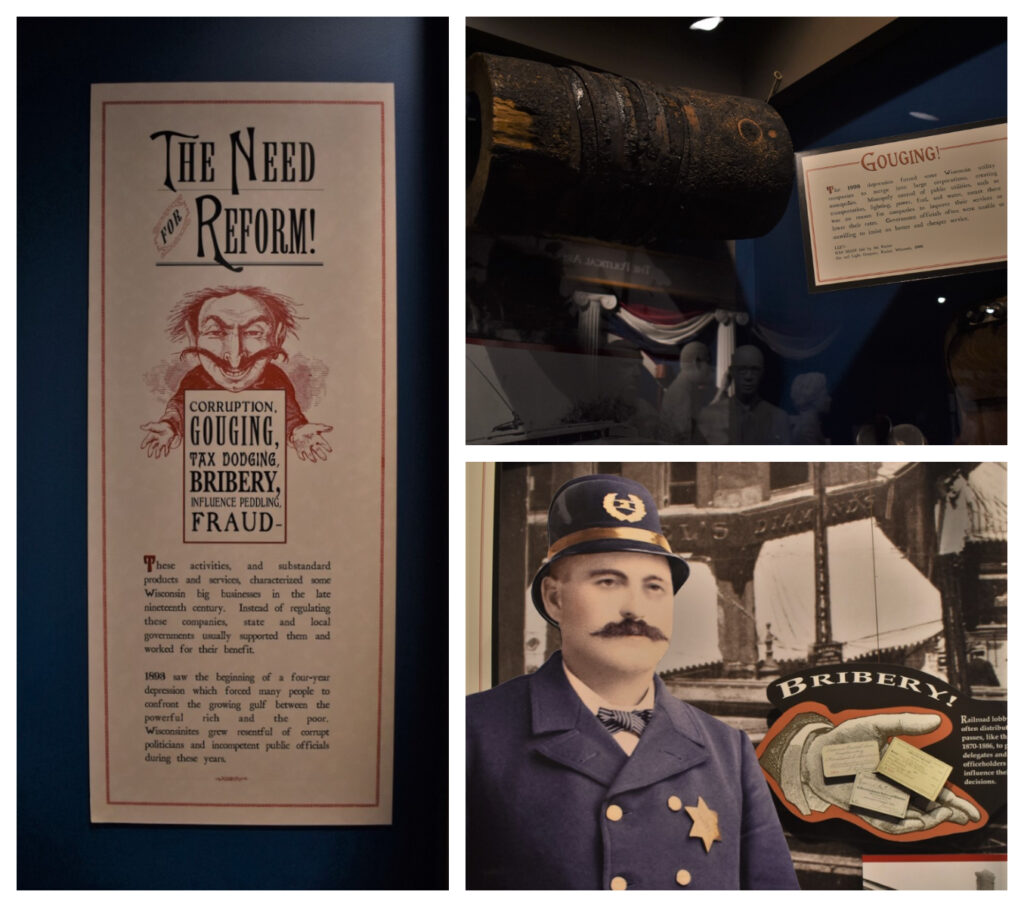 As we made our way through the displays, the history of Wisconsin politics was laid bare in front of us. By the later part of the 1800s, the dynamics of the state had changed drastically from its agricultural beginnings. The explosive growth of industry and technology fueled the rise of city populations. Dangerous working conditions and poor pay were commonplace. The voting public demanded reform and this ushered in an opportunity for ‘Progressives’. 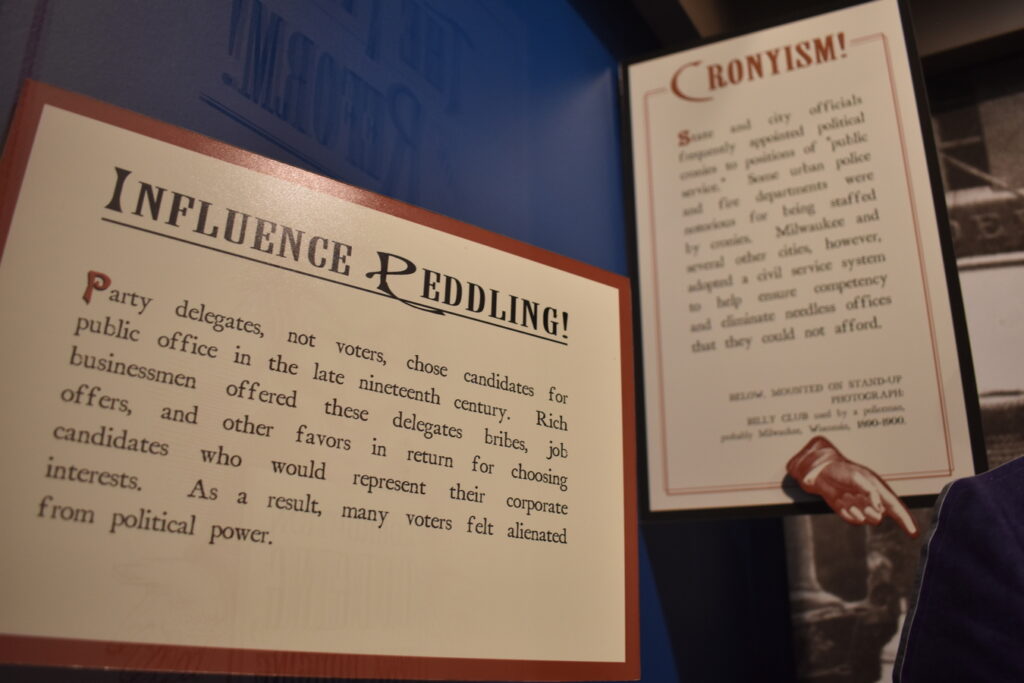 In 1891, a political leader attempted to bribe attorney Robert La Follette, to fix a court case. This infuriated the lawyer, who became a leading force in the movement to reform the political landscape. La Follette spent the next few years traveling the state to speak out against the corruption that came from lumber and railroad barons, as well as corrupt politicians. In 1900, he was elected governor on his pledge to bring reform to Wisconsin. Within a few years, progressives had won races in a variety of political positions. With this newfound support, La Follette was able to institute changes that broke the painful hold of corruption. While the Wisconsin Historical Museum has plenty of details about political issues, it also provides a glimpse at other aspects of daily life. An annual event that draws visitors from far and wide is the Wisconsin State Fair. This event began in 1851, which is only 10 years after the first fair in America began in New York. Since its origin, it has only been canceled six times. The early days focused primarily on agricultural activities. Over the years, it has expanded to include entertainment events that range from musical guests to a carnival midway. In 2011, the Guinness Book of World records certified the world’s largest Cream Puff. We have to wonder how many people were able to get a taste of the 126 lb. creation. Our tour of the Wisconsin Historical Museum opened our eyes to a wide array of stories from the past. This FREE museum is a great start for gaining a perspective of the progression of advancements in the state. Armed with all of this newfound knowledge, we were ready to head out into the city for some in-depth exploration. Madison has the distinction of being the capital city, as well as home to the University of Wisconsin. With so much to see and do, and all easily walkable, we knew this visit was going to be historic. While we may not be badgers, we can certainly appreciate the laid-back vibe of this city. Have you ever visited Madison, Wisconsin?