Rolling down Route 66 in rural Missouri brought us to the pun-filled destination of Uranus, Missouri. Among the variety of commercial attractions is the Uranus Sideshow Museum. This place is a throwback to carnival days of old. While my only memories are of small versions at rural locations, there are certain things that I can recall. Barkers shouting out fantastic claims to the passing crowd caught my attention. The mixture of bright lights and colorful banners created a sensory overload that required seeing the promised oddities firsthand. These were certainly different days and a form of entertainment that wasn’t available on television. Since we were needing to stretch our legs, this looked like a good place to do it. The tantalizing banners hinted of unbelievable, and possibly cringe-worthy sights. Entering the Uranus Sideshow Museum, we found that the ceiling is covered in the types of banners that would have been commonplace in the early 1900s. The majority of these types of displays would have been associated with traveling circuses, like Barnum and Bailey. There was a time when there were also permanent displays, which were often referred to as ‘dime museums’. Often the exhibits featured animal acts. Showing off trained animals was an inexpensive form of entertainment that would have offered higher profitability for the owner. After all, the costs would have been food, housing, and the trainer. These shows were popular with crowds of gawkers who piled in to see them perform. Freak shows are not an American invention. As early as the 17th century there were ‘monster shows’ traveling across the European continent. Many of these concentrated on human abnormalities like dwarfism. 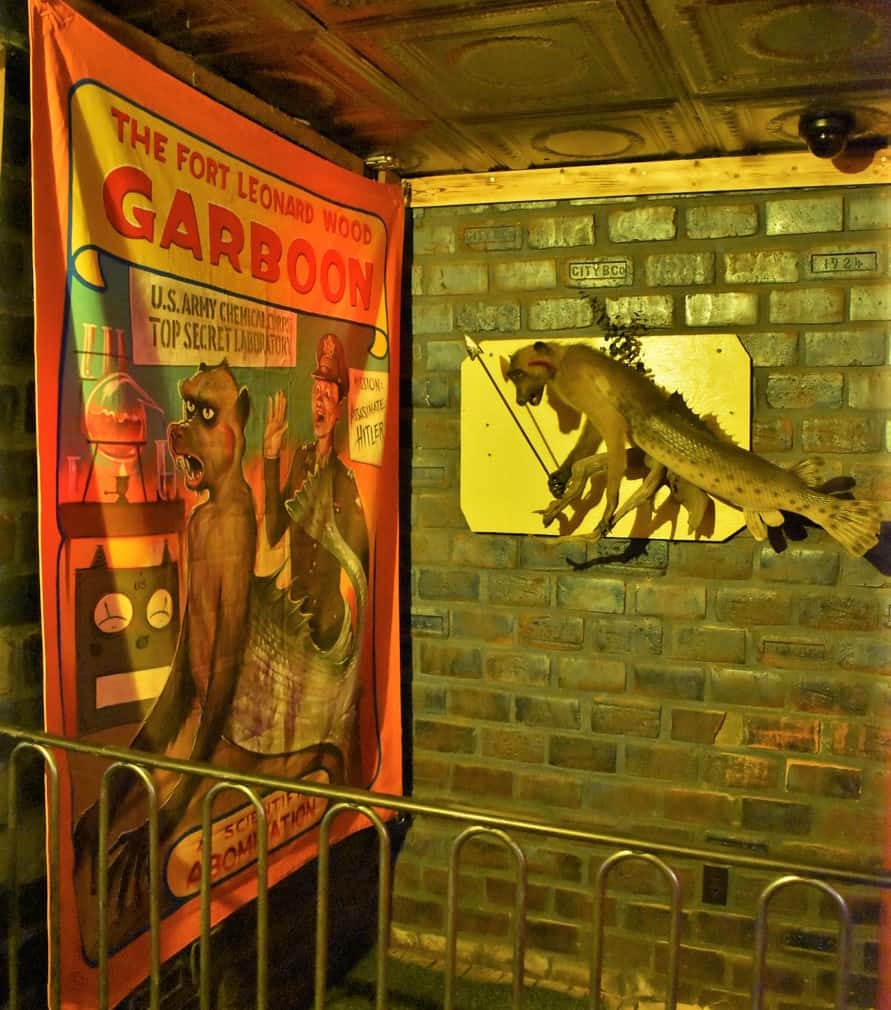 Some of the attractions that I vaguely remember focused more attention on animal deformities. More than a few of the exhibits were obvious taxidermy experiments where the union of two species was concocted. Here is a modern example of this where they have crafted a mix of monkey and fish. Like the ones of old, it plays off of the intrigue of impossibility. It also includes the mystery of how such a possibility could exist. This scenario is covered by the explanation of a scientific experiment gone wrong. Doesn’t that sound a lot like the majority of the sci-fi flicks from the 1950s? Another common sighting at these types of attractions has to do with two-headed abnormalities. Whether it was human or animal, these were commonplace at the old carnival shows. I remember seeing two-headed calves and the Uranus Sideshow Museum has a two-headed turtle swimming around a tank. In the early 1800s, there was a famous pair of Siamese twins who toured all through Europe. It was estimated that over 100,000 people came to see them in just a span of seven months. It was obvious that people were intrigued by these types of sights. Another popular exhibit to capture the attention of a crowd was the hopes of seeing a true-to-life mermaid. Obviously, this would have been impossible, but it still drew plenty of people into the show. As you can see above, these require the skill of a taxidermist to fashion the mythical creature. They have a variety of versions on display at the museum, and it was interesting to see the skill levels of the different tradespeople. While all were aiming for the same final product, they each put their own unique spin on it.

As we were nearing the completion of our visit, a staff member notified us that there was a show preparing to begin. There was only one other couple there at that point, but we all made our way to the stage area. The staff member introduced herself as the ‘tattooed lady’ and showed off some of her body tapestries to the ‘crowd’. Then she proceeded to do a few corny magic tricks, before moving to the main event.

Her feature performance is sword-swallowing. We’ve probably all seen it done, whether in person or on television. At the Uranus Sideshow Museum, we found that she adds a little extra zest. There are plenty of people who can perform sword-swallowing, but how many times do you find such an electrifying performance? This was definitely something we didn’t expect and it was met with a round of applause. I would have said a standing ovation, but there were no chairs for us to start from a seated position. While many of the displays at the Uranus Sideshow Museum are a bit hokey, they are all G-rated and can be viewed by all ages. Nothing will jump out at you and the views of living creatures are pretty rare. (I can only recall the turtle.) Admission was reasonable at $6.00 per adult and the length of visits depends on how in-depth you study the displays. For those who are looking for an unusual stop along a mid-Missouri road trip, this is one you won’t soon forget.