Midwesterners have had a long love affair with the open road. While there are many wonderful destinations scattered across the region, often one is faced with a significant drive. The invention of roads helped make travel more feasible and shortened the time needed to move from point to point. One of our favorite thoroughfares to explore is Route 66, which is often referred to as the “Mother Road”. One of America’s first highways, the love for this path has stood the test of time. Even today, travelers spend hours and hours planning their own excursions down the route. Cruising along Route 66 will definitely bring a feeling of nostalgia. While newer businesses and stops continue to be developed (Check out Uranus, Missouri), it is the long-standing sites that really grab our attention. Way back in 1950, Glenn Wrinkle launched Wrink’s Market. Sitting along the edge of Lebanon, it served as a restocking stop for travelers along this stretch of the Missouri Mother Road. His friendly demeanor made travelers and locals feel welcome in the store. His fresh-made sandwiches were popular with many, including radio host Paul Harvey. Glenn kept the store running until his death in 2005. This sudden change shuttered the doors and could have signaled a permanent death. Glenn’s son Terry Wrinkle attempted to reopen the store, but the downturned economy of 2008 forced it to reclose after only two years. It appeared that Wrink’s Market would fade away like so many other Route 66 iconic stops. Low and behold, the founder’s granddaughter, Katie Hapner, reinvented the market in 2017. While it carries the name “The Vintage Cowgirl”, it still holds the same atmosphere as the olden days. Katie and her stepsister, Sarah, welcome visitors looking for a break from the road. Following in her grandfather’s footsteps, we found her busy assembling sandwiches for hungry travelers. It’s inspiring to see that others are working to bring the past into the future.

Sharing a parking lot with Wrink’s Market is Taylor’s Dairy Joy. Once again, we found that this business has stood the test of time on Route 66. With the lunch hour fast approaching, we decided it was the perfect place to grab some food. Taylor’s has a lot of similarities to dozens of roadside eateries found along the Mother Road. Stepping through the door, we found a hand-written menu filled with easily recognizable dishes. A couple of cheeseburgers sounded good and we decided to split some fries and onion rings. This simple, but filling meal was an obvious hit with the locals, as well.  Finding a seat in the dining room, we noticed the wall mural (at the top of this page) had an odd similarity to something out of a “Close Encounters” movie.

Getting Our Sweet Desserts

Here is where we have to open up a little about our choice for lunch. Sure it’s a Route 66 iconic stop, but it was the word ‘Dairy” in the name that sealed it for us. Let’s be honest, it’s hard for us to pass up a chance to sample some local ice cream no matter where we wander. I mean, we have tasted frozen treats all across North America, including Quebec City in Canada. Taylor’s Dairy Joy offers a variety of soft-serve options, from cones to amazing sundaes. We were not afraid to tackle some of their most impressive creations. We ordered a Chocolate-covered Cherry Sundae and a Turtle Sundae to make sure we had a wide range of flavors. Both ended up being delicious but extremely filling. It became apparent that there would need to be some major walking in our future. 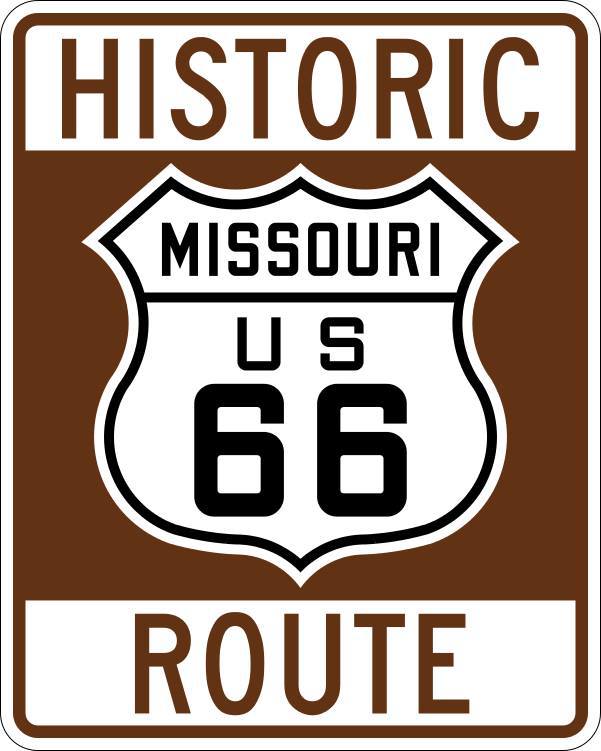 Standing the Test of Time

Route 66 draws thousands of visitors because it reminds us of our past. Seeing all of the unique business designs is entertaining and enlightening. The tried and true methods applied to diverting drivers from the road have been encapsulated in much of the mainstream advertising approach. Shock and awe were common occurrences that would cause travelers to pull over so they could see it for themselves. These days, many of the visual extremes have faded or crumbled under the weight of neglect. We have seen a recent surge in the desire to bring many of the notable iconic sights back to life. We certainly hope this happens and we can preserve these familiar landmarks for future generations. When the interstates were introduced, many didn’t realize just how negative of an impact it would be for some towns and cities. The steady stream of travelers moved from the byways to the highways. While some smaller towns have shriveled and died, places like Lebanon, Missouri have survived the test of time. By embracing their Route 66 history, they are helping pique the interest of a new generation of road warriors. When we found out about their newest display, we just had to get involved. It was an appropriate gesture to lock our love to Route 66. After all, we have had so many wonderful experiences along the Mother Road. When was your last Route 66 road trip?

Share with Someone Who’s Stood the Test of Time!