Exploring Jefferson City would never be complete without sampling a couple of downtown restaurants. While they have a variety of cuisines to select from, sampling the BBQ scene is often a priority for us. Fortunately, we found an option sitting within easy walking distance from the capital building. After a day of exploring, we were looking for a meal that would fill us up, before our drive home. Earlier in our visit, we had spent some time strolling through the area, and had caught sight of Sweet Smoke BBQ. Seeing the satisfied faces of lunchtime diners had us anticipating our turn. As dusk approached, it signaled our appetites to prepare for a meat heavy meal of smoky goodness.

We want to thank Visit Jefferson City and Sweet Smoke BBQ for their hospitality. Rest assured all opinions are our own. Our attention had been focused on the downtown district of Jefferson City.  This is a regular practice in most every city we visit. After touring a few historic sites, like Jefferson Landing, we saved some time to explore the downtown shops. As we made our way up and down High Street, we passed our dinner spot a couple of times. I couldn’t help but wonder what tasty treats we had in store for the evening. There is something about barbecue that really captures my interest. While I captured images of the area for our articles, the idea of sampling the BBQ scene had captured my attention. As the nearby shops began closing for the day, it signaled the time for us to finally get a chance to check out Sweet Smoke BBQ. Stepping through the door, we found the interior pleasing, and the atmosphere simple. This was a good first sign. I have always believed that the more stuff they have to distract your attention, the more of a challenge it may be to find satisfaction in the meal. Here, the decorations are minimal, so diners can keep their focus on the food.

Dinner in downtown can be a mixed bag when it comes to a crowd. Since much of the customer base is usually workers, the evening mealtime can be less busy than lunch. That’s just fine with us since it gives us the freedom to move around for photos. It also means that the staff can focus their attention on fewer tables. The seating is open to choice, and orders are taken at the counter. On our way there, we discovered the menu plastered on a wall. They have a nice selection of choices and even some that are non-BBQ. (Why would anyone not want barbecue?) Something that jumped out at us was the menu items that allow customers to sample various BBQ styles from around the country. While we love our KC style ‘Cue, we can understand how people from other regions are so dedicated to their own versions.

Each has its own redeeming values, and flavor nuances. We like finding eateries that are willing to go out on a limb and offer this type of variety. Now that we stood there facing the choices, what would we pick? Perhaps some Carolina pulled pork or an Alabama brisket sandwich. The Texas-style tacos, made with three types of meat, looked like a good choice, as well.

As we scanned the menu, we found the perfect plate for sampling the BBQ scene at Sweet Smoke. Their Boss Hogg is a sampler style platter that includes ribs, turkey, brisket, pulled pork, and sausage. To accompany this meaty meal, they include two sides. We chose some of their pit beans and Cole slaw. For us, these are two sides that are staples, when sampling the BBQ scene at a new joint. After placing our order, we grabbed a table and waited for our plentiful platter. With a smaller crowd on hand, it didn’t take long for our meal to arrive.

We like that they serve the meats naked, so diners can choose their sauces. Of course, I like to sample the meats and let the flavor of the smoke stand on its own. We found that they deliver a good bark at Sweet Smoke BBQ. The meats were tender without falling apart, which is where some restaurants struggle. The availability of saucing up our entrees with various styles brought an extra appeal. I lathered up some pulled pork with the tangy Carolina sauce and it reminded me of our trip to the Smoky Mountains. A squirt of the Texas mop sauce added a spicy twist to the tender brisket. Being from Kansas City, I couldn’t pass up slathering some of the sweet and tangy sauce on my pork ribs. It seemed like each bite got better and better until soon they were gone. 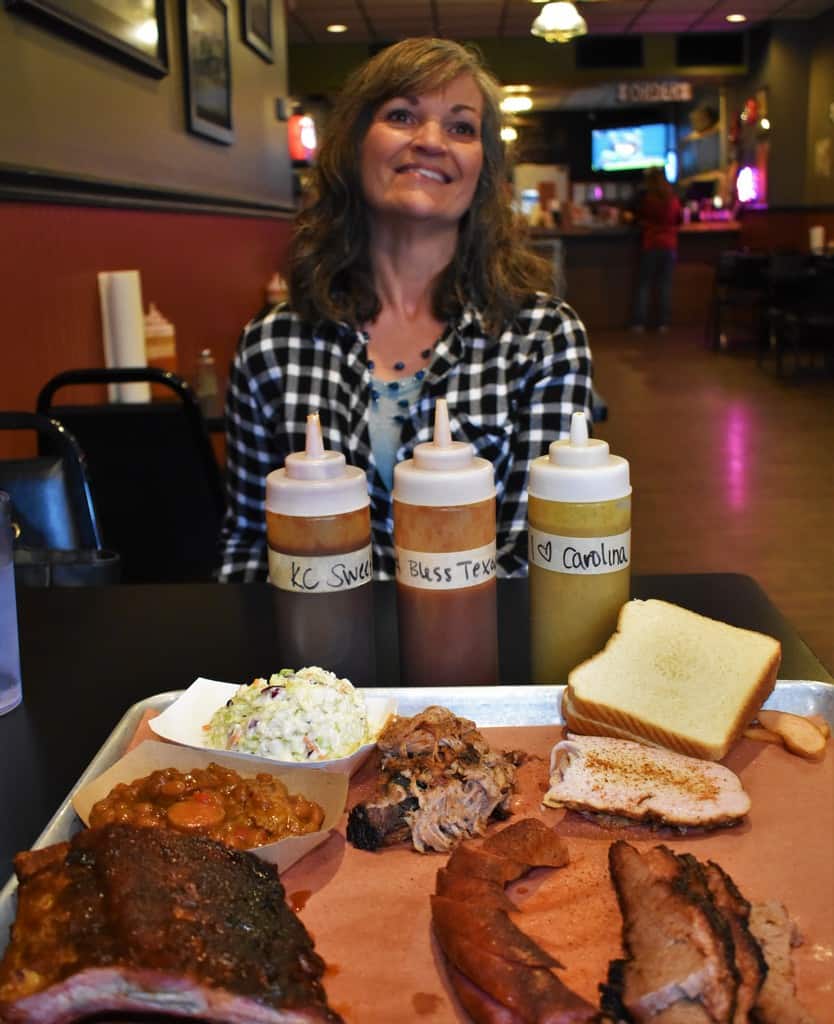 There are times I am in amazement at Crystal’s patience with me. Without hesitation, she prepares the plated meals for me to journal. I’m not sure that I would be able to resist the temptation of testing the tastes laid out before me. Of course, once the pictures are completed, you will find us up to our elbows in our dishes. Once we had time to explore the platter, we discovered some unexpected surprises. Besides delectable dishes of beans and slaw, they also tossed in some delicious nibbles. A sprinkling of pickled apples & onions had a unique taste that demanded us to revisit. The barbecue pickle was another oddity that just works well.

Little did we know, but they would bring out a side order of their Jalapeno Cheddar Grits for us to sample. It was definitely a flavor combination that had both of us going back for more. As we sat there sampling the BBQ scene in Jefferson City, that satisfied feeling washed over us. Once again, we were reassured that good barbecue can be found all over North America. Not only that, but you can find regional favorites in out of the way places. What is your favorite regional style of BBQ?