Do you seek out local dishes when you travel? We have found it interesting to sample the local cuisine, and it has introduced us to some new dishes. Quebec City is one of the oldest European settlements in North America and home to the earliest French settlement in the New World.  During our stay, we would find many French foods mixed into the menus of the eateries that we visited. Of course, one of the most famous dishes from Quebec originated right here in Canada. Our first dinner, at Cafe L’Omelette, allowed us a chance to dine on poutine and pizza in a quaint cafe.

We want to thank Quebec City Tourism for hosting our visit. Rest assured all opinions are our own.

After a half-day of traveling from Kansas City to Quebec City, (We also lost two hours to time zone changes.) we were ready to stretch our legs. Once we had settled ourselves into our lodging at Hotel Manoir d’Auteuil, we headed out for an evening meal. A block from the hotel, we landed on Rue Saint-Louis, which is lined with shops and boutique eateries. While strolling along, we found that each restaurant had a sample of their menu posted near their doorway. This helped us to identify the best place to start our dining experiences in Quebec City.

Prior to our trip, I had reached out to some of the locals in the area through one of their Facebook group pages. I have found this to be a great source for suggestions since the locals always know the hidden gems. One thing that was mentioned frequently was sampling poutine. While we were in a pizza kind of mood, discovering that Cafe L’Omelette had both poutine and pizza on the menu made our decision easy. We popped into this quaint little diner and got seated.

The timing of our trip was early September, so there was a fall feeling in the air. While the temperatures can swing drastically, our time in Quebec City brought comfortable weather. It was even nice enough for the restaurant to have the windows propped open. This added a charming appeal to our visit and made for a romantic experience. The flower boxes added a pop of color and the passing crowds made it feel almost like patio seating.

We were only a couple of hours into our visit and we were already soaking up the European feel of Old Quebec. Now for a chance to sample a truly Canadian dish and one that was founded in the Quebec region. Finding a spot that was frequented by the locals and that served this specialty dish was a home run for us. This was as exciting as sampling a horseshoe in Springfield, Illinois. 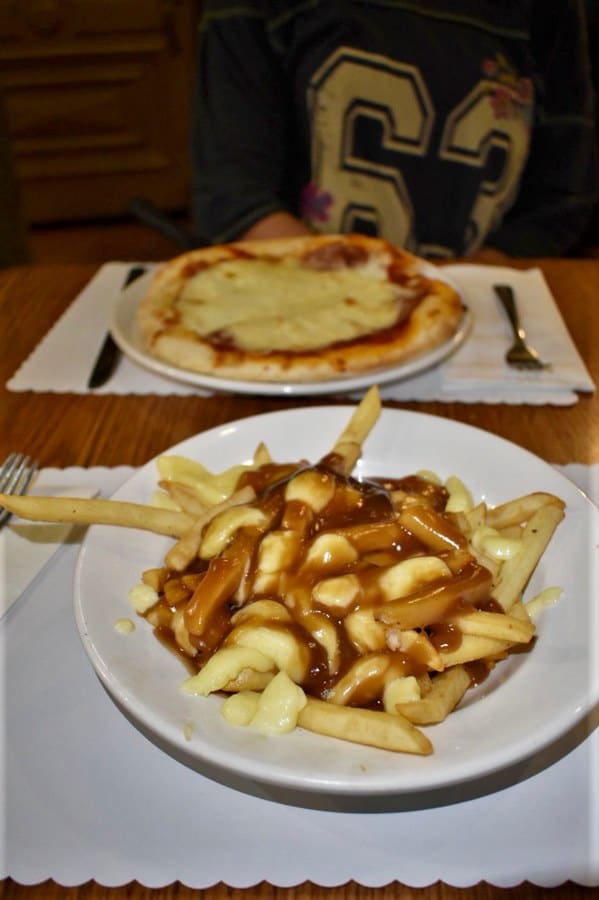 You may not be familiar with poutine since it is primarily a Canadian dish. There are basically three ingredients that make up this carb-rich snack. French fries, cheese curds, and brown gravy seemed to us like an odd combination, but once we tasted it we could understand how it became so popular. The origin of this dish is a little vague, but they know it was started in the 1950s. It began as a snack food served up at sporting events, and at greasy spoon diners. Most of the time it was found in the countryside since it requires fresh cheese curds to have the best taste.

As time moved along, access to fresh ingredients became commonplace in cities, so the dish found its way into Quebec City around 1970. Through the years many restaurants have tweaked the recipe to add an air of sophistication to the dish. This has allowed it to move beyond the average bar and into some of the finest dining establishments in Canada. A short discussion with staff uncovered the secret to successful poutine. The cheese curds and gravy must be added at the last moment so they don’t make the fries soggy. While many dishes on the menus of Quebec restaurants have distinct French ties, poutine is definitely all Canadian. As I mentioned earlier, we were actually in the mood for pizza. I suppose this happens to us due to the desire for salt after a long period of air travel. (Have you ever felt this effect?) Since the poutine and pizza would offer a substantial amount of hunger quenching carbs, we decided a smaller pie would be plenty for the two of us. With about half of a dozen topping combinations to choose from, we decided to stick with a simple pepperoni pizza. Cafe L’Omelette doesn’t hold back on the yeast when preparing their dough, so we had a delightfully puffy crust coated with a rich, flavorful sauce. Walking Off the Carbs

After completing our meal, it was time to do a little exploring. Being a day dedicated mainly to travel, we had left our itinerary open for discovery. Stepping out of the restaurant, we continued our trek down Rue Saint-Louis. At the end of the street, we found ourselves in front of Chateau Frontenac, which is one of the most photographed structures in the world. This marked the edge of Upper Town, so we turned the corner and began our descent into Lower Town. Following the contour of the city walls, we soon found ourselves looking up at the cliffs far above. The Funiculaire is a vertical railway that carries passengers up and down the 194-foot hillside. We watched as the cars moved along the pathway, but we decided to save a ride for another day. A Prelude to History

We continued our stroll through Lower Town and were amazed at the feeling of age that surrounded us. This was not in a tired way, but a respect for the history that this city has experienced. Quebec City began in 1608 with a small square that can still be identified today. In many of the cities that we visit, we find some nice street art, but here they take it to a new level. There are multiple buildings that have huge murals depicting scenes from the past. It was a beautiful reminder that we were experiencing something special. As we walked off our poutine and pizza meal, we soaked in the charming atmosphere of the historic city.