Traveling to a new destination can be filled with wonder, as well as some mystery. Determining your home away from home is one of the biggest decisions to be made. While price can certainly be one factor in the selection process, for us it’s mostly about location, location, location! Our first Canadian trip needed to be a fantastic journey, so the lodging had to be a perfect fit. Hotel Manoir d’Auteuil (pronounced “doe toy”) had us checking all the boxes for a wonderful visit.

One of the first things we look for in lodging is boutique hotels. We have found that they offer an intimate experience, and are often priced reasonably close to standard hotels. It also means that we will be supporting a locally owned business, in most cases. The Hotel Manoir d’Auteuil is a small family-owned lodging option that puts us inside the walled city. Being our first Canadian trip, we had chosen Quebec City for its history and European-style charm. Everyone told us that it had the look of a European city with the welcoming spirit of Canada. Clearly we were in for the best of both worlds.

We want to thank Quebec Cite Tourism and Hotel Manoir d’Auteuil for their hospitality. Rest assured all opinions are our own. After arriving in Quebec City, we were eager to see our hotel. The Old City is made up of Upper Town and Lower Town. Our hotel was located in the upper portion, which is the only fortified city north of Mexico. While the walls of the Old City are no longer needed for defensive purposes, a large portion of them still stand. In the coming days, we would have a chance to learn about the history of Quebec City, which we will share in upcoming articles. As we passed through one of the massive stone gates, we felt as though we had traveled back in time.

Our taxi pulled up in front of the hotel and we were immediately checking all the boxes for charm and quaintness. Space is a premium inside of a walled city, so each building butts up to the next. To provide green spaces, there are window boxes lining the walls of most buildings. We had the added benefit of being directly across the street from Esplanade Park, which offers green space with shaded seating. After retrieving our luggage from the trunk, we made our way into the hotel. The staff was very welcoming and quickly changed from French to English to accommodate us. While I attempted to learn a few phrases in French, it ended up being completely unnecessary. As we traversed the city, each stop we would encounter locals. A common introduction would be “Bonjour”, which was immediately followed by “Hello”. People in Quebec City are fluent in both languages, for the most part. There were a couple of times that we struggled with the language barrier on specific words, but in every instance, the people were extremely patient with us.

We were escorted to our room and staff gave us a quick background of the hotel. Our bed and breakfast package included a morning meal for each of us, which adds $12.00 per person per night. We felt that this was quite an affordable bargain, since it included our morning coffee, as well. Little did we know that the breakfasts at Hotel Manoir d’Auteuil would be incredibly memorable events. For now, we explored our room before heading out to check out some sights. We have relaxed standards on our lodging selections since we spend a minimal amount of time in our room. In hindsight, we wish we would have enjoyed long periods in the comfort that our space afforded us. 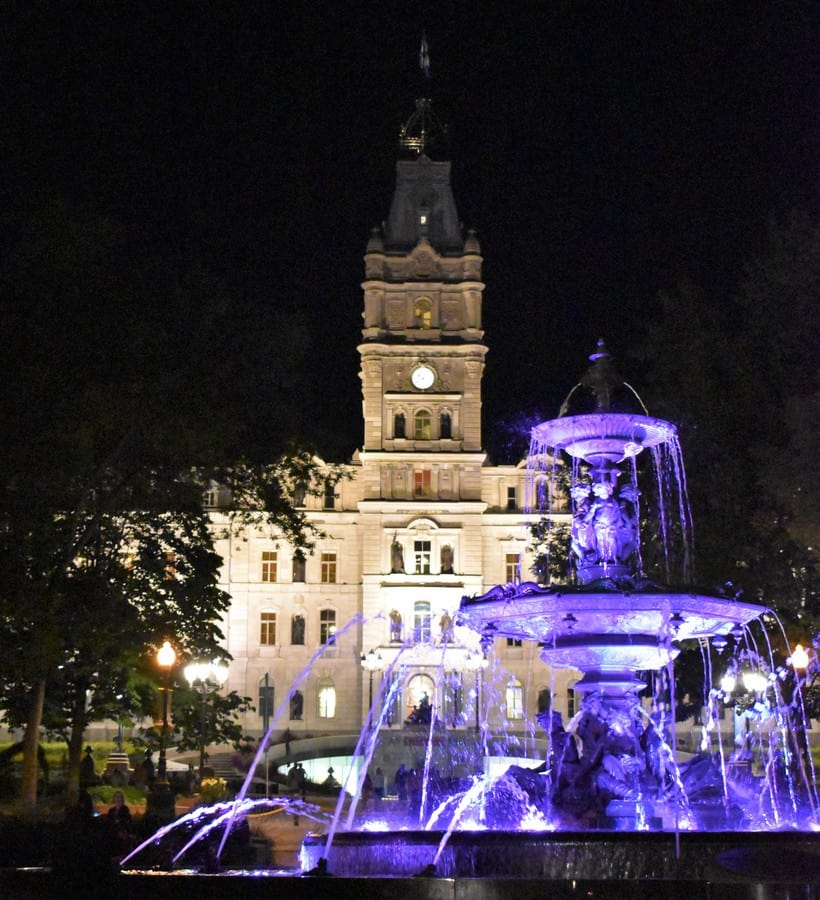 Our travel from Kansas City to Quebec City had taken about five hours. That doesn’t include the nearly one-hour layover we experienced in Philadelphia. We didn’t think about it for this trip, but in the future may alter our travel plans to include more time in that city. We had a chance to experience some of it on an earlier visit, but barely scraped the surface of this historic city. (You can see that story here.) By the time we stepped back out of the door of our hotel darkness had fallen across the city.

We decided to head around the corner for dinner since one of the nearby streets is well-known for its restaurants. After dinner, we strolled around the Old City taking in the beauty of it all. Quebec City was founded at the start of the 1600s, which made it the oldest city we have ever visited. It felt so historic to walk through the neighborhoods and we soon found ourselves at one of the city gates. Passing through the St. Louis Gate brought us up to the Parliament Building. It was hard to imagine that our hotel was only two blocks away. After taking in the atmosphere for a while, we made our way back to our hotel. We had a big day planned and wanted to be well-rested.

Before heading up to our room, I decided to check out the dining room in our hotel. I was checking all the boxes for a perfect stay and needed to know what to expect. As we stepped through the doorway, we were surprised by the metropolitan decor. It was hard to imagine that we were in a city that was over 400 years old. The dining room offered multiple levels of seating options, including an outdoor patio. The hotel only has 27 rooms, so it appeared that they were capable of handling a sizable crowd. We made our way to our room with anticipation of a French breakfast. The morning dawned with hopes of a beautiful day. Traveling to Quebec City in September opens up the opportunity for cool and rainy weather. We pride ourselves in always being prepared for what nature wants to throw at us. That is, as long as we get breakfast. After preparing for our day of exploring, we made our way downstairs. Passing the front desk, we heard our first “Bonjour” of the day. It would take us a couple of days to start responding in like manner, so, for now, it was just Good Morning. The one constant that we came to anticipate was the smile that accompanied the greeting.

A small ramp leads up to the dining area, where we found a few tables already occupied. A staff member instructed us that seating was open to choice. We dropped our bags and headed to the coffee station. By the time we returned to our table, the staff had left menus. The smell of freshly baked croissants filled the air, but I was set on sampling their crepes. To me, it seemed like the best way to evaluate their food. What we would discover was that the staff at Hotel Manoir d’Auteuil bring the cream of the crop to the tables every morning. This lesson would be repeated every day during our visit. Checking All the Boxes

Each morning we would find ourselves exploring more of the menu. The one constant was the way they could continue to amaze us. Everything was so fresh. We would learn that the fruit is grown on a nearby island that has soil perfect for crops. As a matter of fact, most of the restaurants we visited source their fruits and vegetables from this island. Another good lesson was that the freshest croissants are to be had at precisely 7:30 in the morning when they were retrieved from the oven. You can bet that we learned to be in the dining room right on time. 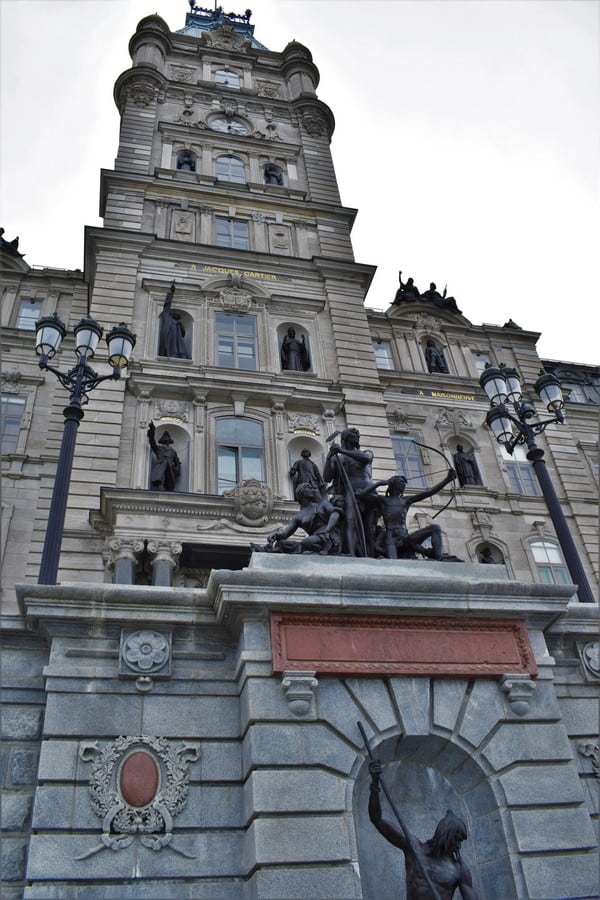 Each day was filled with exploring the Old City. The idea of being able to walk to so many historic sights with ease was incredible. Checking all the boxes for being tourist-friendly was easy in Quebec City. The city is built on a hill, which provided the calorie-burning opportunities that allowed us to dine in style without worry. Obviously there are ways to get around without all of the climbing, and we would learn to use them when we were in a hurry. Visiting the Parliament Building during daylight hours revealed the amazing architecture involved in its creation.

As the days passed, we were becoming familiar with the city and its long and storied history. It became apparent that even with four days to explore, we would hardly scratch the surface of what this capital city has to offer. Oh well, that just means we would have to make a return visit sometime in the future. For now, we would just focus on what we could experience in the time allotted.

But, Oh Those Breakfasts! √

During our stay, we were introduced to so many unique dishes. The city is filled with some of the finest cuisines in the world, but oh those breakfasts. It seemed like each morning the staff at the hotel would outdo themselves. Have you ever felt like sleeping in during a vacation? This was an urge that we could easily pass up since we knew what would be waiting for us in the dining room. Even something so simple as a Ham and Cheese Croissant Sandwich took on an air of sophistication at the Hotel Manoir d’Auteuil. Our time in Quebec City passed too quickly. We did a good job of exploring the Old City, and we look forward to sharing our many experiences with you. Our hope is that we will show you that a visit to our neighbors to the north will yield a vacation that you will remember for a lifetime. Remember that when checking all the boxes, a great home-base is the key to a wonderful stay. We highly recommend the Hotel Manoir d’Auteuil for its friendly staff, charming atmosphere, and unbelievable cuisine. Bon Voyage!