High in the Panhandle-Plains of Texas, people carve out a life from the rugged landscape. Driving across this flat terrain reminded us of traveling across the western half of our home state of Kansas. This perspective changed when we arrived at Palo Duro Canyon. Laid out before us we saw only glimpses of the 120-mile long canyon system. As the second-largest canyon in the United States, it has earned the nickname of “The Grand Canyon of Texas”.

Part of the Palo Duro Canyon is home to a state park. This area is popular with hikers, campers, and nature lovers from all around the world. Admission to Palo Duro State Park is $8.00 per adult, with children 12 & under get in for free. Traveling to the park is about a 25-minute drive from Amarillo. After exiting the interstate, the final 10 miles were filled with anticipation. Having scouted out the area on Google maps, we were spotting landmarks that showed our progress.

We want to thank Visit Amarillo and Palo Duro Adventure Park for hosting our visit. Rest assured all opinions are our own. The funny thing about canyons are they sneak up on you. Since they are basically holes in the ground, you don’t see them from miles away. The same applies to Palo Duro Canyon. With each new landmark, our anticipation grew. Passing the zip-lines and jeep tours were tell-tale signs that we had finally arrived. (More about those places in a minute.) With an average depth of around 800 feet, the floor of the canyon offers a different experience than the one found on the rim. As we stood on the lip looking out at the canyon, our minds struggled to imagine that so much wonder and beauty could be created by erosion.

Getting Oriented at Palo Duro Canyon

Our first stop, inside the park, was at the El Coronado Lodge Visitors Center. It’s a good place to get oriented, before heading out to explore. A small museum helps visitors paint a picture of the history of Palo Duro Canyon. As we explored the displays, we noticed mention of the people who were hunters/gatherers long before the land was settled. We had visited a site north of Amarillo that had introduced us to these early inhabitants. Of course, during those times the landscape would have been filled with herds of bison. Get in Touch with Nature

Now that we had our bearings, it was time to get in touch with nature. Completing the drive to the floor of the canyon brought a new perspective. From here we could see the walls surrounding us. The colorful bands that signify eons of time are like rings that line the land. Rocky outcroppings are scattered across the landscape, as remnants from centuries of erosion. These hoodoos (also called fairy chimneys or earth pyramids) are formed by the erosion of soft soil around a hard stone. One of the most notable examples of this is Lighthouse Rock, which is the picture at the top of this page. Throughout Palo Duro Canyon you will find perfect backdrops for family photos. Many of these are short hikes from the road and are accessible by most travelers. After navigating the decline at the entrance, we found ourselves passing a large parking lot. We noticed a group of people had pulled in for a closer look. Following their lead, we pulled in. What we found was a serene setting where we could get our first taste of the landscape.

After the group finished their photos, we took the opportunity to pose for a few. This rocky outcropping sits in front of a 1/2 mile nature trail, which is a good way to warm up for some of the longer hikes that are found in Palo Duro Canyon. Ever since our visit to Yellowstone National Park, we know to keep our eyes peeled for gatherings of tourists. Not only does this usually mark a possible wildlife sighting, but also helps us find interesting sights. Obviously, we don’t always rely on others for picturesque sightings. Our visit to the canyon included plenty of time where we were the only two around. Of course, there were plenty of others in the park at the same time, but with all of this open space, you feel like you are solitary explorers. As the heat of the July summer sun increased, we began to spot more raptors riding the upward spiraling thermals. Seeing this sight above one of the colorfully banded canyon walls left us staring in wonder.

We continued our drive along the park loop. After passing a series of campgrounds, we came upon The Big Cave. Another formation that has been created by erosion are caves. While there are many smaller ones dotting the landscape, one is the most visited in Palo Duro Canyon. The cave is visible from the main road and can be reached by a short hike of about 600 feet. The climb up requires navigating a rocky slide area, which was stable but still requires paying attention. During our visit, we were joined by another group of hikers. 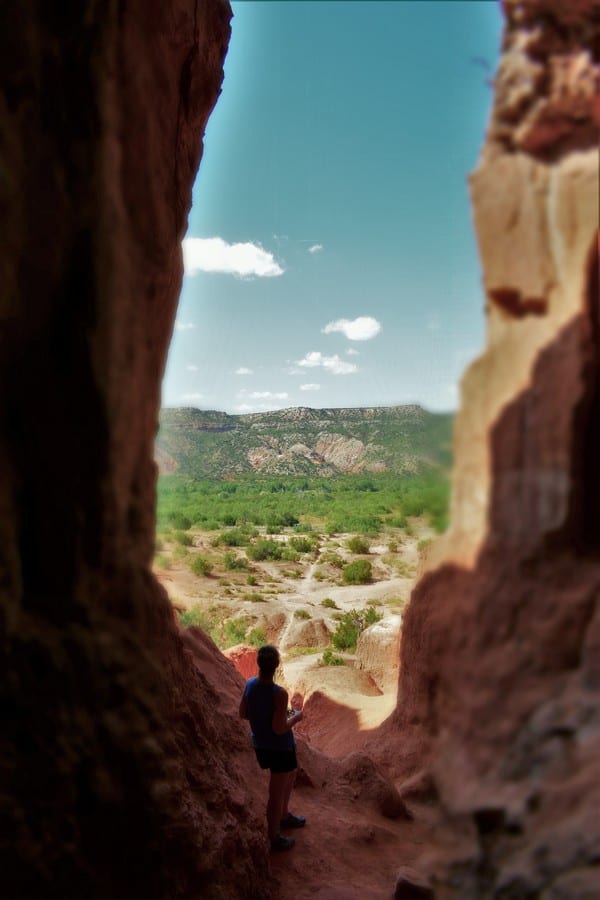 Once we reached the cave entrance, we took a few minutes to look around. Unlike the massive cave formations found in the Midwest (like this one in Dubuque), these are fairly simple. Still, it offered a break from the sun and an interesting perspective of the canyon. After a few minutes, we all decided to head back down to the main road. Checking the time, we discovered it was time for us to head out of the park for a couple of excursions.

Palo Duro Canyon is huge! We learned that only a portion of the canyon is part of the state park. Other areas are privately owned and include opportunities for visitors to have exciting experiences. We doubled back out of the park to check out a couple of places close to the entrance. (Be sure to hang on to your entrance receipt for reentry.) Hiking can lead to overlooks, which have amazing views of the canyon below. We learned that there are other ways to get a firsthand look at nature.

At Palo Duro Creek Ranch, guests can take a jeep ride down into the canyon. This wild ride had us hanging onto the rails, as the landscape opened up before our eyes. With 1, 2, or 3-hour options, guests can pick the length of their visit. Once we arrived at the floor of the canyon, we were treated to some special moments exploring the formations. It was definitely an experience that Crystal and I will long remember. With a trip up and down the canyon wall under our belt, I was in the mood for a little more adventure. Just across the street, we found our next destination. At Palo Duro Canyon Adventure Park they have unique ways to get a birds-eye view of the landscape. Having the opportunity to zip-line across one of the canyon gorges seemed like a fun way to get some air time. During the research portion of our trip, I had made contact with the owner, who invited us in for a ride. While I was all in on it, Crystal chose to stay grounded for this part of the trip. That put her behind the camera for a change. After strapping into the safety gear, we headed out to the tower. Here, we traversed the swinging bridges up to the platform where we would launch. There were two others in my group, so it gave me time to survey the surroundings. The view from up there gave me a better sense of the breadth of the canyon. Once my turn came, I hooked up to the line (including some redundant safety lines) and launched off the platform. While the 300-foot ride takes a while, time passes quickly. Once I arrived on the other side, it was time to unhook and across a 300-foot bridge to where we started our journey.

Since our visit, they have completed a new thrill ride that takes guests on an even longer ride. On this new version, riders zip 800 feet and then back to the starting point. I’m hoping we make it back to Amarillo so that I can give this ride a whirl. How many of you would be up for that challenge?

With our adrenaline pumping activities complete, it was time to bring our heartbeats back to normal. We made our way back into the park and had time for another drive. The beauty of the landscape just kept impressing us. Our final activity, in Palo Duro Canyon, was a visit to the Texas Outdoor Musical. The evening entertainment included a chuckwagon dinner, a backstage tour, and a rousing outdoor performance that is as big as the whole outdoors. After the show, we even had time to meet some of the performers who gladly mingled with guests. What a perfect way to cap off an adventurous day in the wild. It is hard to really express just how amazing Palo Duro Canyon was to see in person. We wish we would have had time to take advantage of more of the hiking trails, but I suppose these will have to wait for a future visit. It should also be noted that there are places that offer horseback riding. While we did spot the occasional raptor circling overhead, the hot summer day most likely forced many of the other inhabitants into the shade. Of course, spotting lizards and roadrunners can be easy around this region. Whether you want to pitch a tent, bring an RV, or just drive in from one of the nearby cities, Palo Duro Canyon is a great place to explore.