Everyone knows that they do things bigger in Texas. We discovered this also applies to their outdoor theater located in Palo Duro Canyon. After spending a day exploring the 2nd largest canyon in the United States, we made a visit to Texas Outdoor Musical. This long-running musical has played from June through August for over 50 years and brings Texas-sized fun to the Panhandle. When we were researching our Amarillo trip, a visit to this show became a recurring recommendation.

The beauty of Palo Duro Canyon makes the perfect backdrop for this show. Earlier in the day, a thrill ride up and down the canyon wall had given us a firsthand understanding of the height of the canyon walls. Exploring more of the canyon had included zip-lining and hiking, so we were looking forward to a relaxing evening of entertainment.

We want to thank Visit Amarillo and Texas Outdoor Musical for their hospitality. Rest assured all opinions are our own.

During the preparation for our Amarillo trip, we had made contact with Matt McComas. He is the new Marketing Director for Texas Outdoor Musical. We discovered that in the past, the theatrical performances had a strict policy about cameras. After some back-and-forth, we were granted permission to photograph the performance. This was an amazing honor for us, and we arrived at the theater with the intention of enjoying ourselves to the fullest. Being set in this beautiful park adds to the wonder of the experience, and we found ourselves admiring the landscape during quieter moments.

Matt wanted to make sure that we had a complete experience, and had arranged all of our evening’s activities. We wanted to make sure anyone could enjoy the same things that we did. All of our activities are available to the general public (except for taking photos).  After parking our car at 6:00, we made our way through the gate and into the ticketing area. We popped into the gift shop to check out the available souvenirs and found they also sell refreshments during the show. On a hot Texas summer night, this is important to remember.

Texas Outdoor Musical offers a Chuck Wagon BBQ Dinner that can be added to your tickets. We found that many of the patrons were joining us for dinner that evening. Guests pass through a line where they serve up barbecue brisket, sausage and pulled pork. Toss in some Coleslaw, potato salad, and beans for the sides. In case you still have a little room left, dessert is the choice of a couple of flavors of cobbler. Now that we had full bellies, it was time to dive into some Texas-sized fun.

We had time to kill before the amphitheater seating opened, so we decided to walk around. Behind the gift shop, we found a pavilion where many of the guests were gathered. We also found that Benny Tahmahkera Jr. had set up a display that showcased Native Indian art and culture. At about that time, Matt showed up and introduced us to Benny, who plays the part of Quanah Parker in the show. An interesting fact is that Benny is actually the great-great-grandson of Parker and a member of the Comanche Nation.

Matt led us to where the backstage tours begin, and along the way, we ran into David Yirak, the Managing Artistic Director for Texas Outdoor Musical. His pride in the show became immediately apparent during our conversation. Here was a reinforcement that we really needed to deliver on our request to create an article about the show.

We had missed the tour, so Matt offered to give us one himself. Behind the scenes, we saw many of the props that would be used for the evening’s production. As we passed one of the rehearsal stages, we saw some of the cast practicing their steps. We stepped out onto the amphitheater floor and looked up at the seating. The sun had fallen behind the canyon walls, which signaled that the doors would soon be opening for people to find their seats.

Being deep in the heart of the Panhandle, in July, means that sundown comes late. With the stage being at the base of a 600-foot canyon wall, the shadows of dusk grow quickly. The crowd filtered into the theater and found their seats. Matt had reserved a section of seats that would afford us a direct line for photography. To our left, the band appeared out of one of the rotating stage doors that line the sides of the stage. Matt made a few announcements prior to the start of the show, as the crowd settled in for an evening of Texas-sized fun. At 8:30, a trumpet played a short tune while a lone rider appeared on the lip of the canyon. The audience’s attention is drawn to this solitary figure who gallops across the ridge with the Texas flag waving behind him. This signals the start of what has become the best-attended outdoor theater event in America. As the performers sing and dance to the well-choreographed script, we found ourselves toe-tapping along with the beat.

It is hard to imagine that for each season they must assemble the entourage in about one month. Fortunately, many of the performers are returning from previous seasons, which helps in the process. There are still a lot of moving pieces, and auditions are held as far away as Tennessee. It takes lots of commitment to be willing to sign up for the 65 performances, that will take place over a season. Needless to say, many life-long friendships will spring from this experience. The Story of Panhandle

As the darkness slowly grew around us, the story unfolded across the stage. Stagehands quickly moved props to keep the storyline flowing. While the tale is very loosely based on historical events in the Panhandle, it replicates an atmosphere that was repeated all across the western frontier. After his parent’s death, Calvin Armstrong returns to his childhood homestead. He brought with him plans to move the Panhandle forward, by bringing the railroad to town. Calvin’s ideas don’t sit well with Col. Charles Goodnight, a local rancher. Goodnight has spent far too long building his empire, to see it divided by railroad tracks. Tensions are increased by Col. Goodnight’s niece’s feelings for Calvin. While the main plotline rotates around ranchers versus homesteaders, various love interests swirl into the mix. An assortment of supporting characters flush out the cast. Tucker Yelldell befriends Calvin Armstrong and even comes to his aid during a serious illness. Kate Lucas is the love interest of Tucker and adds some lighthearted accents to the script. As with any good story, there is a mix of angst, conflict, desperation, and eventually cooperation. By presenting it with a musical score and charming entertainers, it makes for a delightful evening of entertainment.

With a wide array of scenes to be played out, Texas Outdoor Musical has developed an inventive solution to scenery changes. Impromptu stages are set on the right and left of the main stage. These rotate to make the changing of scenery pieces occur seamlessly backstage. While the audience’s attention is drawn to one of these sub-stages, the crew can reorganize the main stage for the next act. Not only does this keep the action moving along, but it actually focuses the audience on the storyline. 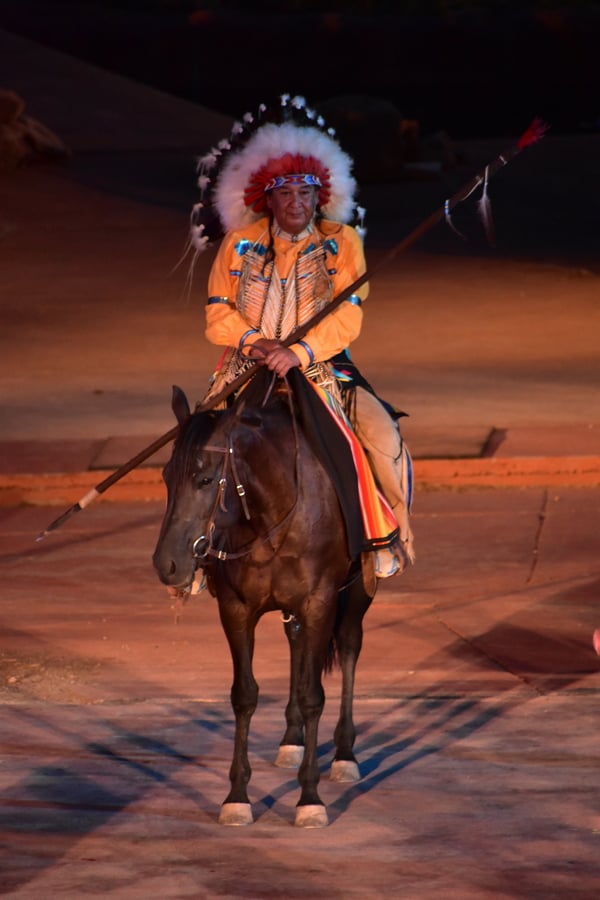 In the midst of the squabbling between rancher and farmer, Quanah Parker appears. Parker was considered by many to be the last chief of the Quahadi Comanche. His resistance to white settlers in the Panhandle is well documented. His tribe was the last to leave the Staked Plains and move to a reservation in Oklahoma. When he was finally forced onto a reservation, he quickly adapted. While he never truly assimilated into the white culture, he taught the younger generation of Comanche the importance of learning their ways.

As the story wrapped up, the performers moved into a patriotic piece. Behind them, a choreographed fountain creates a moving screen. This was added in 2011, due to an excessive period of drought. Fortunately for us, 2019 had brought plenty of rain, which was apparent in the greenery found throughout Palo Duro Canyon. As the music grew, fireworks appeared over the canyon ridge. What an amazing finish to a grand evening of entertainment.

As the last fireworks faded away, the performers took their final bows. The lights returned to the amphitheater and the crowd began filing out. While we waited for the crowd to thin, we had a short conversation with the staff nearby. The pride that everyone has in the performance is easily visible. They all have plenty to be proud of, as the show is a memorable event. After all, when was the last time you have had the opportunity to see so much in one sitting?

As we made our way back to the entrance, we found that the main characters had assembled for an impromptu meet-and-greet. For us, this was just frosting on a delicious cake. It was obvious that the performers truly enjoy what they do. After some short conversations, we decided it was time to head back to Amarillo. During our drive back, we enjoyed a star-filled sky away from the city lights. An Evening Under The Stars

What began as an idea of having a relaxing evening of entertainment turned into something much greater. That evening we met people, heard stories, and saw Texas pride in a way that was new to us. We have traveled to Texas plenty of times in the past, but this was our first excursion into the Panhandle. Life in this region is unpredictable and forces the residents to become resourceful. Their ability to withstand untold issues has made them resilient, but it has not broken their spirits. Texas Outdoor Musical has bottled this spirit and uncorks it each night for an eager crowd. Isn’t it time for you to make plans to see this extravaganza firsthand?