When you travel to Springfield, Illinois, you will find yourself transported to the Land of Lincoln. While he may not have been born in Illinois, much of his formative years were spent in this Midwest state. I have to tell you that I have been fascinated with the life of the 16th President since my youth. An opportunity to visit the Abraham Lincoln Presidential Library and Museum was not to be missed. We set aside plenty of time, since we knew we would be immersing in history during our tour. It only seemed fitting that we should start our visit on a day that threatened rain.

We want to thank Visit Springfield and the Lincoln Presidential Library for their hospitality. Rest assured all opinions are our own. First of its Kind

The Abraham Lincoln Presidential Museum opened to the public in 2005. It’s hard to imagine it was 140 years after his death. While most presidential libraries start with the design of the building, this one was different. Wanting to create an “experience” for visitors, the inner exhibits were first determined. Afterwards, the shell that would become the building was designed to encapsulate all the contents. What this produced was a first of its kind museum, that immerses guests in the life and times of the 16th President of the United States. Covering an entire city block, it is the largest presidential museum. The museum is designed to walk visitors through the life of Lincoln. We started at The Log Cabin exhibit, which showcases Abe in his youth. The cabin is a recreation of his boyhood home in Indiana. The designers attempted to stay true, and even added reproductions of the native trees that would have been found in the region. They used logs from barns of the mid-1800s to construct the cabin. As we explored the space, one of the museum staff was on hand to answer any questions. She even explained that although the space seemed small, it was probably larger than Lincoln’s boyhood home.

After moving to New Salem, Illinois, young Abe entered his first business venture. As we were immersing in history, we came upon the scene of Abe at work in the Berry-Lincoln Store. He is joined by Ann Rutledge, who was an early love interest for Abe. She would succumb to a wave of typhoid that struck the area in the 1830s. Passing through the store, we came to a gallery that showcases Lincoln’s life in Springfield, Illinois. Here we found Abe courting Mary Todd, who would eventually become his wife and mother to their four sons. Over time, Lincoln self-taught himself law by reading various books. In 1843, Lincoln moved into his downtown Springfield law office with partner Stephen Logan. This partnership dissolved in 1844. That same year, he took on a new partner, William Herndon. What his new partner discovered was that Abe was prone to reading aloud, much to his new partner’s dismay. He also found that Lincoln was less than organized when it came to filing documents. The stories of Lincoln bringing his sons to the office, and then ignoring their often overzealous activity, was surely another point of discomfort for his office mate. Even with these distractions, Lincoln and Herndon would remain partners until Abe’s death in 1865. On the Campaign Trail

In 1858, Lincoln faced Stephen Douglas in a series of debates, as they both ran for the position of Illinois Senator. During this period, Abe would deliver his House Divided speech, which was possibly his most famous given in Illinois. He won the election, and within a couple of years, was nominated for President by the Republican Party. He received 40 percent of the popular vote, in a four-way contest, and became the first Republican President. An interesting exhibit at the Abraham Lincoln Presidential Museum is designed to shed light on the complicated election. It uses  21st Century television news reports, and electronic advertisements, to show what the election would look like today. 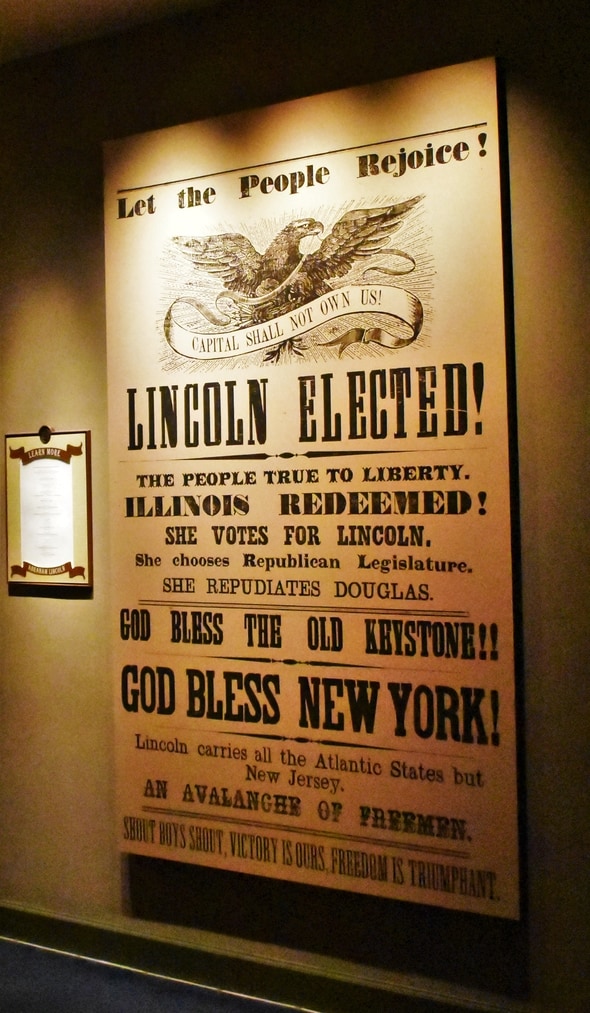 Off to the White House

Lincoln Elected! The news rang out across the nation to mixed opinions. Abraham Lincoln was one of the most controversial presidents, as the country was already on the cusp of secession. During the election, Lincoln’s name did not appear on ten of the southern states ballots, yet now he was their new Commander-in-Chief. A good deal felt that his anti-slavery stance also meant that he was against their states as a whole. Just over a month after his election, South Carolina would secede from the Union. By the end of following February, six more southern states would join in. Injustice is Brought to the Forefront

While Lincoln believed that slavery was wrong morally, he struggled with how to solve the issue. The U.S. Constitution sanctioned it, although the word slavery does not appear in the actual document. Instead, there are clauses that protected the slave owners rights from persecution by the newly formed federal government. The country was now entering the second year of the Civil War, and the people were starting to understand the true costs in human lives. While slavery was certainly a contributing factor to the Civil War, it was not necessarily the primary one. With the North’s commitment to the war waning, it was time for a stance on the issue of slavery, once and for all.

As we made our way through the Lincoln Presidential Museum, we found ourselves immersing in history lessons that were hot buttons during the Civil War. By the end of 1862, Lincoln was struggling with issuing the Emancipation Proclamation. On January 1, 1863, the proclamation was released. The resolution was specifically designed to only apply to the freeing of slaves in the southern (Confederate) states. Since these states were already in rebellion, it had no immediate impact on the slaves in those areas. The Emancipation was meant to give more purpose to the war effort of the Northern states, but it was also a rallying cry for the south, who would lose their slaves if they lost the war. Decision Must Be Made

With Britain teetering on their decision to engage in the war, on the side of the south, the proclamation’s timing was imperative. Lincoln had waited until the north had a decisive win at the Battle of Antietam, in the fall of 1862. The Emancipation Proclamation was an executive order, and would not become an amendment to the Constitution until December 6, 1865. Abraham Lincoln’s decision to give this order would allow Britain, who was against slavery, a reason to abstain from joining in on the war. This would prevent the south from receiving the much needed aid that would have fueled their war efforts and eventually lead to their defeat.

John Wilkes Booth is a name that is synonymous with the death of Abraham Lincoln, yet assassination was not his first thought. His first plan was to kidnap the President and hold him for hostage for the release of thousands of southern prisoners of war. The surrender of Robert E. Lee, on April 9, 1865, thwarted any remaining hopes of a southern victory. Booth’s plans immediately switched to the killing of the President, which he carried out on the night of April 14th. Co-conspirators were supposed to assassinate the Vice-President and Secretary of State, but these attempts failed.

Continuing through the museum, we come to Lincoln’s final return to Springfield, Illinois. One week after his death, Lincoln’s coffin would be loaded onto a train that would carry him home. The trip would travel through 180 cities, in seven states. Along the route, there would be stops for public viewings. At each, they would unload the coffin and carry it through town in a hearse. It would be on public display, where thousands would flock for a chance to pay their final respects. In the end, President Lincoln would be interred in a tomb near downtown Springfield. (You can read our article about this stop here.) See it for Yourself

Our visit to the Abraham Lincoln Presidential Museum was one of the highlights of our trips in 2019. Having an opportunity of immersing in history on such a grand scale is not to be missed. The museum includes two amazing theaters (no photography) that offer state of the art experiences. In Ghosts of the Library, we watched a curator bring the past to life, and were amazed at what happens at the end of the show. (No spoilers from us!) The Union Theater is a sight, sound, and sensation that draws guests into the stories of the Civil War. Both of these shows were first rate productions that left us in awe. Before we left the museum, we couldn’t pass up an opportunity to take a selfie with the Lincoln family, who welcome visitors to the Presidential museum. I was still in amazement, as we finally made our way out of the space. How many of you have visited the museum?  We would love to hear your opinions of it in the comments section at the bottom of the page. Thanks!