Visiting Springfield, Illinois would not be complete without paying respect at Lincoln’s Tomb. Having a chance to see the final resting place of our 16th president, was high on our list of must do activities. Since our visit to Springfield was focused on the downtown region of this Midwestern city, we decided to make this our first stop. Lincoln’s Tomb is located a couple miles north of the downtown area, so we decided to drive there.

We want to thank Visit Springfield for their hospitality. Rest assured all opinions are our own. The day we arrived in Springfield was overcast with a threat of rain. Lincoln’s Tomb is located in the Oak Ridge Cemetery, along Monument Avenue. As we approached the entrance, we noticed a couple of souvenir shops located nearby. A quick stop at one allowed us a brief conversation with some locals. When we explained the purpose of our trip, they were excited to hear what stops we had planned. This was an opportunity for us to gauge how well we had selected, since these ladies were open and honest about our choices. This conversation confirmed that we were in for a wonderful visit, so we made our purchase and headed into the cemetery. 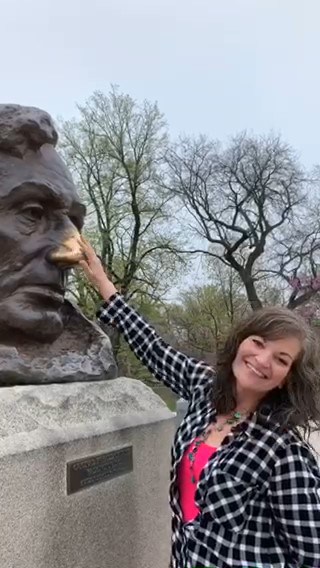 During the last few miles of our drive, we had been passing in and out of showers. The skies dried up as we entered the city limits and remained dry during our entire stop at Lincoln’s Tomb. We made our way to the parking lot outside the memorial. Being a weekday, the crowds were thin, although a school tour did arrive during our visit. Outside of the tomb entrance we saw a bronze copy of the Gutzon Borglum head of Lincoln. The original is carved out of marble and is on display at the U.S. Capitol. You may recognize the artist’s name from his work at Mount Rushmore. His Springfield bronze offers visitors a chance to rub the nose for luck. Crystal was willing to wait her turn for this opportunity. The tomb is constructed of granite with a 117 foot tall obelisk rising toward the sky. We passed through the entrance and into the marble receiving room. Here we found one of the most recognizable sculptures of Abraham Lincoln. Staff members are on hand to tell the history of the site. After his death, a group of Lincoln’s friends began a fund-raising effort to construct his tomb. Their plan was to develop it in the downtown area of Springfield. Mary Lincoln, Abe’s wife, threatened to have the president’s remains moved to Washington, if the tomb was not constructed at Oak Ridge. Lincoln’s remains would be moved multiple times, before finally arriving in his final resting place. When paying respect at Lincoln’s Tomb, we found that he is not alone. Joining him in the mausoleum are his wife Mary and three of his sons. Lincoln’s son William, who died during his father’s presidency, was brought to Springfield with his father in 1865. That same year, the remains of Edward, who died at age three, was moved from a local cemetery to join his family. All three bodies were kept in a temporary vault, while the design and construction of the permanent structure was completed. In 1871, the Lincoln’s youngest son passes and joins his father in Springfield. Mary would be the last to join them, after passing away in 1882. The group of friends who helped raise funds for the memorial were also responsible for an unusual occurrence. Multiple moves of Lincoln’s remains were required over a 35 year period. Some were made for construction, while others were due to repairs to the tomb. Another instance came from an attempted theft of the president’s remains in 1876. In all, Lincoln’s casket was opened five times to verify his remains were still inside. Those present for the viewing noted that his remains seemed to have little decay. Many believe it was due to the repeated embalming that occurred during his train procession from Washington to Springfield. Launching into the Land of Lincoln

Our Springfield, Illinois visit was off to an amazing start. Having an opportunity for paying respect at Lincoln’s Tomb was a memory that we will hold with us. To think of the pressure that this leader faced, as he led the country during its most tumultuous period, puts his struggles in perspective. With our visit just started, we were anxious to continue exploring this historic Midwest city. It was looking like Springfield would be another great destination for a family friendly vacation. How many of you have visited the Illinois capital city? Eat At Syrup – An Elevated Breakfast Our Date With History – Club Arcada An Evening of Horseshoes and Ghost Tales Gallery

An Evening of Horseshoes and Ghost Tales Immersing In History at The Abraham Lincoln Presidential Museum Gallery