Located in the heart of the state of Missouri, you will find the city of Boonville. While many pass by the exit along I-70, we went day-tripping in Boonville to learn more of the city’s historical significance. Transportation has seemed to have played a huge role in this Midwest destination, even before it was founded. Lying along the Missouri River, the region was home to native Indian tribes for thousands of years. They were the first to understand the value of the nearby salt licks. Lewis and Clark passed through the area in 1805, as they explored the lands of the Louisiana Purchase. This would be a precursor of many more to come.

We want to thank Go Boonville for supporting our visit. Rest assured all opinions are our own.

While we were merely day-tripping in Boonville, many came before us who planted their roots. In fact, one of the first settlers in the territory was Hannah Cole. This woman embodied true pioneer spirit. After she and her husband moved to the area in 1810, he was killed by native Indians. She was left to raise their nine children by herself. Instead of packing it up and heading back east, she toughed it out and became the stuff of legends. Her house was used as a fort during the War of 1812, which provided safety for nearby settlers. In 1816, she was granted a license to operate the first ferry across the Missouri River between Franklin and Boonville. Talk about making your mark. As the land opened up, transportation became a big business in Boonville. The start of the Santa Fe Trail was just across the river on the banks of what was once Franklin, Missouri. River trade flourished, as new towns popped up farther upstream. The railroad came to town and challenged the river as the transportation method of preference. With so many ways to move cargo, Boonville was a sought after location during the Civil War. The city was growing and with it came the necessary support system. The local jail was kept busy by rowdy trails-men and even some notorious outlaws. Frank James, of James Gang fame, spent some time in the Cooper County Jail. Of course, we had visited another jail in Missouri that had him for a guest. Seems like he was well-known around these parts. When we first hit town, during our day-tripping in Boonville, we headed to the River, Rails, and Trails Museum. This place is filled with tons of information about the history of the city. It’s a great place to start your exploration. Inside, we found that as time marched forward, transportation migrated from the river, to wagons, and on to trains. Each of these modes of travel are represented in the museum. It also includes some interesting details about some of the other famous people to have visited or stayed in Boonville.

We are all aware that the advancements in travel didn’t end with the railroad. While it did have an integral role in westward expansion, even this would be pushed to the side eventually. The days of the automobile were looming in the shadows. Giving people the control over when and where they traveled opened up new freedoms. By the turn of the century, motorized vehicles were making huge bounds on replacing the locomotive for independent travel. A slew of automakers were found across the nation, but some offered vehicles that were considered the “cream of the crop”. We had a chance to see many of them up close during a stop at the Mitchell Car Museum.

Before beginning a driving tour of the beautiful homes found in and around the city, we decided to stop for a quick bite. Day-tripping in Boonville had worked up our appetites and we were fortunate to find Taylor’s Bake Shop ready to serve. It was a little too late for coffee, so we traded up to sandwiches and salads. During this stop, we met some locals and had a pleasant conversation about traveling. We love being able to connect with the residents of the destinations that we visit. 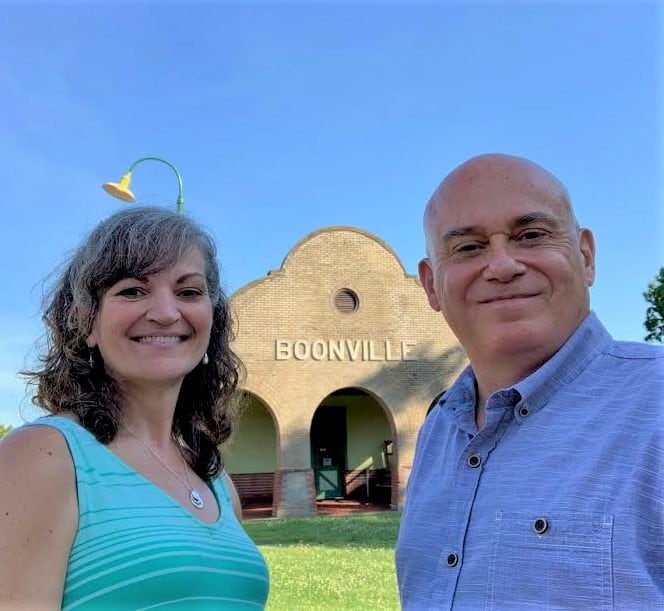 After taking in some of the architecture from the 1800s, it was time for us to head on down the road. Day-tripping in Boonville had reminded us of the progression of travel that happened over the course of a short period. When we think about how our forefathers had to cross the prairies in wagons in the mid-1800s, it was only a half-century until automobiles made their appearance. There are many cities that did not see as many modes of transportation being used, as they have in Boonville. Clearly this city was meant to be on the move. Doesn’t this look like a great day-trip destination?