Traveling the interstate between Kansas City and St. Louis takes you through Boone’s Lick Country. If you are like us, you were completely unaware of this. On a sunny Saturday, we decided to make a day trip to Arrow Rock, Missouri to learn more about this area with an unusual name. While this small village is just located inside of the region, it is home to the Arrow Rock State Historic Site Visitor Center. We made this our first stop since we wanted to educate ourselves on life in the Boone’s Lick. It’s nice visiting museums that deal with events in chronological order. Here we started with the earliest human inhabitants. While there were various tribes that passed through the region, the museum focuses on two major groups. The Osage and Missouria tribes were living their life in the Boone’s Lick region for generations. No one knows the exact timing of the first inhabitants, as history has not dwelt in this region. What is known is that the Osage were impressive people to behold. Few stood below 6 feet tall, and many reached closer to 7 feet. While other tribes lived in the region, the Osage ruled the land. Late in the 17th century, French explorers made their way down the Mississippi to the Missouri River. (Something we learned during our visit to Quebec City.) As they explored the area, they created names for the people and places they experienced. A misunderstanding is probably responsible for the state of Missouri’s name. When asking about the tribe that lived beside the river, their guides called them “Mihsoori”. This roughly translates to “people of the wooden canoes” (dugouts). History has shown that once a name was affixed on a map, it would usually stick and become part of history. 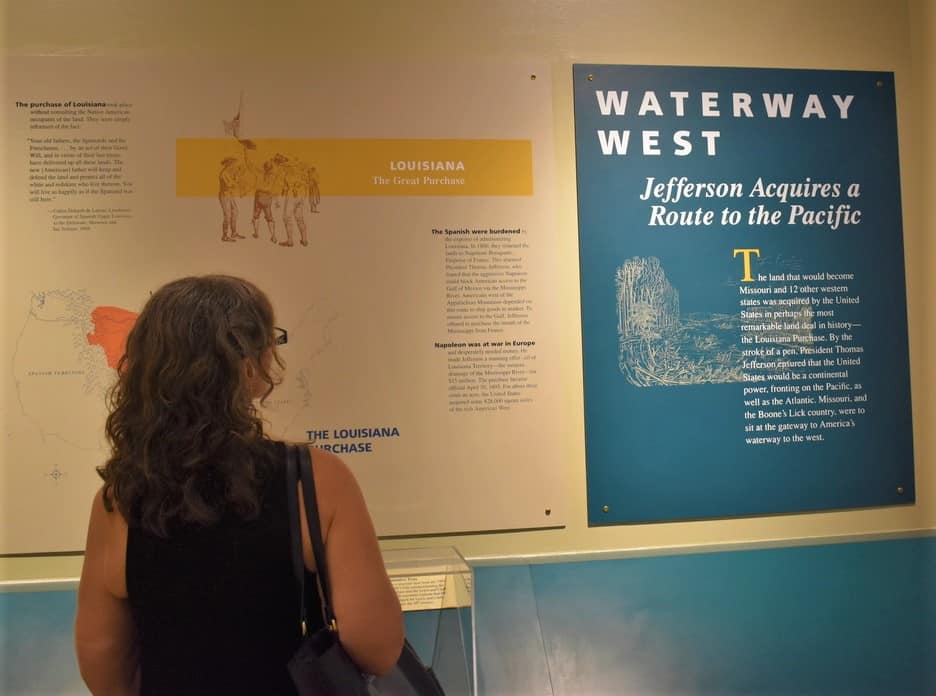 During the mid to late 1700s, more immigrants found their way into Boone’s Lick territory. In 1803, Thomas Jefferson completed the Louisiana Purchase, which opened up the lands for settlers. The next year, Lewis and Clark would begin their historical journey to map these new lands. Fast forward another year and you would find Daniel Boone’s sons had discovered a salt lick in nearby Howard County. Salt production was about to begin in earnest, and the path through this region was named the Boone’s Lick Trail. This precursor to the Santa Fe Trail led from St. Charles to the ferry crossing at Arrow Rock.

The production process for retrieving the salt from the water is fairly straightforward but labor-intensive. A stone furnace must be constructed for heating the water. Large iron kettles are used for this step. As the water evaporates, the salt residue is left behind. This process required plenty of wood as fuel for the furnaces. Before long the nearby area had been cleared. It is estimated that by the end of the operation wood was being brought from nearly four miles away to feed the operation. Getting Product to the People

Once the work of gathering the salt was complete, it still had to be moved to markets. Wagons were loaded with barrels of salt to be transported to towns nearby. With the Missouri River in close proximity, much of the salt could be transported by keelboat downriver to St. Louis. Salt was an important commodity for taming the wilderness. Besides its obvious use as a seasoning, it was used to tan hides and preserve meats. Conflict in the Heartland

Even as this enterprise was growing, struggles were occurring around the country. By 1810, an impending conflict with Britain was looming on the horizon. The region was already feeling a growing sense of unrest from the Osage tribe who had partnered with the English troops. While actual conflict with British troops was mostly restricted to the eastern seaboard, the central region of the continent did not remain at peace. Life in the Boone’s Lick region included skirmishes with the warring Indian tribes. Salt production was halted during the War of 1812 and would not resume until peace was made in 1815. 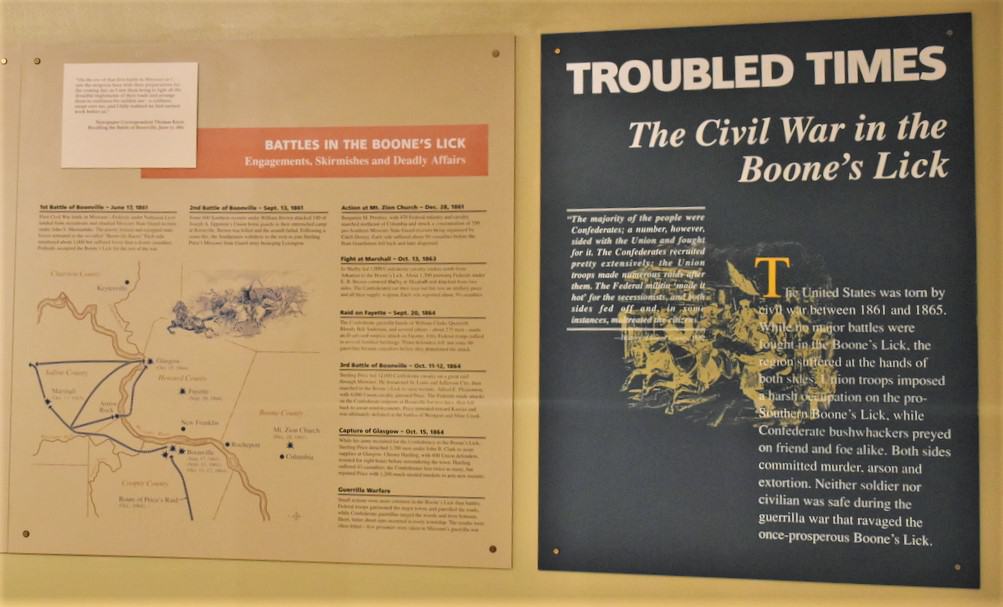 War Comes to the Midwest

Missouri entered the union in 1821 and was decreed a slave state. Due to the terms of the “Missouri Compromise”, no other states would be allowed this designation so far north. New residents flooded into Missouri from many of the southern states. There was also a steady flow of easterners looking for space in this new frontier. The central region of Missouri, including the Boone’s Lick area, would end up with the highest concentration of slave owners. To people who frequented the region, it often was referred to as “Little Dixie”. Many historians believe that the conflicts that arose in Missouri were the seeds that created the Civil War.

The well-documented “Border War” grew from a war of words into an armed guerilla conflict, during the 1850s. As the Kansas territory sat at the eve of statehood, Congress ruled that each state would choose its own designation by popular vote. This action would lead to mass migration into Kansas territory as each side attempted to turn the polls in their favor. This would lead to armed actions on both sides of the slavery issue and eventually spark the country’s Civil War. As we explored the Arrow Rock Visitors Center, we discovered plenty of interesting artifacts. These helped us get a better perspective of life in the Boone’s Lick region. As we all know, many small communities came and went during the taming of the west. These days there are still a number of towns and cities that have survived. Each has its own distinct flavor and history. Our plans are to seek out interesting sites around the region and explore them in detail. We hope that by sharing a taste of each one, you will be spurred to make a pilgrimage to see them for yourself. After all, we believe that this type of travel is a form of continuing education that can be accomplished at all ages. Travel safely!