Our Epic Road Trip was off to an amazing start. We were winding down Day 1, and we had already discovered three fun stops. Heading west out of Mitchell, we made our way across the flat prairie. Our first leg included 500 miles of beautiful scenery, as we traversed across Iowa and into South Dakota. Since our driving was almost finished, we began turning our thoughts to the next day. It held the promise of being just as thrill-packed and would begin with some alien landscape. For now, we were rolling down the road toward a restful night’s sleep. 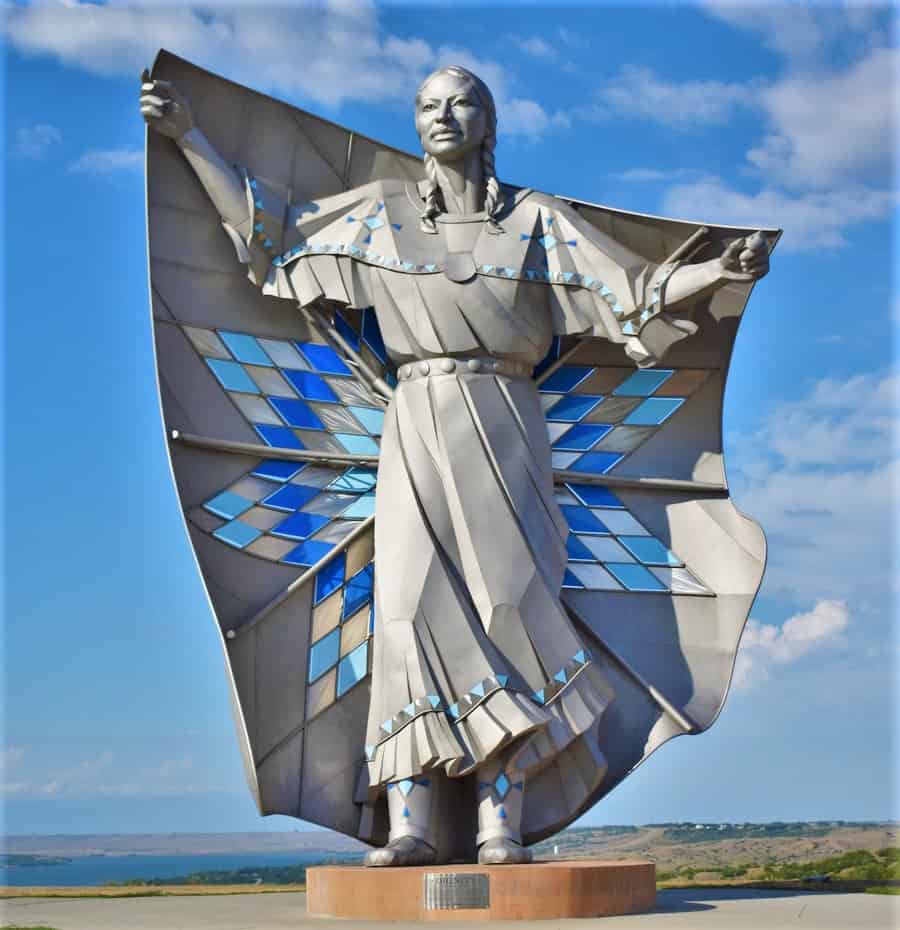 Our goal was to make it to the Missouri River. It was a little surreal to think we had driven so far to wind back up at the same waterway that runs through our hometown. Just before making it to the shores of the “Big Muddy”, we spotted one last rest stop. This one was quite a bit different from the ones we have previously visited. It is home to Dignity of Earth and Sky. This 50-foot statue is adorned with 128 diamond-shaped panels that represent the surrounding landscape that is all around. It was erected in honor of the Native Tribes who called this region home. As we stood at the pavilion, we could see the river running in the distance and knew we were close to the end of our day. After a solid rest, we made an early start for Day 2. We were facing another 500+ miles day, so we left our hotel before daybreak. We started by locating some coffee, a requirement for successful exploring, in our opinion. Our first attraction was a couple of hours down the road. The slow-rolling hills belied the natural beauty that was just beyond the horizon. We arrived at Badlands National Park just as the sun was rising. Before we could relish in a South Dakota sunrise, clouds rolled in and filled the sky. This added a layer of gray to the brown and tan landscape. Being from Kansas, we are well educated on the idea that the Great Plains were home to oceans in past eras. Layer upon layer of sediment built up the height of the land. fast-forward millenniums and the waters had receded leaving behind the open plains. Now the action of erosion took over and began carving the valleys through the land. It is easy to believe this place is part of some alien landscape. Looking out over the various hills and peaks leaves a feeling of awe. The Loop Road (Highway 240) is the main pathway for motor vehicles to pass through the park. There are about a dozen major pull-offs along the way and each offers a unique vantage point. At various stops, we found signage that gave some insight into this natural attraction. The one above speaks on the Wall, which is the heart of Badlands National Park. Seeing the 1920s vehicles navigating the frontier reminded us of the adventures enjoyed by those who came before us. To truly experience the badlands, we suggest getting out of your car and into the park. There are a number of trails that offer up-close looks at the alien landscape. The park department has built some raised deck walks that are accessible to a wide range of visitors. There are other trails that require more vigorous exertion. Whatever your skill level, you’ll find ways to get closer to nature. Making an early morning visit opened up the window for wildlife viewing. Even though our visit was in late August, a cool wind was blowing in from the northwest. That didn’t prevent some of the local residents from getting out for a morning meal. Our hope was to spot a few different species since there is an impressive number that calls the Badlands home. With traffic on our tail, we missed a chance to capture images of some Bighorn Sheep. In the end, it was this one lonely deer who made it in front of our camera lens. Our last visit to this area had been way back in the early 1990s. At that time, we were making memories with our kids in tow, so this couple’s trip was a bit different. Time has had its effects on us, just as it has on the alien landscape of Badlands National Park. We feel that we’ve held up pretty well, but then so has this landscape. We hope you have a chance to visit this national treasure and see the natural beauty for yourself. It was the perfect way to start our day.