Part of exploring a new destination should always include learning some of the histories of the region. Since almost every city and town has at least one local history museum, it’s easy to have a cultural connection. For years we have been exploring various sites and devouring the information we find at each one. These days technology is starting to offer unique ways to immerse ourselves in the storyline of new destinations. During our visit to Quebec City, we dropped into Immersion Quebec to take a virtual history tour of the oldest city in Canada.

We want to thank Quebec City Tourism and Immersion Quebec for hosting our visit. Rest assured all opinions are our own.

Our visit to the Musee du Fort had given us a good background on one of Quebec City’s most notable historical events. With this knowledge fresh in our minds, we stopped at Immersion Quebec for a virtual history tour. The staff members were very welcoming and walked us through the three-phase experience. The whole event lasts for about 1 1/2 hours, so we felt that the admission price was quite reasonable. It was determined that our first experience would be the VR Phase (Virtual Reality). Participants are invited to gear up for a walk through the early days of Quebec City. Goggles and headphones help visitors immerse themselves in the whole experience. Once we were all geared up, it was time to get ready to travel through time. The tour is available in French, English, Spanish, and Mandarin languages. With three phases included in a visit, the staff has options to get new groups engaged quickly. There was a group competing in the GO Phase, (We’ll go over that in a bit.) so that is why we started with the virtual history tour portion. Now that we were all set, the staff member started up the video and we were whisked back in time.

As you can see from the preview video above, the virtual history tour takes visitors back to the earliest days of human inhabitation in this region. As we moved forward in time, we learned about the natives who were already in the area when the first European explorers arrived. The founding of Quebec City fills a portion of the show, before giving way to the significant battle for control of the territory. After this tumultuous period, we were led through the period of industrial revolution and growth that has made the city so successful. When you are in this portion of the visit, be sure to look all around, since the virtual experience covers 360° of your field of view. I enjoyed watching the birds and clouds pass by overhead, as well as seeing the various people on the edges of the main scene.

Now that we had a working knowledge of the history of Quebec City, it was time to put it to test our retention. During the XP Phase, visitors explore the main space of Immersion Quebec, while they study a series of displays. First, we had to create avatars on our hand-held tablets. This place really engages technology to help bring the past to life. Once we had our characters selected, we could make our way to the checkpoints. 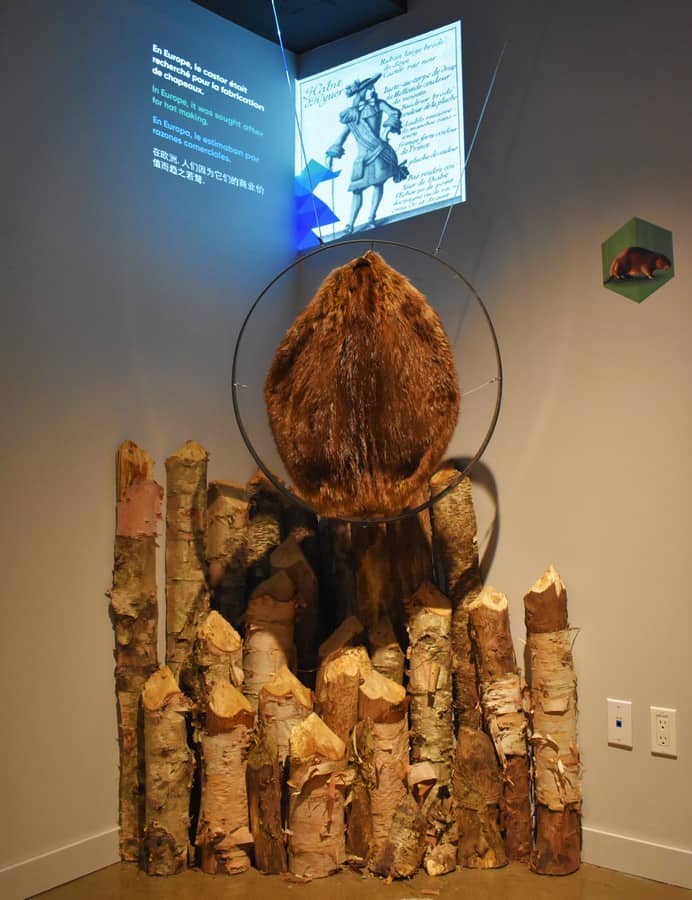 Each exhibit offered a glimpse into a different aspect of life and business in the Quebec City region. One exhibit explored the chain of forts that would have been found all across the North American continent. Obviously, many of these fell to the wayside as the wildlands became tamed. Another display explored the wildlife that drew trappers to the lands. Here they found an abundance of beaver to harvest for their desirable pelts. The beaver became such an important part of life that it actually appears on the multiple coat-of-arms.

Now that we had absorbed all of this Quebec history, it was time for a little friendly competition. The GO Phase pits each person, by means of their avatars, in a head-to-head trivia contest. A series of questions are asked, that focus on topics shown during the virtual history tour or at one of the learning stations. With each question being multiple-choice, everyone has a chance to get them right. Each player’s avatar is positioned in a barrel at the top of Montmorency Falls. With each incorrect answer, the avatar inches closer to the edge of the falls. The contest is completed when only one player remains above the falls. For our competition, I came out as the victor. We wrapped up our virtual history tour and thanked the staff for all of their assistance. It was obvious that they enjoy seeing others immerse themselves in their city’s history. Even before we arrived in Quebec City, we knew that learning more about this beautiful city would be a high priority. Being surrounded by the over 300-year-old structures, really made us appreciate the stories that are held within the city’s walls. As we departed Immersion Quebec, we knew that we had a fun story of our own to share. How many of you have experienced a virtual history tour?