We find that festivals are an excellent way to really experience the culture of a city. With a distinctly Dutch heritage, we couldn’t wait to explore Pella, Iowa. Taking a Tulip Time trek to this central Iowa town was a chance to learn more about these descendants of people from the Netherlands. With little knowledge of their traditions, we hoped to immerse ourselves in the food, art, history, and entertainment. The Tulip Time event focuses on the abundant blooms that are found all around town. It certainly adds pops of color to their annual festival.

We want to thank Visit Pella and the local businesses for hosting our visit. Rest assured all opinions are our own. Let’s not dawdle getting to one of our favorite parts of visiting a new destination, the food. Having a limited background in Dutch delicacies, we were anxious to see what we would find. My research turned up a lot of bakeries and a healthy number of meat and cheese shops. It was looking to be a great visit. After all, who doesn’t enjoy the opportunity to assemble the ingredients for a delectable charcuterie board? Of course, we can’t pass up a chance to sample festival food, especially when prepared by local organizations. During Tulip Time, you might find longer lines than normal, so be sure to visit your top picks early. 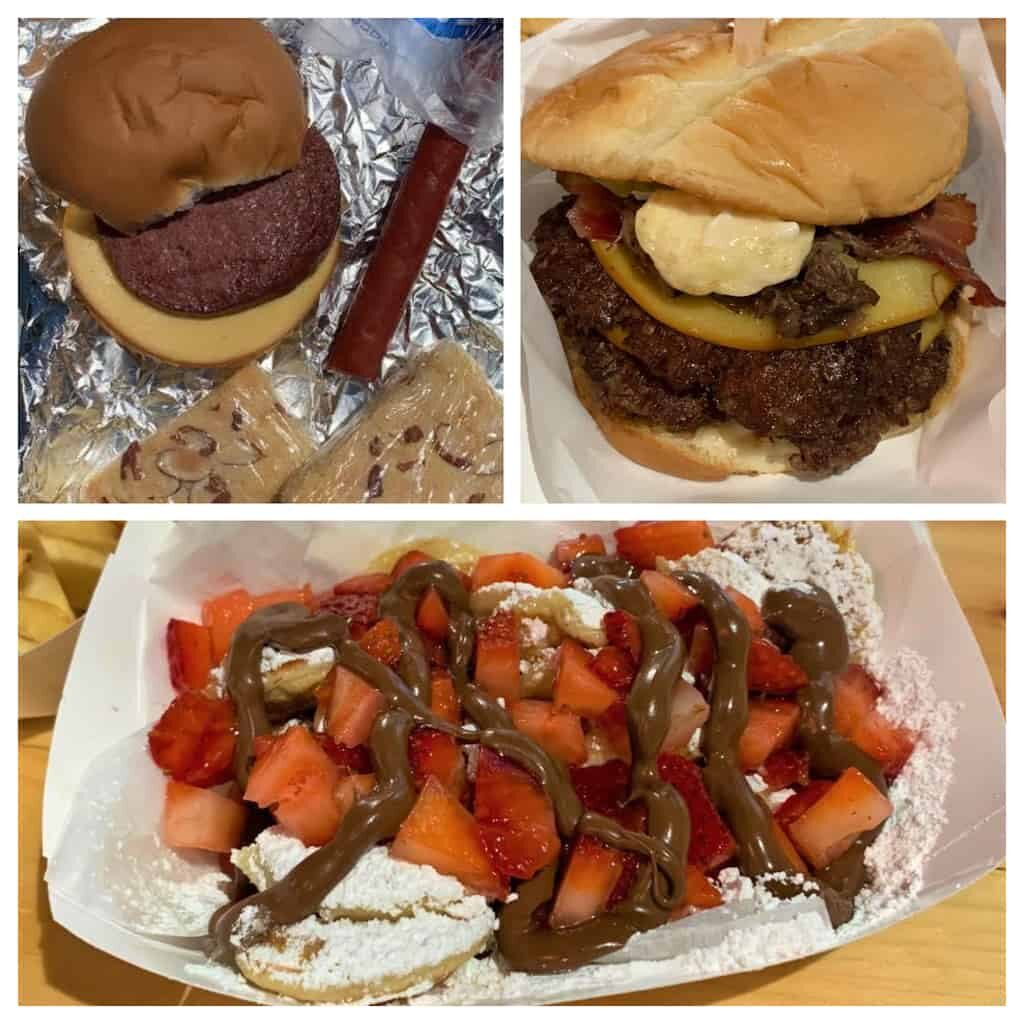 With so many delicious bites to sample, and so little time, we went quickly to work checking out the local fare. Treats like Dutch bologna, Gouda cheese, and Poffertjes were top on our list. We also sampled some of the local pastries, including the much sought-after Dutch letters. It’s hard to know just how authentic everything was, but suffice to say it was all delectable. Festivals are a great time to explore the history of a city. Most of the attractions will be open and ready for visitors since the number of volunteers swells for such events. During a walkabout town, we came upon the Tuttle Cabin, which is the oldest building in Pella. Its origin hails back to 1843 when it was constructed by settlers, This is actually before the Dutch immigrants arrived. It seemed to be a popular stop for others attending the Tulip Time festival, as well. 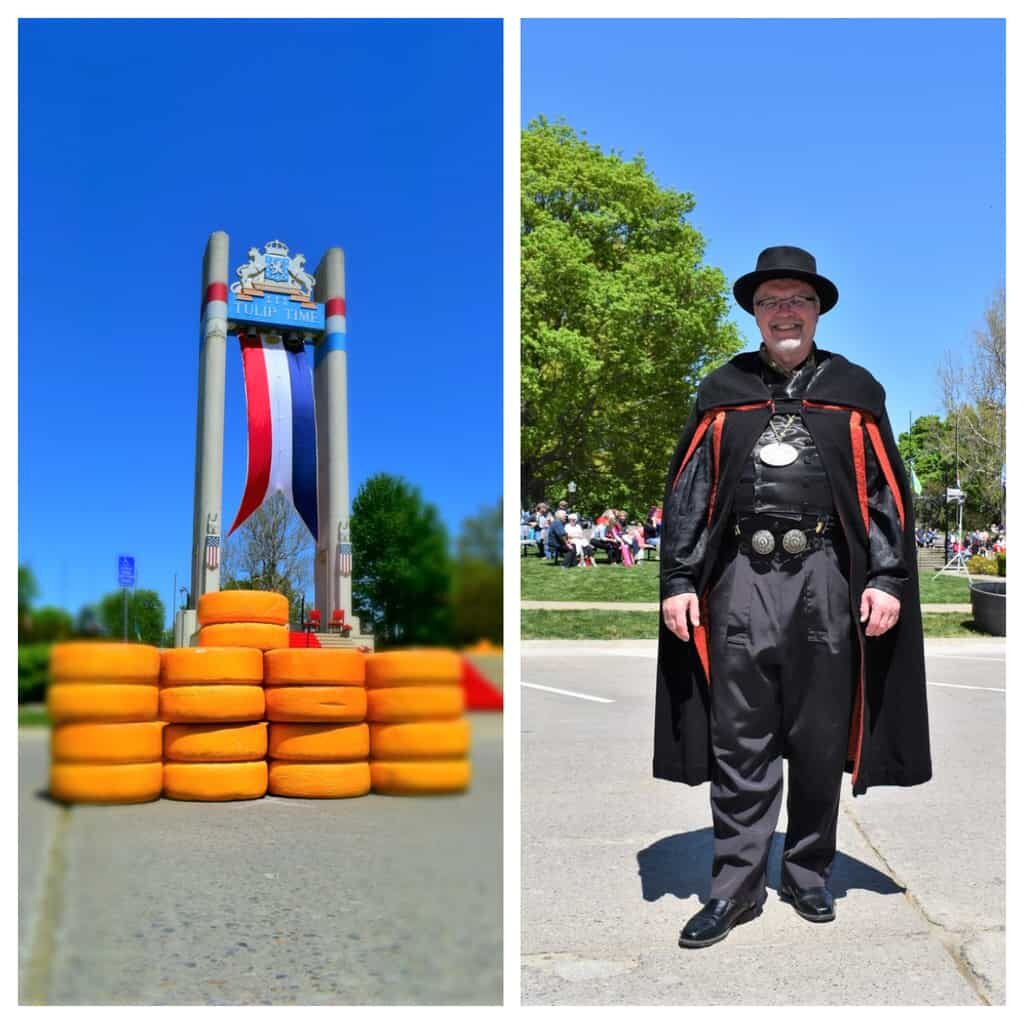 While anytime is prime for visiting Pella, attending Tulip Time brings an elevated level of excitement and an atmosphere of frivolity. The main event is the show in the town square. It’s easy to find your way as the 65-foot tall Tulip Toren marks the heart of the festivities. It is not the first Toren built on this site, as the original was a wooden version constructed in 1940. This reinforced concrete version came about in 1968 and has served as the backdrop ever since. Each spring, this three-day festival is overseen by the local Burgermeister. He serves as a Dutch master of ceremonies for the event. 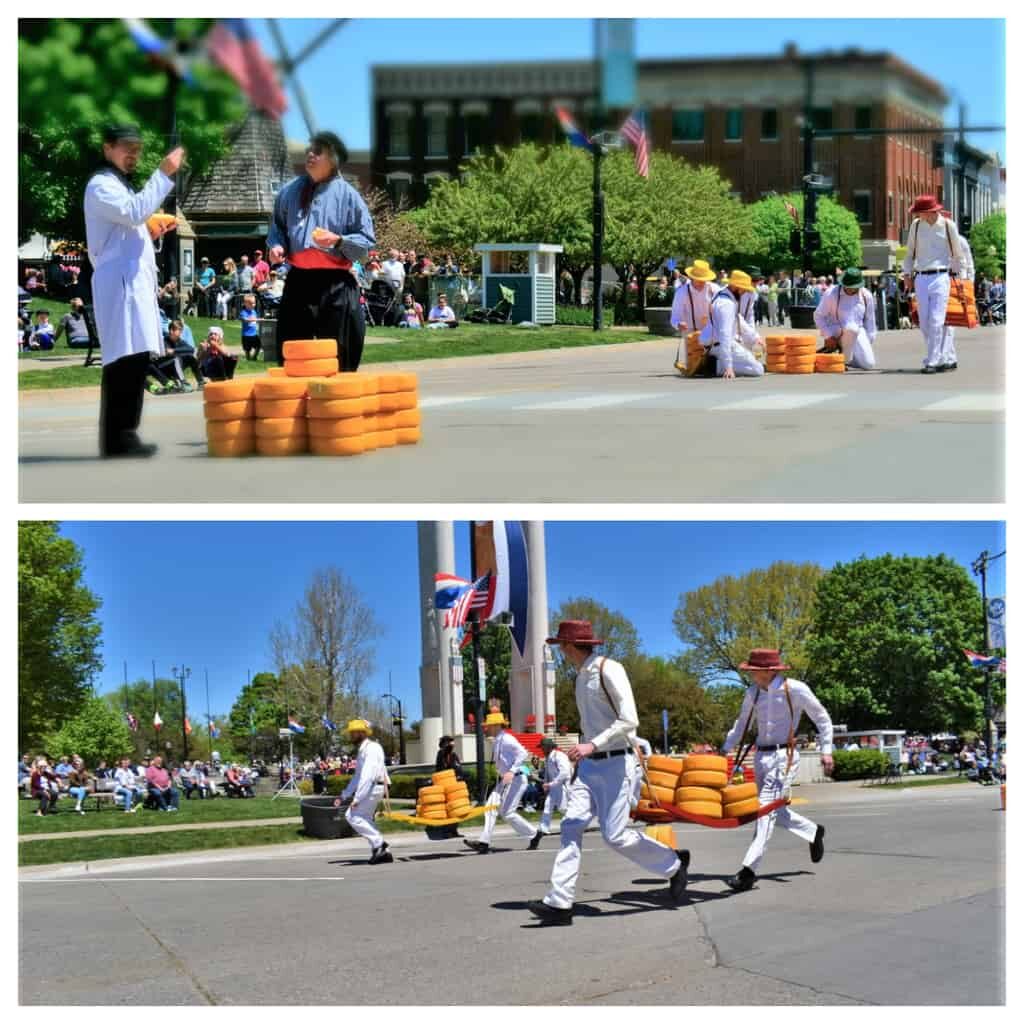 It ain’t Easy Being Cheesy

The daily exhibition roared into gear with a history lesson on the Dutch cheese market. While a variety of cheeses originated in the Netherlands, the two most familiar are Gouda and Edam. As the assembled crowd watches, the story of the markets unfolds. As with many parts of Dutch life, traditions are essential. The uniforms have been consistent for many generations. Cheese Guild members join the “Cheese Father” in the weighing square. Samplers inspect the cheese wheels before they are transported to the scales. By the way, the transports can carry over 280 lbs. of cheese at a time. To have a successful Tulip Time requires a concerted effort by a slew of locals. It appeared that they take pride in being a part of the festivities as everyone was so welcoming. While not all dressed in traditional Dutch garb, many were strutting the designs of the various provinces across the Netherlands. As the festival celebration unfolded, we learned that there are twelve distinct provinces. Many of the residents are direct descendants of the original colonists who came from their motherland. It was interesting to see the various historical outfits that are associated with each section of the country. With our history lesson complete, it’s time for some local entertainment. A throng of dancers makes their way front and center to the sound of a rhythmic clacking of wooden clogs. While we watched in amazement, the dancers performed a series of traditional steps. During a visit to the Pella History Village, we had watched this unique footwear being made. At that time we wondered how uncomfortable these would be to use. Here in front of us, we were watching dozens prancing around with ease. The dancers left the street and it was time for the most unusual activity we have witnessed. On one end of the festival bleachers, a swarm of traditionally dressed residents had assembled. Local councilmembers had deemed the streets in despicably dirty shape, so they needed a good cleaning. A signal was given and the throng of residents began their due diligence. An assortment of water bearers and scrubbers proceeded along the street, much to the delight of the audience. Even the little ones got into the action under the watchful eyes of their parents. With the streets back in acceptable condition, it was time for the annual parade. Covid was still playing a part in the activities, even though the restrictions were being lifted. The town planned a shortened version that would satisfy the crowds without jeopardizing their safety. We watched as a group of costumed vendors wheeled their wagons to market. These brightly colored vehicles had also been viewed in the Pella History Village. Now we could better understand their use. To capture a good understanding of the Tulip Time festival means at least a one-night stay. Pella is home to an assortment of lodging options. One that keeps you in the heart of the action is The Amsterdam Hotel. Located right off the main square, it afforded us a spot for a quick break from the action, when needed. It also allowed us a restful night’s sleep without traversing the traffic around town. It also features a top-notch in-house restaurant named Liberty Street Kitchen. We actually found a short escape from the crowds on the street with a relaxing dinner at the hotel eatery. A refreshing cocktail recharged our senses and we were soon back in the mix. Two days of festival time gave us a great overview of Dutch history and traditions. Learning about other people’s cultures helps us gain an understanding of their views of the world. This helps us piece together the tapestry of lives that make up our melting pot called America. Are you convinced to give Tulip Time a try now?

Pin for a reminder of the Tulip Time Festival!