We never cease to be amazed at the history we find in each city we visit. It’s true that every place is filled with its own set of stories, and it is up to the visitor to seek them out. A trip to Fort Scott, Kansas provided an opportunity to learn more about one of the most influential African American photographers in our country’s history. Gordon Roger Alexander Buchanan Parks hails from this frontier fort city, but his impact was felt all around the world. While his story is one of immense success, it also teaches the importance of perseverance.

Gordon Parks grew up in an era of segregation. He was born in Fort Scott in 1912, and was the youngest of 15 children. The elementary schools in town were segregated, but the city wasn’t large enough to support this separation at the high school level. While black children were allowed to attend the high school, they were prohibited from being involved in social or sports activities. This didn’t prevent his family from building relationships within the community. The lessons that Gordon learned at church would be the guiding spark that kept him going through times of struggle. At the age of 14, Parks mother passed away, and he was forced to move to St. Paul, Minnesota to live with a sister. By the age of 15, he was out on the streets fending for himself. He worked odd jobs to survive and even played on a semi-pro basketball team.

His Weapon of Choice

The stock market crash of 1929 sent him moving around and by the age of 25, he landed in Seattle, Washington. At a local pawn shop, Gordon purchased his first camera. He set about teaching himself photography and was quick to develop his own style. A photography clerk clued him in on a fashion assignment back in St. Paul, where his photos caught the eye of the wife of heavyweight boxing champion Joe Louis. Moving next to Chicago, Parks and his wife Sally set up a portrait business for wealthy socialites. In his free time, Gordon would capture images of the struggles of African Americans throughout the city. This work would lead him to notable acclaim, and he was asked to help chronicle the social conditions in America. By 1940, Gordon Parks had begun to gain notoriety for his strikingly honest portrayal of segregation in America. Using his camera as a weapon for change, he produced a series of photographs that won him a fellowship with the FSA (Farm Security Administration). His images were becoming too difficult for mainstream America to stomach, and he was asked to be more subtle in his choices of subjects. Parks would find that acceptance of the reality in his images would take decades. He was learning the importance of perseverance. His acclaim led him to more and more assignments. During World War II, Gordon would work on the Standard Oil Photography Project. His assignment was to capture images of industry and small towns. After this project, Parks returned to the fashion world to work for Vogue, where he developed his unique style for photographing models in action. While working for the magazine, Gordon was able to publish his first two photography books. In 1948, Parks produced a series on a Harlem gang leader, which led to a staff position on Life magazine. He would continue doing work for this illustrious publication for the next twenty years. The subjects of his photographs would include fashion, celebrities, sports, and racial segregation. He had finally found his way to a stage that allowed him to show America the injustice that existed throughout the nation. By the 1950’s, Gordon Parks was working as a consultant for an assortment of Hollywood productions. This sparked his interest in films, and soon he was directing his own series of documentaries about ghetto life. Parks returned to his hometown of Fort Scott to direct his first feature, The Learning Tree. This 1969 drama was based on a novel written by Parks, and loosely mimics some of the struggles he faced during his youth. Gordon’s involvement in the movie also included writing the screenplay and assisting with the musical score. With a success under his belt, he proceeded to direct additional movies. His 1971 hit, Shaft, sparked the frenzy of blaxploitation flicks that became popular in the 1970’s. He also directed an assortment of “made for television” movies in the 1980’s. Our visit to Fort Scott had landed us at the Gordon Parks Museum, at the Fort Scott Community College. Inside we found a gallery dedicated to the memory of this important American media icon. Along with an assortment of informational boards, we also saw personal effects from Parks’ life. Along the wall in the main portion of the exhibit, they display 30 of Parks’ most memorable photographs. These were gifted to the museum by Parks in 2004. After his death in 2006, many more items were donated to the museum by Parks’ family.

The Importance of Perseverance

As we looked around the gallery, we came upon a set of cabinets that hold some of the many awards and accolades that were bestowed to Gordon Parks. When we thought of the struggles that he faced in his youth, it was obvious that this man understood the importance of perseverance. His accomplishments make up such a long list, that it is dizzying to imagine how he overcame so many limitations. It reminded us of another Midwestern city resident who rose to fame. (You can read about Joplin’s George Washington Carver here.) 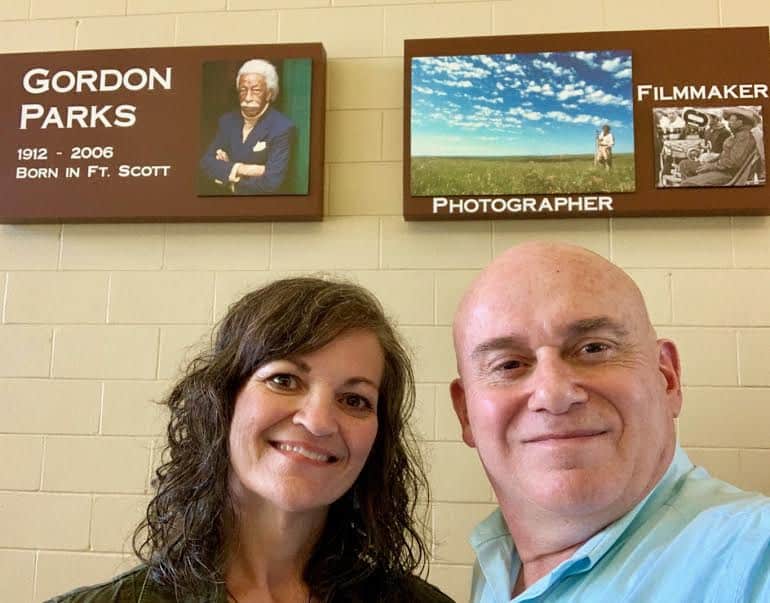 Once again, we were pleased to find a hidden gem filled with historical significance. Having the opportunity to learn more about the people who have played a dynamic role in molding the atmosphere of our country is an honor. Finding the Gordon Parks Museum was especially poignant, as we had been introduced to a fascinating display of his work during our visit to the McClung Museum in Knoxville, Tennessee. During that visit, we were examining his civil rights photography. We never realized we were seeing the work of a fellow Kansan. It goes to show that you never know when or where you will find common ground with others. We guess that it is a lesson of the importance of perseverance for us. How many of you are familiar with Gordon Parks’ work?