The Armourdale section of Kansas City, Kansas is filled with small businesses and hard working families. Restaurants in the area, like El Pollo Rey, may cater to the local residents, but their creations draw customers from all around the metro. Many of the buildings, that house these restaurants, have been home to a variety of businesses in the past. An example of this, is the building at 901 Kansas Avenue. During its time as a Dairy Queen, we would frequent it on Wednesday evenings, after church services. Of course, this was during my younger years. Since those days, we have not frequented any of the numerous businesses that have occupied the grounds, until we stopped in to sample the smoky goodness that comes from the current resident. 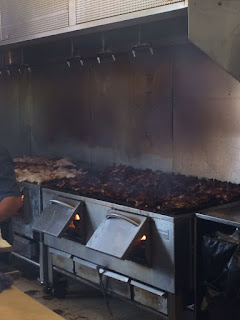 El Pollo Rey has a business model focused on a very select menu. They cook chicken. No, they grill chicken, and it is scrumptious. As you drive down Kansas Avenue, you will often see the smoke rolling from the building. It would be easy to mistake it for a fire, as sometimes it is quite thick. If your windows are down you will be treated to a whiff of the fragrant aromas wafting from the building. The smell of smoked chicken fills the air. Stepping inside, you find that you can almost taste the air around you. 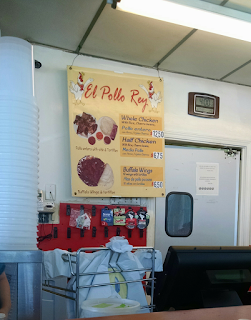 The menu at El Pollo Rey is fairly straight forward. They specialize in chicken, but they also have sides to accompany it. While the prices are slightly higher than you would pay for a rotisserie bird from a grocery store, the flavor makes the extra cost a non-issue. The flavor far surpasses that of most any other prepared bird you will find in the city. The idea is so simple that it makes the final product that much better. A half-chicken order comes in around $7.00, and is more than a meal for one. Besides the bird you will also receive sides of beans, rice, salsa, and tortillas. Don’t forget to pick up some pickled onions for an added treat. 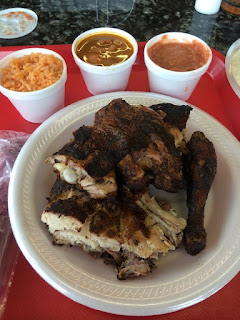 Make it a Meal

They also offer hot wings in groups of 10. We haven’t tried those yet, but others have given them rave reviews. El Pollo Rey opens at 11:00 am for the lunch crowd, and stays open until around 8:00 pm. The lines can get long and that increases the wait. many times, we have ordered our chicken, and then crossed the street to a local market. Armed with additional supplies, we head back to pick up our meal. Give them a try for some of the most flavorful chicken in town, and grab a Coke while you are there. It’s the old style made with real sugar, and not corn syrup. Now that’s some good eating.