Showing No Fear At Haunt

Showing No Fear At Haunt

When we received an invitation to the Worlds of Fun 2017 RIP Party we knew we would be in for a howling good time. The party was designed to celebrate the new season of the Halloween Haunt, which is their annual Fall festival. Living in Kansas City offers a chance to experience all four seasons, but it always seems that Autumn doesn’t last nearly long enough. The change in the weather sparks thoughts of bonfires, pumpkins, colorful leaves, and of course, the haunted houses. Now I haven’t visited a haunted house for years, and Crystal has never stepped foot in one, so we both had some adrenaline rushing as we arrived.

We want to thank the Worlds of Fun for their hospitality. Rest assured that all opinions are our own. Our day had already been filled with activities spent with the grandkids, so we were ready for a little time for just the two of us. After checking in, we made our way to the party area inside the park. Here we met up with Eric Burke, the Manager of Public Relations. He gave us a little background of what the evening held, and told us to meet him at the front of the park for the evening’s kick-off. For now, we  had the opportunity to meet some of the characters who can be found throughout the park after dark. During this special event, we savored dishes designed to showcase the flavors of Fall, many with frightening names. As guests mingled, the characters prepped us with a little pre-scare activity. Of course, the appearance of a camera quickly had them posing, instead of startling. We were quite impressed with the make-up and costumes, which certainly set them apart from some of the outfits found at other scare locations around town. After a while, we made our way back toward the park entrance for the evening’s kick-off event. Halloween Haunt runs Friday and Saturday evenings from mid-September until the end of October. Each evening, the festival begins with the Overlord’s Awakening. Crowds begin staking their place for the show abut two hours early. We were allowed access to an area that gave us an interactive view of the event. It is fairly obvious where the show will take place, as there is an over-sized gateway in between shops. While we waited for the show to begin, we noticed a stage labeled Skeleton Crew, across the way from our location. We made a mental note to check it out later in the evening. The pre-show takes a while to get rolling, so we took some time to catch a selfie. The music started up, (Glad they gave us ear plugs.) and soon the assembly began. Security made sure the crowd was at a safe distance, and we knew this was a sign for the upcoming activity.

The first arrivals were a group of hot rods driven by some very unsavory characters. The cars were very nice to see, and the crowd teemed with anticipation. The actors got out of their vehicles and wandered around the staging area, sometimes interacting with the crowd. As the music continued its ominous tone, we saw the next group approaching. Halloween Haunt features eight specific mazes. These are located throughout the park, and each has an icon to represent it. As each iconic leader approached, a group of frightening minions flowed out toward the crowd. Soon, the area was filled with creatures of all sorts, from zombies to deranged asylum patients. The frenzy grew in anticipation of the show. Now that the sun had set, the darkness began to spread across the courtyard. This was the signal for the show to begin.

Fog began pouring from the top of the gateway, and lights shone up through the rising clouds. A figure rose from the smoke, and was propelled skyward. This is the character they call “The Overlord”. The evening’s performance is titled “Overlord’s Awakening“, and it signifies the start of the evenings festivities. His voice booms, as he calls his armies into action. Each maze and scare zone is announced, and orders are given to the minions of each area. As he wraps up his orders, two other towers rise on either side. These hold the Wicked Witches of the East and West.

As you can see, the event takes place after dark, and is extremely loud. When you go be prepared for a sensory load. When the show wraps up, the parade of miscreants head off into the park to take their appropriate places, and prepare for the start of the frights. The crowd disperses, and it seemed that most knew exactly where they wanted to start their night. We decided our best approach would be to head off with no particular destination. It has usually worked well for us in the past, and you never know what you will find. To Scare or Not To Scare

All through the crowd we saw lots of glowing Frankenstein heads. These can be purchased at various vendors, and signifies to the actors that the person wearing it is off limits for scaring. Worlds of Fun also offers the Planet Snoopy area, which is a fright-free zone, but is not open on Friday evenings. It is open on Saturdays until 10:00 p.m. This area focuses on the celebration of The Great Pumpkin Fest, which has Halloween themed activities for kids. Now For An A-Mazing Night

We made our way through the park, and all around us we would hear the shrieks and screams through the clouds of fog. It was difficult to determine which were from rides, and which were from frights. Since this was our first visit, we were content to just walk the park to see what all was taking place. During our pre-event party, we had the opportunity to chat with a couple of the characters from Blood on the Bayou. This is one of the eight mazes, which are pretty much Worlds of Fun’s version of haunted houses. Unlike what can be experienced at some of the other places in the metro, at Haunt the characters do not touch guests. They have found plenty of ways to scare their visitors without this intrusion, and we were quite appreciative. Of the various mazes found throughout the park, this one was certainly the most colorful, and unique. 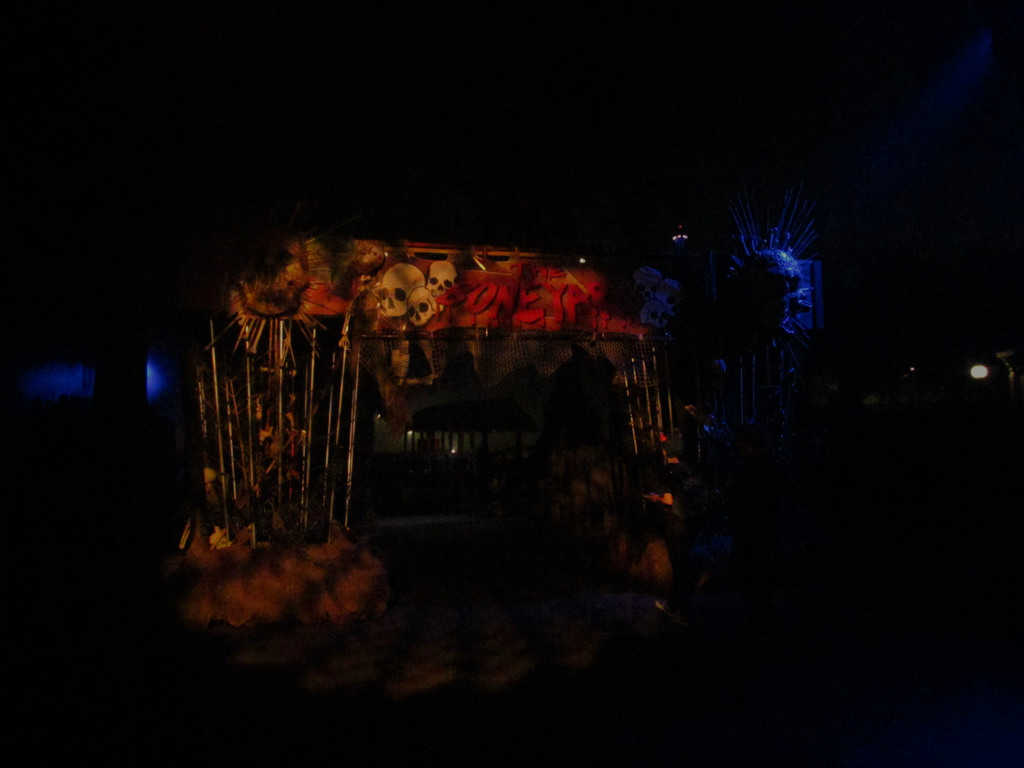 Passing Through the Scare Zones

Walking around the park required us to pass through four specific Scare Zones.  The first one we came to was the Boneyard. Located in the Africa section of the park, this area requires park visitors to navigate the scattered bones of past victims, as they attempt to escape becoming the next victim. We successfully passed through this zone, and made our way up the hill toward the back portion of the park. The screams filled the night, and off and on we would pass through areas filled with foggy patches. We discovered that most characters don’t waste much time on the older guests, and focus their scare tactics on the younger crowd. This was actually quite entertaining for us, and added a new level of fun for our visit. Worlds of Fun helps keep it’s guests in the spirit by completing the park’s transformation. All around us we saw lots of decorations that reminded us of the season. Many of these are actually animations, which play randomly throughout the evening. Others are static displays that are strategically placed through the park. Lots end up being used as backdrops for photos and selfies, and even we fell victim to this modern epidemic. While passing through the Americana section, we encountered another  scare zone. This one is the Outlaws Revenge, and is filled with a cast of renegade cowhands. These characters wear special knee-pads and gloves, that allow them to slide up on their victims with sparks shooting from their hands. We had almost completed our circuit of the park, and came to the Carnevil area, where we saw crowds passing in and out. We decided it would be our last zone, and headed in. The area is a red-tinted maze of  carny fright. Big top acts and funny mirrors dot the walk through the area. Characters interact with those passing through, with some talking and others just staring silently. The scare zones are less intense than the mazes, and are fairly mild in comparison. We will leave a lot of the details to the imagination, since it is best experienced in person. 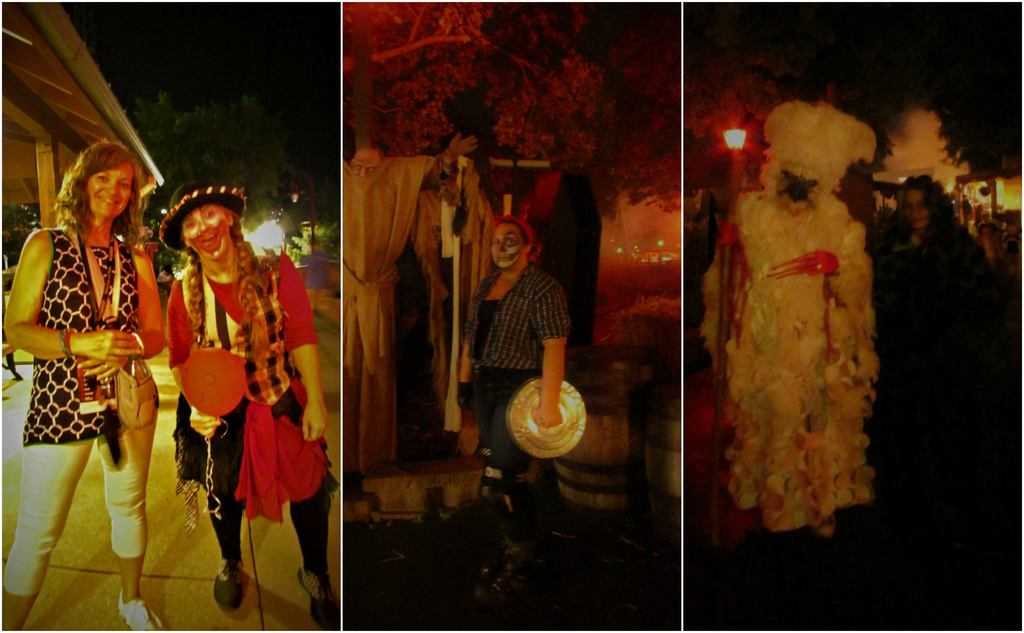 Throughout the park we would run into characters of all sorts. While their intention was to scare, producing a camera instantly brings out the showmanship in almost everybody. No one declined having their picture taken, and most were more than willing to pose. While the premise of Halloween Haunt is to scare, the actors still seem to focus first on entertaining. Everyone we met were more than helpful, when asked for directions or about other areas of the park. Most would share their personal opinions of the various mazes, which helped us maximize our time in the park. The Fright Lane Plus passes allowed us to minimize our time in line, and the skeleton key makes for a rather unique reminder of our visit.

Back to the Beginning

We completed our circuit of the park, and came full circle back to the main entrance. Our timing was perfect to catch a stage show at the Skeleton Crew stage. The show at  features a variety of acrobatics, trampoline artists, and jugglers. By now the darkness had deepened, and it was becoming difficult to record good images, so I determined to use my last shots on video. Our frightful evening was quite entertaining, and we regretted having to leave. We stayed and watched for a while, before heading toward the entrance for one last InstaStory video. Our hope is that you follow along with us on our future adventures at  https://www.instagram.com/ourchanginglives/ You can also find us on Twitter and Facebook, and we would love to connect with you there, as well. We hope you enjoyed this overview, and make your own plans to experience Halloween Haunt at Worlds of Fun.