Just about everyone who has driven by 931 Broadway, in downtown Kansas City, Missouri, has seen the bright red awning over the entrance of The Majestic Restaurant. The building started life over 100 years ago as the Fitzpatrick Saloon. Built in 1911, the same year Jim Pendergast (Boss Tom’s older brother) passed away, it housed the saloon and a bordello. At that time, it resided in the center of the city, and became a key location in its future. 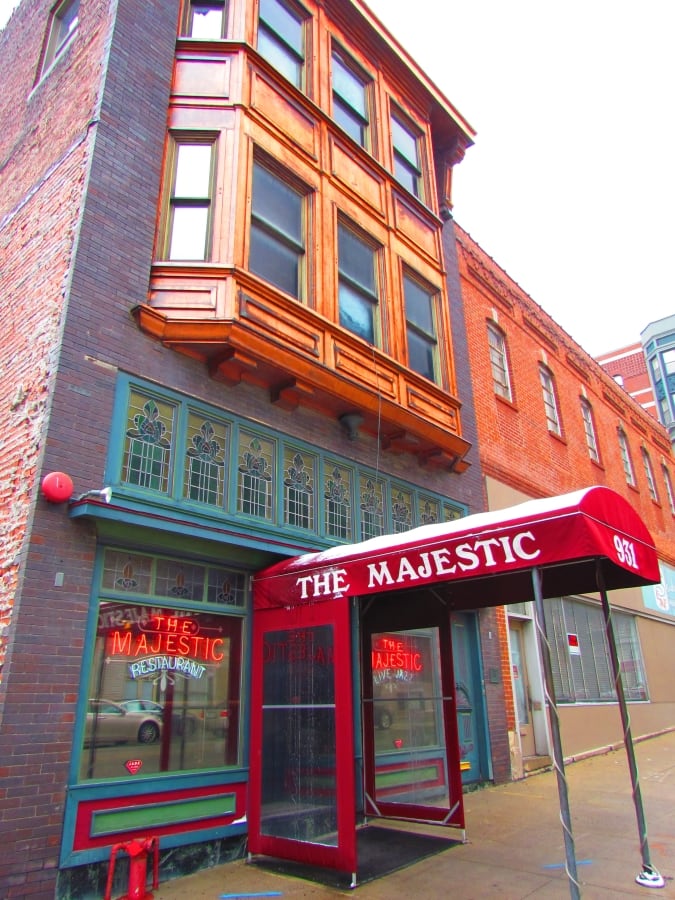 It all started when a man named James Fitzpatrick decided to build a saloon in the Quality Hill district. He succeeded with the help of Jim and “Boss Tom” Pendergast. I was offered a tour of this landmark by Brett. He is very knowledgeable on the history of the building, as well as the city in general. The main floor is where patrons drank, while the upper floors were used for more shady undertakings. Upstairs was also the living quarters for Fitzpatrick. These days the second floor of The Majestic Restaurant has been converted into the Pendergast Club. This room was used as a secondary office by “Boss Tom” Pendergast. It is here that customers can schedule a private dining and lounging experience found nowhere else in the city. As Brett explained the history of the room, I noticed that it has a fully stocked bar. The decor includes unusual Kansas City artifacts, and some very comfortable leather seating. 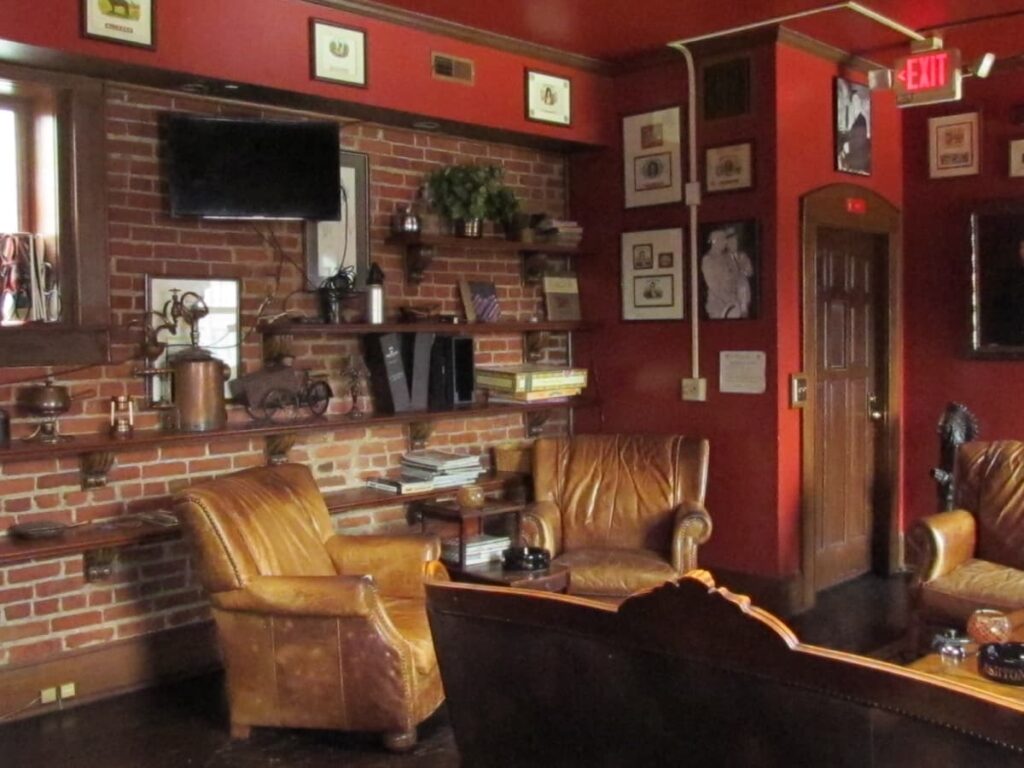 Next we head downstairs to the Jazz Club. Here is where the saloon moved its operations during Prohibition. Thirsty speakeasy patrons would enter the next building over, and then pass through via an underground tunnel. With the protection of Boss Tom, Fitzpatrick’s Saloon was able to survive Prohibition. Unfortunately, the city was changing, and the area soon became known as the Garment District. The saloon closed up shop, and converted into a garment manufacturing location. By the middle of the 20th Century, the building had fallen into disrepair and sat empty. In 1983, two Kansas City natives purchased the site, and set to work restoring its hidden beauty. They acquired a bar from New Orleans, which had been built in 1880 (pictured at the top of the article). They had it placed downstairs in the refurbished home of the Jazz Club. Patrons can enjoy live jazz music nightly, while savoring drinks and eats in an intimate setting. 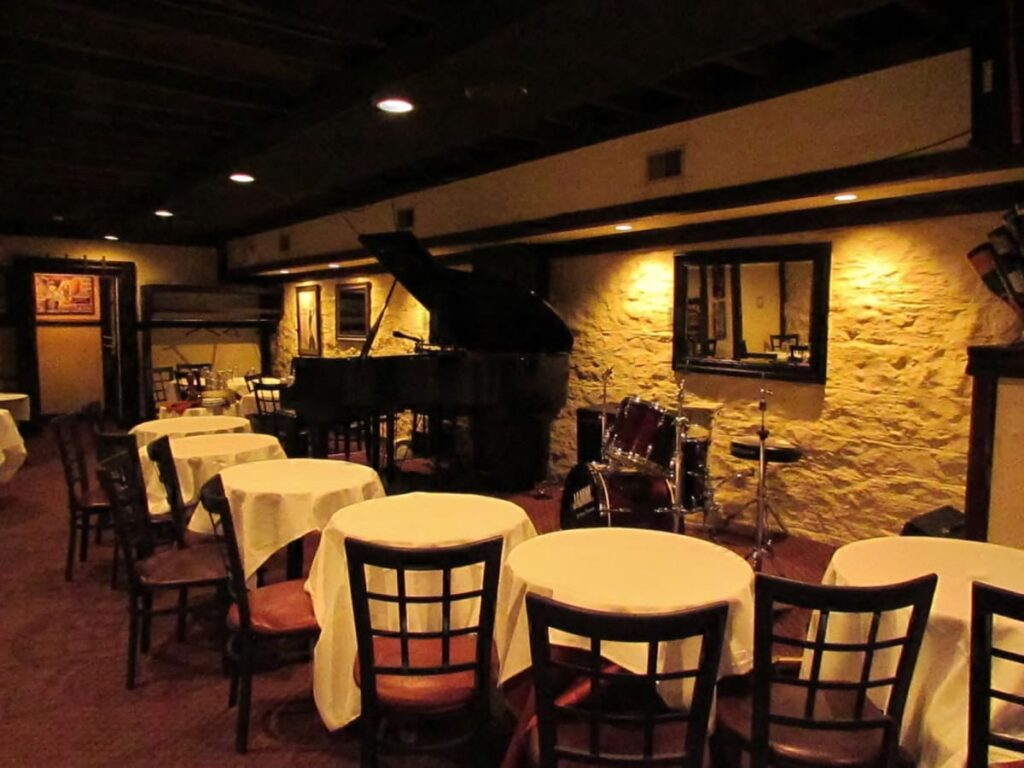 The new owners also purchased a second bar from New Orleans. This one is 40 feet long, and occupies a prime location on the main floor. During the renovation, the molded tin ceiling tiles were restored, as well as the original exterior copper façade. Local artist Jack O’Hara was commissioned to paint a mural near the entrance. It showcases more than a dozen people with strong ties to the Kansas City area. During your visit you should see how many you can identify. 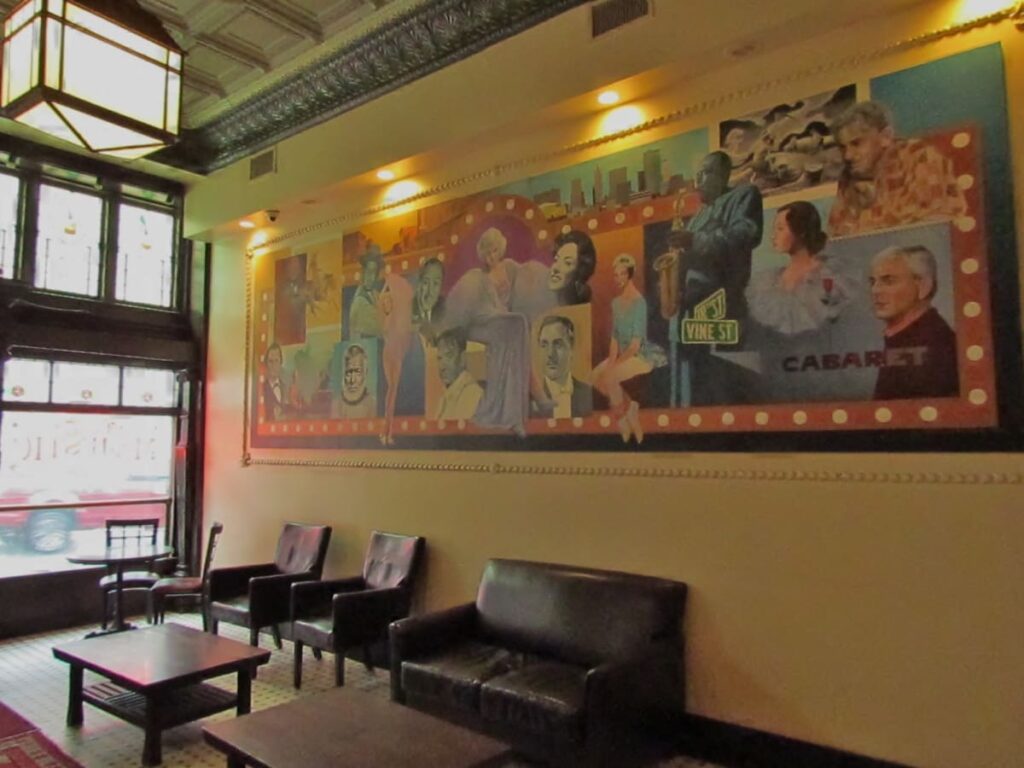 With an abundance of historical data swirling through my head, I decided I should check to see if our meals were ready. Fortunately, I made it back just in time. Crystal didn’t seem to be put out about the length of time I was gone, and I told her a little about what I had learned. Being an early Saturday afternoon, they were still serving brunch. Both of us were already well past our breakfast mode, so Crystal chose the Lemon Rosemary Chicken Salad Wrap. The meal is wrapped in a whole wheat tortilla, and offered a flavorful departure from burgers. For her side, she went with fresh fruit, which was a combination of cantaloupe, grapes, and pineapple chunks. 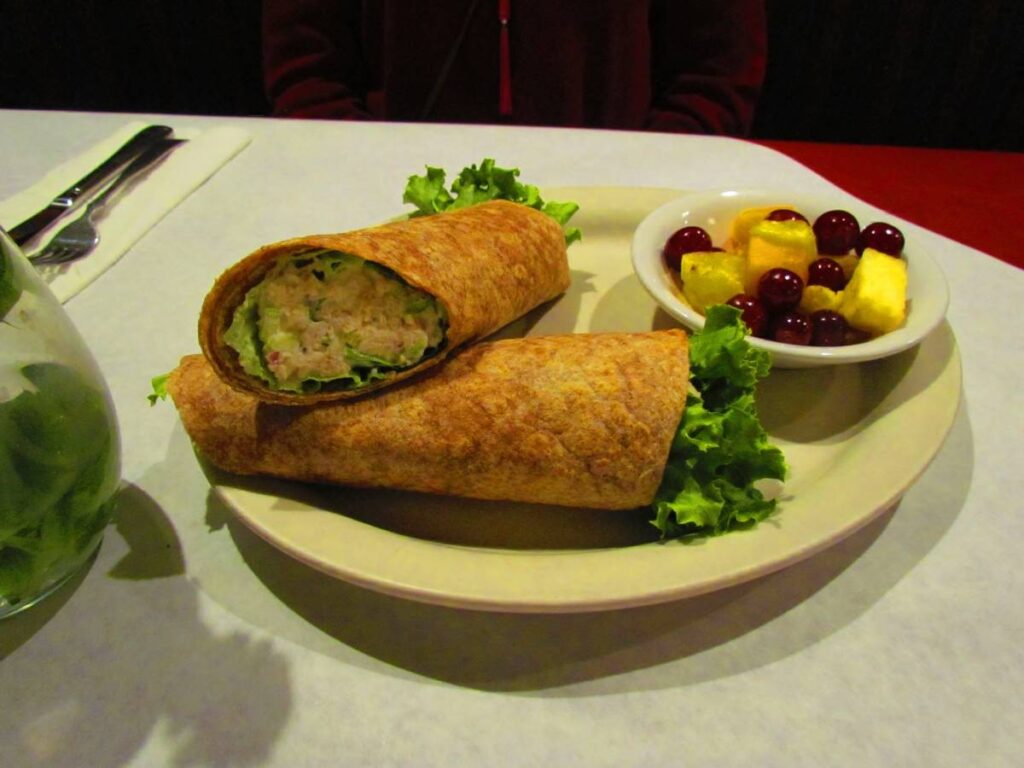 I went for a more unusual entree, and selected the Cherry Pecan Chicken with Goat Cheese. This came with two sides, so I picked the Rice Pilaf and the fruit. When it arrived I was unsure about my choice. I am usually a beef eater guy, so selecting chicken is a new thing for me. Of course, it is one that I am trying to do more often. My first bite told me that I had made a good choice. The flavor combination of the semi-sweet cherries, crunchy pecans, and tangy goat cheese burst on my taste buds. This is probably not a recipe I would have thought of on my own, so I have to give a big compliment to the person who created it. 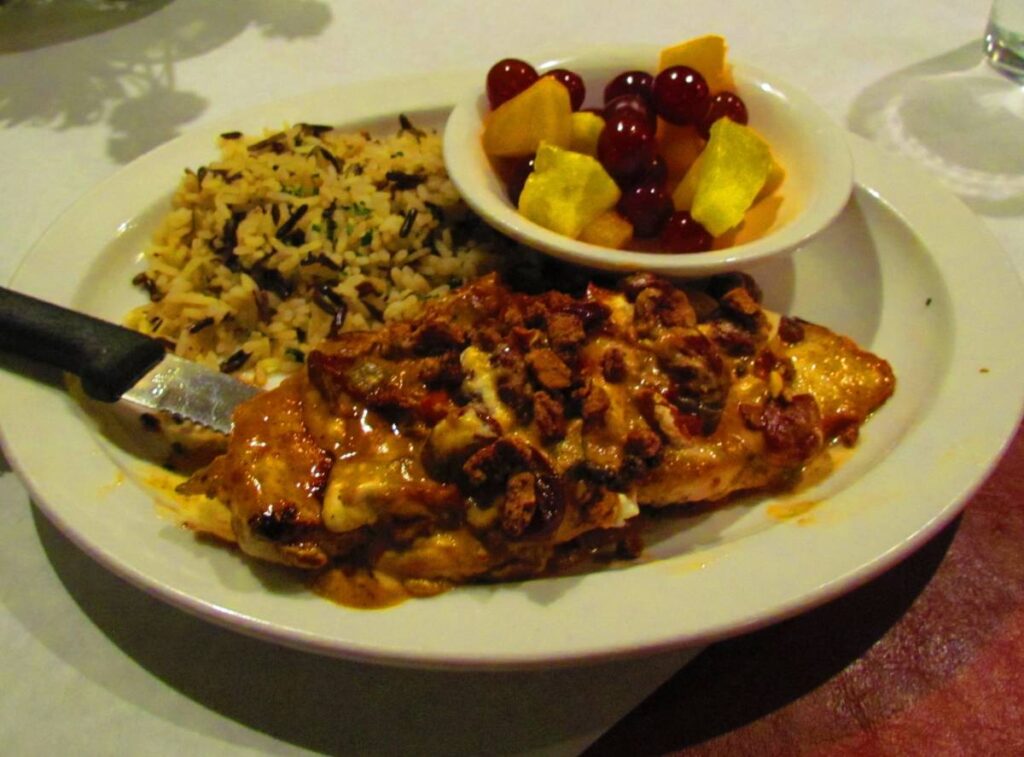 Our visit coincided with the Big 12 Tournament, and we fell into conversation with a couple sitting next to us. We learned that they were from Colorado, and have been to every Big 12 tourney for the past 28 years. They had developed their own list of favorite places in the metro. We discussed these, as well as some of our favorite places in and around Denver. It was a comfortable conversation, and it gave credit to the relaxed atmosphere found at The Majestic Restaurant. Soon we had to bid goodbye to our restaurant mates, as the tournament games were restarting. We gave our thanks to Brett for a wonderful experience, and headed out the historic entrance. Soon we found ourselves back into the present, but with a new found respect for the history of the old Fitzpatrick’s saloon.

Have you ever had the pleasure of dining at The Majestic Restaurant? Share your experiences in the comments section below.