The majority of the time Crystal and I travel by ourselves. Recently, we took a day to do some exploring in Kansas City, and were joined by our grandkids, as well as a close friend of the family. Our destination was Union Station, and one of the most anticipated stops was at Science City. It took place at the beginning of January, so obviously it was frighteningly cold. After scurrying from the car to the entrance, we quickly proceeded to the entrance just in time for the 10:00 opening.We want to thank Science City for their hospitality. Rest assured that all opinions are our own.

We stopped at ticketing to get our bracelets that show we belong for the day, and come in handy if you want to leave for a lunch break. Immediately we ran into exhibits that grabbed the attention of those leading the charge. It seemed like the first section was focused on various lighting effects. An area of fluorescent accents glowed in the black light, and it didn’t take long to notice the effects on clothing. Nearby we found a station that showcased electrical charges. It was similar to a plasma ball, except it ran up a tube. Everyone felt the need to jump in, but soon learned that touching each other during the expelled charge gave them a small static shock. Of course, this was amusing to me, but I didn’t tell them.

It took a little while, but we finally passed through the entrance corridor,and made our way into the main exhibit area. Science City doesn’t waste space, and just inside the door we ran into more interactive items. The kids found a musical instrument section, and proceeded to give us an impromptu concert. Just a few steps away, they found more lights. These are panels in the floor that change colors when stepped on. I even got in on a little of this fun. 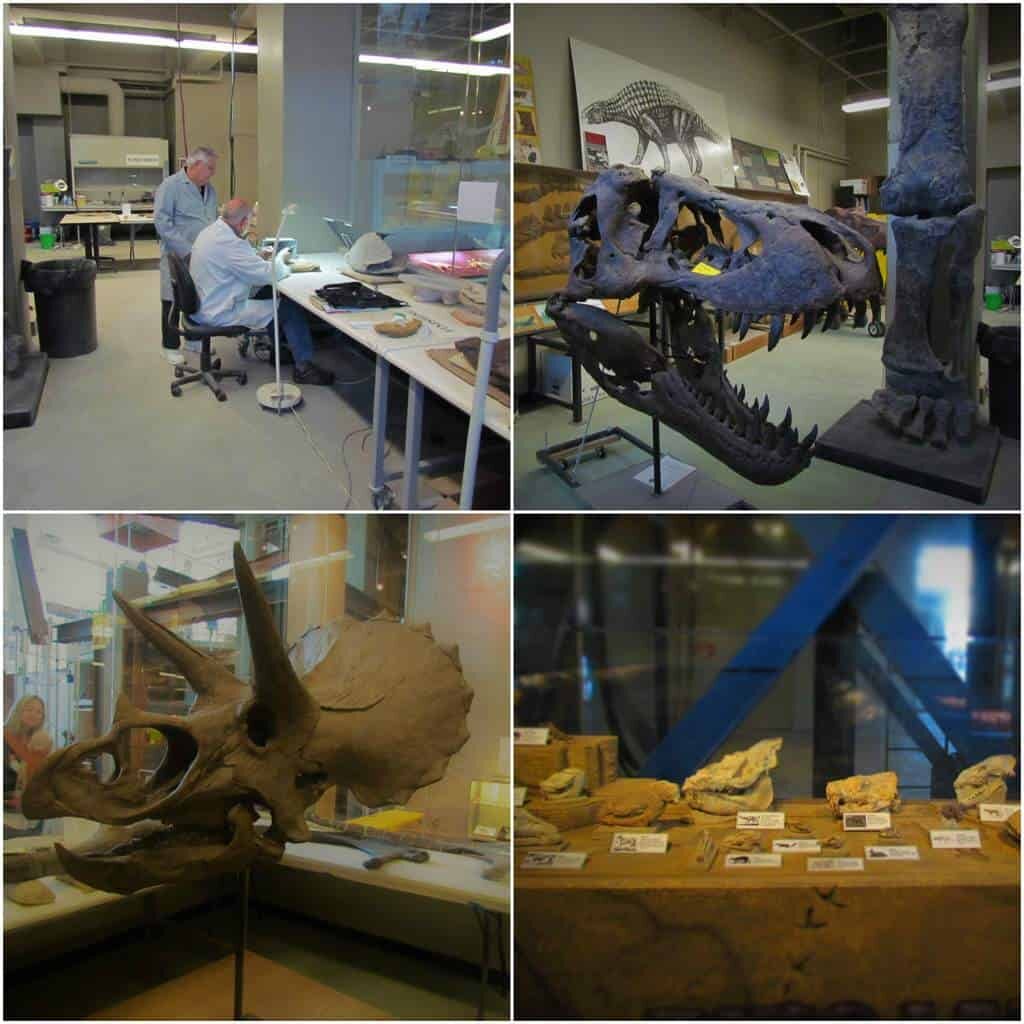 We took the stairs down, and while everyone went running around, I spotted an area filled with fossils. Being a fan of dinosaurs, I went over to check it out. One of the gentlemen inside the lab offered me entrance, which I gladly accepted. Once inside, introductions were made, and I discovered that everyone there are volunteers. They spend their time at Science City cleaning up fossils that have been shipped in plaster casts for protection. As we toured the facility, I snapped up pictures of some of the items on display. This area is encased by large windows, so it is easy for everyone to watch them work. Too soon, I had to head back to find the rest of the party. It wasn’t too difficult to locate the group, since they were hanging out in some really cool chairs. They are shaped like tops, and spin a little like them, as well. They all seemed to be having fun with these, so we watched them for a while. Eventually, like with anything, they bounced up and headed off to the next adventure.

Down a corridor we discovered the Nature Center. This area is filled with some lively specimens, which are kid size. We examined the various terrariums filled with snakes, spiders, and other creepy crawlers. At the turtles exhibit, we happened to catch a live feeding. This was an occasion to stop for a moment, and watch the activity. Before long, we were back in motion. (These kids are wearing me out!)

The Building Blocks of Life

In the Genetics section we learned about human traits. This is another section filled with interactive displays, so another beehive of activity. While Crystal and I were testing whether the statistics they display are correct, the boys made their way to an area where guests can build the DNA blocks. This is done with a floor activated design that seems to be a combination of a Dance revolution and Tetris games. It was apparent that the kids were getting to burn off some of their excess winter energy.

Just beyond this exhibit, we found the water area. I’m sure most parents are quite aware that kids have a natural attraction to water. Science City attempts to harness this into a learning exercise, where kids can see the effects of water flow. This place was extremely popular, and Crystal and I just stood back and watched the kids dive in. (Not literally!) By seeing all of the parents lingering in the area, it seems that we all had the same idea. I’m pretty sure they would have stayed in this area all day, if allowed. Time passed, and soon we needed to, as well.

I slipped away ahead of the pack, and made my way upstairs into an area designed to teach some basic principles of physics. A table was set up with a fan to show how wind acts upon various sail patterns on land speeders. Nearby, a father was helping his kids with a rocket display. Here bottles sat on a pump, that was operated by turning a handle. The kids wound up the pressure, until finally the bottle jetted upward. This room was filled with squeals of delight. There is another air powered exhibit where kids can pump up cars that shoot down a track. Moving back into the main room made me aware of just how many people were in attendance. With so many different sections, you are only seeing a small cross section of the total crowd at any one time. We found that if an area was crowded, we just moved on, and came back later. There are so many things to do, that the kids never seemed bored.

A corner of the upstairs is dedicated to exhibits showing optical illusions. The name makes it sound like it is fooling our eyes, but in reality it is our mind that is being tricked. Throughout the area we found examples that made you do a double-take.  Crystal took the opportunity to become a body-less head at a specially designed booth. One display had a series of mirrors that made it look like a giant diamond was there for the taking, but left guests empty handed. Lots of familiar pictures are scattered around that show some of the more famous brain teasers. Lunchtime had already passed, and we still had one area that the kids were eager to investigate. We made our way to an area filled with modes of transportation. Looking around, I saw kids powering light-bulbs by pedaling bicycles. Nearby, there was a line to take a spin on a human-size hamster wheel. This was a very popular exhibit, and I watched quite a few take their turn. A bicycle ride across an outstretched cable seemed to be a challenge many would attempt. Of course, I got dragged onto the helicopter that sits in front of a wall of glass. This was a surprise to me, since all we really did was sit inside. For some reason, kids are truly fascinated by this exhibit. By now it was well past the lunch hour, and time for us to bid farewell to Science City. What I learned from this visit, was that this uniquely Kansas City attraction has plenty to hold the attention of kids of all ages, and even grandparents.