Dubuque, Iowa sits along a bluff overlooking the Mississippi River. Let me clarify that by saying, part of the city sits on a bluff. The oldest portions of the city lie along the flood plain that rests beside the river. Carved out by the changing river patterns, this is home for many of the original businesses that fueled the growing city. It is also the place that we ended up riding the world’s shortest railway.

We want to thank Travel Dubuque and Fenelon Place Elevator for their hospitality. Rest assured all opinions are our own. 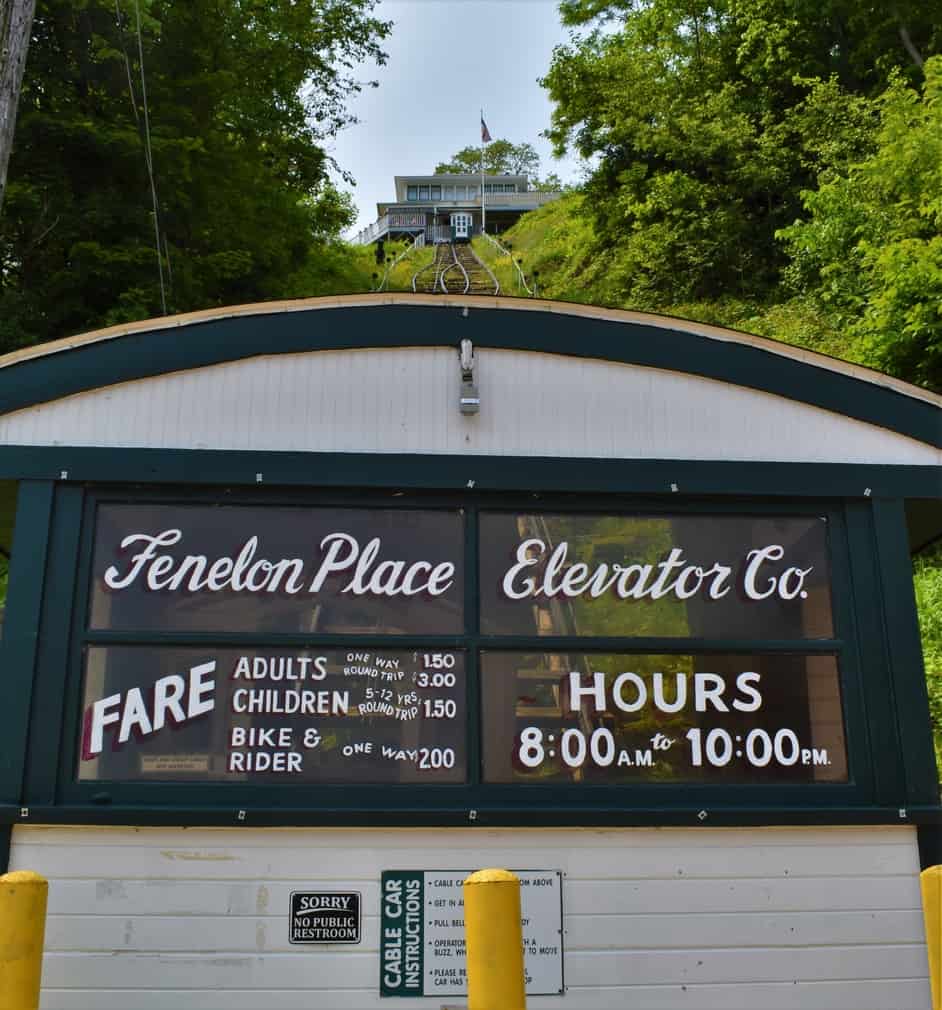 There may be some dispute over where the world’s shortest railway resides, but for us, this one certainly fits the bill. It is also safe to say that this is the steepest one we have ridden. With an ascent angle of 41°, this unique attraction bears riders up the 189-foot hillside. While many locals use this as a daily form of commuting, we were merely doing the tourist thing. A round trip is just $3.00 and offers some amazing views from the top. While the opportunity didn’t arise, we are guessing the views at night would be enchanting.

The bluff, that provides the scenic views of the surrounding region, forms a ridge that rises a couple of hundred feet above the businesses below.  These days a car will help navigate the hill in no time, but that was not the case in the early days. Many of the residents lived on top of the hill and made the daily commute down to the buildings below. The trip took about a half-hour, and was made in the morning, round-trip at lunch, and returning in the evening. In 1882, a local merchant received a franchise to build the first Swiss-style cable car.

The ridge that separates these two elevations of the city, is easily apparent, from the east. As we approached the Fenelon Place Elevator, we were amazed to watch it run. We watched as the group in front climbed aboard. The seats are positioned in rows, and once inside, you pull the rope to signal the operator on top of the hill. As the car pulls away from the station, the doors close behind you. At the same time, the second car begins its descent from above. As they approach the midway point, the tracks split to allow the two cars to pass. Once this happens, the cars return to their path and eventually wind up switching positions from bottom to top. We noticed that when the cars are passing each other, it is customary to wave to the occupants of the other car. This is definitely Midwest hospitality shining through. We watched patiently, as we waited our turn to ride the world’s shortest railway.

Earlier in the day, we had made a visit to the Mississippi River Museum, where they had a display about the Fenelon Place Elevator. It is a fairly simple process, and the exhibit does a great job at showing the scientific principle behind the design. After a stop for lunch at one of the downtown eateries, we walked a few blocks over to explore the elevator up close. (You can read about our lunch here.)

Our Turn on the World’s Shortest Railway

Standing at the base of the hill, it was our turn for a ride. We took our seats and were joined by another couple who were doing the tourist thing. Away we rose, up the hill. The ride is quite smooth, and soon we found ourselves stepping out onto the overlook above. Once we arrived at the top, we took some time to take in the view of the surrounding region. From this vantage point, we could see the oldest parts of the city laid out at our feet. The majority of our explorations would be taking place in that area, so it was exciting to have this perspective. After chatting with some other tourists, we made our way back down the world’s shortest railway.

During our walk to the Fenelon Place Elevator, we had noticed some boutique-style shops in the surrounding neighborhood. With a little free time on our hands, we decided to explore some of them. Most are housed in older buildings that appear to have originally been homes. These days they have been transformed, but the original exteriors make the neighborhood look very quaint.

Around the corner from the elevator, we found an entire street of shops. We made our way in and out of them and found that each holds something unique. Before the guys in the audience begin to cringe in fear, of a day of shopping, just know that there are things for gents to see, as well. Actually, we found some really cool stuff for guys. It was also a good opportunity to mingle with some locals and learn more about this river city. Now that we had experienced the world’s shortest railway, we were interested to see what other unique attractions Dubuque had in store for us. What’s the shortest railway you have ridden on?