In only 19 months, the Pony Express made a lasting impact on American history. Just the mere mention of this unique enterprise stirs images of racing ponies carrying wiry cowboys across the changing landscape. Facing pitfalls and hazards, along the way, many of these young men would etch their names in the history books. We dropped by the Pony Express Museum, in St. Joseph, Missouri, to dive into the stories behind these unlikely champions of mail delivery.

We want to thank the Pony Express Museum for hosting our visit. Rest assured all opinions are our own. The California Gold Rush and Mormon Exodus had created a need for fast, dependable mail service beyond the Rocky Mountains. By 1857, the Butterfield Overland Mail Service was traversing the 2000-miles in about 25 days. With the Civil War looming on the horizon, the need for shorter delivery times was imperative. William Russell, Alexander Majors, and William Waddell were the three prominent business owners who proposed a solution. By using a shorter route and mounted riders, they believed they could cut the deliveries to 10 days. Many thought this was impossible, but plans moved forward to create the Pony Express. 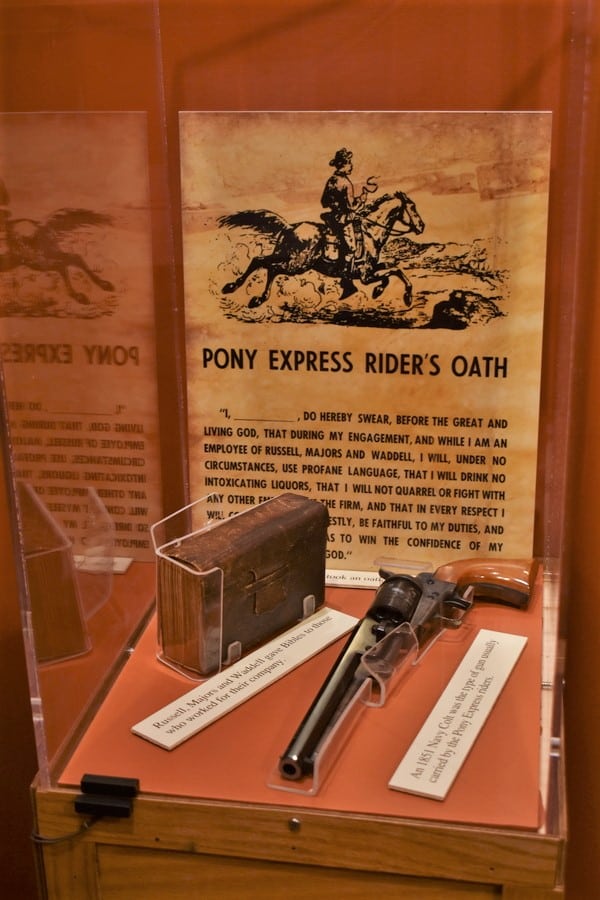 What would entice young men to risk life and limb to deliver the mail? In 1860, the average pay for unskilled labor was $15 to $30 per month. The Pony Express was offering riders a chance to earn $125 per month. With the promise of such vast rewards, the supply of willing participants was plentiful. Some strict guidelines came tied to the purse strings, and an oath was sworn by each rider. A revolver and water sack accompanied the slightly built riders, who had to maintain weight under 125 lbs. This left capacity for up to 20 lbs. of mail to be handled in every run. Riders were expected to cover 75 to 100 miles, in a cycle, with pony changes every 10 miles. St. Joseph, Missouri was the eastern terminus, for the route, so it is all fitting that the Pony Express Museum would call it home. As we explored their exhibits, we found many incorporate interactive displays. In the stables, we imagined Johnny Fry preparing to depart on the inaugural run, in 1860. We felt like kids, as we pumped water for the cattle and raced across the prairie on our imaginary ponies. Nearby, we discovered a makeshift structure that replicates one of the 190 express stations. Stepping into the station, we found it to consist of the bare essentials. The express stations came in many shapes and forms. Each station would have sat about 10 miles from the next and offered the rider a two-minute break. The Pony Express route led west out of St. Joseph on the way to Fort Kearney. On a previous trip, we had a chance to visit the Pony Express Barn Museum, in Marysville, Kansas. This is one of the last remaining original structures and gives visitors a chance to better picture their simplicity. We tried to imagine what it would have been like to be charged with maintaining a station. It must have included many hours of solitary existence. While the Pony Express riders gained all of the glory, they would have failed without the help of the station keepers. Left alone to tend the stock and keep up the station, they experienced a tough life. Often, they would be the object of attack, as they made easy targets. During the Paiute Indian War, many stations were attacked and burned to the ground. It even required the suspension of deliveries between Carson City and Salt Lake, for about a month. While every rider was key to the success of the Pony Express, it all had to start with one. There is some argument about it, but the majority of accounts credit Johnny Fry with being the first westbound rider. Born in Kentucky, Fry was an accomplished horseman. It was after a horse race that Alexander major first approached Johnny about a job. Fry accepted the position and became the first leg to launch from the stables in St. Joseph, Missouri. On the inaugural ride, Johnny carried 50 pieces of mail including a congratulatory letter from President Buchanan. As we examined the displays at the Pony Express Museum, we read the bios of various riders who traveled across the wild frontier. Some were hired for their knowledge of the territory, while others for their daring attitudes. It was interesting learning how each made their way into this business and what transpired in their lives afterward. The dangers of the route were always present, so it took steady nerves to match up to the challenge. All needed to embrace the code of the business and dedicate themselves to putting mail delivery above everything else. The days of the Pony Express were limited by the changing technology of the time. After only 19 months, the enterprise was replaced by the telegraph. Even though it was short-lived, the Pony Express has left its mark in the history books. Even today, you will hear references to this long ago business. The daring of the riders encompassed the spirit of the American pioneer. Facing unknown dangers was an everyday occurrence, but they knew that the mail must go through. It’s their resolve that has captured the heart of visitors to the Pony Express Museum. In a way, each of us can be modern-day explorers seeking out new experiences. It all starts by stepping out the door.