When Mardi Gras is mentioned, most people picture the revelry that revolves around Bourbon Street in the French Quarter section of New Orleans. To be honest, we were in that group for way too long. It would take a trip to Mobile, Alabama to help us learn the true origin of this party in the New World. Among our planned stops was a visit to the Mobile Carnival Museum. This would be the place that opened our eyes to a tradition that has surpassed the 300-year mark.

We want to thank Visit Mobile and the Mobile Carnival Museum for their hospitality. Rest assured all opinions are our own. Let’s Get This Party Started

Our visit to the Mobile Carnival Museum helped us set a few things straight. We learned that Mardi Gras is just a series of events that occurs during the celebration of Carnival. In fact, Mardi Gras is French for ‘Fat Tuesday”, which is the culmination of the celebration of carnival. Way back in 1703, the first celebration occurred in a tiny settlement named Fort Louis de la Mobile. Certainly far removed from the boisterous parties we see these days, it would grow with each passing year. Within a few years, the Boeuf Gras Society would be formed. The name is taken from the French for fat ox, and refers to the tradition of eating richly before abstaining for Lent. 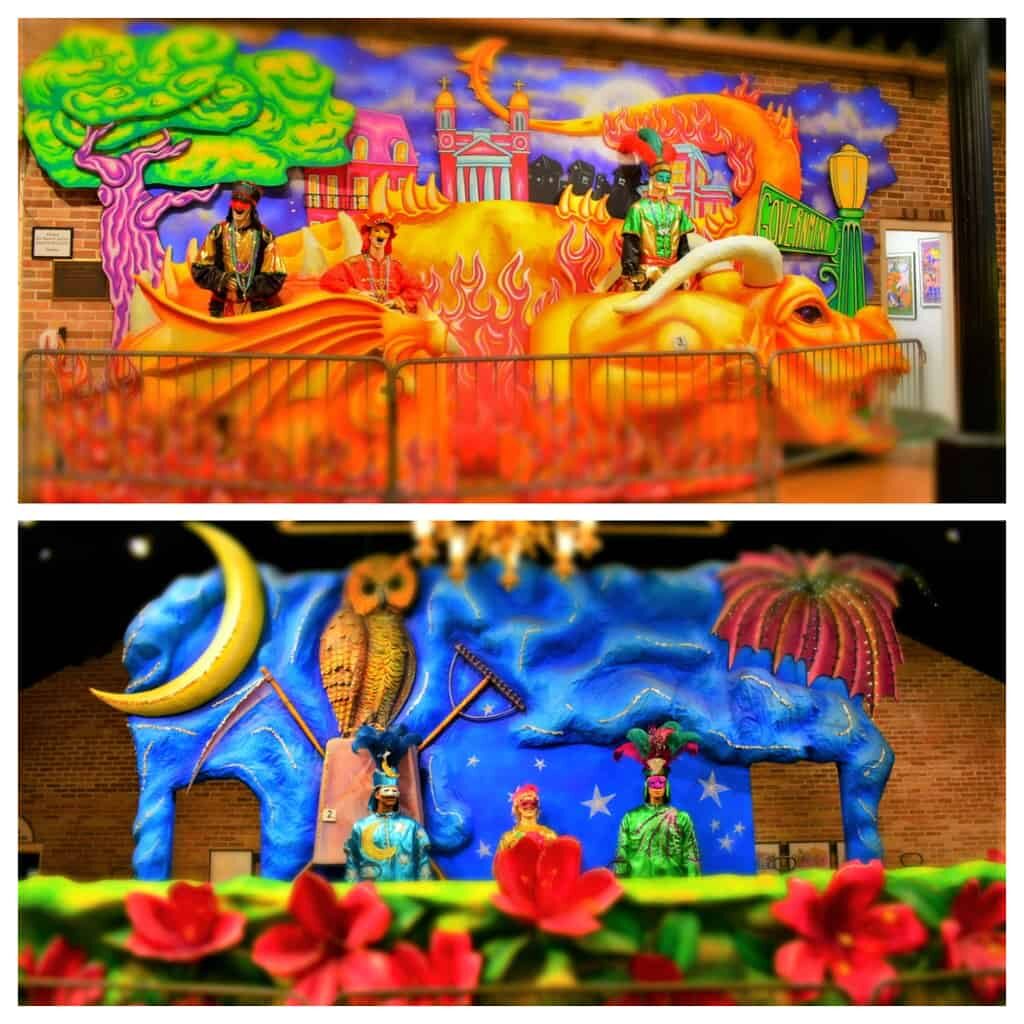 The same French-Canadian explorer who founded Mobile, Jean Baptiste Le Moyne Sieur de Bienville,  would establish New Orleans in 1718. Within a few years, Mardi Gras would come to this Louisiana city. It would take until the 1800s for the celebration to begin resembling anything we could recognize today. By then, parades had been added that incorporated flamboyant floats. Social clubs involved in creating the Mardi Gras parades were formed and named Krewes. Masked float riders began tossing out favors to the gathering crowds around 1870, as this party in the New World continued to expand. While many in the main stream only think about the parades, there is much more that goes into Carnival season. The Krewes are usually associated with a mystic society group that is dedicated to preserving their traditions. Krewe members pay dues or fees that help fund their various activities. The more elaborate their activities, the higher the fees may be. Being members of a Krewe allows for the possibility of someday reigning as king or queen  for a year. These highly sought after positions come with much responsibility. Working diligently to help prepare for their annual ball is paramount. It will be at this celebration that the king and queen are revealed to the rest of the krewe. These events are mostly private and often beyond formal. They serve as social ladder climbing opportunities, and often are the formal introduction to society life for children. The invitation-only events are just as flamboyant as the parades. While many of the krewes are names unfamiliar, the King of Carnival has long been recognized as Felix. This character was created by a group of businessmen to preside over the first daytime parade. In a nod to a visiting Russian dignitary, the colors of gold, green, and purple became the official scheme for Carnival. While not always, often one or more of these colors are incorporated into the magnificent costumes of the krewe royalty. As we explored the Mobile Carnival Museum, we found room after room filled with amazing displays of regalia. The museum opened in 2005 in one of the historic homes of Mobile. With more than a dozen galleries to view, we found plenty of unbelievable artifacts. While many of the rooms feature the intricate designs wore at the balls, there are also a large number of costumes that were used by parade participants. Each one is so intricate in design and are immediately identifiable for their theme. Can you imagine catching throws being dispensed by a group of Santa Clauses? Just as we began to see the seriousness behind many of the krewes, we happened upon an exhibit on the Comic Cowboys. It all goes back to 1884 and a local Mobile store owner named Dave Levi. Where many groups went for the razzle-dazzle, he chose to make the Comic Cowboys all about simplicity. Most often, their floats are merely plain wagons with simple decorations. Sarcastic design is their namesake and they play off of current events. The group foregoes the fancy costumes and prefer a simpler approach. It appears that many on the crowds also appreciate their tongue-in-cheek approach. As much as a king needs a queen, it seems that Carnival remained a guy’s thing for many years. The krewes were all-male, allowing women to only participate as guests. As the debutante scene began to blend with Carnival season, so the participation of women grew. Wanting their own space, all-women krewes got their jump start in 1922, when the Krewe of Iris formed. While it quickly became known for its magnificent balls, it would be 1959 before they participated in a parade. Another all-women’s group, the Krewe of Venus, organized their first parade in 1941. It was met with resistance from the men who threw rotten vegetables at the riders. Fortunately, opinions changed and these days there are female super krewes with membership in the thousands. 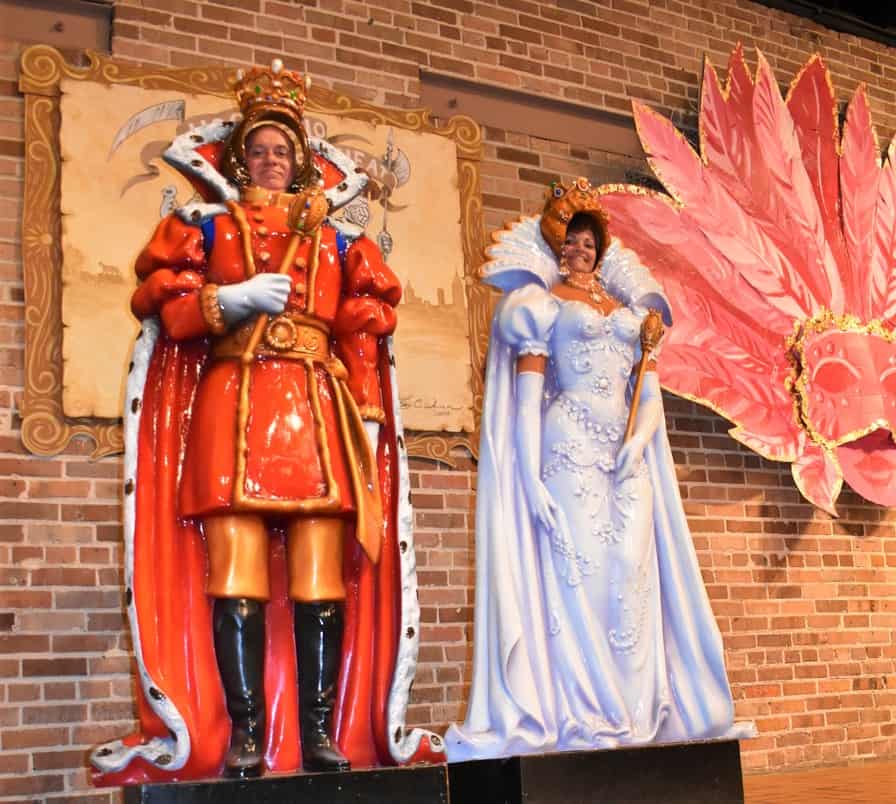 Party in the New World

While our visit was well past the end of the Carnival season, we were still able to immerse ourselves in the celebration. The Mobile Carnival Museum had opened our eyes and minds to the history of this annual celebration. Being from the Midwest, we were unfamiliar with many of the nuances and traditions. Here we were able to gather an in-depth education on how and why this party in the New World is so important to the residents and visitors to Mobile, Alabama. Now we just need to plan a visit during their Mardi Gras and get us some of those Moon Pies that they love to toss to the crowd.

Pin this for sharing!