Join Or Die – The American Revolution From New Perspectives

Join Or Die – The American Revolution From New Perspectives

The timing for our trip to Philadelphia fell just a couple months after the opening of the new Museum of the American Revolution. This brand new attraction features over thirty audio-visual experiences for visitors. I have to admit that I was over excited when I heard it would be ready in time. Revolution Was In The Hearts

The Museum of the American Revolution creates a different experience than many historical war museums. We found that they display the facts about the events, in chronological order, like you find elsewhere. They also attempt to explain the social, political, and personal atmospheres that swirled through the colonies during this tumultuous period in our country’s history. The museum begins it’s tale by noting that the colonists were content British citizens for many years. The rumblings of revolution did however begin more than a decade before the actual war. After the initial introduction, we moved into the first gallery. Here they start the explanation of life in the colonies in the early 1770’s. There are an amazing number of artifacts that compliment the multimedia presentations. We watched a short video that showed the anger the colonist found when the Stamp Act, Intolerable Acts, and Townsend Duties were placed into effect. 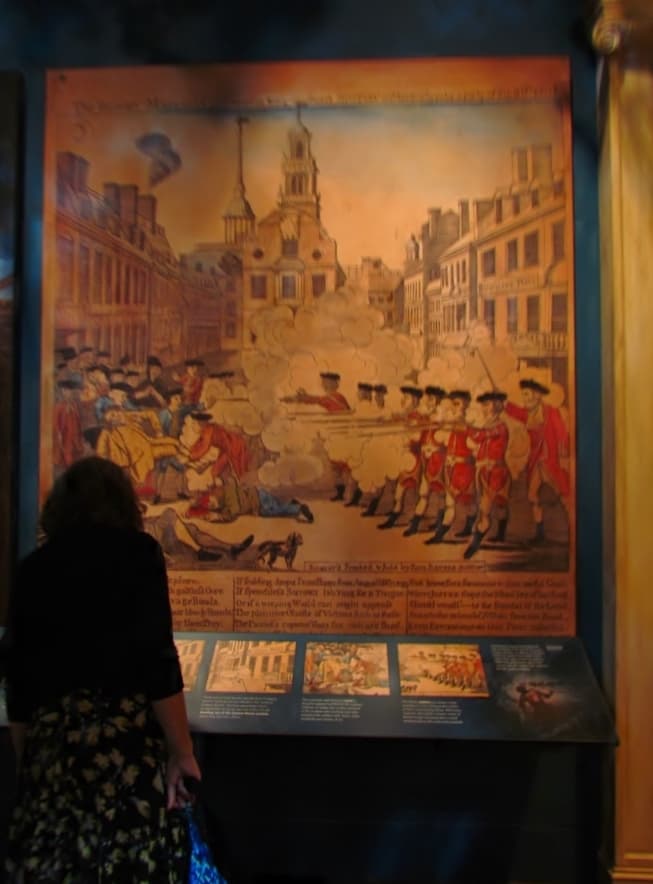 Throughout the museum there are plenty of informational panels to read to gain additional  background information. During the period right after the Boston Massacre, the use of printing and propaganda became paramount for both sides. It was interesting to see how each side put their own spin on an event in an effort to draw support for their group. I guess things haven’t changed that much in all of these years, since we see much of the same today. 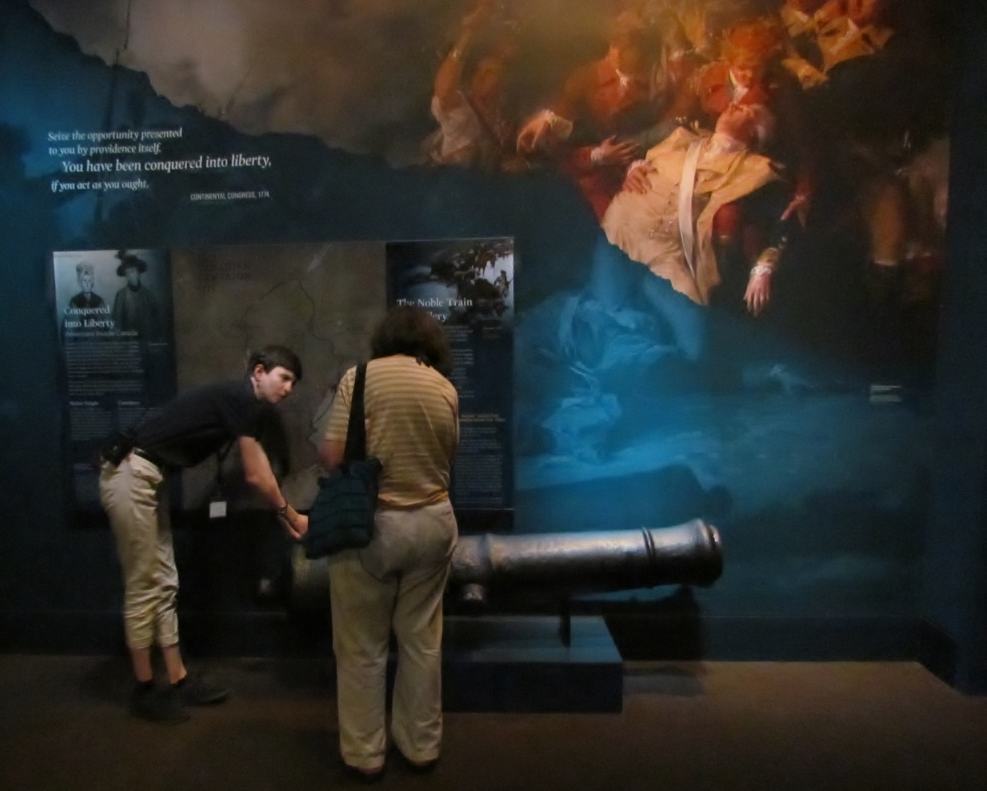 War Begins at the Museum of the American Revolution

As we moved into the section where the Revolutionary War had begun, we found an increase in the number of artifacts and statues on display. Throughout the museum we would see staff members interacting with guests to better describe the exhibits. Here a staff person shows how the cannons were loaded and fired. By 1775, the war had begun. This was also around the period that the formation of an American Army took place. The first major battle was at Bunker Hill.  Soon after, the colonies requested an end to the Intolerable Acts, in exchange for a cease fire. King George refused, and open rebellion began in July 1775. Just a year later, the Continental Congress would meet in Philadelphia to issue the Declaration of Independence. In a theater designed to replicate the look and feel of Independence Hall, we saw and heard the debate unfold. We even had the opportunity to read from authentic printings that list the twenty-seven grievances of the colonists. The boost of morale that came from the issuance of the Declaration was short-lived, after multiple defeats against well trained British troops. A floor sized map shows the entire campaign of New York by both sides. This certainly helped us to better visualize the facts we had read in other museums. An interactive map lights up the camps, advances and retreats of the American, British, and Hessian armies during the Battles of Trenton and Princeton. 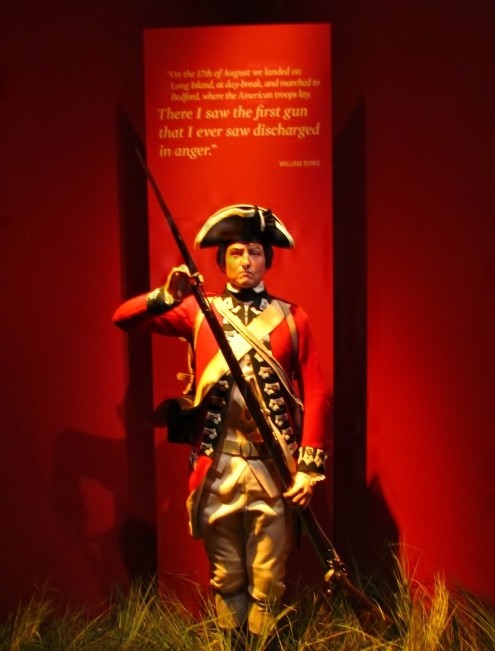 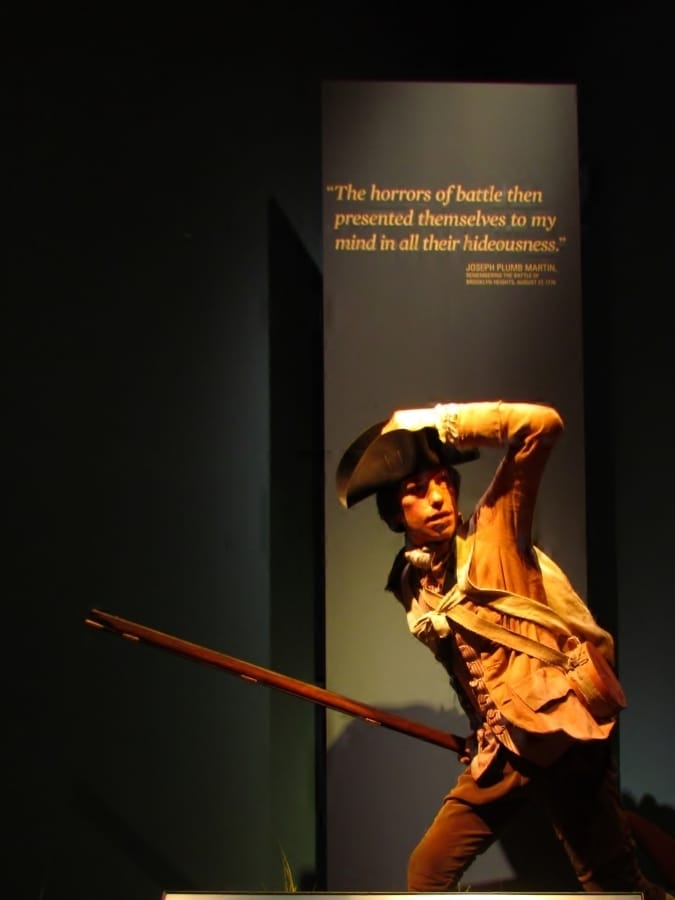 As we journeyed through the battle periods, there are statues that show the soldiers in the various armies. This is also information interspersed throughout the museum that provides personal background on the effect the war was having on those battling. These are told in the words of the actual soldiers, as well as others who lived during this period. While not surprising, it was sobering to see the horrendous effect the war had on many of the barely adult age participants. 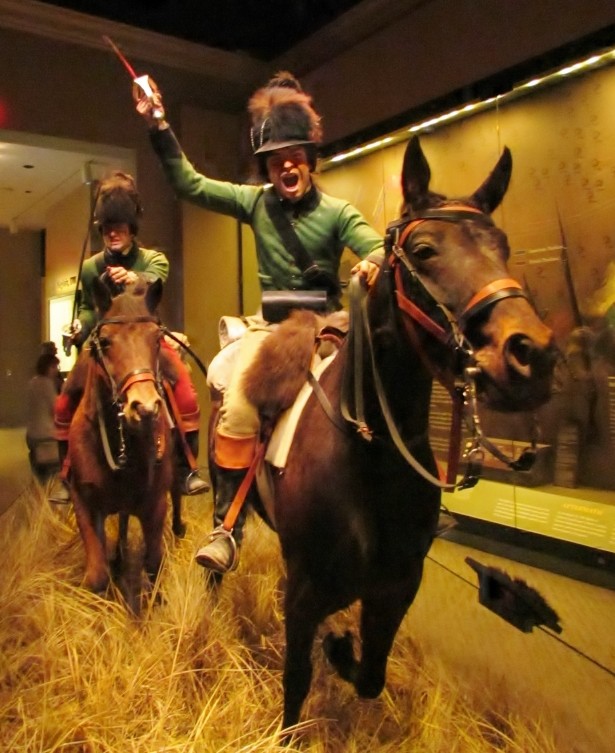 As the war drug on, it began to hint of a civil war atmosphere. Neighbors squared off on opposite sides, and often battled against each other. A particular violent group, was the Banastre Tarleton’s Loyalist Dragoons. This group of Americans, who sided with the king, had a reputation of merciless cruelty. Between 1778 and 1780, the war moved south, and the British were successful. In mid-1780, the patriot army of the south was nearly eliminated. As 1781 brought even fiercer fighting, the arrival of 6000 French troops bolstered the American Army, and turned the tide. 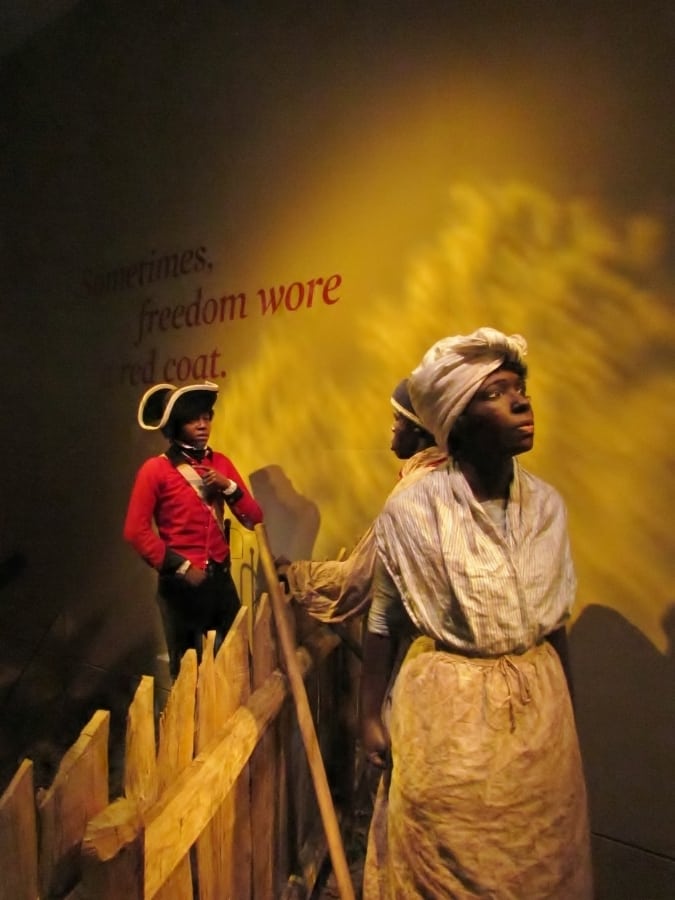 As the story of the war plays out, it is interesting to note the undertones of society during the struggle. Although Congress had declared that “all men are created equal”, there were still about 400,000 slaves in the American territory. Both sides offered promises of freedom for slaves who served in the war. The extinction of slavery was never brought to the forefront of political actions. The revolutionists seemed content to let this topic lie, since they still needed the support of the southern territories. The Native People Are Betrayed

An area that is often skipped over is the effect of the war, and it’s outcome, on the native people of the lands. Native Indians were as split as the colonists on which side to assist. Most would side with the British, in the hopes that their lands would be spared. In the end all tribes lost, as the new peace was a threat to all of their lands. 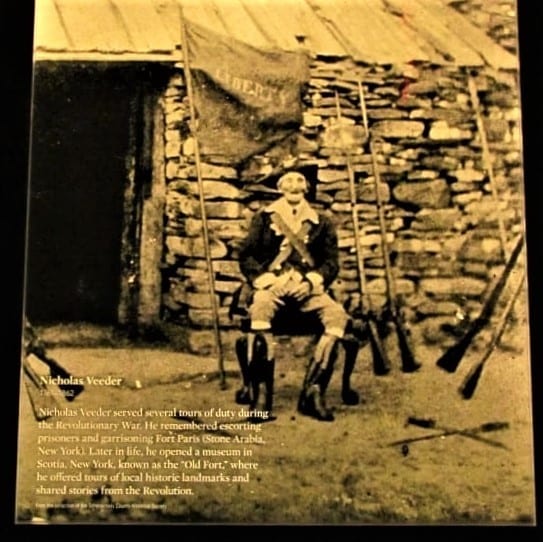 Before exiting the main gallery of the museum, there is a wall filled with photos of members who fought for the revolution. Many have a short description of the person’s participation, as well as personal background information. We were running out of time, but this particular display was quite intriguing. Perhaps on our next visit we will have more time to study it. This is certainly a museum that deserves a second visit.