Being visitors from outside of St. Louis, we found the Forest Park area to be an amazing place to spend time. The lush landscape and numerous attractions beckon visitors to explore. The four crown jewels of the park include their zoo, art museum, science center, and the Missouri History Museum, which is the focus of this article. Each of these free admission sites can easily fill a half day or more, so make sure you allocate enough time to truly enjoy your experiences. It was the 1904 World’s fair that led to the start of the Jefferson Memorial Building, which houses the museum. It opened in April, 1913 to a crowd of almost one-quarter million strong. Obviously there have been changes made to the building over time, but much of the original character has remained.

We want to thank the Missouri History Museum and Explore St. Louis for their hospitality. Rest assured that all opinions are our own.

The Missouri History Museum is broken into galleries that focus on various topics or time frames related to the region’s past. On the second floor there are a pair of galleries that cover the historical span of the last 200 years. Currents showcases the perspective from the original visitors and early settlers of St. Louis. As we viewed the exhibits, we learned about the hunters and trappers who first came to the area in search of the wildlife that was so plentiful near the river. A fur trading post was first established in the area around 1764 by French trappers. The lands stayed mainly under French control until the Louisiana Purchase in 1803.

A River Runs Through

This newly gained territory attracted a horde of settlers to the city. The Mississippi River  was the commercial highway of the time and businesses flourished due to the city becoming a jumping off point for settlers heading west. Paddle-boats plied the muddy waters and along the shoreline docks were built to handle the steady stream of supplies coming from the south and east. St. Louis incorporated in 1823, and continued to thrive as a center for commerce and trading. The two decades leading up to the Civil War saw a surge in population for the city, as many immigrants poured in from Germany and Ireland. This was in part due to the German Revolution and the Irish Potato Famine, which both caused upheaval in their homelands. By 1900, St. Louis had matured into a manufacturing center, which was well positioned and serviced by rail and river.

The City On Display

A monumental highlight for St. Louis was being chosen to host the 1904 World’s Fair. In those days, this event was not to be missed. In addition to this celebrity filled extravaganza, the city was also hosting the 1904 Olympic Games. In a seven month span, St. Louis would play host to over 20 million visitors from around the globe. The construction of lush gardens, new thoroughfares, and around 1500 buildings was a monumental task.

To this day the event is still immortalized in movies, songs, and articles. The Missouri History Museum has a collection of over 250 artifacts from the event including; furniture, carriages, trophies, and awards. It was so interesting for us to see all of these pieces of a short moment in time that touched so many lives. Be sure to read some of the stories behind the lives of the people who helped make this event a rousing success.

Flying Into The Future

Air travel has long been associated with St. Louis. We would hazard to guess that almost every child has read about Charles Lindbergh and his plane, the Spirit of St. Louis. It’s a little surreal to actually be reading information placards about its construction, as well as seeing a replica of it hanging from the ceiling of the museum.

An exhibit called Panoramas of the City contains a variety of images collected from around St. Louis during the first half of the twentieth century. These panoramic shots show a good cross section of life in the Midwest. More than 50 images are displayed in supersized detail, which allows visitors a glance into the past. We were especially excited to see a couple of panels that mention a connection to our hometown of Kansas City.

The sister gallery to Currents is located just across the way, and is named Reflections. In this exhibit hall we found that the focus moved from the founding of the city, to the personal stories that shaped it to what we know today. Music has been a large part of St. Louis’ history and is well represented in the Missouri History Museum. Famous names like Scott Joplin and Chuck Berry have local connections to the city. In this gallery we also found lots of information on the sports teams that are synonymous with the Gateway City, and offer many hours of entertainment and frustration to sports fans across the nation. Like many museums, the Missouri History Museum has a gallery that is used for rotating or traveling displays. During our visit it featured an exhibit titled #1 in Civil Rights: The African American Freedom Struggle in St. Louis. The exhibit ran for a year, but ended its run on April 15, 2018. St. Louis has often been on the forefront of the civil rights movement, and quite often grabbing attention in local and national news.

The exhibit was well organized and laid a good groundwork of information for those visiting from beyond the city limits. It was easy enough to follow along with the changes in atmosphere over the decades. The informational placards included many personal stories, which help drive their messages home with museum visitors. The day of our visit we found this gallery to be quite popular. The majority of guests were couples or small groups who slowly proceeded through the exhibit. At each display they would pause to take in the significance of the event being described. The entire set of displays was a powerful tool that helped bridge the gap from the issues of the past and show that while many advances have been made, there is still a vast amount of room to improve community relationships.

One of the most fascinating features of the exhibit was the timeline, which led us all through the years of protests and marches designed to cast a light on the inequality that a portion of our population faces every day. Here we learned the names of many who are not as well known, but served an important role in molding the changes that have occurred. The temporary exhibit also highlighted the four Supreme Court civil rights cases that originated in St. Louis. Throughout the Missouri History Museum the resounding theme was that St. Louis is a city that is ever changing. The skyline has evolved to add new structures, as the growing population push the boundaries of the city’s limits. With all of the services of any major metropolis, St. Louis has blossomed into a major destination for travelers. With service from air, rail, and a cross section of highways, many oaths across the nation pass through the city. 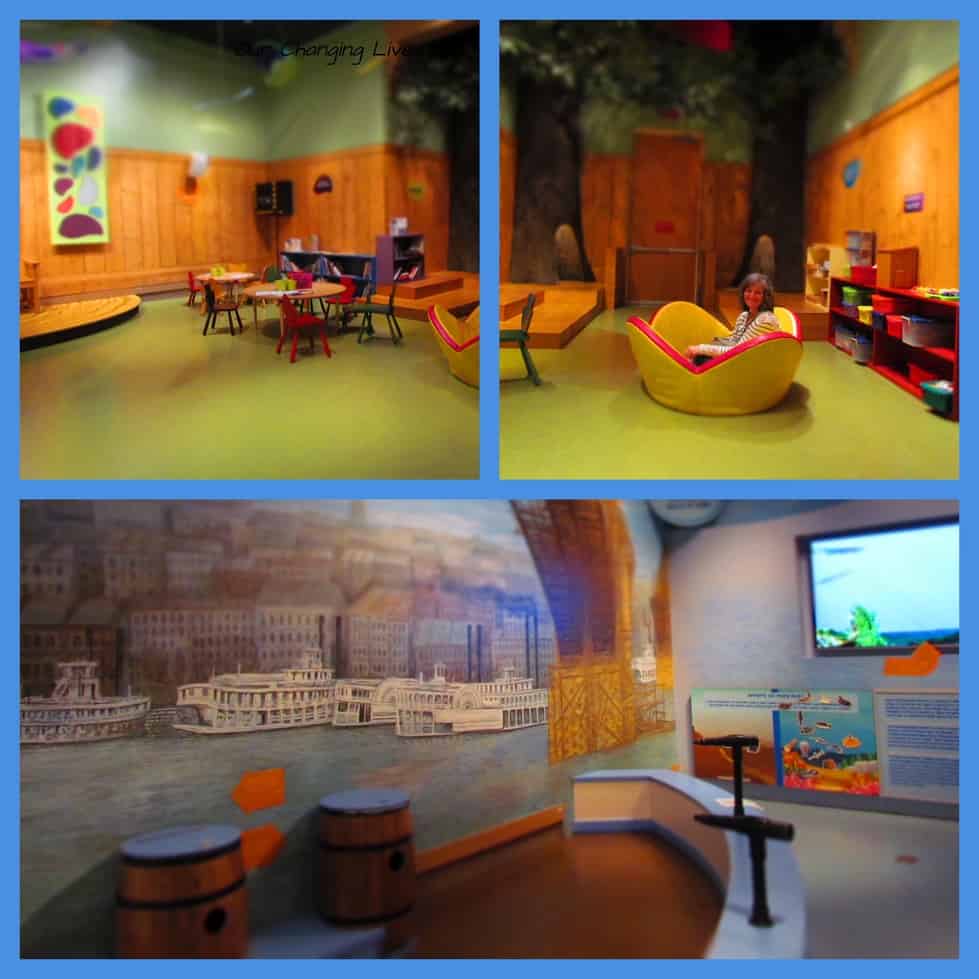 Fun For All Ages

With all of the history swirling in our heads, we almost overlooked one last gallery. The History Clubhouse is a place designed to engage the younger set, as well as their parents and grandparents. (Of course, we consider ourselves big kids!) Here you can experience much of the history of the city, but on a smaller scale. Many of the buildings are recognizable, but stand at a more manageable height. Kids can dress up in period clothes, fish from a canoe or put on a puppet show for friends and family. It’s a great place to let your imagination soar. Unfortunately for us, the time was approaching for the museum to close, so the activity of the day had subsided. We took a few minutes to do a little exploring, before making our way back to our car. With plenty of new knowledge under our belts, we were ready to explore more of the Gateway City.