It is vital that we examine our history, to let us not forget the lessons that we wish not to repeat. During our visit to Arrow Rock, we had a chance to examine a more sinister side of Missouri history. Growing up in Kansas City, we were taught about the Border War between Kansas and Missouri. The underlying issue between this escalation was slavery. By the time that Missouri was admitted into the Union as a slave state, many of the plantation ideals had already been brought into the region from the south. This included the use of slave labor to perform manual labor tasks. The Village of Arrow Rock, Missouri is fairly easy to explore on foot. With only a few square blocks, we set out to see all of the historic sites. On the northern edge of town, we came upon Arrow Rock Free Will Baptist Church, which has since been renamed Brown’s Lodge. Inside this 1869 structure, we discovered the African-American Experience Museum. It was here that we would learn about the struggles of the slaves as they transitioned to freedom after the Civil War. 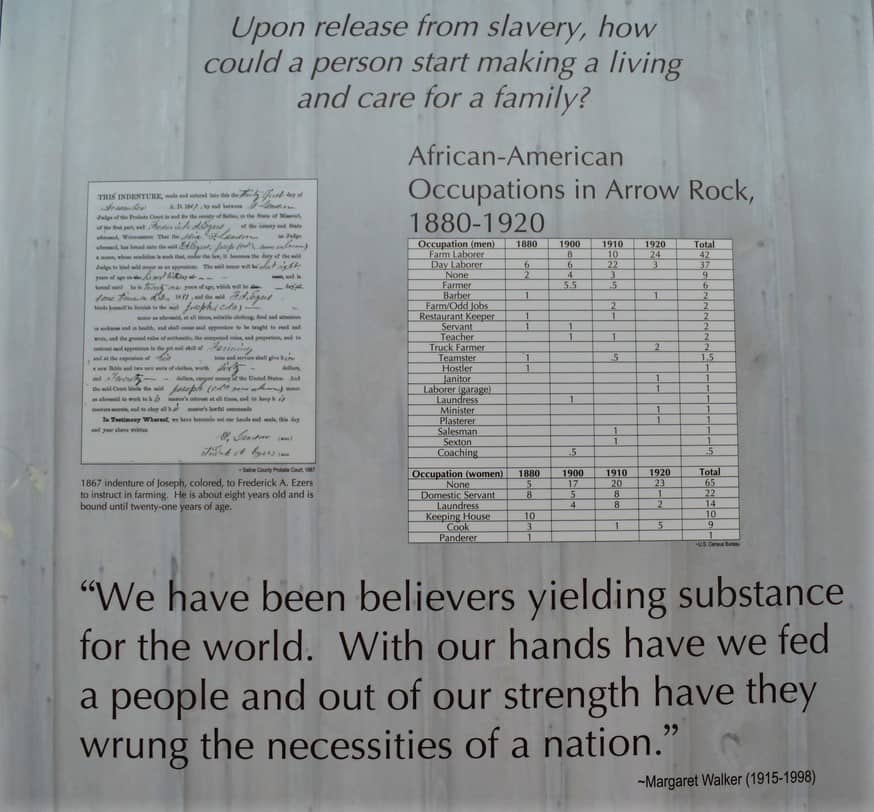 Let us not forget that much of Arrow Rock’s construction can be traced to slave labor. From the old-fashioned stone gutters along Main Street to the historic J. Huston Tavern, most of this was due to the work of African Americans. From Arrow Rock’s inception in 1829, the institution of slavery was evident all through the region. Fertile farmland was ripe for growing hemp and tobacco, both of which require strong hands and backs. By the time of the Civil War, plantations stretched all across the region’s landscape. During the Civil War, tensions rose and heinous actions occurred throughout the region. The emancipation, on January 22, 1865, did not result in equality for all. Many of those that had been slaves on the plantations chose to continue working them in exchange for room and board. Others decided to move into nearby towns to take whatever jobs they could find. Unfortunately, these were few for those who were typically uneducated. Let us not forget that these disadvantages did not stop African Americans from finding unique ways to advance. 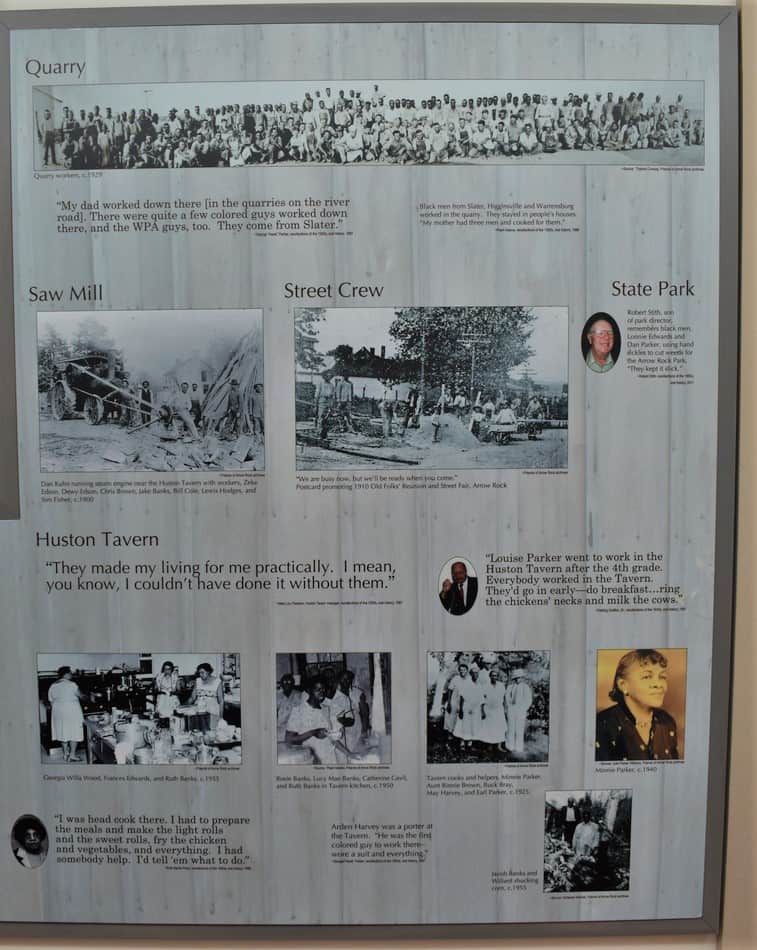 While some African Americans became business owners, most were resigned to manual labor tasks. Plenty of jobs were available in the nearby quarry and sawmill. Over time many would move from renters to homeowners. Even in this area, the disparity was evident. While there are many historic homes in Arrow Rock, few of the black citizens remain. This is mostly due to the lower quality of materials used in the construction of homes for African Americans. It was not uncommon for a black family’s home to have mismatched windows and doors, which came from using salvaged and recycled materials. 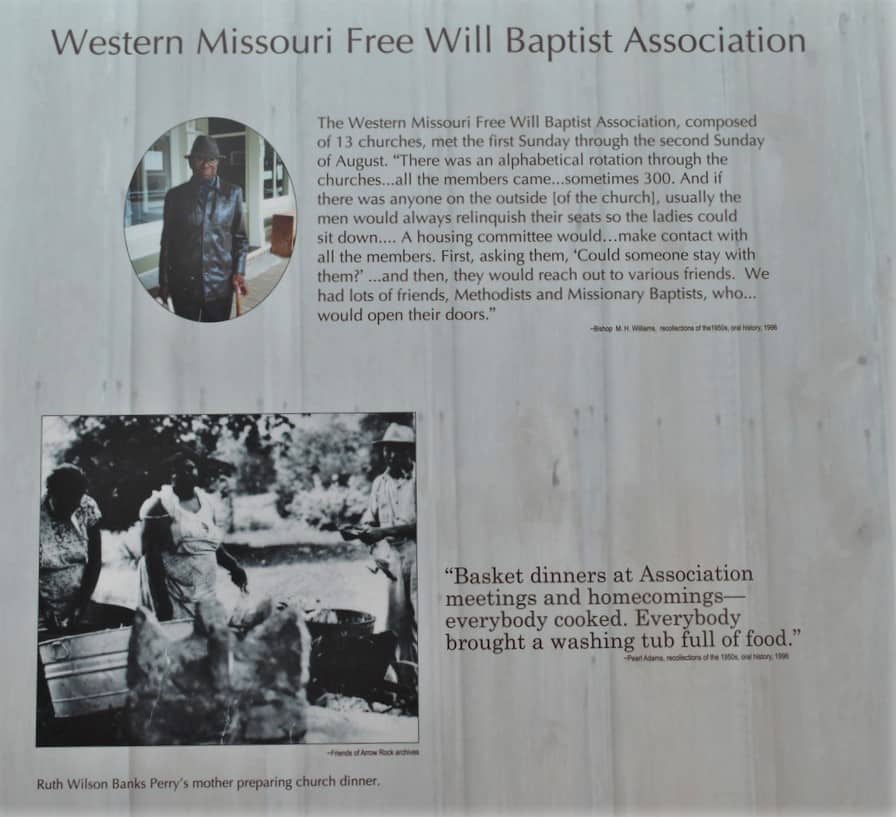 During the turn of the century, the black community remained separate and apart from Arrow Rock’s white citizens. Let us not forget that even as they built this town, they also constructed their own churches, schools, and meeting halls. The African-American Experience Museum that we were visiting happens to be inside one of these. While it began as the Arrow Rock Free Will Baptist Church, it would eventually be renamed for its first minister, John Brown.

The building has two distinct floors that each had a specific purpose. While the first floor was used as a restaurant, the second floor served as the meeting hall for Free Masons. Those in need would find solace and support, as these types of establishments served as social safety nets. While the lodge would disband in the early 1930s, the restaurant would continue to operate into the 1950s. Let Us Not Forget

The segregation, in Arrow Rock, continued even after death. About five miles south of the village is the Sappington Cemetery. Here you can find graves of some of the most prominent members of the white community. A separate cemetery was established for the African American citizens. Not far away is the Sappington Negro Cemetery, which sits on land donated by Dr. John Sappington. A stark contrast can be seen between the two sites. The Sappington Negro Cemetery is filled with less ornate stone and many unmarked graves. Let us not forget that until the 1930s, African Americans were the majority of the population in Arrow Rock, Missouri. 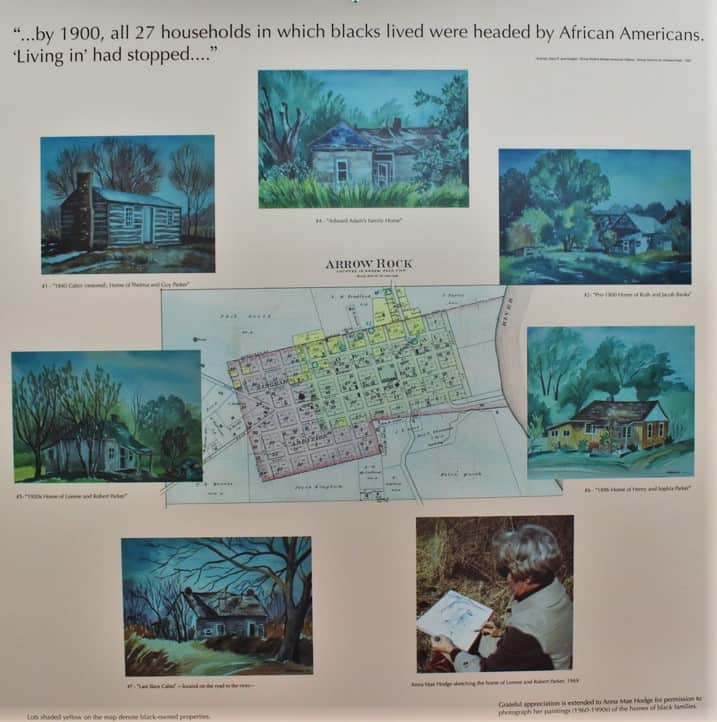 What we discovered at the African American Experience Museum is that the town of Arrow Rock owes much to its black citizens. After the Civil War, the town was in a continual decline. Let us not forget that it was the freed slaves, who moved to the area after the war, that helped keep the community alive.  While many of the tales were only recorded orally, it does not diminish the important role that they played in the village. Opportunities to learn from sites like this are one of the things we relish about traveling. For us, it is a form of continued education.