The Mid-America All-Indian Center, in Wichita, is the only facility solely dedicated to the culture of the American Indians, located in the state of Kansas. Situated on the point of land that overlooks the Arkansas River, a visit to this unique museum was a chance to explore the cultural history of the people who first inhabited the lands of North America.

We want to thank the Mid-America All-Indian Center for their hospitality. Rest assured that all opinions are our own. 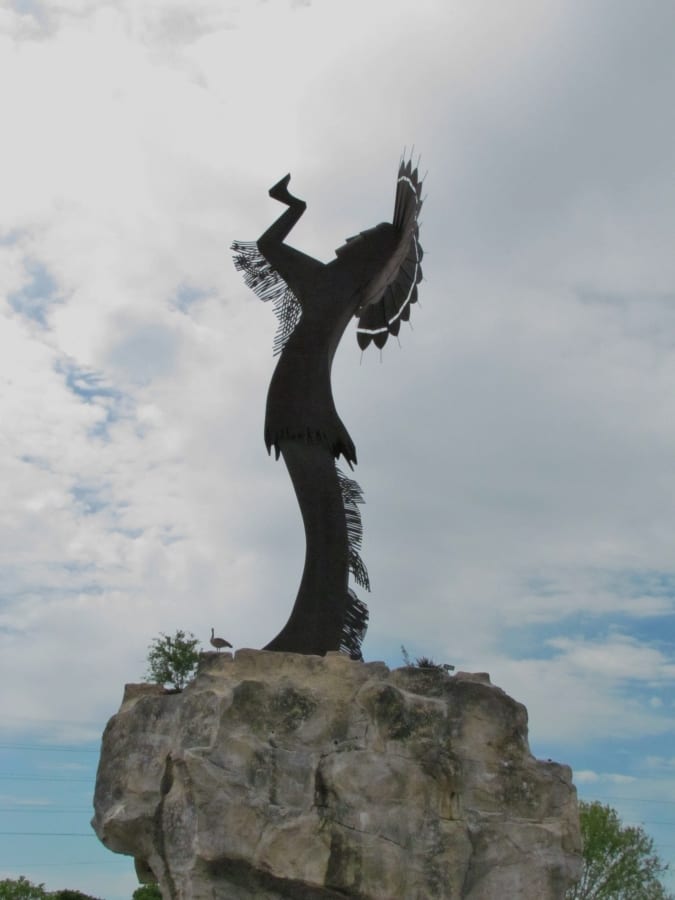 Our first experience with this area of Wichita, occurred with the nightly “Ring of Fire” that is held at the Keeper of the Plains statue. This 44 foot tall steel sculpture was created by Blackbear Bosin, a Kiowa-Comanche artist. The 10,000 lb. sculpture cuts an impressive figure in the landscape of the city. A pair of suspension foot bridges allow visitors access to the area. It was by chance that we found out about this event, and barely made it there on our one available evening. We were scrambling so much, that I didn’t have time to grab the camera. Fortunately, we had a follow-up visit planned to tour the museum and grounds. During our longer visit, we had time to examine the displays located behind the base of the sculpture. These are filled with information about the local tribes who used to inhabit the area. The ability for the city to connect with the American Indians is crucial, as there are more than 10,000 natives, representing 72 unique tribes, residing in Wichita. The area surrounding the sculpture has an inviting feeling to it. Joggers traverse the bridges on their daily workouts. Locals stroll through on their way from one side East to West or visa-versa. Many people linger to read the historical plaques or just to take in the calmness of the site. 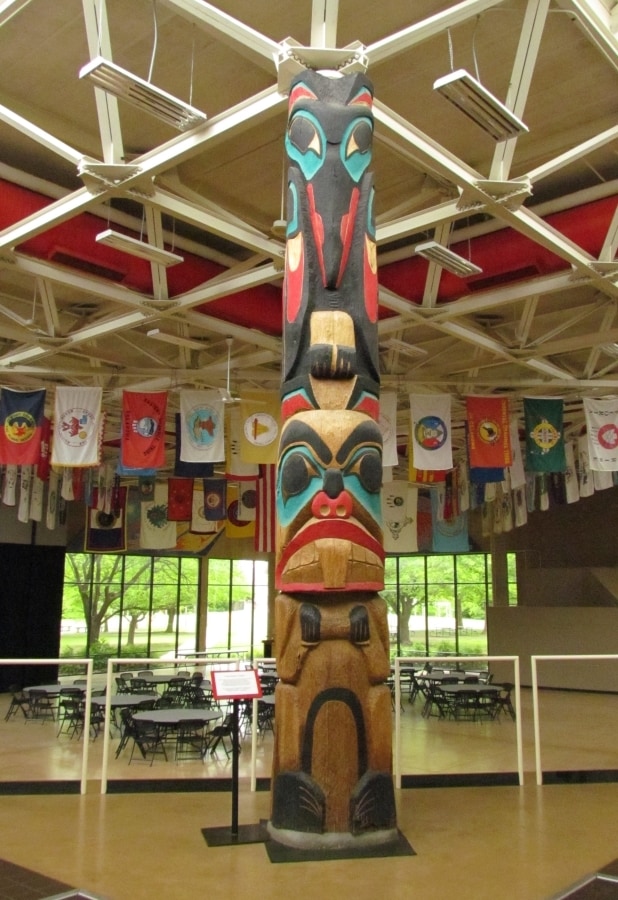 The time for our visit to the museum drew nigh, so we made our way to the entrance. The staff was very welcoming, and gave us a brief overview of the exhibits we would find inside. Before entering the main exhibit area, we stepped out into the Gallery of Nations. This is a multi-use area, that can be reserved for individual events. the ceiling is lined with the flags of many of the American Indian tribes. It is an impressive collection, and begs visitors to explore. We made our way into the main gallery area, and began exploring. This museum has a wide variety of displays, with many being interactive. Here visitors can learn about the history of the American Indians, and some of their traditions and beliefs. Exhibits show the importance of the animals that inhabited the lands, and the connection they held with the people of the region. 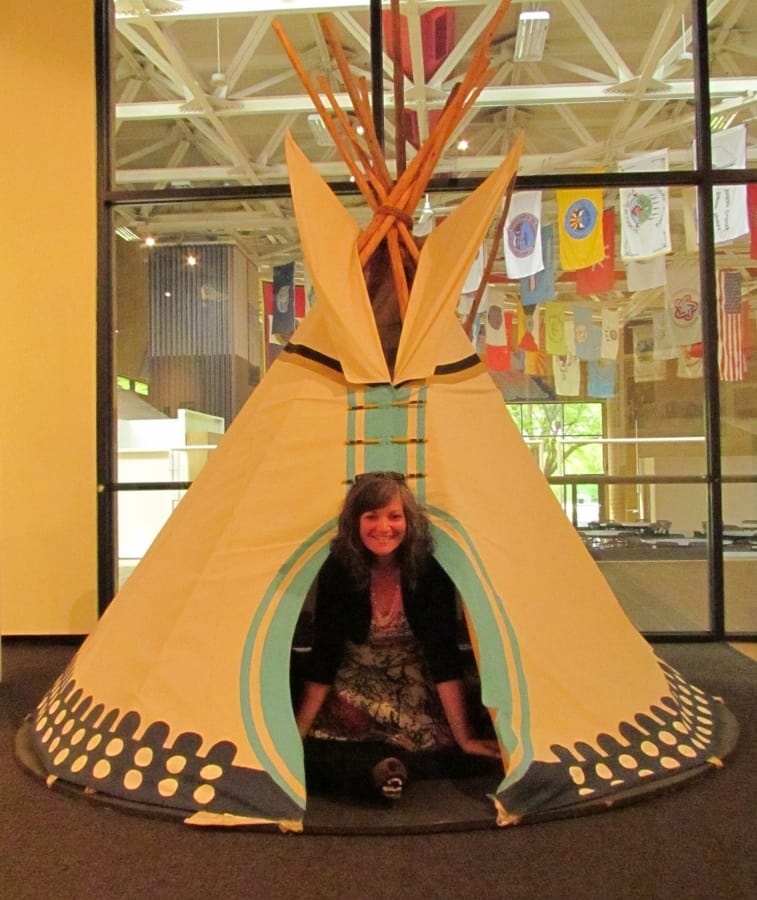 There are a variety of displays designed to engage visitors of all ages, and Crystal was more than willing to showcase one of them. We had arrived at the opening of the day, so for a short time we had the run of the place. Soon we were joined by a large group of American Indians who had traveled from Utah to visit the area. They were in town to perform at a nearby event, but had carved out some time to visit the museum. 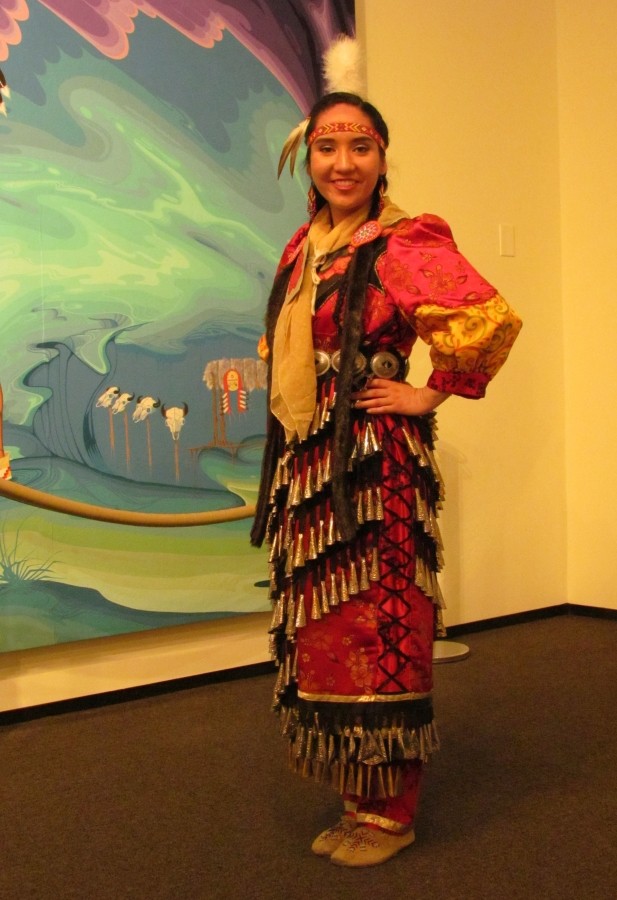 One of the ladies in attendance was from the Navajo tribe. She was kind enough to pose for a picture, while wearing a traditional Ojibwa “Jingle” dress. This particular dress is used for a dance of healing. Multiple rows of metal cones would ring as she moved about the museum gallery. It made a wonderful sight, and sound, but I would imagine it may be difficult to sit down. It was unfortunate that we didn’t have time to go watch the performance. 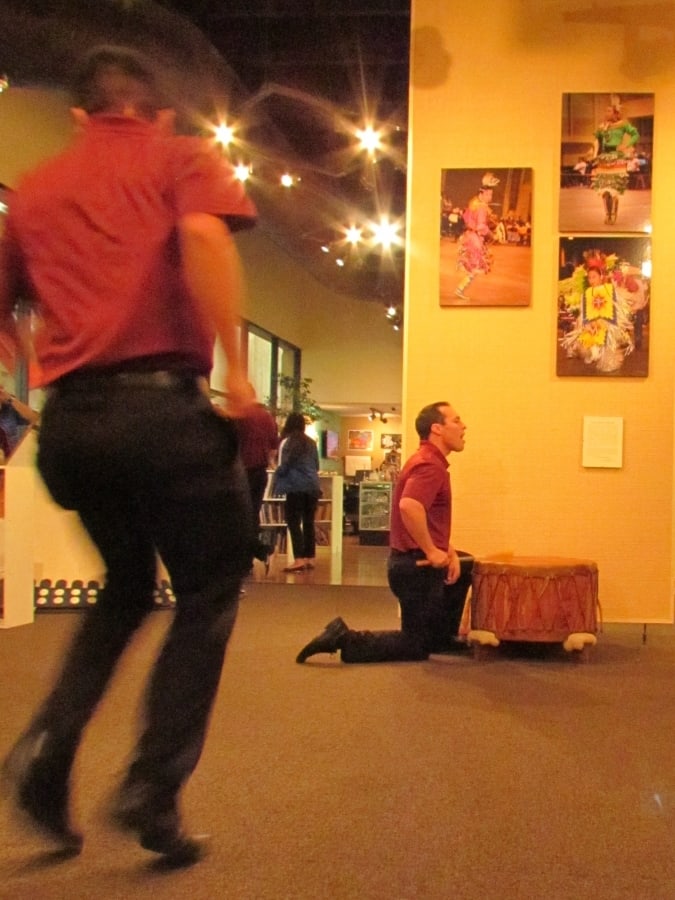 I made my way back to find Crystal, and discovered her watching some of the other visitors. A group of young men were discussing a ceremonial drum that was on display. This is another of the interactive exhibits, and it was obvious they were familiar with it. Soon one of the men began playing the drum, while singing a delightful native sing. Some of the others showed us some of the dance steps that they had perfected. We discovered that this group of young men were also slated to perform later that day at the off-site location. We felt honored that we were able to witness a little of the show in a private setting. Soon our new found friends had to head to their prior commitment. We thanked them for the entertainment, and bid them safe travels. Now we had moved to the section of the museum dedicated to the artist, Blackbear Bosin. Born and raised in Oklahoma, he moved to Wichita after high school. After serving with the Marine Corp in World War II, Blackbear returned to Wichita. This self-taught artist had a style that was unique, and combined surrealism with Native Indian mysticism. One section of the museum showcases his life with pictures, artifacts, and a video. Over time his portfolio of work expanded to include abstract pieces. His most famous piece is the keeper of the Plains sculpture, which he donated to the city of Wichita to commemorate the American Bicentennial. To this day, his work is still highly prized for his creative use of vivid watercolors and acrylics. A visit to the Mid-America All-Indian Center, in Wichita, will give you an opportunity to see more of his work. It is also a great place to gain a better understanding of the peoples who lived with the land long before it was discovered by Europeans.