Exploring a new city takes on a new perspective once the sun sets. The older the destination, the more spirits that roam the city streets filling the darkness with their presence. Their stories can be heard in the creaking staircases and banging doors. While we had learned loads of history, at attractions like Immersion Quebec, we were eager to hear from the city’s early residents. To get this perspective, we decided to join in on a walking tour with Le Promenades Fantômes. This unusual tour group offers guests a chance to explore history in the shadows.

We want to thank Quebec City Tourism and Le Promenades Fantômes for hosting our tour. Rest assured all opinions are our own. Like many metropolitan cities, Quebec City has a vibrant nightlife. Throughout the various historic districts, people gather to explore the shops. Diners enjoy their evening meals while watching the passing crowds. This activity is repeated in nearly every destination we have visited. As the hours pass, we notice the crowds begin to thin. Shopkeepers wrap up their final sales, as shoppers make their way back to their homes or hotels. The mood of the city slowly transforms into solemn watching. This is the perfect setting for an outing, much like the ghost walk, we had taken in Springfield, Illinois. As the witching hour approached, it was time for us to make our way to our rendezvous point. Walking along Rue Dauphine, we came to the public library. Here we saw some ominous artwork laid out before the growing darkness. Quebec City is filled with amazing art, which makes traveling by foot all the more eventful. When you are visiting this city, be sure to keep your eyes peeled for these sometimes hidden wonders. The intricate architecture of the buildings that towered over us added some extra spookiness to our evening. Just across the street, we found the Morrin Centre. Our invitation to the Le Promenades Fantômes had directed us to gather in front of this historic building. Soon we saw two ghostly figures appear from the shadows. The manly figure remained just outside of the streetlights, while the woman approached our group. She welcomed us to the evening’s gathering and told us her name was Marie Rivière. I say was, since she is only the spirit of her corporeal body. Our ghostly tour began with a short overview of the building in front of us.

One must travel back to the days of New France, which is what the region was once named. At that time, this parcel held the Royal Redoubt, which was used as military barracks and to house prisoners. In 1808, the construction of a public prison began on this site. Public hangings were performed, by the city’s executioner, in the courtyard where we stood. Marie informed us that she had been the wife of Jean Rattier, who served as the fourth official executioner. It sounded like a prestigious position, but we would find out it was not what one expects.

As our tour continued, we followed Marie to a variety of locations throughout the Old City. At each stopping point, she would share stories from the early days of Quebec City. I watched from a short distance and noticed that our hostess would always tell the stories of the city’s history in the shadows. By hanging just outside of the direct light, it added an eeriness to our evening entertainment. Between historical references, she doled out bits and pieces of information about the life of an executioner in the early days of the city.

The locals were afraid of the executioner, so he and his family were forced to reside outside of the city limits. Marie’s husband had at one time been sentenced to death, but the untimely passing of the previous executioner created a job opening. Jean Rattier was offered the choice between waiting for a new executioner to be hired or taking on the role himself. We are sure that must have been an easy choice when your death is on the line. After making our way through the upper section of Old Quebec City, we followed our ghostly hostess down to Lower Town. As we approached Place Royale, our gaze fell upon the Fresco of Quebecers. This immense mural features dozens of notable characters from Quebec history. Set within the background of the city’s architecture, we noticed it blended current and historical figures. Front and center are Samuel de Champlain with Louis Jolliet standing on the staircase to his left. They were instrumental in mapping out the northeastern portion of North America. 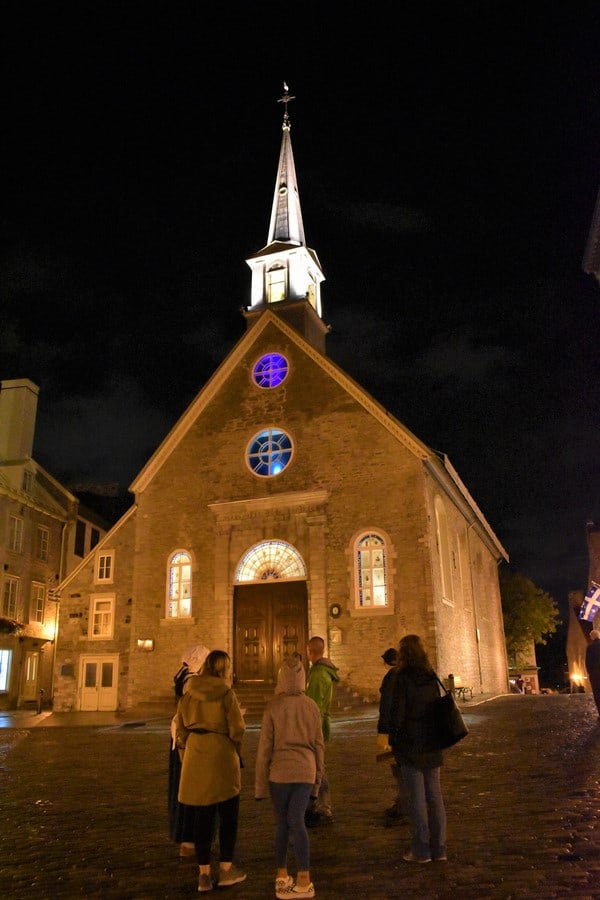 As our Le Promenades Fantômes tour approached its end, we arrived at Place Royale. This town square has cobblestone streets lined with shops and restaurants. Many of the buildings date from the 1700s. Sitting in the center of the square is Notre Dame des Victoires, which was constructed in 1688. This makes it the oldest stone church in North America. You may even recognize it from a scene in the movie “Catch Me If You Can”. As we gathered around our guide, we found ourselves standing in the area where Samuel de Champlain founded Quebec City in 1608. We wondered how many of the buildings around us had their own macabre tales hidden within their walls. We learned in Eureka Springs, Arkansas that beautiful structures, like the Crescent Hotel, can hold startling stories. History in the Shadows

Marie completed her narration by telling us a little more about her husband’s executioner job. During those trying times, Jean Rattier would have to make many difficult decisions. He would even find himself putting his wife to death for crimes she committed. This was an unexpected ending to the storyline, but one that certainly piqued our interest. Her final story unfolded the details of her crimes and how they led to such brutal punishment. This was truly an amazing ending to a wonderful evening of stories. We thanked our hostess and watched as our group dispersed into the night.

After finishing our ghostly tour, we spent a short period sightseeing in the quiet darkness. Visiting Quebec City in the fall means that the night falls quickly. Being one of the safest cities in North America, nighttime is prime for exploring history in the shadows. While still in Lower Town, we had spotted this building sporting another huge mural. It is located in Petit Champlain, a neighborhood that claims to be the oldest commercial business district in North America. The images depict historical moments in this working-class neighborhood. Still of the Night

We continued along the pedestrian avenue, eventually arriving at the Breakneck Steps. Constructed in 1635, it provides a shortcut for visitors heading to Upper Town. By now, the shops were closed and the pedestrian traffic had fallen to barely anyone. We climbed the steep stairs, as we made our way back toward our hotel. There is a different feeling when viewing a destination at night. Seeing the city lights spread out around us reminded us that we were far from home. It helps remind us how special it is to have an opportunity to travel all around North America. Do you take in the city sights during the still hours of the night?