While the interstate highways work well for transporting people in the quickest fashion, they leave a lot to be desired for sight-seeing. For decades, we have made the journey to Minnesota to visit Crystal’s relatives. Most of the time, we just want a quick route, but when time allows we venture off the beaten path. A good alternative, from our home in Kansas City, is US Highway 169, which runs from Oklahoma northward. As it stagger-steps its way through Iowa, it brings us surprisingly close to the town of West Bend. It is there that we discovered the Grotto of the Redemption, which is one of Iowa’s precious gems. The old saying that into everyone’s life a little rain must fall was certainly true the day we visited. In fact, they were having a real gully washer. Pulling into West Bend, we made our way to the site of the largest man-made Grotto in the world. We were not to be dismayed from checking it out, so we grabbed umbrellas and ventured out. The overcast skies brightened the colors of the landscape, which was in late summer bloom. Being inclement weather, we were the only visitors at the time. While we had made short stops in the past, this visit we would dedicate to learning more about this unique attraction. 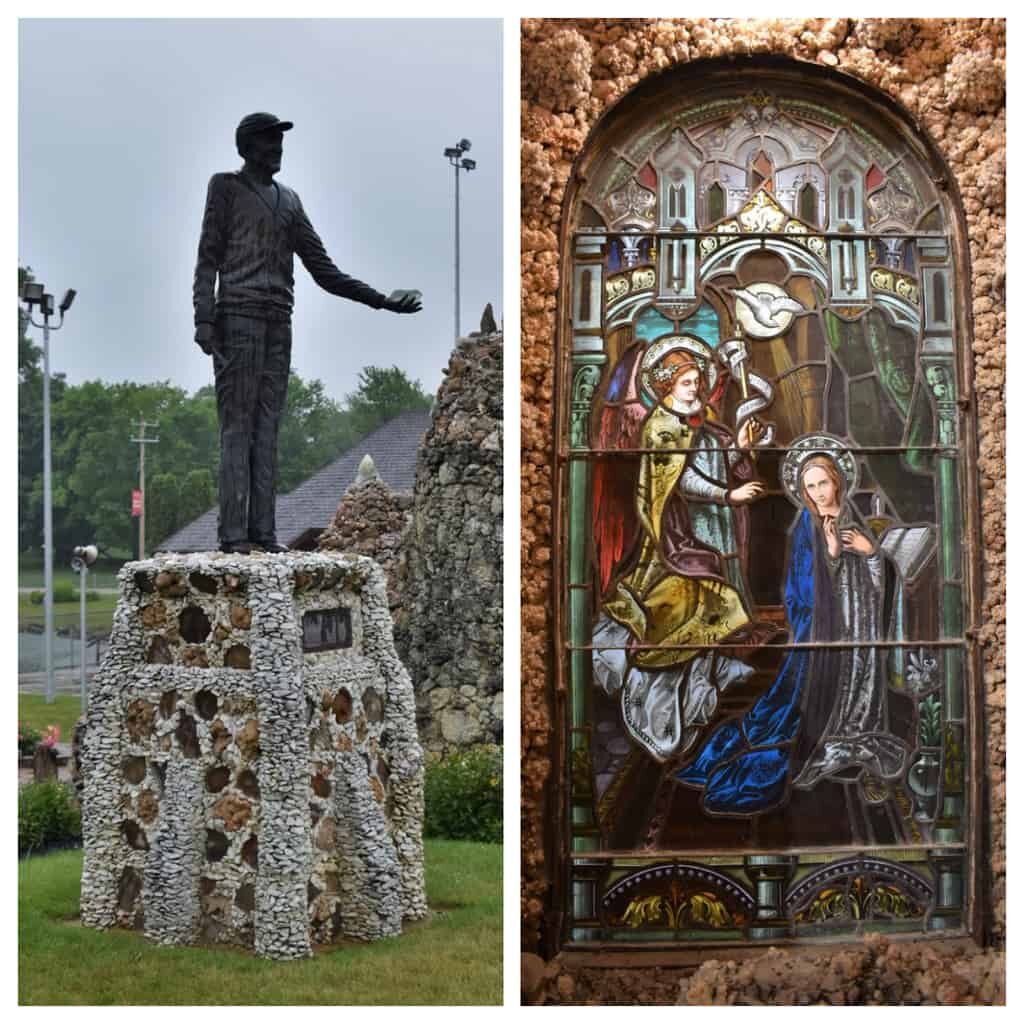 The backstory begins with a young man working his way through seminary school. His name was Father Paul Matthias Dobberstein and he was born in Rosenfeld, Germany. At the age of 20, he immigrated to the United States and landed near Milwaukee. During his studies, he came down with a severe case of pneumonia. As he lay on his deathbed, he prayed to the Blessed Virgin Mary for a return of his health. In return for this, he would build a shrine in her honor. His illness would pass and after completing his studies, he eventually landed in the middle of northern Iowa. It was here that he began stocking up on rocks of all types for the construction. Traveling through Iowa, one would not expect to find a structure constructed from gems and minerals throughout the world. The rain began pouring harder, so we found ourselves seeking refuge in the various caverns that are part of the Grotto of the Redemption. Here we could get a better look at some of the details involved in the construction. Some of the materials are easily recognized, like the crystallized interiors of geodes. A good variety of quartz was used, but then we spotted some lesser known types of mineral. Barite Rose from Oklahoma is visible in a rainbow of shades and so is fluorite. We even spotted pieces of petrified wood that are incorporated in the designs. When we first arrived, we had sought shelter in the brick building that serves as a welcome center and museum. While we waited for the first round of heavy rain to let up, we examined the historical exhibits. The Grotto of the Redemption has been around for a long time, so it’s no surprise to see artifacts from different decades. There were a few pieces that we wouldn’t have expected to find. In the center of the room is a long case that holds samples of the various materials used to build the structure. While a portion of the stones were purchased, many were donated by visitors who wished to help see the wonder become a reality. Grotto of the Redemption Complex

While Father Dobberstein had the vision, a second person would assist in building the Grotto of the Redemption. The humble priest began construction in 1912, after a decade of stockpiling materials. With the aid of a young parishioner, named Matt Szerensce, they set to work constructing the structure over the next 47 years. Nearly one-hundred carloads of stones and minerals went into the project. It would become the largest collection of precious gems and stones in one location. Climbing to the top, by way of one of the staircases, we gained a better perspective of the grand scale of this project. With the rain slowing to a mist, we could spend some time exploring the complex. It is a little overwhelming to attempt seeing it all in one visit. The hues and shades of the stones create intricate patterns. In some places we discovered repeating patterns, but much of the construction seems to be a little more random. A variety of marble statues adorn various nooks and crannies. There are others that are set high to be easily visible from multiple angles. We even found some stained glass inserts that are incorporated into the architecture. Break From the Road

Before we left the Grotto of the Redemption, we made a stop in the gift shop. Here we could pick from a variety of religious items, as well as souvenirs that commemorated our visit. The rain was rolling back in, so we decided it was time to get back out on the road. We still had many miles to travel and we hoped to see some more unique attractions that are found off of the beaten path.

Pin the Grotto of the Redemption!