Glore Psychiatric Museum – Facing The Past

Glore Psychiatric Museum – Facing The Past

There are some subjects that people tend to shy away from during conversation. Mental illness is one that can leave people feeling uncomfortable. During one of our outings, we stopped by the St. Joseph Museum Complex to learn more about the history of treating mental disorders. What we discovered inside reminded us that those struggling with unbalanced minds were often treated harshly. The Glore Psychiatric Museum is housed in part of the actual hospital and it feels like it as we wandered through the exhibits. It is the biggest of the six museums that are housed in the complex. Join us on this walk through one of America’s most unusual museums.

We want to thank St. Joseph Museum Complex for hosting our visit. Rest assured all opinions are our own. Throughout human history, mental illness has been with us. During the Middle Ages, society was dealing with a variety of health issues. With outbreaks of smallpox, bubonic plague, and leprosy wiping out large numbers of the population, the early forms of health care were fighting a losing battle. Mental illness was considered an imbalance issue, which needed the assistance of physicians to correct. At the same time, the church believed the conditions to stem from demon possession or sorcery. Women with mental conditions were often mistaken as consorting with witches and dealt with by various forms of physical abuse or torture. As time moved forward, treatment for mental illness was slow to advance. 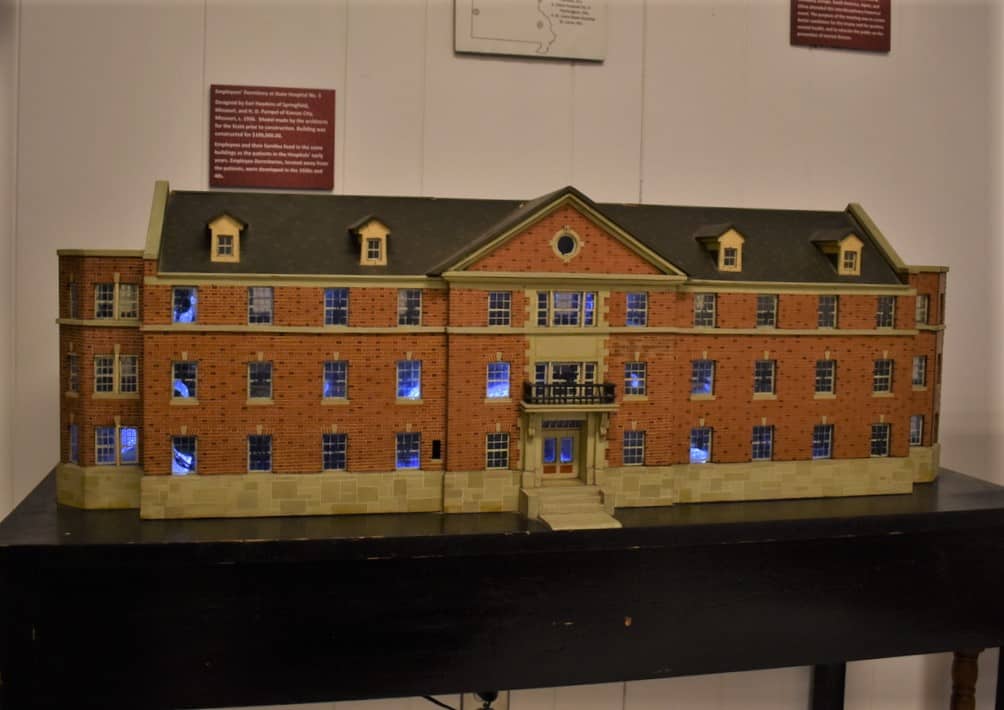 By the 19th century, treatments had moved to the use of social isolation. Hospitals, often referred to as insane asylums, had become commonplace. In 1874, Missouri opened the State Hospital for the Insane No. 2 in St. Joseph, which was often just called Lunatic Asylum #2. Starting with 25 patients, it didn’t take long to fill its 275 bed capacity. Over the years, more and more beds were added until by the 1950s it was serving 3000 patients. In the earlier days, the hospital was designed to be self-sufficient. The nearby farmland provided food for the facility. Many of the patients worked the fields and assisted with caring for livestock. The staff needed only procure sugar and salt to supplement the food grown on-site. As the number of beds increased, the ability to remain self-sustaining became more difficult. In 1899, the name was changed to the St. Joseph State Hospital and the number of criminally insane were expanded. As the population of the hospital expanded, so did the main form of treatment. By the 1920s, a new phrase was introduced into the world of mental illness treatment. Psychopharmacology involved the usage of drug therapy to assist in controlling patients. Many of the drugs were designed to put patients into a nearly catatonic state. These new medications were effective in reducing aggressive or harmful behavior, so it was well received at a facility designed to house the criminally insane. Moving forward in time, health care continued to experiment on ways to cure and control mental illness. Many of the treatments are now considered barbaric, but at the time were cutting edge experimentation. Patients experiencing manic episodes were subjected to hydrotherapy. They would be submerged in cold water for hours. Mechanical constraints were commonplace, as doctors felt they helped keep patients safe. As the population inside of the asylum grew, these restraints became a way to control overcrowding. The next fad to surface was electroconvulsive shock therapy. The use of electricity to change mental activity became popular in the late 1930s. By the late 1940s, another treatment would surface, which offered permanent changes for the patient. Lobotomies involved damaging specific portions of the brain in an effort to prohibit the connections that were causing the maladies. While these surgeries did help calm many of the patients, it would bring changes beyond the bad behaviors. Permanent memory loss and personality changes were commonplace. The next major change in mental health care would involve medications. For many decades, morphine and opium had been prescribed to calm patients. The side effects of these treatments proved the need for better medications. In the 1950s, Thorazine hit the market. Psychiatrists saw it as the miracle drug that they had been waiting years to see. Along with a variety of other antipsychotic drugs, this was a turning point for mental health care. When these drugs were introduced, there were more than 500,000 patients in asylums across America. By the mid-1990s, this number would drop to around 70,000. The treatment of mental illness has come a long way since the Middle Ages. In 1967, an employee of the hospital, named George Glore, opened a small museum in one of the wards. By the time he retired, in the 1990s, the museum had expanded its exhibits to cover the long history of mental illness treatment. By this point, most of the patients had returned to society. Without a need for the asylum, a large portion of the facility was converted into a correctional facility. With three floors of exhibits, the Glore Psychiatric Museum offers a glimpse at the difficult history of treating mental illness. One of the key take-aways we got from our visit is that only by facing the past can we learn to do better in the future.

Pin the Glore Psychiatric Museum for a future visit!