Friendship and food just seem to go together. Whenever we work with a tourism bureau, we try to share a meal with our hosts at least once. During our first visit to Canada, we met up with Paule Bergeron from Quebec Cite Tourism. She had assisted us during our planning phase and suggested meeting up for dinner at Ristorante Il Matto. This is an upscale eatery that serves home-cooked Italian cuisine. Housed in a 19th-century bank building, the restaurant can be found inside Hotel 71.

We want to thank Quebec City Tourism and Ristorante Il Matto for hosting our visit. Rest assured all opinions are our own.

Getting Started at Ristorante Il Matto

After trading pleasantries with Paule, we were seated by the staff. The evening’s meal would be a three-course event that would allow us to showcase a variety of the restaurant’s dishes. We kicked it off with appetizers. I chose the Fried Calamari, which was some of the best I have ever sampled. The tasty rings were delightful on their own and made even better with their dipping sauces. Crystal confirmed my prediction by ordering the Cesar Salad. Paule chose the Soup du jour, and we all nibbled on the freshly toasted bread.

Our entree choices reflected the variety of homemade Italian dishes at Ristorante Il Matto. Each plate brought unique flavors and family traditions to our table. The ravioli was a family recipe that is hand-made by the restaurant owner’s mother fresh daily. Crystal noted that these were the best that she had tasted and the cream sauce was perfectly seasoned. Paule was relishing in her plate of Penne Arrabiata which added delicate texture to accompany the Escalope de veau (veal cutlets with mushroom cream sauce). While I didn’t taste their dishes, I can confirm that they both raved about the flavors.

My choice was Pappadelles aux champignons sauvages, which loosely translates to Pappardelle pasta with wild mushrooms. I knew Crystal was not about to test my dish, since she is no fan of mushrooms. That was unfortunate for her. There is an island that sits in the middle of the St. Lawrence River near Quebec City. There they grow a large portion of the produce that is used in many of the restaurants in the city. I’m not sure what is in the soil but these were some of the best-tasting mushrooms that I have ever consumed. During our evening meal, we found ourselves being waited on by multiple servers. This seemed to be a common occurrence at every table, which is why Ristorante Il Matto is well-known for its phenomenal service. By now, we were full, but there was still another course to sample. Staff decided to serve us a sampler of desserts so that we could taste a variety of sweet treats. The Bomba is a chocolate-coated doughnut that brings a richly decadent flavor. Tiramisu is served in a layered glass and ended up being my favorite.

Crystal fell in love with the Cannoli, but then again it’s one of her all-time favorite sweets. The dessert board was rounded out by a dish of Crème Brûlée. Breaking through the caramelized crust opened up a world of flavor hidden below. The three of us sampled flavors of each item, before finally gravitating to our favorites. In the end, we returned an empty board to the kitchen. Our meal had been an amazing adventure through home-cooked Italian cuisine. After dinner, Paule led us along the cobblestone streets of Lower Town. We welcomed the opportunity to walk off a little of our dinner. As we strolled, she pointed out points of interest that are popular with tourists. Working our way to Rue de Petit Champlain, we rode the Funiculaire to the boardwalk above. This put us right behind one of Quebec City’s most notable landmarks, the Château Frontenac. Crystal and I had passed this magnificent structure multiple times, but Paule would take us on a guided tour of some inside spaces. We discovered that the inside is just as impressive as the exterior. We continued our walk through Upper Town. Crystal and Paule were deep in conversation. I was spending my time noting how the city has a different atmosphere at night. The shadows created from various lights add another layer of creativity to the numerous art pieces found around Quebec City. Even the business signs become artistic visuals after dark. The city is one of the safest that we have visited, especially for nighttime wandering. Everyone seemed engaged in trying to take in all of the sights, as Quebec City is a magnet for international tourism. During the day, we had fallen in love with the ages-old architecture found throughout Old Quebec City. While the area where we dined was filled with English design, here we noticed other influences. Clearly, the French held a lot of sway in the designs. We had been told that Quebec City is the closest thing to visit Europe that you will find in North America. What we discovered is that it has similarities, but it is truly a city unlike any other on Earth. French, English, Spanish, and even Art Deco influences are found scattered around the city. 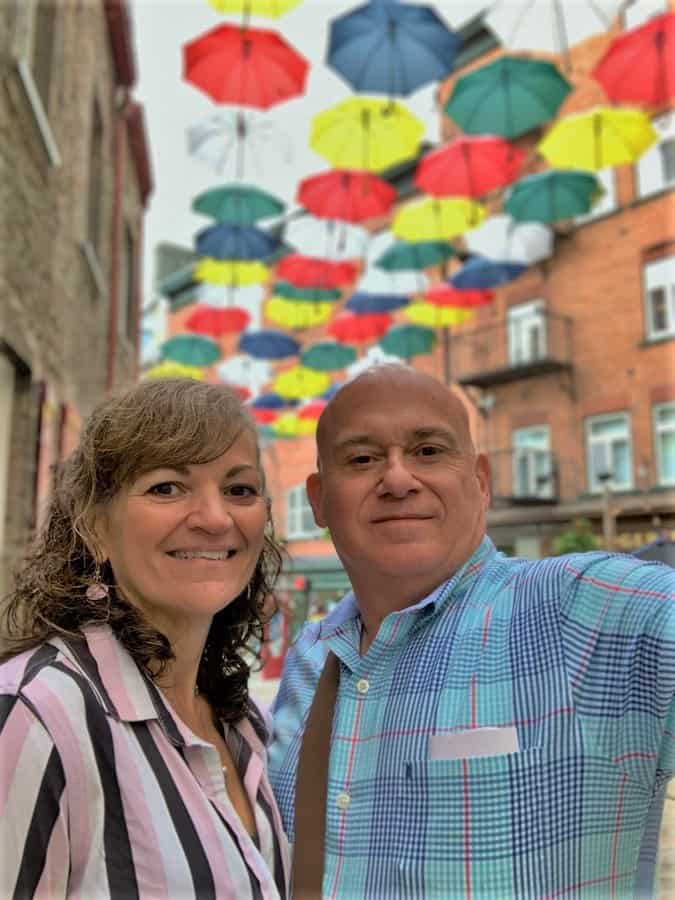 Our evening ended up being one of the most memorable of our time in Quebec City. Having the opportunity to meet Paule face-to-face had helped cement our newfound friendship. Dinner at Ristorante Il Matto had provided more than just sustenance. This was an event that drew us into the restaurant’s concept of providing an Italian homemade meal experience. Having a guided walk through the streets at night had opened our eyes to another level of appreciation for this romantic destination. We never knew we could fall so deeply in love with a city.

Pin this to your Quebec City vacation board!