The Louisiana Purchase signaled many changes in the United States. The addition of 828,000 square miles of new territory nearly doubled the size of the young nation. Early explorers viewed the new lands as stark in comparison to the settled land to the east. It would be branded with the nickname “Great American Dessert” and considered uninhabitable. With a steady flow of Native Indian tribes moving westward, the government saw a need for military presence. On Christmas Day of 1817, a group of soldiers arrived on the western edge of the Arkansas River in a location that would become Fort Smith.

We want to thank Experience Fort Smith and Fort Smith National Park for hosting our visit. rest assured all opinions are our own. Within eight days, temporary lodging had been completed and they set about the construction of the fort. The finished structure had barracks, shops, storehouses, and a hospital. All of these were located inside the sturdy log walls. By 1822, increased hostilities required additional quarters to be constructed to hold more soldiers. Unfortunately, only two years later the government determined that Fort Smith was too far from the area needing the most oversight. Fort Gibson was constructed, in Oklahoma Territory, and the troops relocated to this new site. 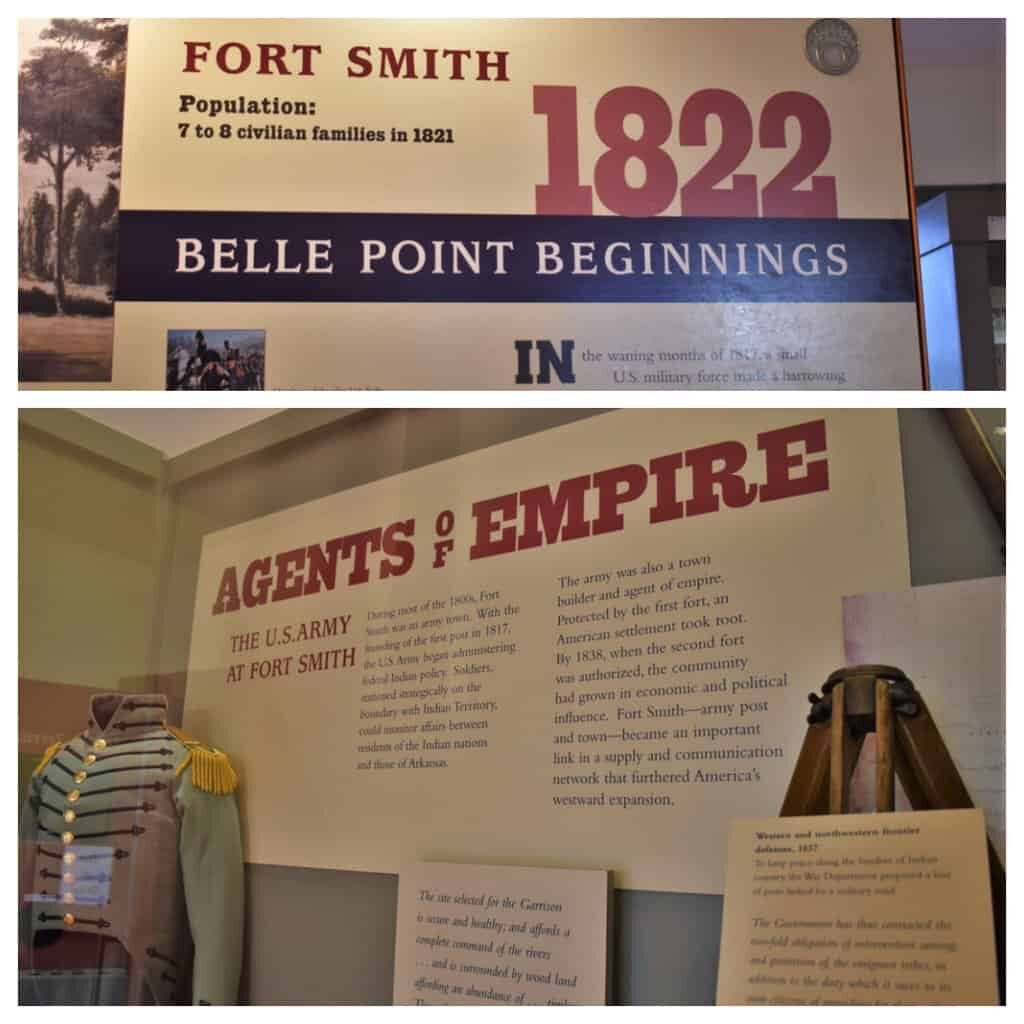 During the time that the first fort had been in use, a small settlement had sprung up. When the Army abandoned its properties, a savvy land speculator bought up the parcels. He would promote the up and coming town of Fort Smith. By the 1830s, the U.S. government was in the midst of their Indian Removal program, designed to relocate tribes from the southeast into Oklahoma Territory. This relocation would become known as “The Trail of Tears“. By 1838, the Army returned to Fort Smith and even expanded the base. This was done to provide additional oversight and limit the impact of settlers among the Indian tribes. Troops spent a large portion of their time patrolling the Wild West, that was found just across the Arkansas River. One of the biggest troubles faced by the troops, was stopping the flow of liquor into Indian Territory. In the early days of the town of Fort Smith, there were six shops, of which five were taverns. It didn’t take long for the Army’s commanding officer to realize that the whiskey problem had permeated into his troops. The ongoing battle to stem the flow of illegal booze into Oklahoma Territory would continue for years. During the time of Judge Parker’s court, in the late 1800s, selling liquor to the Indian tribes was still one of the most common reasons for arrest. Life as a frontier soldier was not easy. Waking hours were often filled with duties that ranged from cleaning to parade ground practices. Quarters were small and bereft of luxuries. Patrolling the border was a necessity, and it was a non-stop endeavor to stop the flow of liquor peddlers. The Indian relocation meant the population in eastern Oklahoma territory had grown substantially. Settlers in western Arkansas demanded a larger military presence to prevent any aggression form the tribes. By the late 1840s, Fort Smith was seeing increased traffic due to the California Gold Rush, as well as the Mexican-American War. The plans for expanding the fort got put on the back burner, as the attention moved from patrolling to more of a supply depot. Fear of armed uprising form the tribes across the river decreased. With the Arkansas River on their doorstep, Fort Smith was the perfect setting to store goods for downstream operations. This phase of the fort’s service would continue until the hostilities of the Civil War overtook Arkansas. When the winds of war blew across the State of Arkansas, the Department of War decided to abandon Fort Smith. This was done in part to prevent munitions from falling into the hands of Confederate troops. The citizens of the area were divided on their loyalties, so many were frightened by the news of the fort’s abandonment. Pro-Confederate troops descended on the fort and captured the few remaining staff members. The Confederates would hold the fort for a year, during which time it became an important supply and communication waypoint. During our visit to the Fort Smith National Site, we learned that the following day would be a reenactor event. By working our itinerary, we were able to open up time to attend. The volunteers were all wearing period garb and setup a small encampment. After mingling with some of them, it was time for the reenactment to begin. The main event was a recreation of the surrendering of the fort, which was followed by a variety of demonstrations. Civil War soldiers were armed with a wide range of weapons, since many were brought from home. The volunteers showed how each was loaded and fired. At the end of the demonstration, they fired off the big gun (cannon) to the delight of the crowd. Exploring historic sites, like Fort Smith, help us piece together a timeline of America’s past. The Wild West days may seem long ago, but many of the events we picture from the past actually took place in the 1900s. It’s just hard to fathom this, since technological improvements happen at a dizzying pace. Sometimes it is good to just step out of the rat race and enjoy learning about the past. Where will your next historic trip take you?