On a warm summer day we rolled into Abilene, Kansas. We arrived from the south, much like the cattle drives of old. The first destination on our itinerary was the Dickinson Heritage Center. This multi-subject museum is a good spot to learn the background of the area, as well as some extra informational tidbits. The museum is located in a section of the city that has a collection of historical sites and specialty museums. It was nice to find that many of the places we would be touring were all within walking distance of each other. The Dickinson Heritage Center begins with a chronological walk through the growth of the city of Abilene, Kansas. It is split between indoor and outdoor exhibits, so we began with the indoor museums.

We want to thank the Dickinson Heritage Center and Abilene Visitors Bureau for their hospitality. Rest assured all opinions are our own. The land that makes up Dickinson County was for many centuries home to the Plains Indian tribes. Traders and trappers would enter or cross the lands, but it was for the most part rolling prairie. The 1803 Louisiana Purchase secured the land for the U.S., but it would take another half-century before any permanent businesses would enter the territory. In 1857, Timothy Hersey opened a stagecoach stop in the newly formed county. He named it Mud Creek, but that name would not stick. In 1860, the name Abilene, which means “City of the Plains” would be adopted. In 1867, the railroad would build through the town and the future growth would be secured. Joseph McCoy would purchase a spread nearby and construct the Drover’s Cottage. These last two events would be the impetus for the fast paced growth the town was about to see. McCoy’s spread included building stockyards that could handle about 2000 head of cattle. With the railroad spur added to service Abilene, it was now time to move into action. McCoy would encourage Texas cattlemen to drive their herds to Abilene, so that they could be moved east by rail. In September of 1867, the first 20 cars were moved and Abilene would forever have the title of the first “Cow Town” west of the Mississippi River. In that first year, it is estimated that 35,000 head of cattle were shipped east from Abilene, Kansas. The Chisholm Trail would become the cattlemen’s highway to bring their herds north. Long Arm of the Law

The cattle drives brought prosperity to Abilene, but not without a price. After months on the trail, cowboys were ready to celebrate their arrival. The town’s Marshall, Tom Smith, would keep the peace with his bare fists. This worked for a while, but he was murdered in 1870, and his replacement was more accustomed to handling problems with a firearm. The name Wild Bill Hickok is widely known these days for his marksmanship, and his tenure as Marshall brought stiffer control to the swelling crowds. Dickinson Heritage Center has a handful of weapons that were used by lawmen of notoriety. Most of these were quickly identifiable, so we felt more in touch with the past. 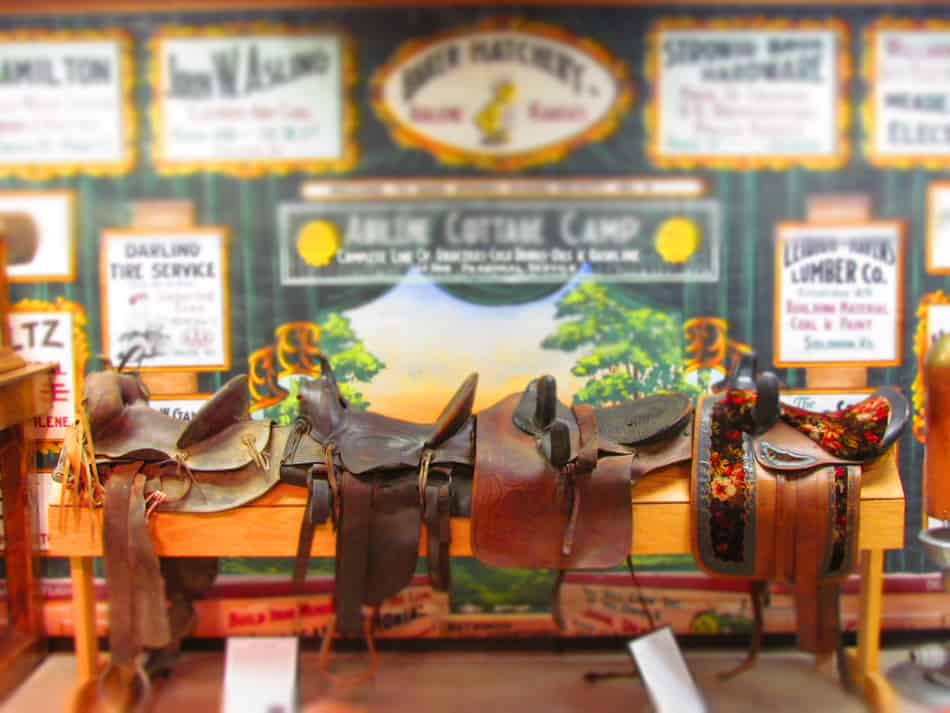 There are lots of interesting displays in the history section of the museum. As we passed through, we noted sections that highlight farming and agriculture, the pioneers, trappers and traders, and the cowboys. It’s fun seeing so many artifacts that are quickly recognizable, as well as the ones that make us scratch our heads in wonder. For us, this type of attraction is part of our continuing education. A common artifact we find in many history museums is an old fire vehicle. Sometimes it is a motorized engine truck, while others are earlier editions. In Abilene we found a horse drawn pumper that would have been manned by volunteers. It wasn’t until I was assembling the pictures to create the storyboard for this article, that I realized just how many pictures I have taken of the various red crafts. I guess there is something about them that draws my attention. The Dickinson Heritage Center is also home to the Museum of Telephony, which is the history of the modern telephone. We are sure that many of you remember pulling a string tight between a couple of cans to create your own primitive version. These versions are quite a bit more sophisticated, so there is plenty of informational signage to help describe the history of this device. While there are competing thoughts on who the original inventor was, the most notable patent holder is Alexander Graham Bell. It was actually nostalgic to see some of the phones that we remember from our younger years. Of course, quite a few were before our times, but we were still familiar with them. It would be interesting to bring our grandkids here and let them experience this early technology. We are sure that they would find the character phones amusing, but wonder what they would think of a rotary dial phone.

Speaking of a rotary dial, the museum has an assortment of interactive displays set up for visitors to use. This allowed us to experience some of these earlier styles of phones. One of the displays we liked the most was the one that shows the inner workings when people would make a phone call. If this is the technology that was required for just one call, can you imagine a building filled with these devices?

The Dickinson Heritage Center has an assortment of historic structures located behind the main building. Visitors can tour a school, blacksmith shop, barns, and an old homestead. While we have visited other sites with early wooden homes, this one had the most complete upstairs portion that we could remember. Every time we tour one of these older homes, we become more thankful for the room we have in our own house. It’s all about perspective.

A huge draw for the museum is their original 1901 C.W. Parker carousel. While many people are familiar with this Leavenworth, Kansas company, fewer realize that he started it in Abilene. He remained there until the move in 1911. The Dickinson Heritage Center has one of his early carousels, that has been meticulously restored.

We took a ride on it and quickly discovered that it had a most unusual feature. Unlike most carousels that go up and down, this one is actually a rocking ride. The horses move forward and backward, which is more realistic of an actual horse. It certainly made for a special highlight to our visit. With a better understanding of the historical significance of the city, we were excited to continue exploring. Be sure to make time to visit the Dickinson Heritage center on your trip to Abilene, and you will definitely want to take a spin on the carousel. If you enjoyed this article we would appreciate a little feedback. Feel free to leave us a note in the comments section below. Thanks!