Back in 1982, we began our family with the birth of our daughter. By that time, the Precious Moments figurine craze was growing. The bulb-eyed figurines were flying off the shelves as fast as they could be restocked. Artist and creator Sam Butcher was preparing to launch on a journey to find a home for the pinnacle of his dream. During a stay in Joplin, Missouri, he felt the call to build in the heart of the country. Nearby Carthage would become the home of the Precious Moments Chapel, which would draw in millions of fans. These days, the changing times have caused the crowds to dwindle. Although, the dream of this janitor-turned artist still remains. His foray into business involved Sam and a friend, Bill Biel. Originally, it was two-dimensional drawings used for greeting cards and posters. At a Christian Booksellers convention, they were greeted with an overwhelming demand for their products. Soon after, an American giftware distributor approached Sam with the request to produce a three-dimensional prototype. His first piece was titled “Love One Another” and was produced in porcelain. In just a few short years, Sam had created a line of 21 individual figurines. The statuaries created from Sam’s art quickly grew in popularity. He would receive tons of letters from adoring fans who felt touched by their message. By the mid-1980s, Sam was on his quest for a new home base. His grand design would include a chapel where he could express his faith and love for God. A visit to Rome had provided him a view of the Sistine Chapel. This would inspire him to create his own masterpiece that would console and inspire others. 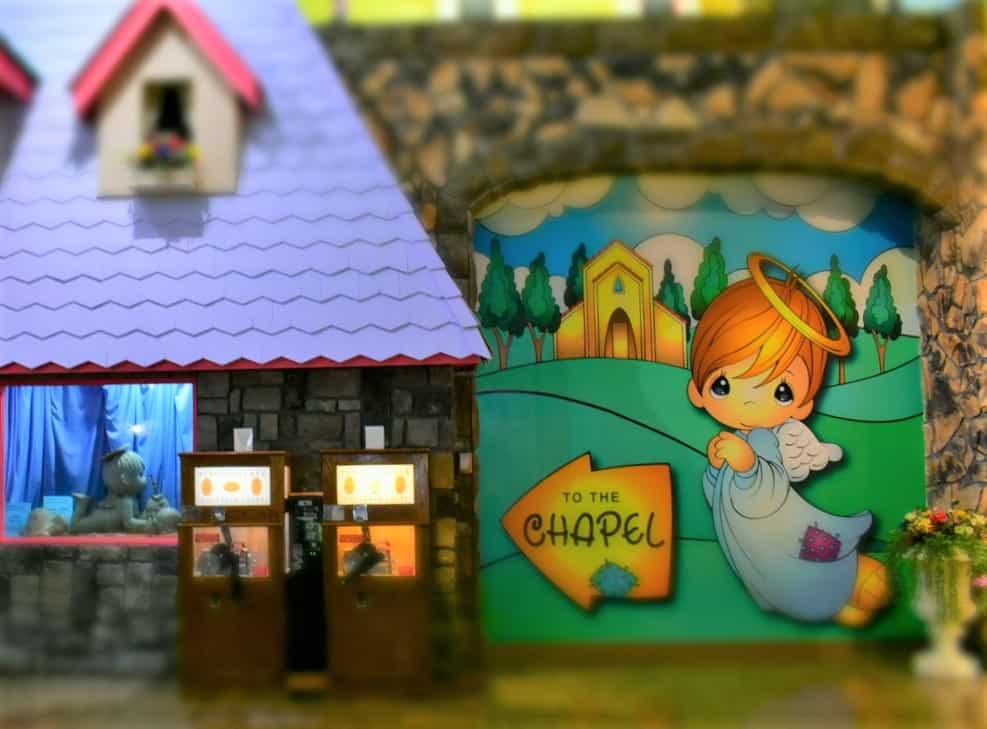 With an air of determination, Sam set about fulfilling his dream on the outskirts of Carthage. It would take five years of painstaking work to create and decorate the Precious moments Chapel. He opened it in 1989 and it has since been visited by millions of people from around the globe. The monies earned from the sale of his figurines were pumped back into this project. To allow everyone the opportunity to see his handiwork, the property offered free admission. Being located on the edge of the Ozarks made it an ideal stop for people traveling Route 66. While the changing times have lowered the number of visitors, there is still a steady flow on most days. We had made a visit many years ago, but the memories had faded. This time we were seeing it with fresh eyes. Entering through the gift shop, we chose to take a self-guided tour. After exploring the visitors center, we made our way outdoors. The day was overcast and filled with rain showers, so we skipped an in-depth view of the grounds. Staying along the paved pathway led us to the shrub-lined entrance to the Chapel. Hurrying down it, we entered the serene space to view the grand work of Sam Butcher. During the construction of the chapel and supporting buildings, Sam had time to think about the subject of his decorations. He wanted it to be a reflection of his deep belief in God. When we entered the main Chapel, we were greeted by the massive “Hallelujah Square” mural. It is designed to be a reflection of heaven through the eyes of a child. The painting shows a young girl standing at the gates of heaven. A gathering of angels is ready to welcome her in. Scattered throughout the paintings are images of people that are dear to Sam. Many of the characters that touch our hearts express the hope that Sam has for those that have gone before us. While Sam had spent many years creating this masterpiece, his personal life was filled with difficulties. After completing the chapel, he moved his family to St. Charles, Missouri. He also created a resort in the Philippines, where he would spend more and more time. It was during one of these visits that he lost his son, Phillip. To counter his grief, he threw himself into his work. This would lead to him creating Phillip’s Room at the Chapel. His children saw the effects on him and took over the management of his business. This allowed him to return to the Philippines for an extended stay. Once again tragedy struck the family with the loss of his son, Tim. This inspired him to create a bell tower in his honor. As we wrapped up our visit, we were filled with so many memories from our early days of marriage. Seeing the cherub-like figurines reminded us of the times when our kids were still just passengers in the backseat of our car. The changing times have seen them grow into adults and even bless us with grandchildren. Who knew that this short stop at a Midwest attraction would bring us back to our beginning. It made us wonder if we had any of those early figurines stashed away in one of our totes filled with our family’s memories.

Pin this to remember the Changing Times!