For almost seven decades, Wonderland Park has been bringing fun to the Panhandle. In the early ’50s, Paul and Alethea Roads traveled to Amarillo to look over some potential property where they might develop an amusement park. While their first impression was less than impressive, a second viewing opened their eyes to the potential. That was in 1951 when the idea of creating one of these types of entertainment venues was still rare. There were only three other parks opened that year. All were fairly small, but offered the growing population some places to play.

While Wonderland Park started with just three rides, over time the family has expanded the site to include plenty of entertaining options. The original owners have handed off the responsibility to their kids. Paul and Paula Borchardt, and their family, now operate the park and keep everything running. When the opportunity to add this attraction to our itinerary presented itself, we jumped on it. After all, who doesn’t like to explore a park that they have never visited? A day filled with indoor exploration had us eager to enjoy some outdoor activity.

We want to thank Visit Amarillo and Wonderland Amusement Park for their hospitality. Rest assured all opinions are our own.

What is three stories tall 500 feet long and one of only three in the country? We’re talking about the Cyclone. Each car holds one or two riders and takes them on a back and forth journey. We first spotted this ride as we traversed the park on the Sky Ride. As we passed by, we could see the laughing riders enjoying this unusual coaster. With a top speed of around 17 miles per hour, it wasn’t burning up the tracks. Still, a series of switchbacks and drops make this an entertaining ride.

Across from the Cyclone, we spotted Mouse Trap. This steel coaster was built in 1972, so it uses the chain lift to get the cars to the top of the first plunge. With four riders per car, they can propel 12 people at a time. This helps the line move fairly quickly. Mouse Trap is over five stories tall and more than three times as long as Cyclone. With a good series of turns and drops, it kicks up the thrill level. Be sure to take a spin after dark to get an added level of excitement. For those who like to go in circles, they have some options at Wonderland Park. The owners wanted to make sure they were bringing fun to the Panhandle for all types of riders. The Rainbow reminded us of taking a ride on a platform. It rotates from side-to-side until it is spinning the platform (and it’s riders) around in full loops. It reminded us of rides we have seen at various carnivals, except this one remains on-site. Nearby we found the Wonder Wheel, which is their version of a Ferris wheel. With 16 cars, it can certainly keep up with a crowd. This is another ride to enjoy after dark, as it offers great views of the whole park. Trying to fit all of the fun possible in a limited space would normally limit a park’s ability to offer variety. This is not the case at Wonderland Park. They are bringing the fun to the Panhandle in the air, on land, and even on the water. For those in the know, Amarillo sits close to Palo Duro Canyon. Being such a huge attraction, the 2nd largest canyon in America, it only seems appropriate that there would be a ride fashioned after it. Sure enough, hop aboard the Rattlesnake River Raft Ride and you float through the changing landscape. Bonus that it offers a chance to cool off from the hot Texas sunshine. Now if you make it through your raft ride without getting soaked, perhaps you need to press your luck a little more. We have experienced a variety of log flume rides, but this one has a distinction that no other can claim. The Big Splash Log Flume was designed as the prototype for log-rides all over the world. It is a short ride, measuring less than 600 feet long. That won’t matter when you tell your friends about your experience on this first-of-its-kind ride in the heart of the Panhandle of Texas. As the sun set to the west, we watched a car full of riders whoosh by on the Hornet. Like many other amusement parks, some of the rides at Wonderland had a previous life elsewhere. This one came from Houston, where it had been kept indoors. Now that it was freed from its cage, it was entertaining riders of all ages under the Texas sky. Being a more modern steel coaster, it gets riders moving quicker than some of the older rides.

All of this excitement had worn us out a little, so we decided to investigate the southern end of the park. Here we found that they are bringing fun to the Panhandle in a different way. While many of the thrill rides have height limits, the kiddie section is filled with attractions for all ages. There are even a couple of rides that we were too big to ride. One that is perfect for everyone is the Merry-Go-Round. When we discovered that there are 10 special “Parker” horses onboard, well we just had to check it out. After all, we had the fortune of visiting the C.W. Parker Carousel Museum in Leavenworth, Kansas.

During our sky-high ride earlier in the day, we had spotted a miniature golf course. If you remember our mini-golf escapades in Gatlinburg, then you know that it’s hard for us to pass up a chance to compete.

To be honest, we don’t keep track of our scores, but we certainly recognize which one of us is on target during a round. We were impressed at the variety of obstacles that they had on their course in Amarillo. By the way, for those wanting to just play miniature golf, there is a separate entrance just for this attraction. As dusk faded and the darkness grew, it was a good time to enjoy another trip on the Sky Ride. The peaceful pace allowed us to take in the whole park laid out at our feet. We could also see part of the surrounding city lights. All around us families were enjoying an evening of fun. The screams of excitement echoed through the night and soon we were anxious to return to exploring the other rides. As we walked along the main path of the park, we spotted The Pirate Ship. These gondola style rides make for a good diversion from the nearby rollercoasters. Watching from a distance, the ride seems rather docile. Once you climb aboard, you gain a completely different perspective.  As the ride is propelled higher and higher, you find the butterflies in your stomach become more active. The screams of delight fill your ears and confident laughs are heard more as it slows down than when it was gaining momentum. 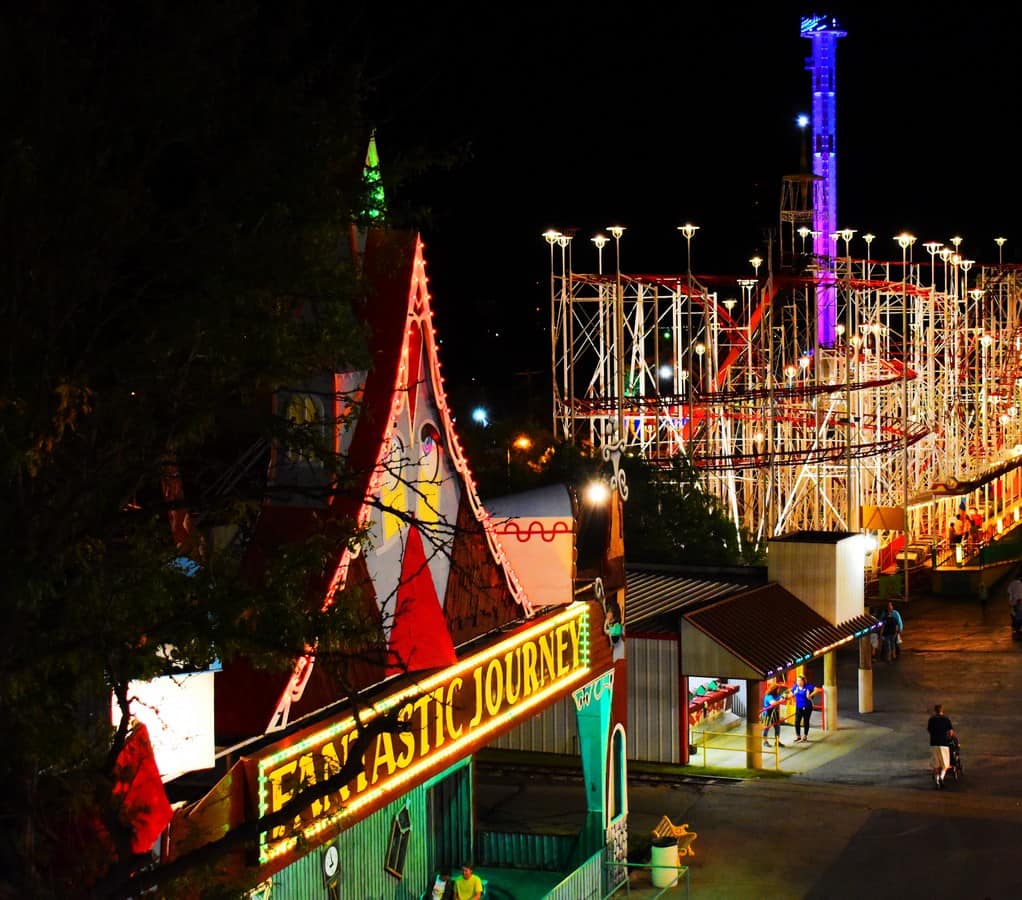 Our evening of fun was drawing to an end, but we still had time for one more ride. Fantastic Journey is the epitome of a one-of-a-kind ride. The founder of Wonderland Park built this ride himself. We wonder if it was just coincidence that Paul Roads hailed from the state of Kansas. Learning welding skills while working at Cessna, in Wichita, helped him in later life as he designed and built rides at his park. Amusement park owners are a small group and many form lasting friendships. They will share ideas and help each other out, when possible. These friends provided the spark to help get this funhouse-type ride operating.

As we slid into the car, we were anxious to see what was waiting for us inside. We found a variety of gags inside, but we’ll keep some of the suspense a secret. Do watch out for the run-away truck. As you pass through the rotating barrel, remember that this was designed and built by the original owner of Wonderland Park. Paul certainly knew a few things about bringing fun to the Panhandle of Texas. Bringing Fun to the Panhandle

Our time at Wonderland Park had come to an end, and it was time to say our goodbyes. We had met some wonderful people and enjoyed an evening of entertainment. The Borchardt’s had been so welcoming to us that we felt like part of the family. They say things are bigger in Texas and that certainly applies to friendship. Keep Wonderland Park in mind for your next family vacation. After all, this place knows a thing or two about bringing fun to the Panhandle.