The Sedgwick County Zoo has a history of continuous improvements. Since it’s early days in 1971, this Midwestern zoo has had big dreams, which it strives to fulfill. With almost 300 species, this zoological park has blossomed into a major attraction.

We want to thank the Sedgwick County Zoo for their hospitality. Rest assured that all opinions are our own. The morning we visited the Sedgwick Zoo was unseasonably cool. The previous day had actually seen snow in the forecast, which was certainly not what we wanted in May. Of course, we are in Kansas, so drastic weather changes are too often the norm. Our timetable was tight, so we decided to hit the biggest draw attractions. On our way, we passed by the Children’s Farm, the fairly new Penguin Cove, and the Amphibian & Reptile displays. A stop in the tropics offered a chance to enjoy the warm temperatures, as we waited for the sun to do the same outside. We were delighted to see all the beautiful plumage on display from the tropical birds. It seems that Crystal is a magnet for all species of animals, and had some fine-feathered friends checking out her boots. Fortunately, she is not timid, and actually delighted in the extraordinary attention. Soon enough we had peeled off our jackets, as the warmth overtook us. We knew it was time to move along. We passed quickly through part of the North American zone, since we had seen this before, and we were hunting newer exhibits. The next area was one we had not experienced, so it definitely piqued our interest. The entrance to the tiger exhibit is dramatic, and highlights interesting facts about the big cats, as you close in on them. Soon enough, we arrived at the main display. 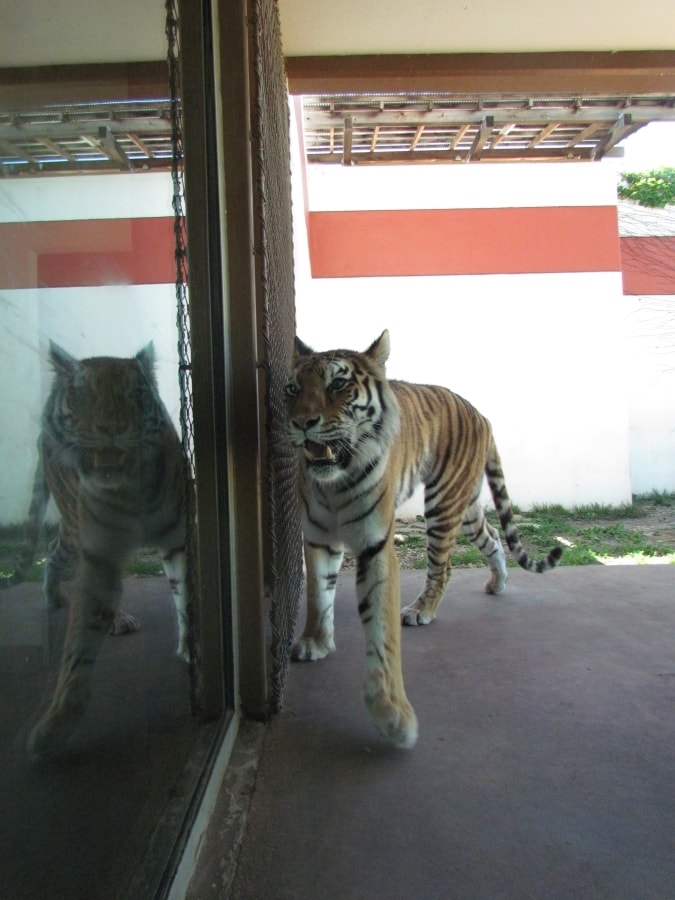 During our visit we saw two tigers. They had them separated into two areas, with one clearly more active than the other. We love to watch these beautiful creatures move, and are always amazed at the size of their paws. We stayed for a bit, and then went to see the red pandas. Unfortunately, they were a little more lethargic, so our stay was pretty short. Our next destination was the Africa section of the Sedgwick Zoo. This was the area that we felt held the largest changes, since our last visit. One of the first displays we came to was the Gorilla Forest. We took a few moments to ponder what this large male gorilla was contemplating, as he sat on a rock. I would like to believe he was wondering what we were thinking, as well. As we moved a little farther into Africa, we spotted the elusive Okapi. These secretive, and secluded beauties are a relative of the giraffe. They are so rare that they are only on display at about 35 zoos worldwide. Later that day we would have the chance to get a lot closer to one. You can read about that experience here. We moved along, and ended up in what looked like a small African village. Throughout the Sedgwick Zoo, we noticed many of the necessary buildings are designed to blend well with the area where they reside. The picture above includes a refreshment stop, and a maintenance building. The interesting design makes them fit much better into the landscape. 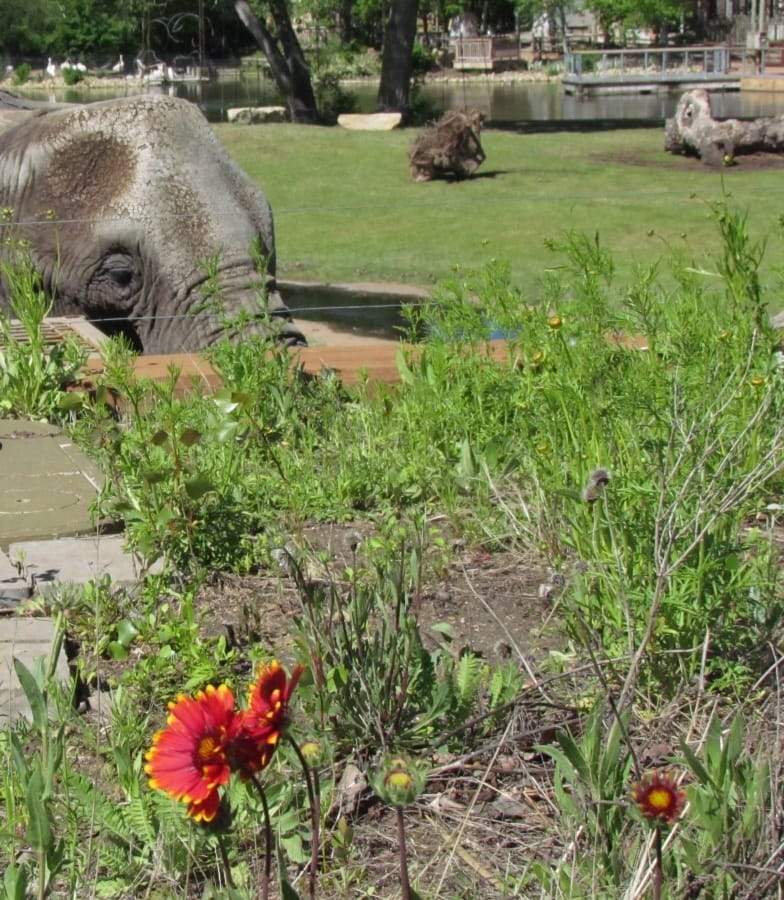 Our arrival in the Zambezi River Valley was the exhibit we were most anxious to see. This sprawling area encompasses more than five acres, which makes it the third largest elephant habitat in the United States. Yes, it is right here in Wichita, Kansas. This is the kind of exhibit that most people would expect to have to travel to one of the coasts to see. Of course, we have found that there are plenty of great sites in our “fly-over” states. Our first impression of this new area was Wow! The open expanse is HUGE. Now many times when parks decide to open up more land for an exhibit, they don’t always consider the layout’s access for visitors. That is certainly not the case at Sedgwick Zoo. The open space wraps around a center-point, which contains a covered veranda for guests to watch these gentle giants. A stream runs through the area, which supplies fresh water for the elephants, and entertainment opportunities for the public. All of this area was easily visible as we wandered along the paths that run beside the enclosure. While I was setting up for a quick selfie, I had my attention focused away from the exhibit. During these few moments a family of ducklings came ashore. They wandered fearlessly toward a dining pachyderm, until it made a sudden movement. They quickly reversed direction and made their way back to the water. I missed it, but Crystal had a bird’s eye view. (I know that was another terrible pun.) Wrapping Up Our Visit

Too soon, we had to move along, and next came upon the lion exhibit. We were quite impressed with the design of this area, as well. A large boulder in the middle of their island allows them to keep a watchful eye on the other exhibits. We watched the pair interact for a while, and then started moving again. A quick look back showcased the photo that I took for the header of this article. We had to stop for this opportunity, and once I was pleased with the composition, we started back up. As we continued strolling, we took in views of the hooved animals, and finally the African Painted Dogs appeared ahead. I was interested in watching them for a while, but they seemed to be ready for a mid-day nap. Oh well, we still had plenty of great views that day, and lots of good photos to edit. It was time to wrap this visit up, and head to lunch. We are hopeful we will have more time on our next visit, since we are confident there will be more new attractions for us to see. When was your last visit to Sedgwick Zoo? Don’t you think it’s time to plan another?