How many of you remember curling up with a copy of the Guinness Book of World Records? It was always amazing to read about the various accomplishments that could get you into this annual tome. As youths, we would daydream about becoming the next big record setter in some odd or outlandish scheme. Little did we know, that we would actually have an opportunity to challenge ourselves to become a record setter. During our Smoky Mountain trip, we visited the Ripley’s Guinness World Records Adventure in Gatlinburg. We certainly weren’t going to pass up an opportunity to make it into the record books.

We want to thank Ripley’s Gatlinburg for their hospitality. Rest assured all opinions are our own.

We were still dealing with the on and off showers, but were not going to let that interfere with our plans. After a day of exploring the Ripley’s Aquarium, we decided that we might as well check out another one of their sites. (You can read about the aquarium here.) We had finished our dinner and spent some time rummaging through the numerous shops that line the strip. When we came to the Guinness site, we were ready to do a little fun exploring. Once inside, the first task is to get yourself set up with an Adventure Pass. This allows visitors to participate in the world record challenges and perhaps become a record setter. With pass in hand, it was time to dive in.

Seeing the Skills of Others

Guinness World Records is a cross between a museum and an interactive gallery. Many of the exhibits are designed to show visitors the odd and amazing. A slew of video boards showcase the skills that some of the previous record setters used to make it to the coveted title of world’s best. Even without the opportunity to become a record setter, there is plenty to see and do. One for the Record Books

Let’s face reality, many of the world records are in some pretty obscure areas. It’s unlikely that we will ever obtain a celebrity status that will win us a place in that area of the record book. We enjoy playing some games of skill, like Skeeball, but don’t expect to ever top the charts in that area. Of course, we did see a couple of kids making their attempt at Galaga. Neither of us plan to enter into a food eating contest, which seem to be quite popular. We were quickly discovering that we may not have what it takes to become a record setter. Oh well, we could still have plenty of fun matching ourselves up to the existing world record holders. I decided that perhaps a shot at paper football may be my way into the book, but after multiple attempts it was clear that I would not become a record setter. 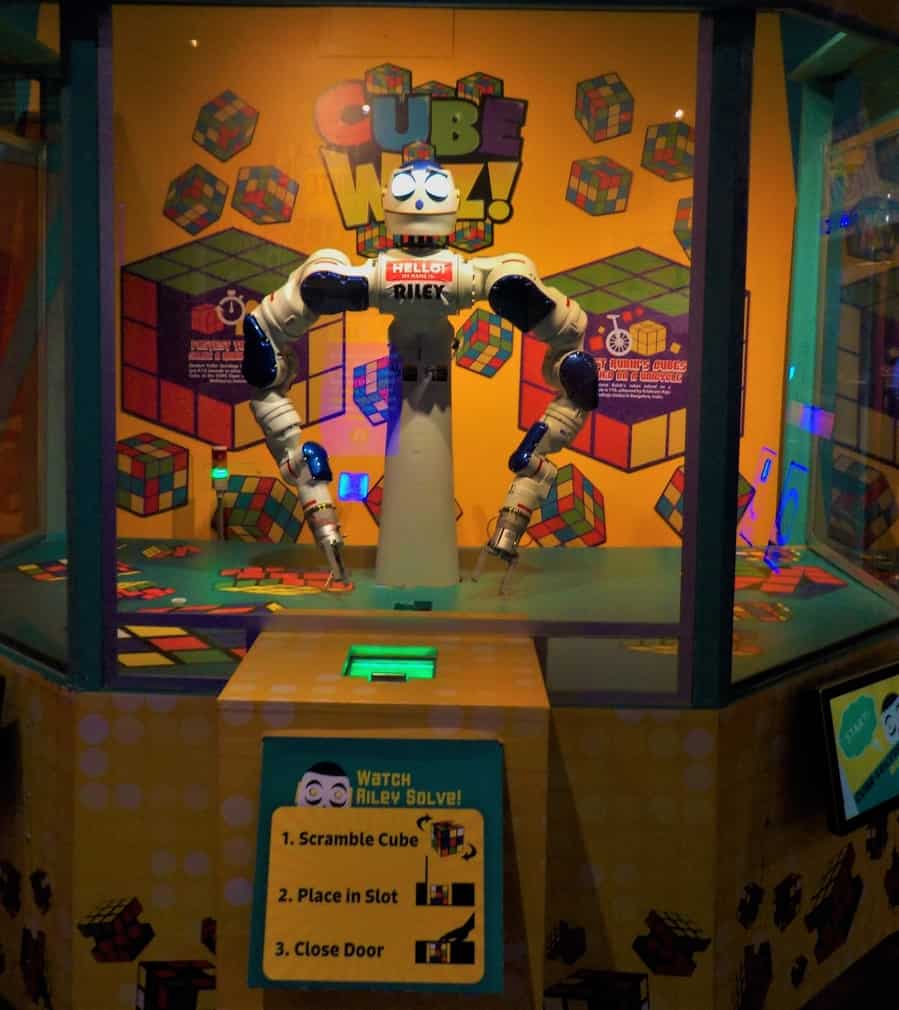 With my world record dreams dashed, it was time to get back to just enjoying the displays. One that caught my eye was Riley the Rubik’s Cube solver. Hmm. This sounded like an unusual exhibit and one that we would have to see for ourselves. The object is to mix up the colors on the cube in an effort to stump the robot. We knew that a simple couple of turns would not be enough, so we really jumbled it up. After placing the cube back into the box, the robot takes over. We watched as it methodically spun and turned the cube until all of the colors were back where they belong. This takes a while, since it is much more deliberate in its approach. We have seen kids do this task in mere seconds, but watching Riley actually helped us better understand how the task is accomplished. Something for the Kids

The exhibits that allow visitors to become a record setter are designed to be appealing to all ages. Sure the kids will be all into playing the games, but we saw plenty of adults engaging, as well. In fact, we were a couple of them. After all, when was the last time you played hopscotch? Using the Adventure Pass allows visitors to play as many of the games as they desire. While we knew that we had a slim chance of becoming a world record setter, we could still enjoy ourselves. In some ways, the Guinness World Records Adventure is like an interactive arcade. There are plenty of games to be played, and you never know if you might just be the one to get your name in that annual book. By the time we completed our visit, we had decided that we weren’t cut out to become a record setter. That’s okay, since the fame and fortune would have certainly gone to our heads. The Guinness World Records Adventure offers 10 stations that allow visitors an Official Attempt at setting a world record. We realize that it is pretty slim chances, but found out that it has already happened more than 20 times. It goes to show that inside each of us there is a world record attempt just waiting to be released. Maybe you will be the next one to make it into their yearly book. If so, you can bet that we will see it and say, “Hey I could do that!” What world record do you think you could break?

Share with someone who should be a record setter!