Visiting Weston offers a mix of new and old. This somewhat sleepy little river town holds its secrets close to the vest. Those who take the initiative to explore will be rewarded with unexpected finds. A good example is the National Silk Art Museum. This local treasure is situated squarely on the main drag and even has the denotation of ‘Museum’ on the front of the building. Even with that, it still seems to be overlooked by the majority of visitors. We popped in on a bright sunny morning to find out what we would find inside and to learn about this particular stitch in time. Walking through the door, we were welcomed by John Pottie, museum founder, and curator. After introducing ourselves, he was happy to offer us a cursory overview of the museum and the process of weaving over the years. John hasn’t always been a collector of silk art. In his past life, he was a restaurateur. It was by accident that he purchased his first weaving at an antique mall back in 1980. When he discovered his new treasure was not an engraving, he went off in search of more information. This was the start of a 20-year quest to procure as many pieces as he could find. After moving to Weston, he finally showcased a portion of his collection at his downtown restaurant. A Stitch in Time

As John continued our education, he pointed out an old German loom. This system utilized keypunch cards that identified the pattern for the machine to apply various colors of thread. A nearby series of cards show some of the patterns that have been created using this process. It is hard to fathom that this type of process was being implemented. The keypunch card was the segway to modern calculators and computers, and to think it was in use at the beginning of the 1800s. To put it in perspective, this would have been about the same time as the Louisiana Purchase. John made sure we understood the importance of keeping the age of silk art in mind as we were exploring the museum. The stitch in time that created many of the woven pieces made them almost as old as the United States. Now that we had a feel for the extraordinary work required to create these pieces, it was time to do a deep dive into the National Silk Art Museum. John pointed us toward the galleries, which are displayed in three rooms. As we made our way through the spaces, we noticed that it is actually a series of collections. Many of the pieces are grouped by subject, topic, or country of origin. Seeing the depth of details made many appear to be more photo-like than just a weaving of threads. The Colors of Life

Each piece brought another set of details that were hard to truly appreciate. When you see the amazingly bold colors, it is easy to forget that some of these pieces are well over 100 years old. Just when you think you have seen it all, you come upon another piece that captures your attention. Who would think that they could capture the fine details of reflections in a lake? Just as we were, these pieces will surely surprise you. 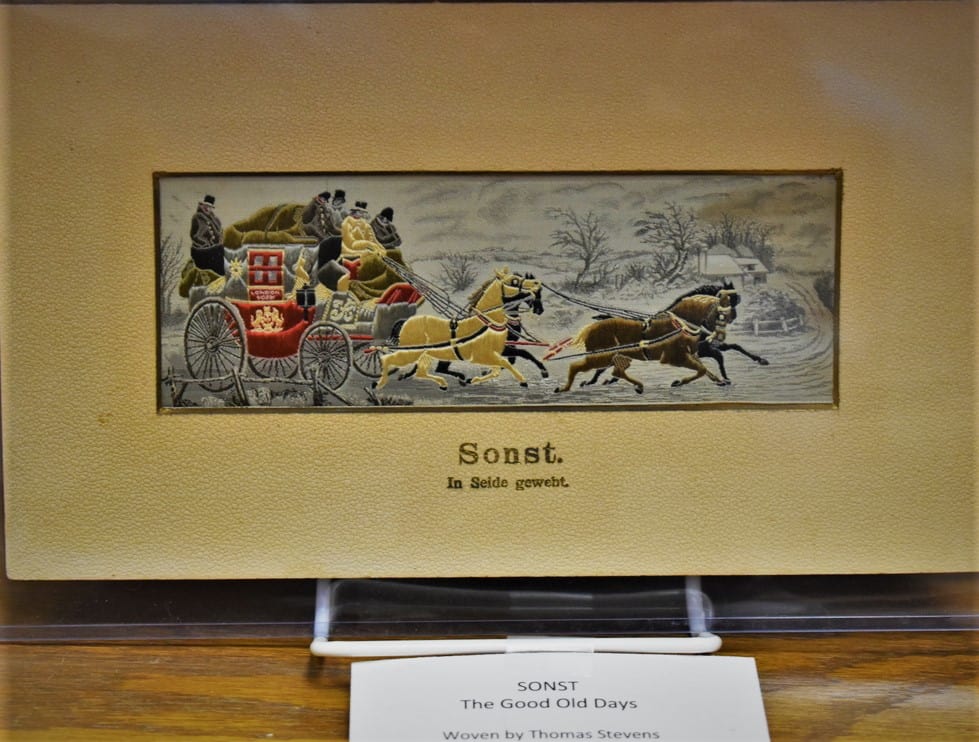 While many of the weavings on display are substantial in size, there were some smaller pieces, as well. A collection from Thomas Stevens was similar in size to bookmarks. Working in the mid-1800s, this artist produced an extensive assortment of art pieces. He was one of the first weavers to mass-produce his pieces, which allowed him to expand his marketplace to the masses. Some of his more than 900 designs were used in greeting cards. A large portion of his company records was destroyed during World War II.

Picture in a Picture

While weavings have existed for hundreds of years, there are specific periods when it peaked. From what we could surmise, this was the 1800s. By that time, artists had nearly perfected their art. This stitch in time was heralded at many special events, like the 1851 Great Exposition in London. The National Silk Art Museum gives a nod to this with a collection of pieces about Joseph Charles (also called Jacquard). This French weaver played a pivotal role in the development of the keypunch system that revolutionized silk art. His portrait is seen not only in its original form but also replicated in a piece showing the ability of weaving looms to produce his likeness. It’s an early nod to the picture in a picture. A Two Sides to Every Story

After exploring the various galleries, we made our way back to the museum entrance. John was waiting for us and asked for our feedback. We spent a few minutes talking about all of the details that we discovered during our visit. Our discussion turned to the amazing details we found in the various pieces. John asked if we noticed the difference between the front and back sides of one particular weaving. When we mentioned we had overlooked it, he took us back for another look. We were amazed at the way the piece has an almost negative look when viewed from the opposite side. When we entered the National Silk Art Museum we were unsure of what to expect. Little did we know that this visit would open our eyes to this unusual art style. While we have seen our share of tapestries and other textile artwork, at places like the Nelson-Atkins Museum of Art, the techniques used to create them had escaped us. Armed with this new appreciation for the labor of love required, we felt satisfied that we had continued our adult education. This visit was our own little stitch in time that brought us a new appreciation for an underappreciated art form. How many of you knew about keypunch card processes in the 1800s?