Have you ever found yourselves with just one day to see as much of a new destination as possible? This would be the situation we faced when we made our first excursion into Alabama. A peaceful beach vacation is obviously not something we can do, so we decided to add a day trip to the mix. Since we were staying on the Mississippi Gulf Coast, it was just a hop, skip, and jump to reach Mobile. Starting with our usual early morning departures, we found ourselves crossing into the Cotton State in about one hour. Thirty minutes later and we were on our way to discover 7 sensational stops in downtown Mobile.

We want to thank Visit Mobile and the local businesses for hosting our visit. Rest assured all opinions are our own. 1) Begin the day with Beignets

Our coffee had kept us going during the drive, but our tummies were telling us they wanted something more substantial. There are plenty of ways to fill a void, but few are as satisfyingly sweet as a visit to Mo’Bay Beignets. Their fluffy pillows of dough are enrobed with a dusting of powdered sugar. Wait, did I say dusting? This is more than a gentle sprinkle. In fact, they pile on the sweet stuff and even offer up some delectable dipping sauces to boot. With our sugar rush in full effect, we were ready to set out exploring.

2) Changing of the Guard

You can’t truly say that you have explored a destination unless you have taken in its history. We wanted to make sure we got a good dose of the Azalea City’s past, so we set off to find the roots of the downtown. Fort Conde is where Mobile originated way back in 1711. What started as a French colonial site would see quite a bit of action. This region was seen as prime land for gaining a foothold in the New World. Over the years, ownership would sway between France, Spain, and Britain. Once America had won its freedom in the Revolutionary War, it didn’t take long for this site to fall under American control. Now that we were into a history-seeking mood, we headed a couple of blocks over to the History Museum of Mobile. This impressive institution fills in the gaps in the balance of the city’s history. Inside, we found exhibits on everything from the early native tribes to the modern days. Mobile is a city that does not shy away from its past. As with almost any metropolitan area, there are good and bad events in the past. From the long-ago days of slavery and the Civil War, the city has been able to move forward into brighter times. Showing how the citizens were able to alter their future definitely makes this one of the 7 sensational stops in downtown Mobile. Our sugar rush from breakfast was wearing off, so it was time for something to fill the void. We headed up Dauphin Street, which is one of the key boulevards in downtown Mobile. This main corridor is filled with shops and eateries all enveloped in southern charm. There are plenty of dining options, but when we spotted Squid Ink, we just knew it was a place to check out. Stepping through the bright blue façade, we found full-blown quirkiness inside. The funky décor told us that we were about to enjoy some unique eats. They certainly didn’t disappoint and it was obvious by the steady crowd that this place is a hopping joint. Would it surprise you to find out that the American version of Mardi Gras didn’t start in New Orleans? Well, it certainly shocked us to discover that this annual celebration originated right here in Mobile, Alabama. In fact, they still have their yearly party with parades and revelry. As we made our way through downtown, we were reminded of Mardi Gras on almost every block. A visit to the Mobile Carnival Museum would teach us all about the rich history this city has with the well-known celebration. Way back in 1703, the early French settlers were observing Mardi Gras on the banks of the Mobile River. These days the crowds fill the streets in anticipation of catching a Moon Pie being tossed from floats. We learned that prior to 1970, it was boxes of Cracker Jacks that were being thrown. 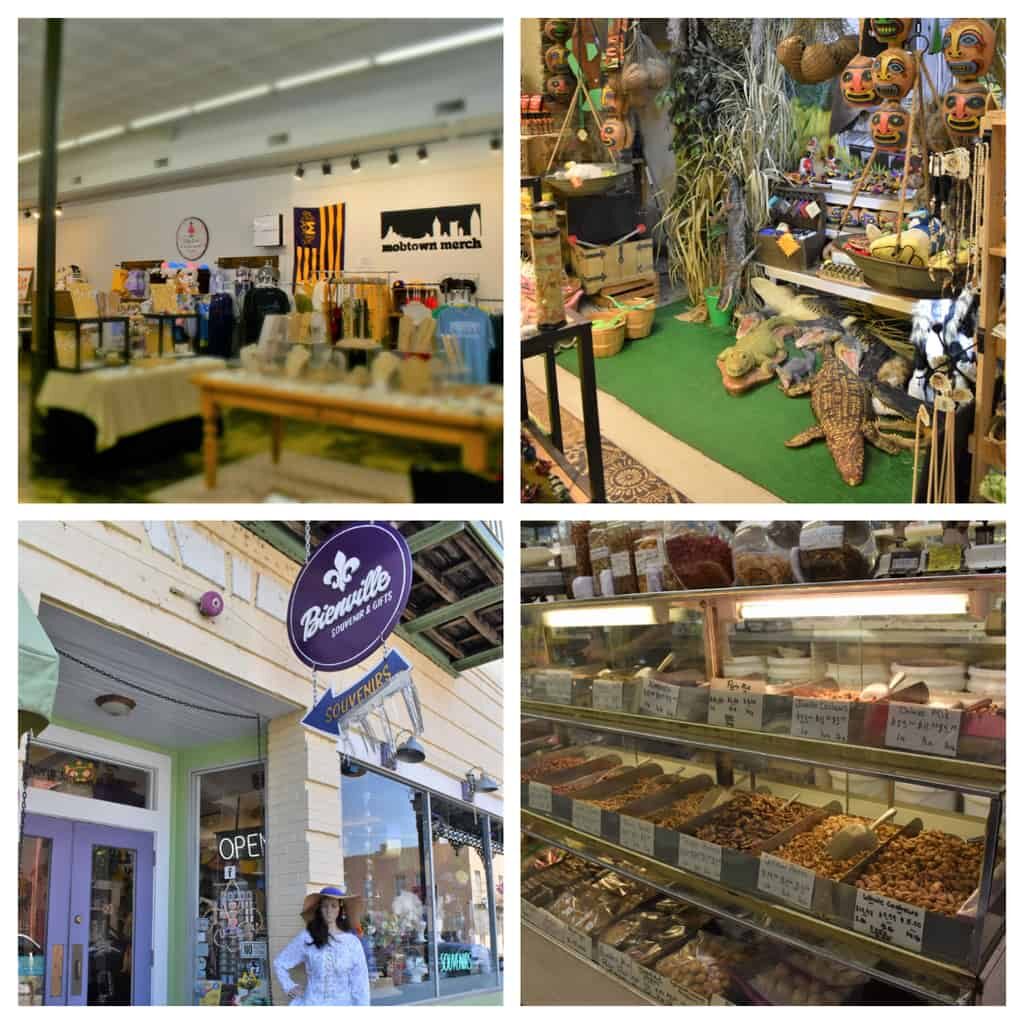 No visit to a new destination is complete for us until we have sampled some of the local shops. We are always on the lookout for some small tribute that we can take home as a reminder of our visit. There are plenty of options in downtown Mobile. Local vendors and creators stuff the shops with merchandise of all types. We found everything from haunted bookstores to historic nut roasters. It seemed like just about anything you could imagine is found in one of the stores. In the end, we were able to gather a couple of nice souvenirs, some gifts for friends, and even some fresh roasted nuts to enjoy on the road. After spending half of a week in the Louisiana River Parishes, we had finally gotten enough Cajun/Creole meals. For dinner, we decided to try some south-of-the-border flavors to round out our 7 sensational stops in downtown Mobile. One of the newer restaurants to grace Dauphin Street is Roosters. The owners have decided to bring the tastes of Latin American cuisine into the heart of the city. After a busy day of exploring, we were ready to chow down on some street tacos and enjoy one of their craft margaritas. The fresh flavors of their dishes were simply amazing. One of our main goals for the day was to prove to ourselves that Mobile has a walkable downtown. All of our stops are easily accessible and from start to finish, we walked just over two miles. Of course, we did add a few more steps when we found ourselves backtracking at times. Some of the sights were just too beautiful to be taken in with one viewing. In the end, we were pleased that we could squeeze these 7 sensational stops in downtown Mobile all into one visit. With our first foray into Alabama a rousing success, we knew that we would have to plan more excursions into the Cotton State. Now, which of these stops intrigued you the most?