4 Steps For Success At Ol Stuga

4 Steps For Success At Ol Stuga

To this day, we are still amazed at how many fun stories we find in each new destination. A good example of this is Ol Stuga, in Lindsborg, Kansas. From the outside, it looks like just another bar and grill type place. Even the name, which is Swedish for Ale House, suggests that it is merely another tavern. It’s the stories found inside that make this place unique. We dropped by and learned that this long-standing business has found the 4 steps for success.

We want to thank Visit Lindsborg and Öl Stuga for their hospitality. Rest assured all opinions are our own. Having the same owner, for over 40 years, has been a large part of the recipe for success at this hometown hangout. When 27-year old Mark Lysell purchased the bar, he didn’t realize what all was required to run this type of business. Learning on the fly, he embraced the local college as a resource for employees, as well as customers. He still helps raise money for an annual cookout for the college’s senior class. Even this is done in an unusual way. People are encouraged to put a thumbtack through a dollar bill, and then wrap it around their wallet. When they toss it at the ceiling, it will stick, and the wallet will fall back to the ground. It may take a few tries, but that just makes it more entertaining for the rest of the customers. How many times have you walked into an establishment and seen a picture of a local celebrity? You may have even seen a photo of a national celebrity hamming it up with the owner and staff. As we were looking around Ol Stuga, we found evidence of a visit from former Soviet leader Mikhail Gorbachev. This all stems from a decision by 7-time World Chess Champion, Anatoly Karpov’s decision to set up his first U.S. chess school in Lindsborg. The story goes that he was looking for a peaceful place to train for a match, and this Kansas town was suggested by a friend. Fast forward a few years, and we find that Gorbachev was in town to promote Chess for Peace. After a day filled with public events, the former leader wanted to head out on the town for a drink, which led him to this location. As they say, the rest is history. 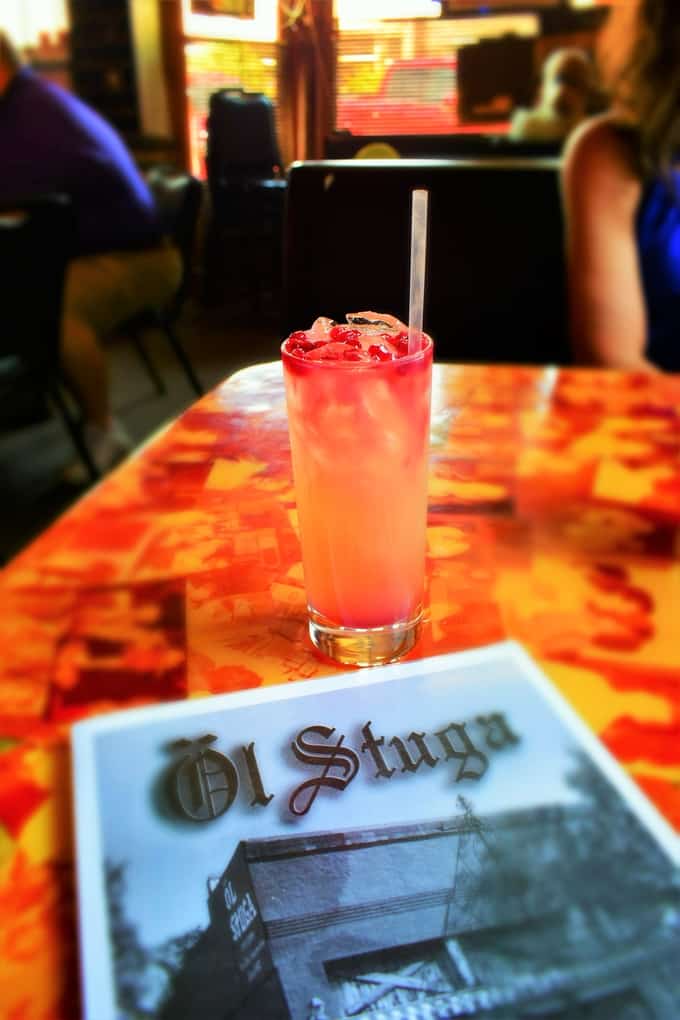 When Mark Lysell purchased the bar, it was customary for most establishments to serve up one or two brands of beer. These days, with all of the craft beers and micro-breweries, it’s not unusual to see a long line of taps. Ol Stuga has embraced this a little, by offering up a half dozen varieties of brews, as well as a fully stocked liquor list. Not being beer fans, we opted to sample one of their creative cocktails. At the suggestion of our server, we ordered up a Lindsborg Lemonade. This citrus-based drink had a deliciously refreshing flavor and an appealing presence. The addition of Swedish vodka gives it a hometown connection. Sometimes a simple action can blow up, in a good way. Brent Nelson was a regular customer at Ol Stuga. One day he was uncertain about what he wanted for lunch, so Lysell made him a sandwich that would rise to national recognition. It starts simply enough, with a Polish sausage on a bun. The addition of smoky cheddar and hot pepper cheeses, onions, and barbecue sauce takes this basic dish to a new level. How did Brent feel about this new creation? He began ordering it every day. When it gained national recognition, on Good Morning America’s Best Bite Challenge: College Edition, it was time to give it a name. What would be more appropriate than “The Brent Nelson’, in honor of the inspiration for its creation? 4 Steps for Success in Action

Wow! Little did we know that we would be walking into such a memorable stop. This was another reminder that you can never judge a book by its cover or business by its exterior. To truly “Visit Like a Local” you have to go where the locals go. Don’t be afraid to explore the small stops, as you may be pleasantly surprised at the stories you will find inside. (Check out the unique coffee shop we found in Lindsborg.)Where are some of the best places you have uncovered while exploring our big blue marble?