360 Degrees of Animals at Philadelphia Zoo

360 Degrees of Animals at Philadelphia Zoo

What would you do if you saw a lion overhead? It seems like zoos are finding new ways to engage their visitors with the exhibits. Some use wide open expanses to simulate the natural environments of the animals that inhabit them. Others offer feeding and interactive experiences for their guests. The Philadelphia Zoo decided to take their animal exhibit a step higher than others. We were both looking forward to the opportunity to visit the first zoo in the United States. It is so old, that it’s opening was postponed due to the Civil War. When it finally began admitting guests, the admission cost was a quarter. For that high price (in those days) visitors had the chance to view about 1000 animals. Not too bad for those days. The Philadelphia Zoo has had a lot of firsts. It was the first U.S. zoo to have a successful orangutan birth, as well as chimpanzee, and cheetahs. The zoo has actually developed a reputation for breeding success with animals that have been found difficult to breed in captivity. Philadelphia Zoo was the first to introduce flamingos in captivity. They developed the innovative feeding programs that helped maintain the bright coloring that visitors have come to expect. The zoo was also a key to the prevention of the extinction of the Micronesian Kingfisher. This rare bird was threatened by the introduction of a non-native snake species on Guam. The history of the Philadelphia Zoo certainly points to an establishment driven to assist in the preservation of all species. Over time the Philadelphia Zoo has grown, but not by a lot. These days the number of animals has increased to about 1300. This includes 15 of the most endangered species, which they work to breed. Of course, this type of work costs money, so they have to balance their desires to replenish species, with the needs to draw in paying crowds. Introducing Zoo360. The U.S. zoo known for it’s firsts has done it again. A network of overhead trails allow animals to traverse around and above the zoo grounds. This meant that we not only had to watch around us for animals, but also overhead. I have to admit it was quite thrilling when we did see some. Our first experience was with a mother lemur who had her baby in tow. We knew going in that this specific feature had been installed, and the crowds quickly signaled an area where a  trail was being occupied. Staying Grounded at the Philadelphia Zoo

Now some of these new trails are a little easier to observe. The meerkats exhibit feature an above ground tunnel of sorts. They can travel through the tracts to various stations, and back inside if they choose. We can still remember when meerkats first exploded in popularity after a certain Disney movie. Amazingly this popularity has remained today. This is just fine with us, as we like to see zoos getting the visitors they need to succeed. From it’s early days the zoo has had a Victorian garden theme, and that carries through to this day. It is also apparent in the architecture. As we wandered through the Philadelphia Zoo we noticed a higher number of resting areas, as well as eating establishments. Now we have been to a good number of zoos and wildlife parks, and this one certainly exceeded the others in refreshment opportunities. All of these break areas help slow down visitor’s pace, so they spend more time enjoying the exhibits. Something we don’t find in many of the zoos we visit is an open air wine and beer garden. The Watering Hole is the Philadelphia Zoo’s newest dining option. The brightly colored seating is complimented by vivid murals and eclectic art pieces lining the patio are. It’s a fun place to take a short break over a cold drink and small bites. The zoo has a few fun distractions, when you need a break from animal watching. They have the standards you find at most every other zoo. A carousel holds 30 various rain forest creatures for kids of all ages to ride. They also have pony rides, as well as a draft horse. I know that these are nothing special to most zoo aficionados, but what about a hot air balloon ride? When weather permits, guests can pay to rise 400 feet above the zoo for panoramic views of Philadelphia. Perhaps you’d prefer a ride in one of their swan paddle boats. Groups of two or three can rent a boat, and paddle around Bird Lake. We had taken a good rest, and now it was time to get back to the animals. It was great timing, as we were approaching Big Cat Falls. This lushly planted area is home to a variety of endangered big cats from around the globe. Like many guests, we were curious how the cats handle the cold Philadelphia winters. We discovered that most have no issue with the cold. The zoo still provides “hot rocks” for t some of their more temperate occupants. These artificial rocks stay warm all winter, and provide an outdoor option on cold days. Of course, on a hot summer day a big pool of water is what some are looking for. Even the big cats get an overhead trail. The idea is that they take turns, so that each species will be stimulated from smelling the previous occupants. During our visit it was the lion’s turn to use the trail. We happened upon one lioness that was intently watching the crowds passing below. It was entertaining to watch her attention shift from person to person. A child’s squeal would capture her gaze, as the crowd attempted to guess what she was thinking. This was certainly a level of involvement that most visitors do not engage in at other zoos. The Philadelphia Zoo has succeeded in creating an experience that benefits the guests as much as the animals. 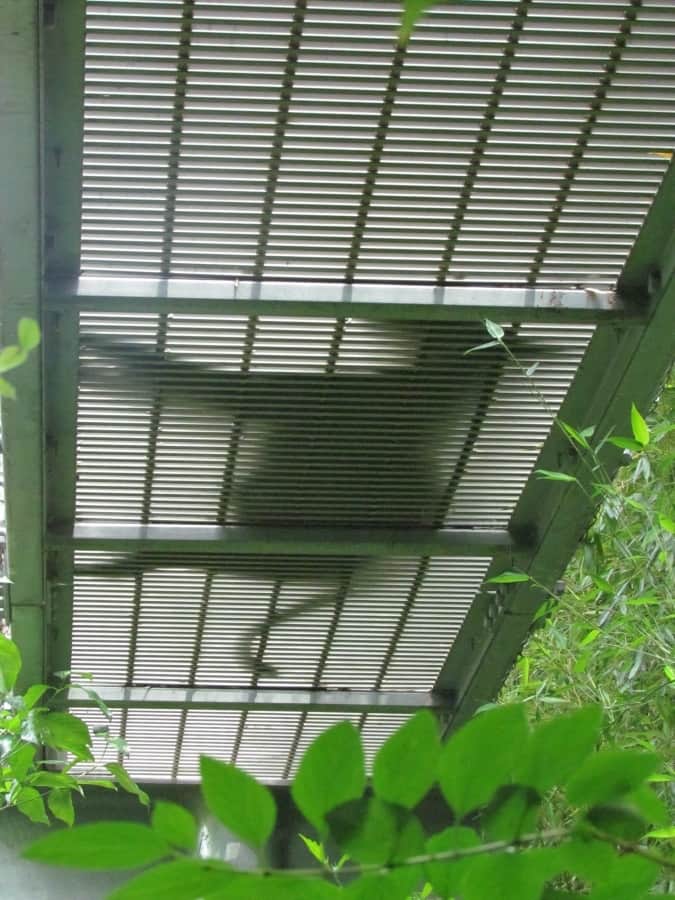 The morning had given way to afternoon, which was also passing quickly. As the heat of the day grew, we noticed the activity levels had peaked. This was true not only for many of the animals, but also the zoo visitors. We realized this was our cue to return to the outside world. As with our other zoo visits, we took with us lots of pictures and memories of our day. The one difference was that many of our pictures were focused overhead this time. Have you ever visited the Philadelphia Zoo? What animals did you see in the overhead trails?