Who’s Viewing Who? A Visit To Sea Life Kansas City

Who’s Viewing Who? A Visit To Sea Life Kansas City

It is nice to know that Kansas City has a lot of attraction options that can be enjoyed during any weather. On a cold winter day we made a visit to Sea Life at Crown Center. This marine adventure zone offers visitors an opportunity to immerse themselves in the world of oceans, rivers, and lakes. What we found was much larger than we expected, and included lots of interesting exhibits. Let’s take a closer look.

We want to thank Sea Life Kansas City for their hospitality. Rest assured that all opinions are our own. 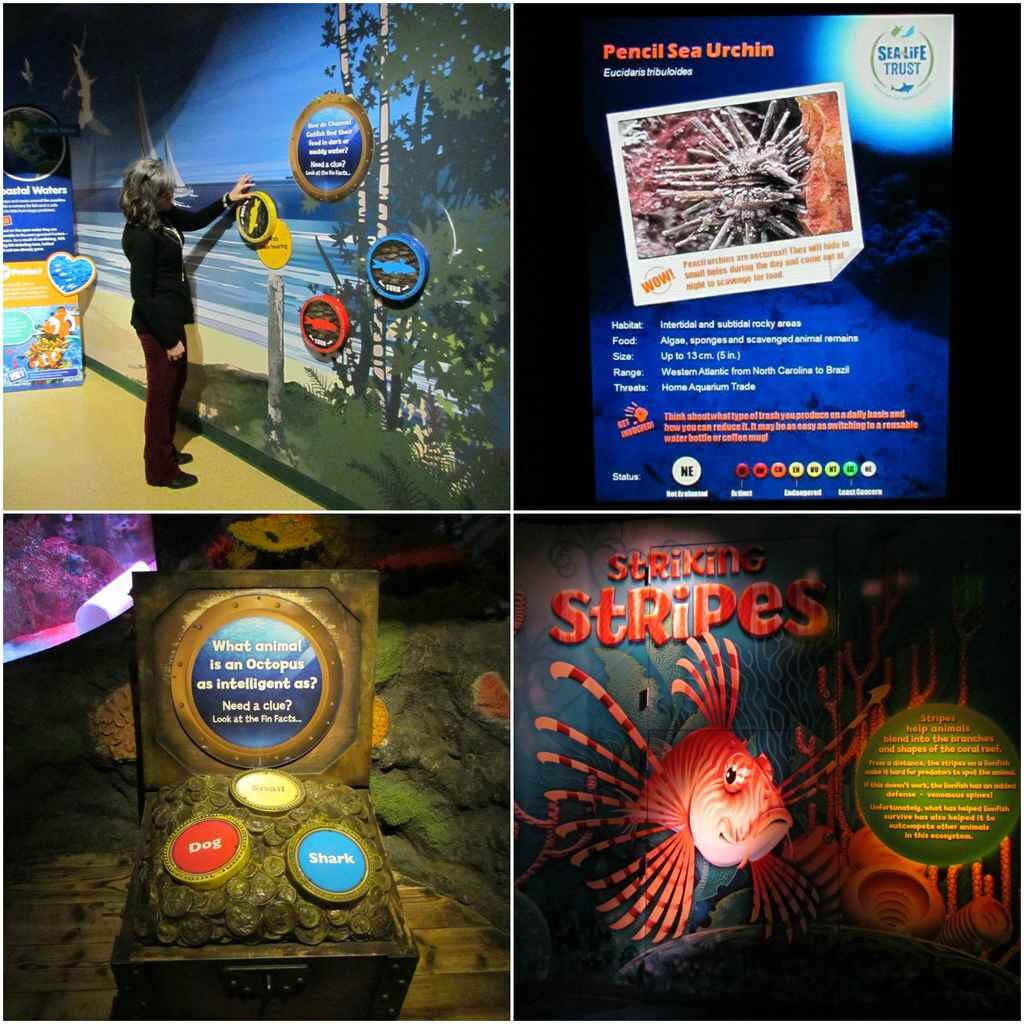 One of the key drivers at Sea Life is the desire to increase awareness of the waterways and the species that inhabit them. Throughout the center we found lots of educational tools. Walls were decorated with murals that explained facts about the creatures in nearby displays. Questions were posed that required further investigation of the nearby areas. Video displays give detailed information about specific species on exhibit. All of these displays helped foster a closer tie to the various creatures that we would see. It also let us know what we should be looking for, since sometimes you have to closely examine a tank to spot everything.

It’s Okay To Be Touchy

Not too far into the center we came upon a touch tank filled with an assortment of starfish. The area was brimming with activity and giggles, as kids of all ages experienced the thrill of making contact with one of the species. A staff member was on hand to assist with directions and information about the tank residents. This is a popular exhibit, and it is amazing to see the wide range of colors found in this Rockpool.

While we were examining everything in the pool, one of the staff members asked if we wanted to see something special. They brought up a Sea Cowrie, which is kin to the snail. This unique salt water dweller has a mantle that hides their iridescent shell from view. Once the mantle is gently pushed back, the much prized shell is visible. Cowrie shells have been collected for many ages, and were even used for currency in some parts of the world. This creature is another example of the unexpected wonders that can be found around our globe. Sea Life has a nice collection of displays that showcase the coral reefs from around the world. Here we found lots of colorful fish, including the familiar clownfish. It is calming to just watch them dart in and out of their protective spaces among the coral and anemones.

Nearby we found more displays that are filled with brightly colored anemones and starfish. As we examined the space, we were surprised by a well camouflaged octopus. We watched as it situated itself back into its hiding spot, before moving on to the next tank. Here we found a collection of seahorses bobbing in the current. Periodically one would loosen its grip and find itself floating around the tank in search of a new anchor. A Guest From Down Under

We entered a room that offered a chance to view a real life dragon. The Sea Dragon is kin to the seahorse, and hails from Australian waters. A large tank offers views of the slow moving oddity. Its leaf like appendages are reminiscent of kelp, and help it blend into its surroundings. We watched them drift around their tank, and noticed they do not have the same type of tail as seahorses, so they cannot latch onto plants.

The room containing the sea dragons has a couple of interactive video screens. One allows guests to race to see how well they can feed a sea dragon. The other teaches visitors to dance like a drifting dragon, as demonstrated by Crystal. I would have danced as well, but someone has to do the filming. 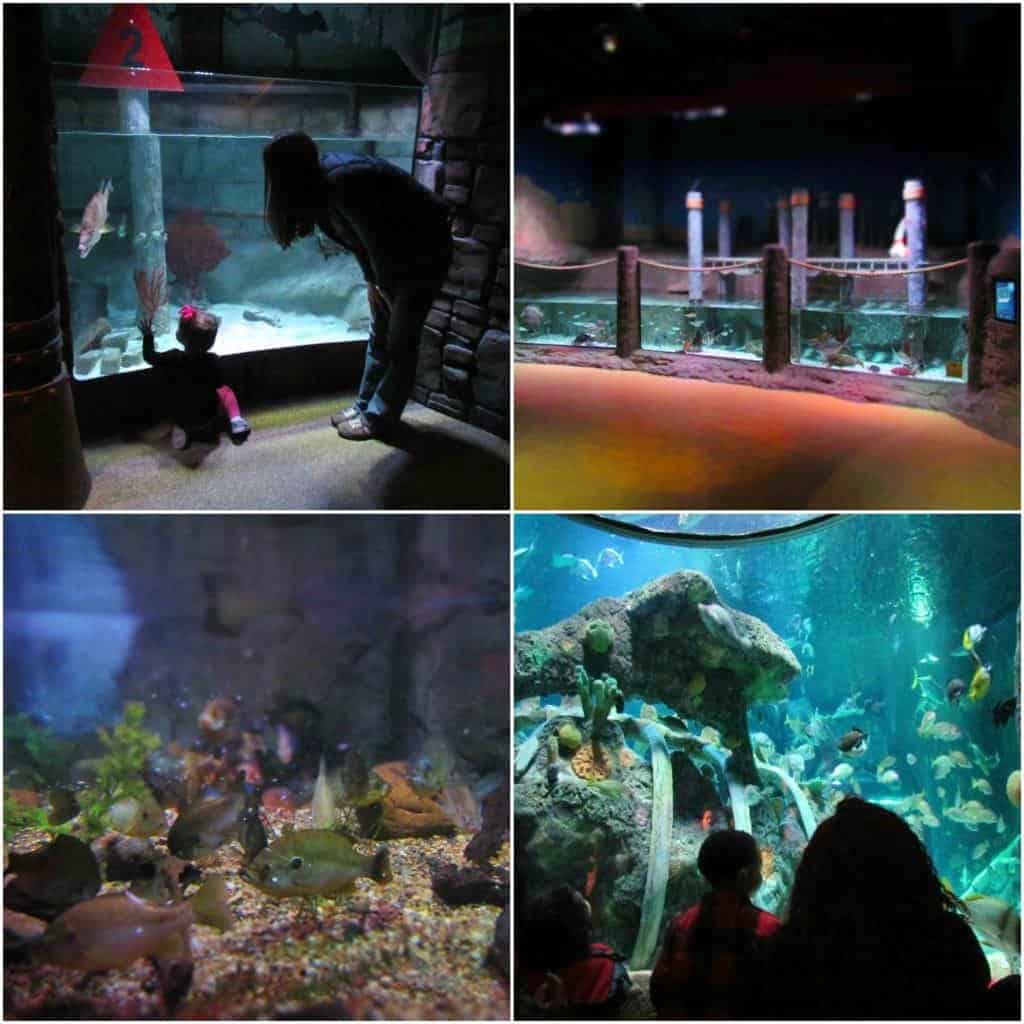 While there are some tanks that are placed at eye level, many are situated to allow children some of the best vantage points. This clearly makes the attraction more appealing for families. We saw lots of parents kneeling to describe to their kids the creatures inhabiting a display. This attention to detail was not lost on us.

Another way Sea Life engages visitors is to give them opportunities to get in the middle of the action. A little stooping may be required, (For us big kids) but the results are well worth it. This fish eye view of the watery surroundings adds another level of interaction to a visit. For those of us with good imaginations, it’s almost like scuba diving or snorkeling without getting wet.

No Peanut Butter, But Plenty Of Jellies

We stumbled upon a good sized tank filled with jellyfish. We enjoy watching them dance through the water, which can be mesmerizing. A group of buttons nearby allow visitors to choose the lighting from red, blue or green. While each color highlights the jellies in a different way, I was particular to the red coloring.

Not So Public Schools

In many of the tanks we found schools of fish. While a different species will attempt to join the mass, they are quite often ignored by the group. Shoaling is a common trait for smaller species, which use the safety of numbers as a defense. While they were not in the same level of danger as in the wild, this ingrained trait was entertaining to observe.

As we were approaching the end of the exhibits, we came to one of the largest and most entrancing. A huge walk-thru tank is filled with a variety of fish, turtles, rays, and sharks. Here we could watch them drift by in the distance or float overhead. We watched as a large ray would glide by us seemingly flying through the water. This is an area that one can easily lose track of time, as there is so much activity all around.

The final exhibit area is also the newest. Doodle Reef is truly designed for kids of all ages. (I even had to test it out for the sake of the article!) Here we found an assortment of stations that allow guests to pick a reef fish species, and color it as they wish. Similar to using Paint on the computer, you can stamp, draw, paint and even erase when needed. After you complete your new “species”, you can release it into the wild. On one wall of the room is a huge video reef, where you can spot your new creation swimming around with the other interestingly colored specimens. This exhibit was a huge hit with the kids, and I enjoyed it quite a bit, as well. Once my pet was free to roam the sea, we bid it farewell and exited through the gift shop. Our visit to this tropical realm had made us forget about just how cold it was during winter in Kansas City. Have you visited Sea Life? What creature did you create in the Doodle Reef?