What We Learned At The Osawatomie Museum Complex

What We Learned At The Osawatomie Museum Complex

A day trip to Osawatomie, Kansas was less than an hour drive from Kansas City, but landed us in a different era. This itinerary was designed to showcase a variety of historic sites in Miami County. The Osawatomie Museum Complex, located in the downtown, was one of our stops. This locally oriented twin museum tells the story of the city, since its start in 1854. Our main purpose for visiting was to see their unique train museum section. Of course, we wanted to get a little background on the area first. 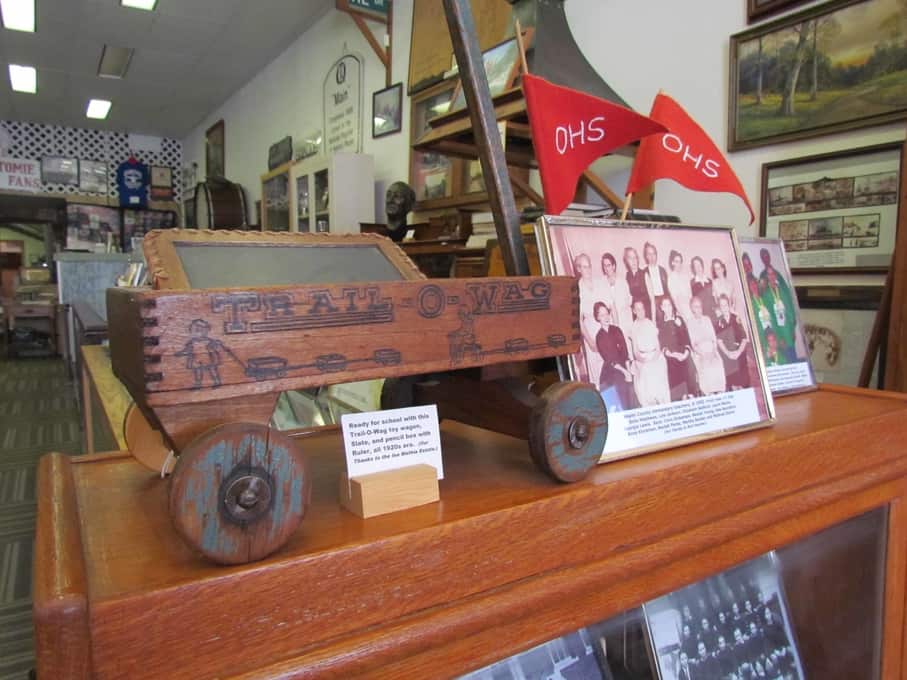 What’s In a Name?

While we both have heard the name of Osawatomie since our younger years, we never really knew much about this nearby city. Our first lesson came from the staff member who explained the origin of the city’s name. It is a hybrid combination of the Osage and Potawatomi Indian tribes. The city was settled by the Emigrant’s Aid Society. This New England based group was responsible for settling many new towns in Kansas territory during the years leading up to the Civil War. These abolitionists were hoping to tip the scale in bringing Kansas into the union as a free state. Almost immediately, most of these new startup communities would be thrown into the violence that was building along the state border. The city of Osawatomie was home to the historical figure, John Brown. We will detail more about him in another stop to be covered later. 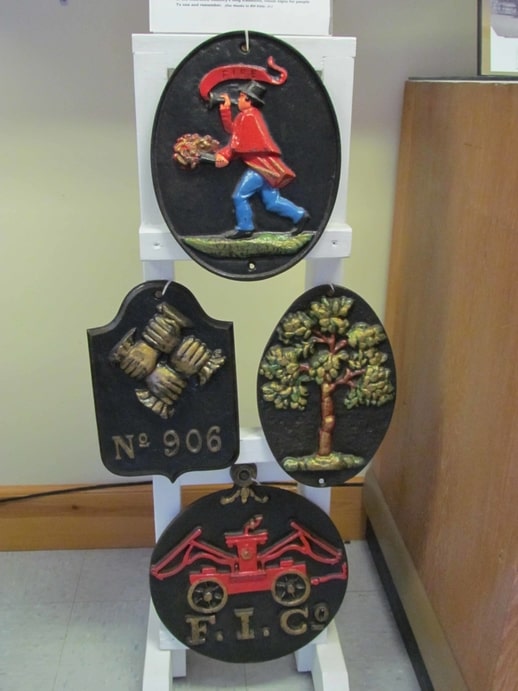 As we made our way back to the train section we passed through a room filled with military and first responder memorabilia. There we noticed something we were not familiar with. A small display of fire marks hung on a stand. These cast iron plaques were used in the 1700’s and 1800’s. Their origin comes from England where they were used to designate buildings that were insured. Volunteer firefighters would not fight a fire if the marks were not present. These signs would “insure” that the firefighters would receive a reward for fighting the fire. 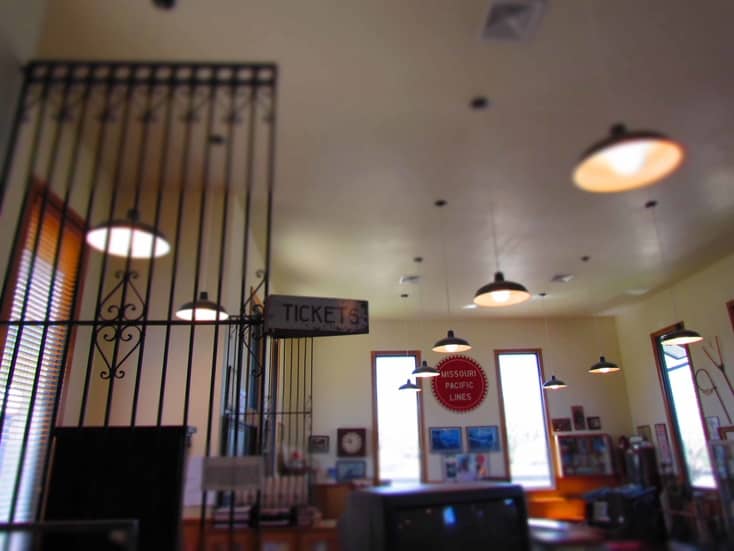 In 1879, the railroad came to Osawatomie. The museum has constructed a reproduction of the original depot that once served travelers coming to the city. This addition helped boost the population to over 4,000 by 1910. The railroad would eventually close its rail service for travelers once the highway system had matured. The city has seen two other notable visitors. In 1910, President Roosevelt gave his New Nationalism speech while in town. President Obama stopped by Osawatomie in 2011 to reconfirm many of the principals from Roosevelt’s speech. While we were having lunch, we overheard some of the locals discussing this most recent appearance.

While passenger service may no longer be part of the menu offered by the railroad here, they still have a significant presence in the city. A major switching operation is located in the area. As we made our way through the replica depot, we saw many artifacts that would have been common in the heyday of rail travel. One piece that caught my attention was the old pull cart that would have been used to handle luggage. These carts reminded me of the ones used by Mormons crossing the plains during the Westward Migration. 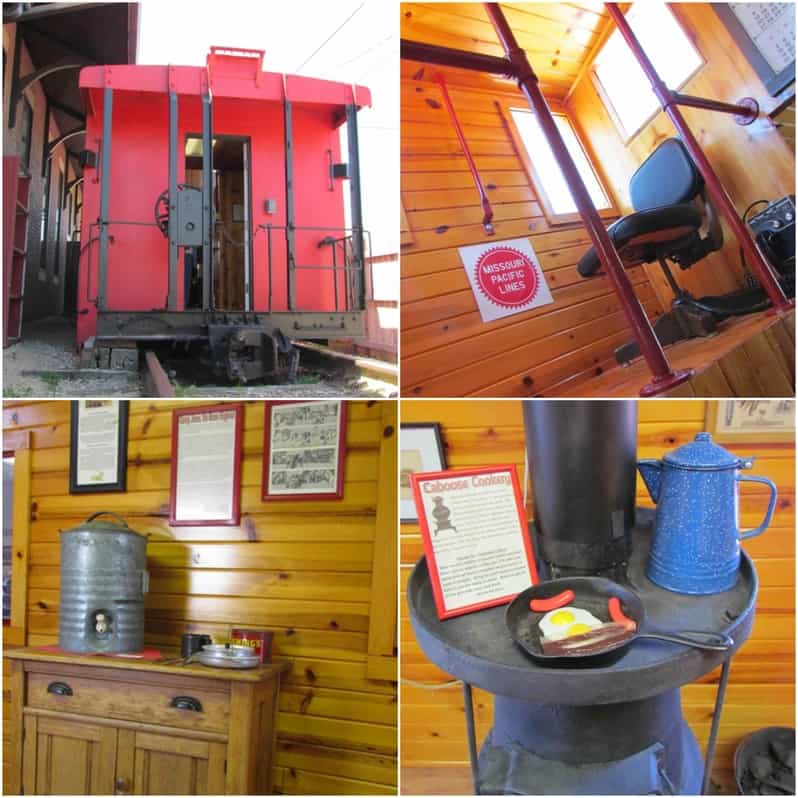 Hop on the Caboose

Behind the museum they have an old wooden caboose that has been repurposed for education. The inside is refurbished for educational purposes. Along the walls are lots of informational placards telling about life as a conductor. We even learned about the use of a wooden heating stove for cooking. I guess we never thought of them having a dual purpose.

A set of drawers are located under an elevated seating area. These drawers hold educational materials about the railroad. The staff member who was showing us around pointed out that these are a big hit with kids. Inside one drawer was information about Date Nails. We had never heard of these and asked for more details. Evidently, these small spikes have a date impressed in the head. This usually denotes the year that the track was laid or last replaced. They can also be used to note what chemical was used for treatment on the rail bed. We were told that these are highly prized by collectors and can still be found along rail lines. Another interesting tidbit we learned. 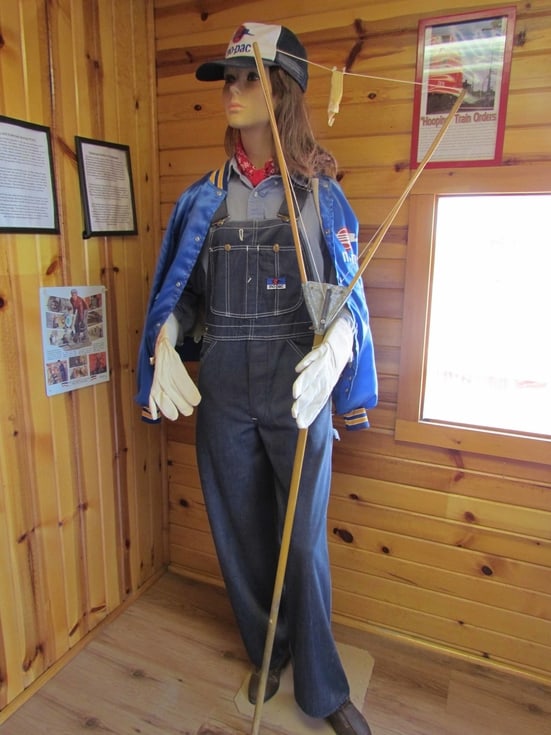 War Comes To the Railroad

At the back of the caboose is a display of how the conductors used to get new orders as they traveled. Prior to radio communication, they would use message hoops. The conductor would grab a wooden hoop from the station worker as the train passed by. This would have the message attached, which the conductor would retrieve and then toss out the hoop. The station worker would have to go find it. Before long a better tool was devised, and looked like a long fork. This stayed on the train, so the land based staff didn’t have to spend time searching for hoops. We also learned that during WWII the railroad employed a large number of women to operate their system. Much like the other industries, the lack of male workers created a vacuum that women stepped up and filled. With our heads now spinning with all of this new knowledge, we bid our goodbyes to the staff and headed out to see more of Osawatomie. Now doesn’t this make you want to do a little day tripping yourself?

If you liked this article why not share it with friends! 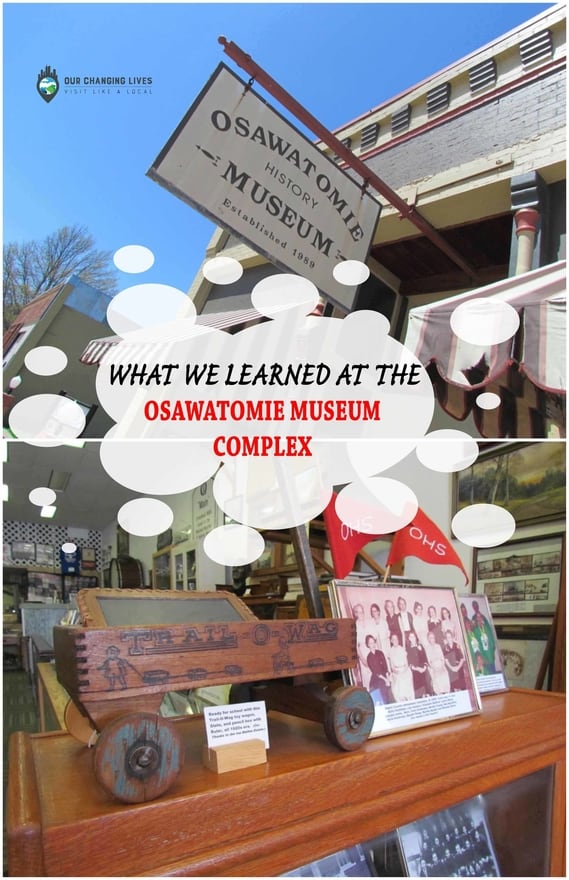