In 1984, the Kansas Museum of History was opened in Topeka, by the Kansas Historical Society. This 30,000 square foot building sits on 80 acres in the northwest section of the city. The museum hosts traveling exhibits, as well as the permanent displays. There are 4 walking trails on the property to allow for views of the native grasslands and waterways. We enjoy our visits to this site in our home state. It allows us a chance to walk through time and learn about the people who came before us.

The main gallery features permanent exhibits in chronological order. It begins with a look at the Native American tribes who populated the plains. We found an overview of each of the tribes who lived or traveled through the Kansas region. A lodge house, as well as a teepee, show visitors how these early residents lived. The transition of the area begins with the introduction of trappers, and before long the westward expansion is in full swing. 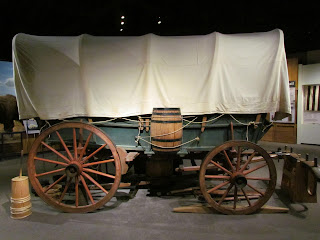 The placards tell of the hardships faced, and are presented in the words of real life travelers. The displays include many of the items that were brought west. A storefront, with the goods needed to make such a journey, and a wagon that would have been used to carry a family, are also on display. As the territory became settled, there was talk of statehood. 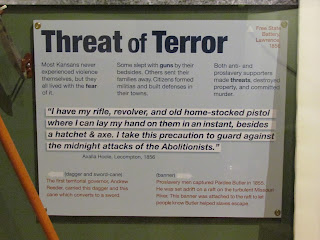 The United Sates was on the verge of a civil war, and the introduction of Kansas as a free state fueled the fire. “Bloody Kansas” is a term synonymous with the struggle that occurred in the area at that time. John Brown, and William Quantrill were a couple of the key players in the violent path to statehood. Displays include opinions from free-staters, abolitionists, slave holders, as well as the Native Americans and slaves. The Kansas Museum of History has civil war displays that include information on Quantrill’s raid on Lawrence, which left 150 people dead and the city reduced to ashes. There is also a display on General George Custer who served in the Kansas territory during the war.

The timeline moves forward to the settling of the area, and the growth of commerce that the introduction of the railways brought. There are displays on home building, and furnishings. A two story home interior shows how people lived in the late 1800’s. A four car locomotive is featured, along with display on various items necessary to maintaining a functioning railroad line. The displays continue through the beginning of the 20th century, and include the automobile and aviation industries.

Wrapping Up Our Visit

A replica of a 1950’s era diner is the main feature of a display on restaurants from across the state. As you move toward the end of the display, you enter an area focused on the last half of the 20th century. The displays are separated by decade, and include many of the iconic items that we fondly remember from our youth. The Kansas Museum of History has a gift shop, and a children’s play area located near the entrance. Why not make plans for a day-trip to Topeka next weekend? It’s always fun to hit the open road.