Two Countries in One Day in St. Maarten

Two Countries in One Day in St. Maarten

The island of St. Maarten/St. Martin is home to two different sets of residents. On one side you have the Dutch region, while the other half is French. The island received its name from Christopher Columbus during his second voyage. While it was claimed in the name of Spain, they considered it a low priority. On the other hand, the French and Dutch were both eager to possess it, and in the mid-1600’s signed a treaty splitting the island between them. A visit to this small island allows you to visit two countries in one day. 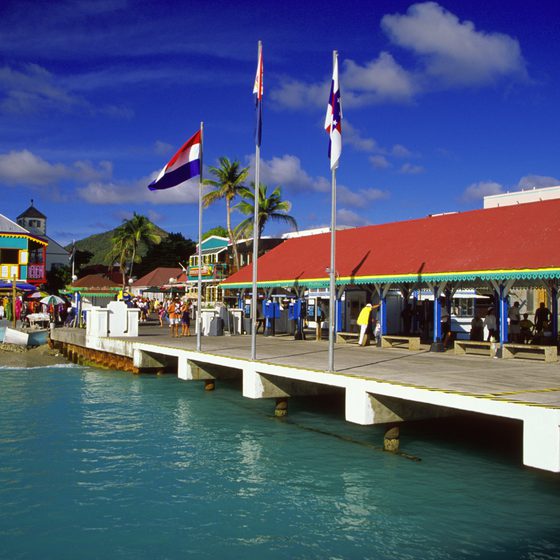 On a recent cruise, our ship docked in Phillipsburg, which is the capitol city of the Dutch side. Once on shore we mingled with the other tourists at the dockside shops. Here we had our first taste of Guavaberry, which is the national liquor.  We savored our sweet and tart drinks, as we wandered the kiosks. Soon it was time to head to our gathering area to await our tour of the island. 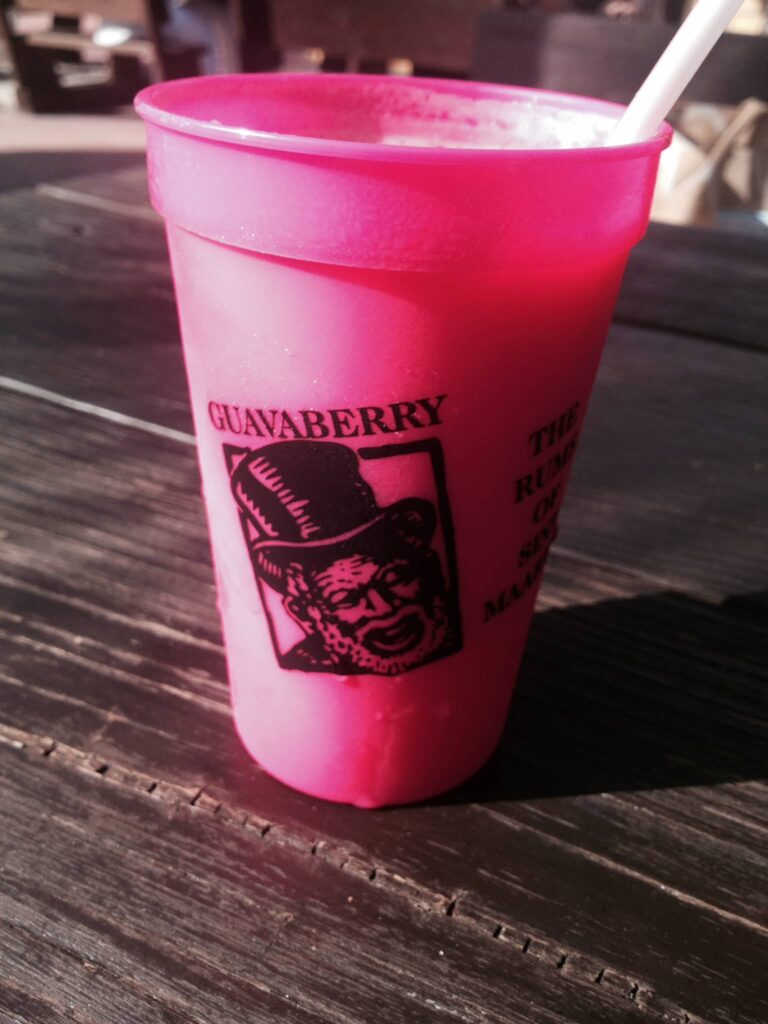 Soon we were loaded on our bus, and we headed off around the island. The bus passed through the Dutch countryside, and soon we found ourselves at the border crossing into the French side. The driver stopped for us to take pictures, but there were no security checks involved. Soon we continued on our way to Marigot, which is the other capitol. 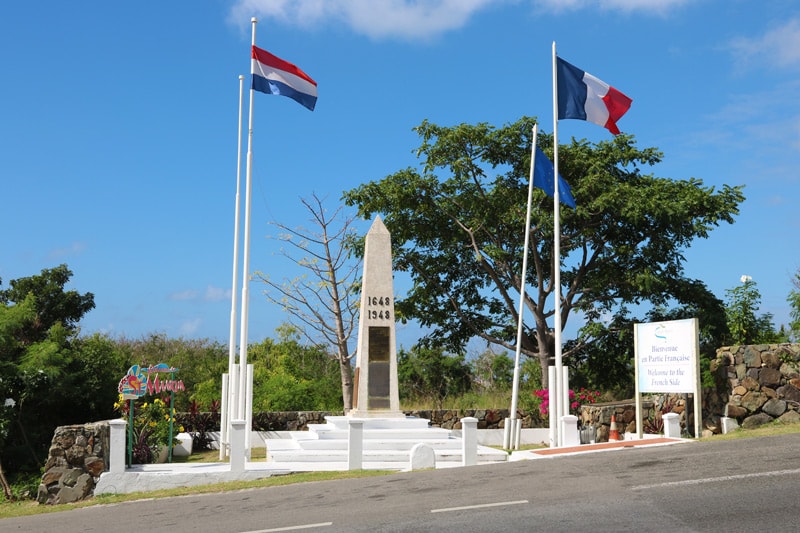 Our driver was inspiring as he navigated the streets. Amazingly they have no traffic signals on the island, and driving is best left to the fearless. We arrived in Marigot, and the bus parked near a vendor’s plaza. Here locals displayed their wares in makeshift tents and booths. Tourists wandered the aisles looking for treasures to remember their trip. It did not take long to realize that much of the goods were repeated over and over. 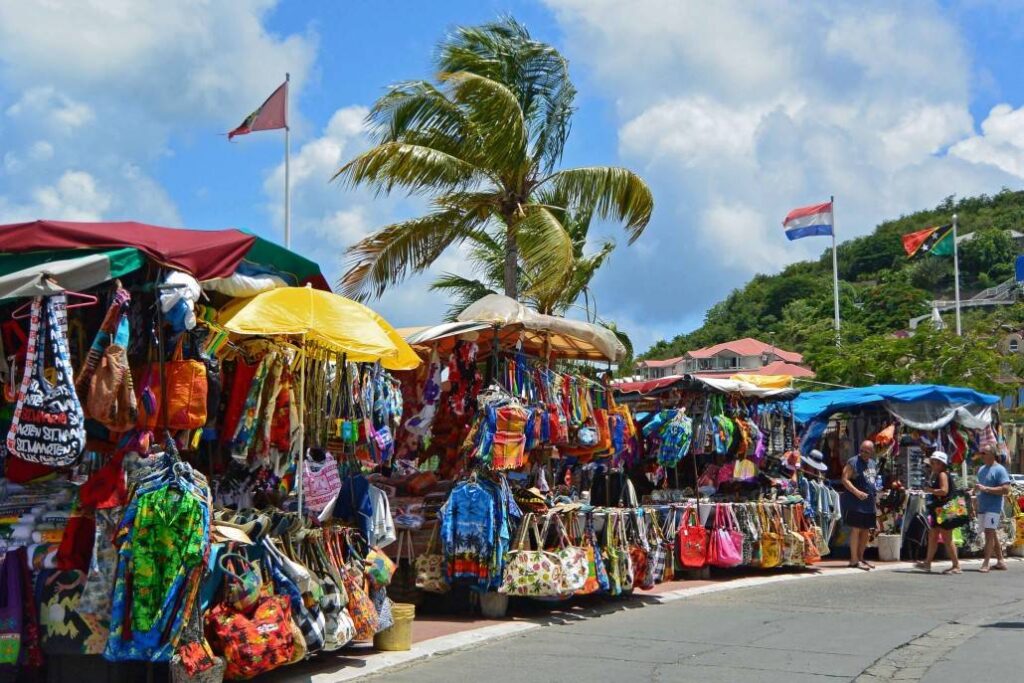 We separated from the crowd and made our way down the block to Sarafina’s Bakery. By doing some research before our trip, I knew that this place was an opportunity to get some authentic French pastries. We made our selections, and headed back to the waterfront to enjoy our treats. 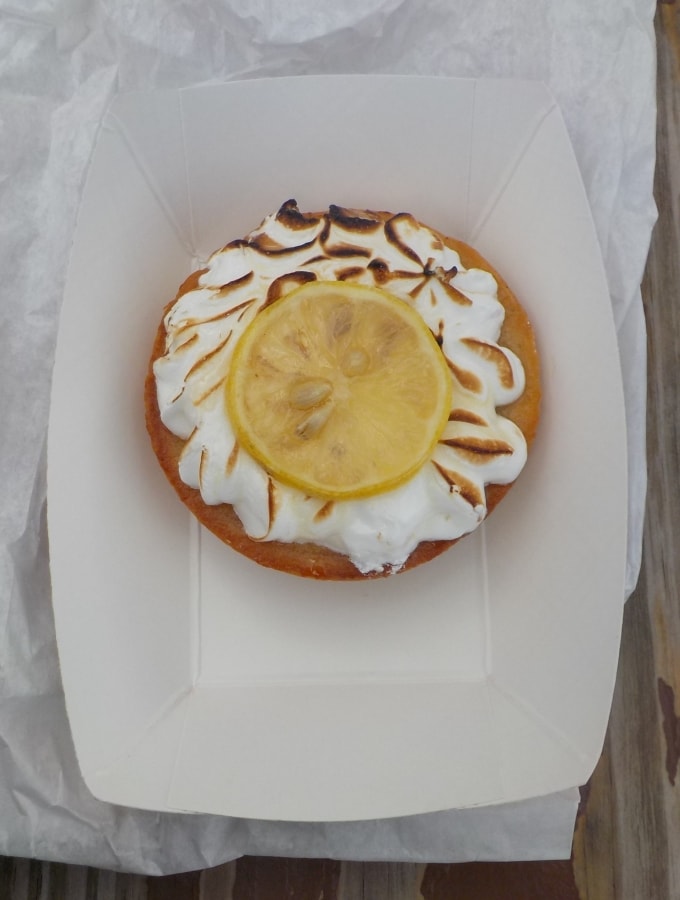 We had purchased a quiche, a filled croissant, and this exquisite Lemon Torte. It was quite similar to a small version of a Lemon Meringue Pie, and made a perfect finish to our meal. With our hungers quenched, we returned to our duties as tourists, which is to pump money into the local economy. Back in the vendors market we found great deals on a pearl bracelet, a locally produced piece of mixed media art, and a baseball cap. Too soon it was time to return to our bus. We made one last view of the city, and the old fort that was built to protect the bay. 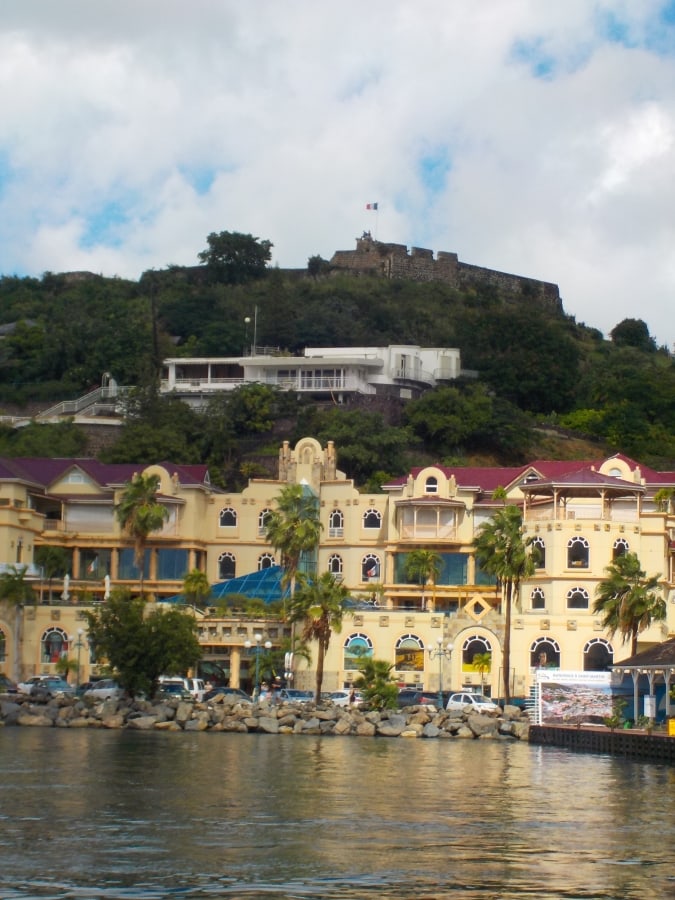 Soon we were traveling again, with the driver barking out sights as he navigated the hilly terrain. Another third of the way around the 13 square mile island, and we arrived at our next stop. We were looking forward to this relaxing portion of the tour on Orient Beach. We unloaded from the bus, and were handed rum drinks to get us started. I have to say that they certainly know a lot about getting relaxed. Next we were directed to our loungers located on the beach. Once situated, I headed off to the water, since that was my preference. I quickly found that the ocean swells were much more random in size at this location, and learned to watch what was behind me. 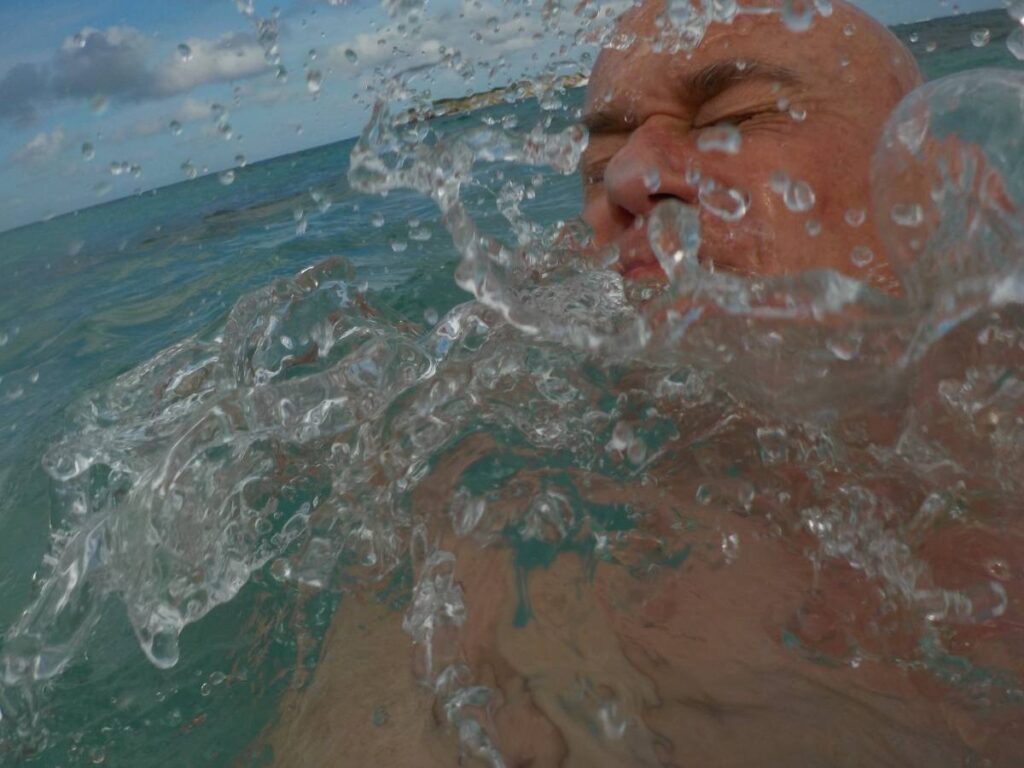 Crystal had made herself very comfortable, and watched me from the dryness of her chair. When we arrived we had been cautioned that since we were on the French side there may be occasional nudity. The key word we had heard was occasional. Evidently it has a different meaning in St. Maarten, since about 75% of the people were completely naked. Of course we chose not to join them, but we also didn’t let it bother us. After finishing her drink, Crystal decided to join me in the waves, which were not as warm as she would have preferred. 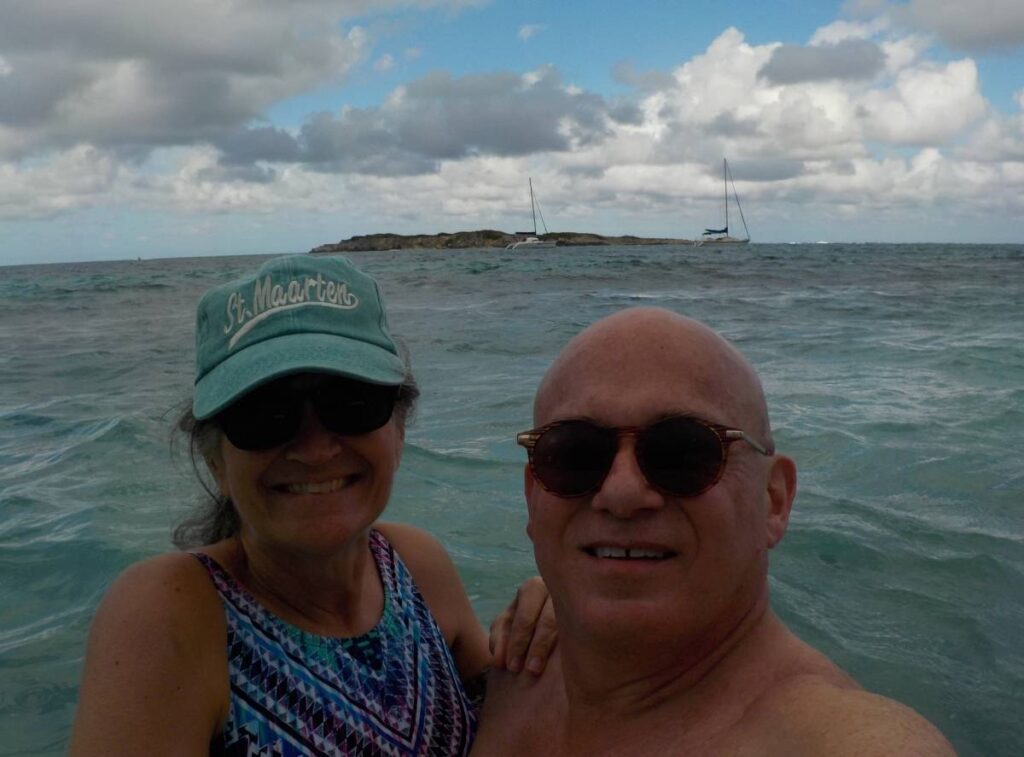 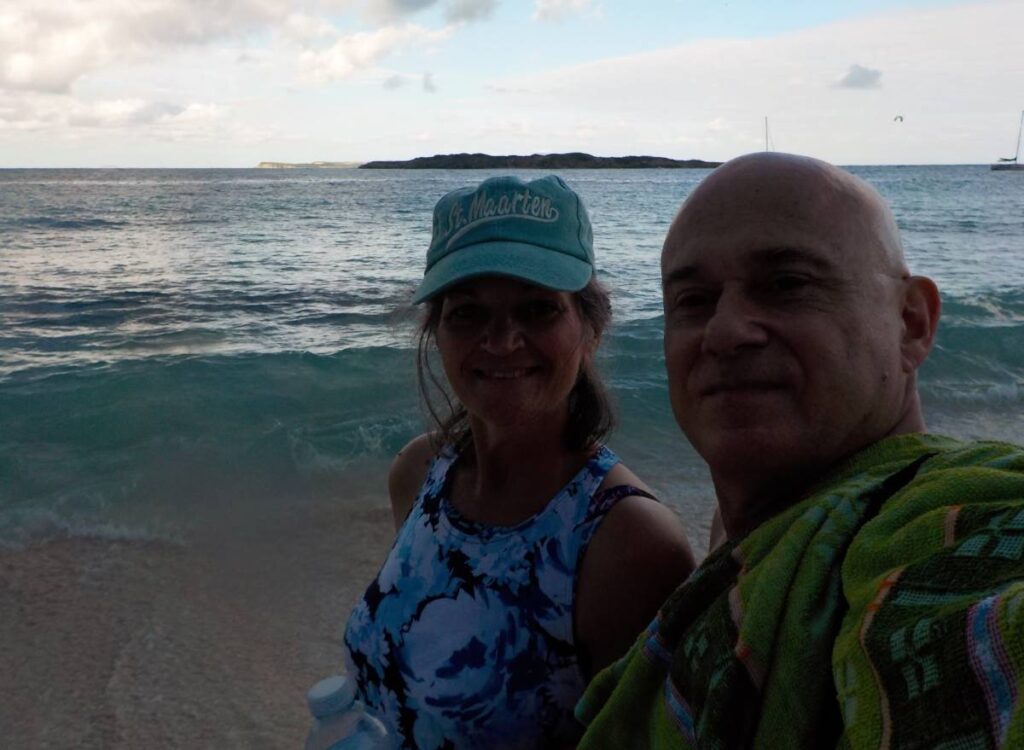 Back on board we prepared for the evening events. After changing, I grabbed the camera and headed up on deck to catch a final view of the islands as we sailed away. We had already left the harbor and were beginning our last leg of the journey home. 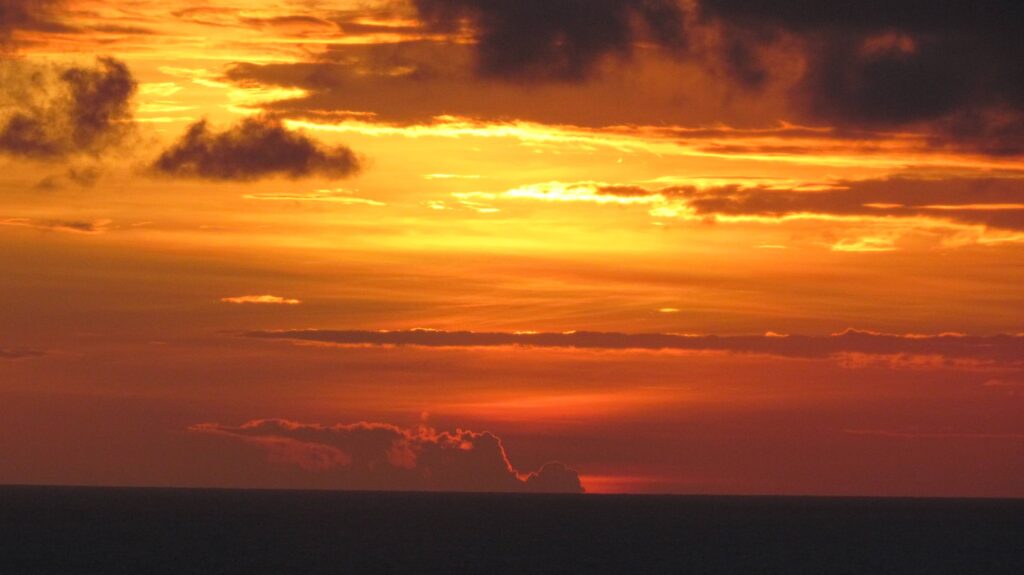 On St. Maarten, our final island adventure  was completed. We were preparing ourselves for two days at sea, on one of the largest cruise ships sailing. We could only imagine what wonders still awaited us. Of course, we also had plans to spend some of the time relaxing, but we just weren’t sure when we would squeeze it in. Perhaps we would lay by the pool and remember visiting two countries in one day.