Tanganyika Wildlife Park is not exactly what we think of when we hear the word zoo. Although visitors can have a zoo-like experience, they can also choose to dive deeper into the world of animals. The owners wanted to help guests gain a more personal interaction with the wonderful creatures, that the zoo cares for on a daily basis. Here you will find an opportunity to get up close, and personal with many species. The day we visited Tanganyika was cooler than expected. Fortunately, the sun was out in full force, and it tried to warm us up. The animals all seemed a little less phased by the chill in the air, and that was what was important. Now we have mentioned before how much we love zoos. To us they are an opportunity to observe creatures from around the globe, that under usual circumstances we would never see. When our research uncovered a park that actually allows visitors to interact closely with various species, well it sealed the deal that we would be visiting. The park was formed from the ideas of one man, Jim Fouts, who had a vision to preserve species from around the world. He started as a keeper at the local zoo in Wichita, where he would find his passion for animals.

He began his breeding program with birds from South America, and soon moved on to include African species, as well. Within 10 years, he became a leading importer of rare birds, and many zoos would come to him for assistance. In 1985, he bought the land which would eventually become Tanganyika Wildlife Park. By 2000, they were giving guided tours in their “backyard”. As more species were added to the collection, the number of visitors continued to climb. It was time to pull the trigger on building a world class park. In August of 2008, Tanganyika Wildlife Park officially opened for business. They had 15 exhibits, and hosted 3 interactive experiences. Over the past few years, they have grown to the 3rd largest animal collection in the State of Kansas. These days they feature 40 exhibits, and 9 interactive stations. The park is quite manageable, being about 1/6th of a mile across. The majority of the landscape is a fairly flat surface, so a good option for most everyone. One of the first exhibits you see upon entering is the nursery. In 2016, Tanganyika saw the birth of 21 cats, 2 giraffes, 4 kangaroo, 2 penguins, 17 primates, and over 20 other babies. Many of these are rare and endangered species, which will eventually wind up in zoos around the world. The work they do is helping to preserve some of the world’s endangered species.

Guests purchase wristbands that allow for a predetermined amount of encounters. Since Tanganyika receives no federal, state or local funds, these ticket purchases help cover the costs of caring for the animals in the park. One of the park’s first interactive exhibits was feeding giraffes. Even today, this is a very popular option. Children of all ages (Yes, even my age) have a chance to feed one of these beautiful creatures. During our visit this was quite the popular stop, and the giraffes seemed happy to see the crowd. Giraffes are one of my personal favorites, so I truly enjoyed the experience. 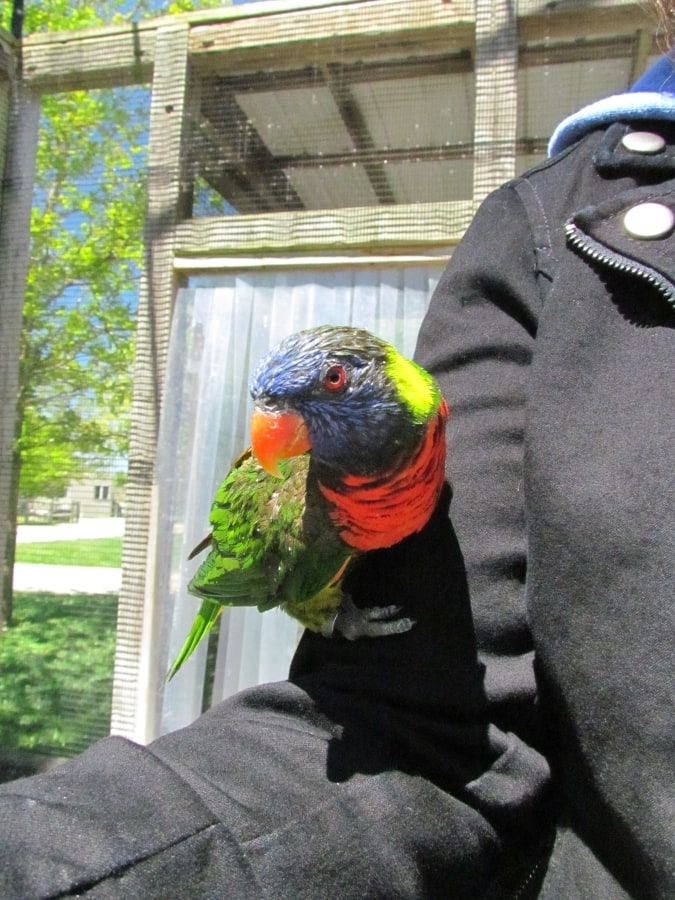 As we moved on through the park, it became apparent that the exhibits are set up to allow the best views for guests, while still maintaining the safety of the animals. In the primates area, we watched a park staff member lecture visitors about some of the species on display. Staff would try to answer all of the questions they heard from the public. This was an interaction we do not see at most large-scale zoos. It certainly makes the experience that much more personal for guests, and helps form a better appreciation for the various species. A collection of squawks signaled our approach to the Lorikeet area.

Our wristbands allowed access to feed these brightly hued creatures. Since I was on camera duty, Crystal became the star of the show. With nectar cup in hand, we moved into the enclosure. It didn’t take long for them to recognize a prime opportunity, and one came to rest on her hand. Of course, where there is food, there will be competition. Soon a second and third Lori arrived for a chance to feed. We aren’t sure how dominance is determined, but there was certainly a pecking order in place. (I know, bad pun.) The birds emptied the cup, and all but one returned to nearby branches. The straggler hung around to finish up the drops that had spilled on Crystal’s hand. 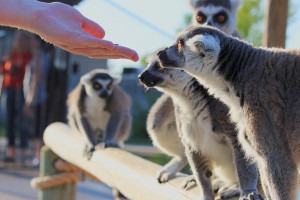 The most popular feeding experience is the Ring tailed Lemurs. We spotted them on a small island, and watched as some other park guests fed them. We knew this was an experience we could not pass up. Our wristbands allowed us to access this attraction, as well. When it was our turn, we shed the backpack and camera gear to head across the bridge, and meet these curious creatures. Staff instructed us to hold our hand out, and they placed a craisin in our palms. The lemurs had formed a line on an elevated wooden beam, and waited anxiously for the treat. You reach over and they take the fruit piece from your hand. One of them held onto my fingers for a while, and looked to me for another treat. Their fingers are so soft, and they are certainly fun to watch. This was definitely a highlight moment for both of us. We were creating a closer bond with the animals, and that is exactly the park’s goal.

There are other feeding stations to visit, but our itinerary change had unfortunately left us with limited time. As we walked back toward the front, we saw guests feeding bunnies, tortoises, and guinea pigs. There are also feeding machines available for treating alpacas, Nigerian Pygmy goats, and Koi fish. The date of our visit happened to match up to the exhibit improvements taking place with the Indian Rhino, and Pygmy Hippos. These are also on the list of animals that visitors can purchase access to feed. While we were disappointed to miss the opportunity, we could appreciate the desire for the park to do continuous improvement for the animals. Oh well, maybe on our next visit. For now we were on our way to the most exciting part of our visit. The park also offers a few experiences that surpass the others. While these do have a higher cost, they offer guests a once-in-a-lifetime experience. There were two “Behind the Scenes” activities that piqued our interest. The penguin experience offers a 45 minute tour, where you will learn about Africa’s only species of penguins. You will get the chance to feed them, and even walk away with a small painting made by the penguins. While this sounded like a really cool experience, the other one trumped it. Our choice was the chance to meet an Okapi. Now many have never even heard of this rare African hooved creature. These deer-like mammals are only found in a small pocket of tropical mountain forest located in Central Africa. They are as striking beautiful, as they are elusive, and were not even correctly classified until the early 1900’s. Considered extremely endangered, this was an opportunity neither of us could pass up. We met up with their handler, Robert Olmstead, who would be leading us on a personal tour. (Yes, there are some perks to being bloggers.) We started with Robert giving us a history lesson on the discovery of these magnificent beasts. Tanganyika has two of them, but they don’t mingle, since they are solitary animals in the wild. We were surprised to learn that they are a relative of the giraffe, but later it would become quite apparent. After this brief history lesson, we started our walk to the holding pens. As we crossed through the middle of the park, we passed the giraffe enclosure. The day was waning, and the animals had gathered to prepare for their night inside. Robert took this opportunity to introduce us to these curious creatures, who took turns checking us out, as well. 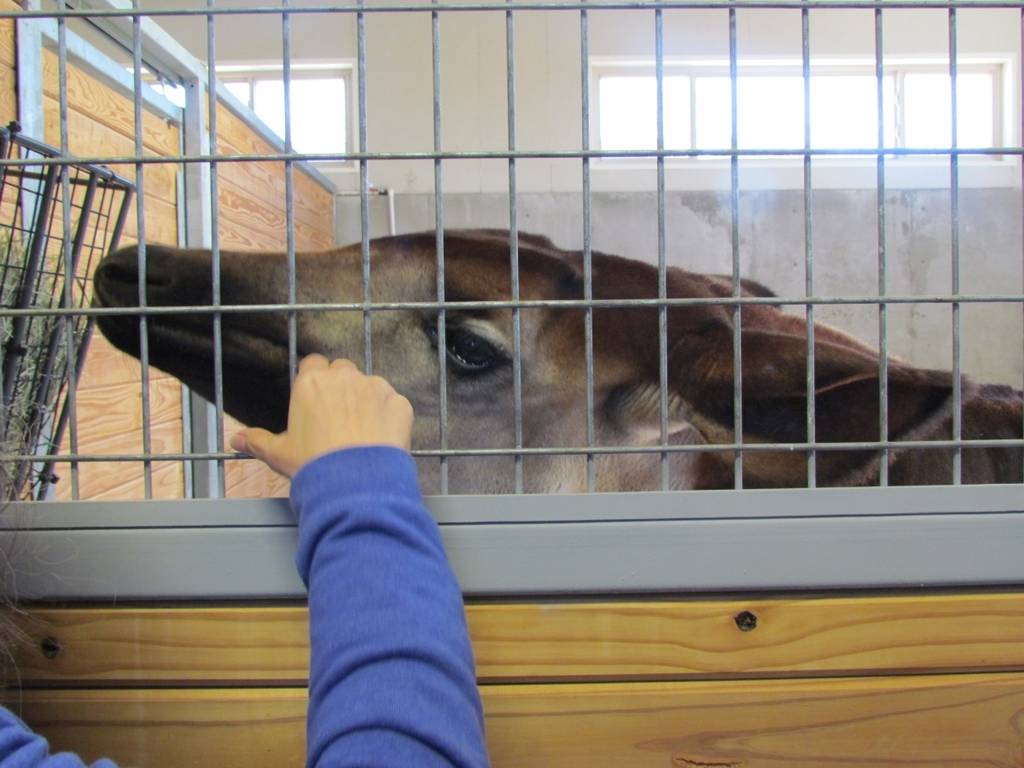 We moved into the enclosure area, and Robert explained all of the facility additions that were required, to be able to properly care for these elusive animals. Since we were passing the other enclosures, he also told us about how they care for pregnant giraffes. Tanganyika has had great success breeding these creatures, and has one expecting soon. We discussed all of the recent online hype about another expecting giraffe mother. Robert told us that it is always difficult to pinpoint a due date with any accuracy, so they just go with the notion of prepare for it, but let nature take its course. That seemed pretty logical to us. We approached the two pens that are used for the Okapi. We were to meet Amaranta, who was in his pen, but staying back aways. Upon seeing Robert, he moved forward. We had been told about how skittish these creatures are, and were surprised when he allowed Crystal to scratch him. He seemed to quickly take a liking to her, which helped cement our experience even more. We discussed more details about the species, and then it was time for the feeding. Robert led us outside to the back of the enclosure, and then went inside to fetch Amaranta. A little slow to come out at first, but once he did peek out, he knew he was going to get a treat. Staff is very careful to watch the diets of all of the animals in their care, and Robert explained why they use romaine lettuce for the hand feeding. Robert demonstrated how to feed Amaranta, and then we each took our turns. The relationship to a giraffe was apparent when Amaranta wrapped it’s 12 inch tongue around each leaf. Crystal was in awe of how velvety the hair is on the Okapi, and she continued to pet him, while we finished feeding the last of the lettuce. Of all of our zoo experiences, this one far exceeded all of the others. I have to admit I felt a little giddy after getting this opportunity. Our visit to Tanganyika Wildlife Park will be one of those memories we will look back on for years to come. Isn’t it time for you to have your own up close experience with these beautiful animals?

*We would like to thank the staff at Tanganyika Wildlife Park for sponsoring our visit. As always, all opinions are our own.