As I sit and write this article, we are currently under self-imposed isolation called “social distancing”. While the subject is near and dear to everyone at this stage, I have to wonder what readers will think when they return to this particular article in two or three years. How will our daily interactions change, once this quarantine period ends? We are only a couple of weeks in and people are already becoming anxious to return to some semblance of normal life. Knowing that we wanted to limit human interaction, we chose a day trip to Ha Ha Tonka State Park. This excursion would allow us to enjoy some sunshine and social distancing at the same time.

Ha Ha Tonka is located at the southern tip of the Lake of the Ozarks. While mention of this place can be traced back to the early 1800s, it is certain that Native Indians visited the area long before that. The park is filled with unique geological formations, which can be accessed by a series of trails. Our first stop was at the visitor’s center, which was closed due to the CoronoVirus pandemic. Fortunately, the staff had previously filled the station with plenty of park maps. We took a minute to film a quick video, before heading to our first trail. Our plans for the day included stopping back by this area for a picnic lunch. 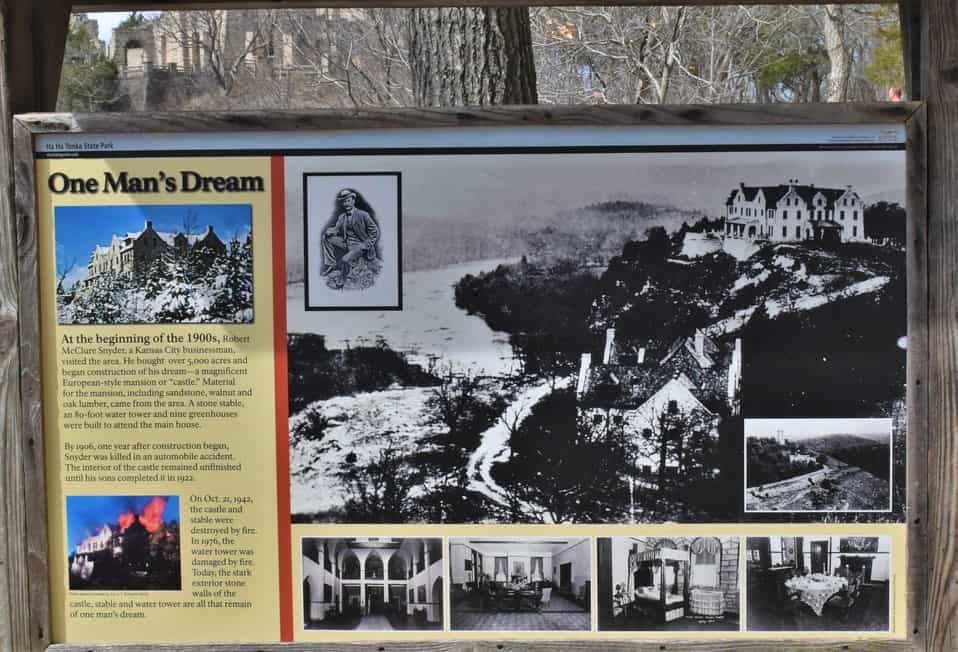 If You Build It, They Will Come

One of the notable manmade structures is Ha Ha Tonka Castle. In the early 1900s, Robert Snyder visited the area from his home in Kansas City. He was so enamored with the raw beauty of the land that he began buying up parcels. His plan was to construct a European-style castle that would become his private retreat. The plans included 60 rooms with a central atrium that spanned three and a half stories. There would be a water tower, greenhouses, and stables to supply provisions for Snyder and his family. Local sandstone was readily available from the cliffs below. Construction began in 1905 but came to a screeching halt at the untimely death of Snyder in one of Missouri’s first automobile accidents. Access to the castle is made by a paved trail that begins in a parking lot nearby. After a few rainy days, we had struck upon a sunny and warm change. Our idea of getting some sunshine and social distancing was not unique to us. We saw other couples and small family groups doing the same thing. In a world filled with apprehension, it was quietly uncomfortable to pass people along the trail. Gone were the passing niceties and warm wishes. These were replaced with stray glances and obvious separation. There would be no group conversations about the weather or the landscape, as everyone kept to themselves. With a winter of complacency under our belts, we were thankful for this opportunity to commune with nature. This first hike was easy with only a slight incline. We made our way around Ha Ha Tonka Castle but noticed that each group would take their turn at a specific viewpoint. There was no crowding, no rushing, and no close lines. As I looked around, I noticed that each group stayed together even to the point of corralling their children in tight formation.

Snyder’s sons had taken up the mantle of completing the construction, and it was finished in 1922. They scaled back dramatically from their father’s vision. After a few years of residing in the castle, the family leased it out as a hotel. Sparks from a chimney started a fire on the roof, which destroyed the structure in 1942. Checking Out the Geological Formations

After taking in some of the views from high on top of the bluff, we followed one of the wooden boardwalk trails to the remains of the water tower. This too had been destroyed by fire, but at a much later date and by vandals. A short drive back down the hill brought us to a turnoff for another unique sight. While Missouri is not the only place that you can find Karst landscapes, it does feature an amazing amount of caves, sinkholes, and natural bridges. Of course, we have visited many other caves, like this one in Dubuque, Iowa. Natural bridges are a little rarer to find, especially one that is so easily accessible. Passing under it leads hikers to the “Colosseum”, which is a sinkhole 500 feet long and up to 300 feet wide.

While the rains had ended a couple of days ago, groundwater was still leeching from the ridge above. It must surely be a small waterfall during and shortly after a rain event. By the time we visited, it was a steady group of drips that splashed down on the rocks below. We stood watching and listening to the stillness of this valley. The huge sinkhole resulted from a collapsed cave. Now we stood surrounded by sheer cliffs that rose around us. According to legend, this spot was used for tribal meetings and church revivals. We passed a short distance down the trail but found that it led to an abrupt halt due to muddy conditions. Not wanting to destroy nature or our shoes, we chose to turn back. As we approached the bridge, we noticed another couple coming down the trail. There was another one of those awkward moments, where we all wondered what was the appropriate protocol. Lessons like this had never been taught as this type of situation was foreign to us. We chose to remain at a safe distance and relish in the sunshine and social distancing that had been prescribed. Once the other couple passed, we made our way back up the trail to our car. Moving farther into the park , we came to Tonka Spring Road. Here we found ourselves at the base of the cliff that holds Ha Ha Tonka Castle. As we made our way down a wide paved path, we could see the ruins above us. Perched on the 250-foot tall bluff it must have provided amazing views during its heyday. We hiked the boardwalk trail to the beginning of Ha Ha Tonka Spring. Along the way, we passed the remnants of an old gristmill. A grinding stone sits nearly half-buried along the water’s edge. The path to the spring is easy, but for those looking for a challenge, it is awaiting you there. Those brave souls interested can scale the 316 steps, which ascend 200 feet up the cliff to the Dell Rim Trail. We decided to pass.

Our interest had been piqued by the sight of rapids on the opposite side of a small island. We made our way over a small bridge and found ourselves deposited at the base of a steep hillside. Rough steps had been carved out, so we began our trip up. While it was strenuous, the climb was not overly long. Once on top, it immediately dropped back down to the other side. Here we found the spring waters rushing down rapids into the lake below. We took this opportunity to rest on the rocks overlooking the rapids. High above, eagles soared over the bluff riding the currents of warm air. As we sat there alone, we soaked in the sunshine and social distancing that we had sought out. Perhaps this period of self-induced isolation would be manageable. Looking out across the lake, we spotted a group of kayakers paddling nearby. Our discussion migrated toward other outdoor adventures that we could enjoy in partial isolation. For a few years, we have discussed the idea of a float trip. That in itself is designed to be a journey of self-sufficiency. Our one concern would be how we would get to the drop-off point since they are usually hauling a larger party. This would be something that we could research further if this quarantine period extends into the summer months. With our internal batteries recharged, it was time to begin the journey home. Our visit to Ha Ha Tonka State Park had provided us exactly what we were looking for. A chance to get out of the house in a way that allowed us to remain at a safe distance from others. Even though we had been in the presence of other hikers, it seemed that everyone had the same goal in mind. The unending news stories had painted a picture of people completely ignoring all idea of distancing, but that was not the experience that we had found. Even a few short conversations we had been in during the day were done at more than a safe distance. With the whole outdoors to use as a buffer, it seems that people had no problem keeping their distance. We are not suggesting that each and every one of you partake in this type of activity, especially during this odd moment in time. Our goal was simply to remind you that it is important to balance sunshine and social distancing. Perhaps you just need to step out into your backyard for a while. A short stroll around the block may be enough, as long as you remember to keep your distance from non-family members. While isolating ourselves will help slow the spread of this pandemic, we also need to be aware of our physical and mental health. A good dose of vitamin D, along with some fresh air, will help us keep our immune system running better. In the end, we hope that this will end with a vaccine that prevents others from suffering, but in the meantime please be safe!

Share with someone who needs Sunshine and Social Distancing!