Who’s up for a little time traveling? A visit to Abilene, Kansas can take you back to the early 1900s just by touring the Seelye Mansion. This turn-of-the-century home has 25 rooms and more than a few fascinating features. One fact that surprised us was that the furnishings cost more than the home, which was built in 1905. In 2022, it’s unusual to find a place that still has the original appliances and electrical components. As we toured this massive house, we felt like we were in a living time capsule.

We want to thank Travel Kansas and Visit Abilene for hosting our visit. Rest assured all opinions are our own. Dr. Alfred Seelye made his fortunes through patent medicine. This was during the days of the “snake oil” salesman when cure-alls were commonplace. Seeyle attempted to bring a business angle to the business by focusing on production, marketing, and distribution. In 1890, Alfred moved from Illinois to Abilene, where he set up his laboratory. Within a few years, he had at least 100 products on the market. With ever-increasing success, his company grew to have over 300 employees. To boost sales, he offered a free “health guide”, which contained, recipes, weather predictions, and plenty of ads for his various products. In 1893, Alfred married Jeanette Taylor and the couple would raise two daughters, Helen Ruth and Mary Eleanor. It’s All In the Details

With money being no concern, he spared no expense when it was time to build the family home. The 11,000-square-foot structure contains 25 rooms. It is filled with Edison light fixtures, a ballroom, a music room, and a Tiffany-designed fireplace. How would you choose to furnish such a grand structure? Albert purchased the majority of the pieces at the 1904 World’s Fair, in St. Louis. By the time it was completely decorated, the family had spent more on the accessories than on the house. Abilene is also home to Dwight Eisenhower, who lived on the “wrong side of the tracks” that run through the middle of the city. As a youth, Dwight delivered ice to the home, but the daughters still saw him as lower on the social ladder. Travel Back Over 100 Years

All of the special touches were already in place by the time the family moved into their new home. How amazing that must have been to the daughters. We can imagine the joy of exploring a fully furnished home on such an immense scale. Throughout the home, we found reminders of the family that has been kept by the current owner. In the 1920s, Frank Lloyd Wright helped with a few interior renovations. After Dr. Seelye and his wife had passed, the daughters remained in the house. The current owner, Terry Tietjens, purchased the Seelye Mansion in 1981, which he shared with the sisters. He told us stories about how the home had fallen into disrepair and his desire to bring it back to its original condition. Along the way, he had to balance his desire with getting the sisters to buy into his vision. The work of returning the home to its previous glory was not easy. The sisters had slowly been selling off furniture and fixtures to cover costs. Terry had to run down these items and bring them back. After agreeing to purchase the home, a fire in the elevator shaft caused considerable damage. Even with this setback, he went through with the purchase. Living with the sisters wasn’t all tea and crumpets. Often he would have to convince them to all the renovations to take place. Even something as simple as television was looked upon suspiciously by the sisters. When they were all together in the home, he made fast friends with the ladies. 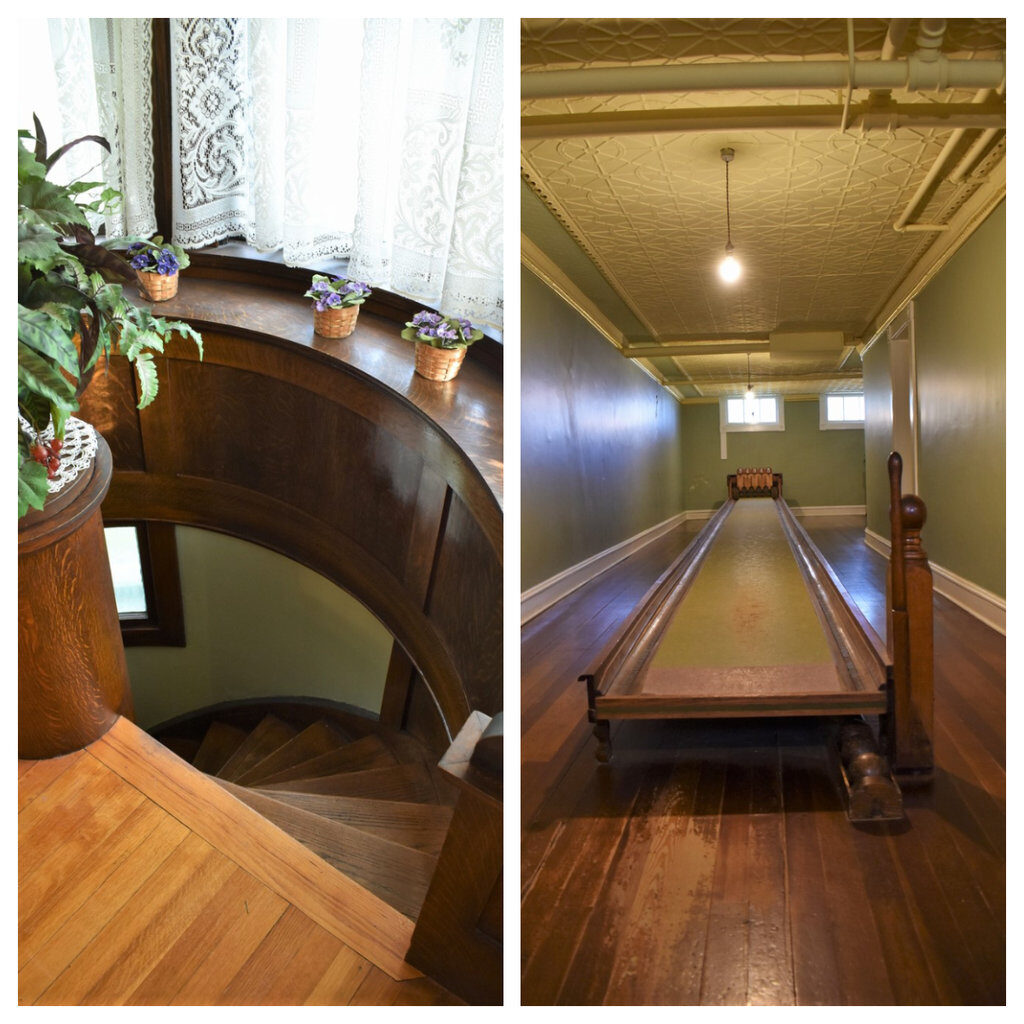 After touring the upper floors, we didn’t see how there could be any additional surprises, but we were mistaken. A small spiral staircase is set in a corner and leads down to the basement. We assumed we’d find a storm/root cellar combination, which would have been used for storage and inclement weather. There was no way we would have expected to discover a bowling alley. The version found downstairs was constructed by the American Box Ball Co. from Indianapolis. It includes an automatic ball return, as well as a lever that resets the pins. We were told that the Seelye Mansion was basically built around this special feature. We love exploring these hidden gems that dot the land. Abilene, Kansas has a solid reputation for being one of the best small towns for tourists. The Seelye Mansion is just one of many attractions to be found in this city that can trace its roots to the Wild West. It’s interesting to find a destination that has such a wide range of subjects, so everyone in the family will find something of interest. If you are looking for a great weekend getaway, Abilene has got you covered. Happy travels!