Visiting zoos in the Midwest during the winter can be a hit or miss activity. During our day trip to Manhattan, Kansas, we decided to drop in to the Sunset Zoo to see who was enjoying an unusually pleasant sunny day. This smaller zoological park is perfect for a shorter visit, and the lower admission cost makes it an affordable option. We arrived after lunch, so we had the warmest hours of the day to enjoy a visit. Lets see who was taking in some sunshine.

We want to thank Visit Manhattan and Sunset Zoo for their hospitality. Rest assured that all opinions are our own. Should I Stay or Should I Go Now

The chimpanzee house was filled with specimens primping and preening each other. They all seemed content on staying indoors in the comfort of a controlled climate. We watched for a few minutes, and then noticed the doorway to the outer exhibit was open. We wondered if any were braving the cool breeze to soak up a little sunshine. Sure enough, there was one brave soul who was more interested in being outside than in. He seemed content just to soak up some rays, so after a couple of minutes we left him to his thoughts.

I’m not featuring the photos in the order that we found the displays, so when you visit you will find the layout will produce different results. The gibbons were also split on where they wanted to spend their day. One was more than satisfied indoors, and seemed to relish having the entire area to himself. He was swinging and hopping between the various platforms, which delighted the small crowd that had assembled. On the outside, we found a mother with her not so small child nestled at the top of the display. Sunset Zoo has this area set up so that as we made our way around the building, we climbed a hill that put us on the same level as the second story platform. This allowed us great viewing opportunities on both sides of the exhibit. 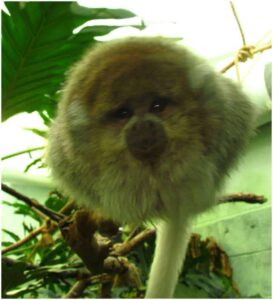 The only other creature with prehensile tails, that were on exhibit, were the Bolivian Reed Titi Monkeys. These South American primates are little balls of energy, and hard to photograph. Every time I tried, they would dart around or made sudden movements. This is about as clear as I could get, and only because it was curious about the camera lens. Perhaps one of you have a better picture from your visit. We would love to see it.

One of the biggest surprises for us, was that the flamingos were out. Even though the weather was near 60 degrees, we never expected to see a Caribbean bird being so active. While some were preening and resting, others were busy feeding or at least seining the water for a potential meal.

When we arrived at the display, we were alone. Soon we were joined by a family that included some younger guests. These seemed to create some excitement with the flamingos, and they called out warnings to each other about this potential danger.

A large open pen holds a group of animals more suited for Midwestern weather. The prairie dogs were out and active during our visit. Of course, they were still cautious whenever anyone got too close or moved too quickly. This gave us a reason to slow down and just enjoy our break from Old Man Winter’s icy grip. Eyes to the Skies

We watched the prairie dogs scamper around for a bit, and then started back on our exploration. The large elevated bear sculpture is a good focal point for radiating out toward the different areas of exhibits. The Sunset Zoo is an older zoo, that we guess was added in sections. This makes it a little disjointed, but adds an element of surprise when we would happen upon an area we had overlooked. The total footprint of the Sunset Zoo is not large, but there are some hills to be negotiated. 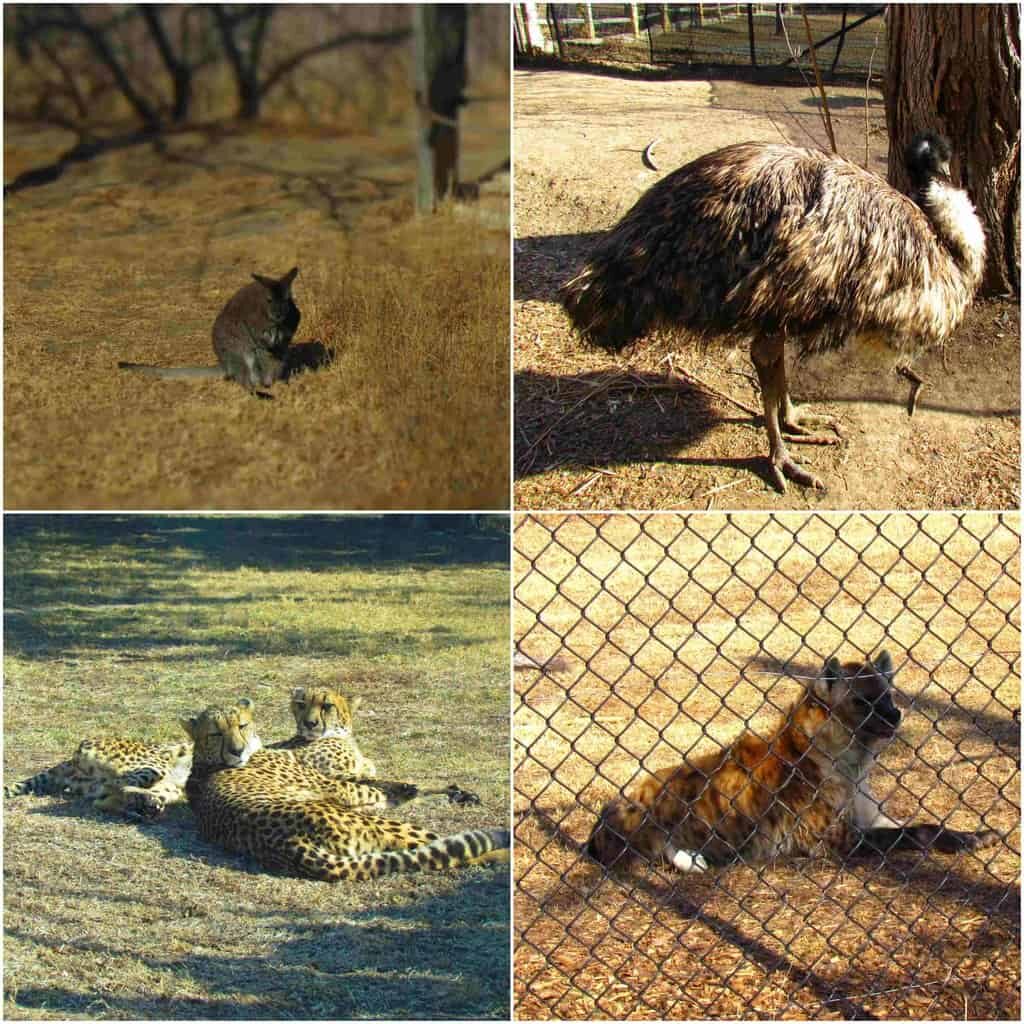 Up Close and Personal

We made our way down toward the Australian area, even though it is a mix of two continents. A few wallabies were hanging out in the sun, and keeping a watchful eye on a staff member who was tidying up in their yard. We were surprised at how close of views the exhibits offer. We were merely a few feet from the animals, and they seemed quite calm about it. (Certainly calmer than us.) As we walked along the emu exhibit, they strutted alongside almost step-to-step with us. As we worked back toward the the bear statue, we passed a hyena who was preoccupied with something I couldn’t see. Nearby, two cheetahs lazily lounged in the waning sunlight. As we worked our way down a ridge, we came across a leopard who was intently watching the tigers in the area across from him. He would pace a little, and then crouch to see them. When one of the tigers began calling out, it didn’t take long for the leopard to return the gesture. It was interesting to watch the interaction between the species.

We began making our way back toward the front of the zoo, when we happened across a pair of peacocks strutting along the walk. We watched as they crossed into a nearby field and started pecking around. A familiar cry told us there was another male nearby, and soon we spotted him on a nearby roof. These two were not unaware of him either.

Soon these two decided to reply to the call, and issue their own. While we waited for one to show their feathers, neither seemed in the mood. I guess without a hen nearby it just wasn’t worth the effort. As we made our way back to the car, we both felt that the Sunset Zoo was worth the visit, even on a sunny winter day. Have you ever visited the Sunset Zoo in Manhattan, Kansas?