Why We Enjoy Places Like Miami County Historical Museum

Why We Enjoy Places Like Miami County Historical Museum

There are varying opinions on the amount of enjoyment one can get from visiting a localized history museum. Some shy away from them, believing that they are dull and boring. Others, like ourselves, find that there are a multitude of personal stories just waiting to be uncovered. In Paola, Kansas we visited the Miami County Historical Museum to see and hear some of these local stories for ourselves. Please be aware that the museum is open during weekdays, but will make arrangements to have someone there on Saturdays by appointment.

We want to thank the Miami County Historical Museum for their hospitality. Rest assured that all opinions are our own. Lay of the Land

We arrived at the start of the day, and were welcomed by staff. Jim would be our guide and began with an overview of their spaces. After a quick walk-through, we came back to the entry point. The front room is lined with a historical timeline. The story line begins with the Native Americans who first occupied the lands. For each picture on the chart, there is a placard with background information. This allows visitors to march through time with the same perspective as many of the local residents had at that time.

The timeline wraps completely around the front room, so it takes a while to absorb it all. Some of the pictures relate to people who’s actions had a direct or even indirect effect on the poeple of Miami County. The Bleeding Kansas period has a significant presence in the timeline. It Pays To See It All

It pays to check out all of the pictures, since you never know what the next one will bring. We were quite surprised to find this one of Abraham Ellis, who lived the latter part of his life with a bullet hole in his head. Apparently, this was provided to him by an errant shot from William Quantrill during a Bushwhacker raid. Upon entering the room that Ellis occupied, Quantrill was noted to have said “You are not the kind of man I was looking for. I’m damned sorry.” It should be noted that the two had met when Ellis issued Quantrill a teaching certificate. As we made our way along the timeline, we found a series of cases and artifacts lining the wall below the pictures. Many of these are items that would have been common sights during various periods in the area’s history. A ball and chain would have been used to secure prisoners at night, to prevent escape. Another part of this display focuses on John Smith. The man with a most common name was the first wine maker in Miami County. In 1869, he established his vineyard near Paola. This would prosper until 1881 when prohibition would force him to shutter the business. Many personal items are also included in the displays, which help make the exhibits easier to relate to our own lives. Sports have been a recreational activity for generations, and baseball has been a popular pastime in the Midwest for decades. Of course, sports wasn’t the only form of entertainment for local residents. The Patterson Circus was a traveling show that performed in towns all around the Midwest during the early 1900’s. They chose Paola as their winter quarters, which offered a unique opportunity for the citizens to see the performers as they lived away from the ring. It also brought a menagerie of  exotic animals to town. We moved out of the main room and into one of the three other galleries. This one focused on the participation of Miami County residents in various war efforts through modern times. The artifacts are a collection of personal effects from those who served. There are also a few tools and pieces of equipment that would have been used by those who served. The next gallery we entered offered a collection of items that would have been common in most households through the early and middle 1900’s. Some of the pieces were familiar to us. Others left us scratching our heads in wonder of what job they were created to fulfill. We enjoy trying to guess the purpose of such implements, and it can often evoke hilarious descriptions. Many of the pieces hold fond memories from our youth, when we spent time with our grandparents. It is a little thought provoking to imagine how quickly technology has advanced in the last few decades. 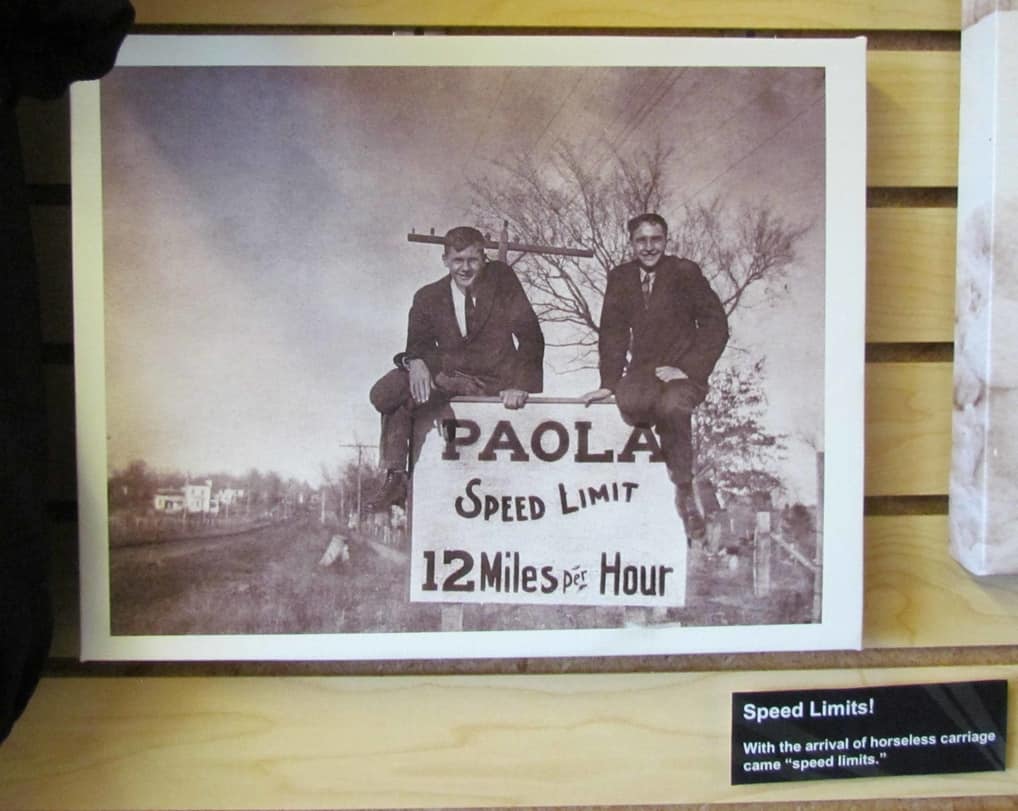 The requirement of paying close attention helped us spot this interesting photo amid a busy display. This comes from the early days of automobile traffic and elicited a chuckle. We had to wonder just how they would have enforced such a specific speed limit prior to the age of radar guns. Then again, maybe most vehicles were lucky to drive much faster than 12 miles per hour anyway. The final gallery we visited focused primarily on the people who have called Miami County their home, as well as their cultures. The Native Indians inhabited the land prior to the arrival of European trappers and Eastern pioneers. When we first entered the area, we saw the floor-to-ceiling mural that depicts a peaceful scene along the banks of Osage River. The area has been home to various tribes including; Miamis, Potawatomie, Shawnee, Weas, Piakeshaws, Peorias, and Kaskaskias. The last four were part of the Confederated Tribes who were moved here from Illinois. Many years ago, we learned about the Trail of Tears that was the forced removal of native tribes from the southeast portion of the country. A lesser publicized, but just as heinous event occurred with the Potawatomie Tribe from Indiana territory. In 1838, the militia removed the tribe and forced them to march to reservation lands in Miami County. The map above shows the campsites along the path of their journey. More than 40 persons, mostly children, died during the forced march.

A large section of the gallery is dedicated to the American Indians who have called Miami County home. The lineage of chiefs is an interesting display that include leaders of the various tribes. There are also artifacts associated with the missionaries who served the people of the reservations. Paola paid tribute to these Native Americans by naming many of the streets after the tribes. The name of the city is actually derived from the Indian pronunciation of the word Peoria. This was done in honor of Baptiste Peoria, who was a primary landholder in the area. The town was built around a square that was given by the Tribal Council, with the condition that the square never have a building on it. To this day, the square still serves the community as a park. We drove around the square, before we left town to see this monument to the people who time has mostly forgotten. Prior to leaving, we thanked the staff for all of their assistance. The knowledge of the area’s past is a precious treasure that they happily shared with us. This is one of the main reasons we enjoy visiting places like the Miami County Historical Museum. What are some of your favorite museums?

Make your own history by sharing this with your friends!